OnePlus may have somewhat of a Midas touch in the Indian smartphone market, but its maiden foray in the TV space last year was met with lacklustre response. The 2019 Q1 and Q1 Pro QLED TVs had a lot going for them, but their premium pricing kept them out of the hands of most customers. Credit where it’s due, OnePlus has listened to customer feedback and gone back to the drawing board for its 2020 TV lineup to not only address the pricing concerns but also fix a bunch of niggles folks like me had with the first-generation product. The result – two new affordable TVs in the Y series, a 32-inch HD TV and a 43-inch full HD TV, and the big-screen star, the 55-inch OnePlus 55U1 4K TV, which I have for review today. This TV goes up against offerings from Xiaomi and Vu but is it enough to make the dent OnePlus intends. Let’s dive right in.

Straight up, one has to acknowledge the stunning design language OnePlus has used for the 55U1. It’s gone all the way down to 6mm at the top and the sides of the gunmetal finish aluminium chassis, which for context is thinner than OnePlus’ 8 Pro flagship, although the bottom third widens up to accommodate the internal components and ports for connectivity (and there’s a removable cover to hide the ports, should you want). The lower section is covered with a distinctive carbon fibre pattern one has come to associate with OnePlus cases, and the overall effect is equal parts classy and premium looking and a standout in this price segment. Interestingly, the design looks far more modern and appealing than last year’s Q1 Pro – gone is the spine and shiny chrome base on which the TV was mounted. In its place, you have two stylish looking brushed metal feet on either side of the TV, which give the heavy 55U1 some much-needed stability. Keep in mind that these feet attach at the far ends, so they demand a footprint almost as wide as the TV. 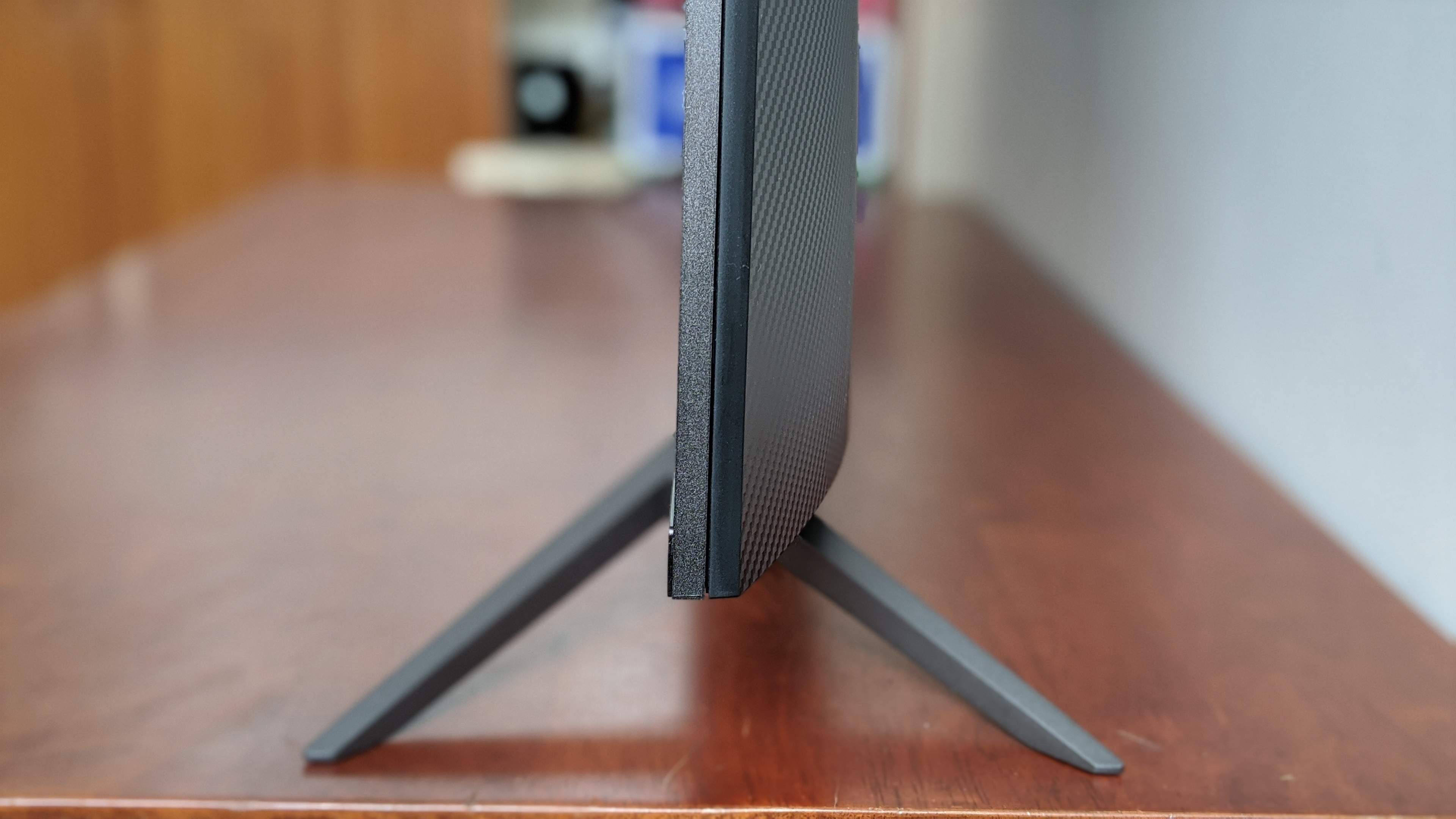 The clean, unobstructed design (OnePlus calls it “burdenless”) extends to the front, with the narrowest, almost non-existent bezels surrounding the top and sides of the 55-inch 4K LED panel for a 95 per cent screen-to-body ratio that looks stunning no matter where you place the TV. The panel itself ticks off all the major boxes – this is an Ultra HD (3840x2160 pixel) LED-backlit VA panel with a high 93% DCI-P3 colour gamut (range of colours it can display) and support for HDR10+, HLG and Dolby Vision content. OnePlus tacks on a Gamma Engine and MEMC (motion estimation motion compensation) for clearer images and smoother video, so even if your playback source isn’t up to scratch, the TV will still amp up the visuals, particular while watching sports. 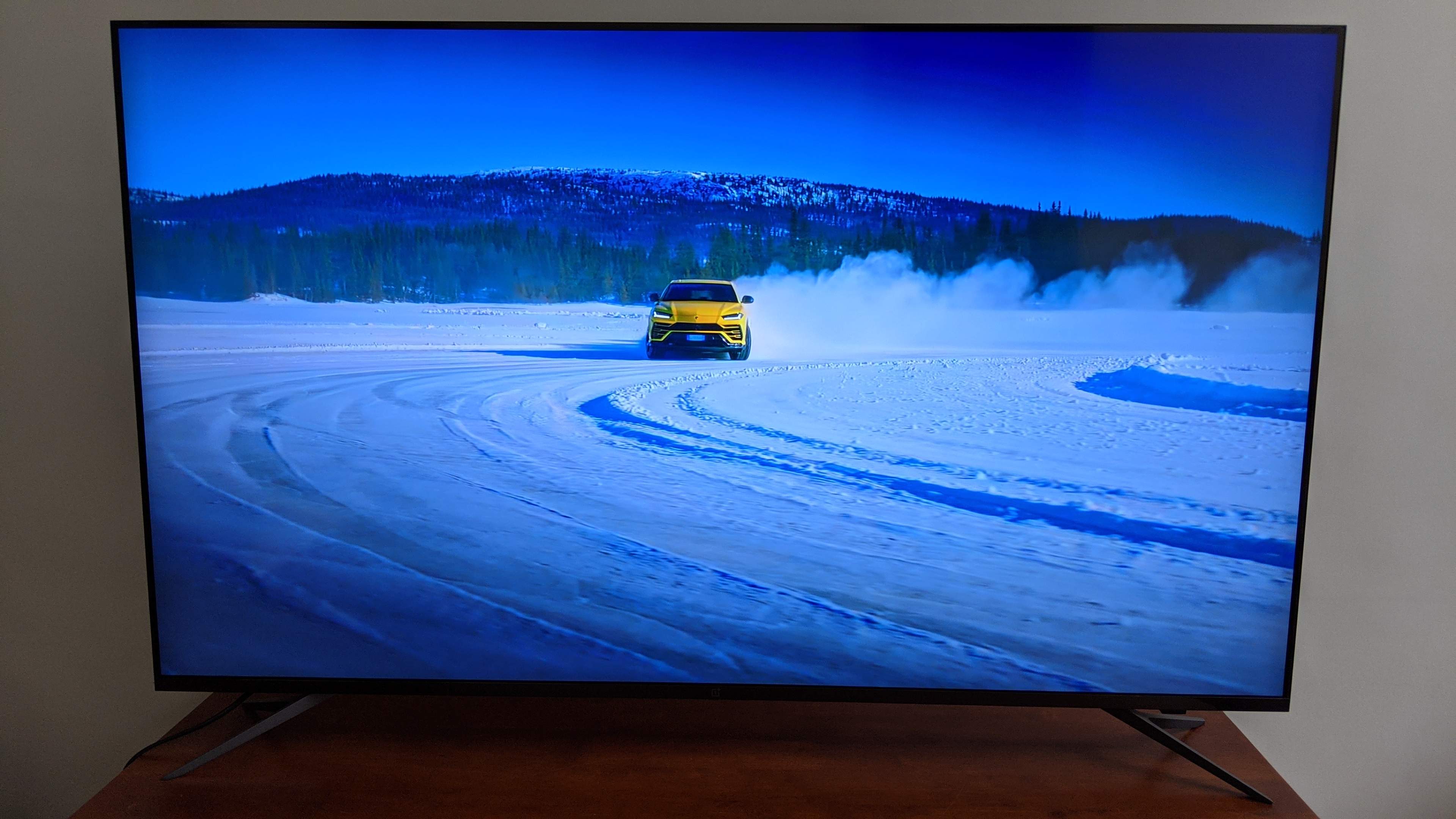 The alphabet soup of acronyms translates into excellent colours and great contrast levels, no matter whether you use it for watching 4K HDR content on Netflix or Prime Video or upscaling full HD content using older Fire TV Stick or Apple TV (the latter was hard to discern some times, it was that good!). Watching the Dolby Vision-enabled ‘Our Planet’ on Netflix, for example, is a visually rewarding experience, with clean pictures sans any over-sharpening and excellent handling of contrast levels across the scene. What’s also visible is that the quality of the panel and the tuning is a notch above the Xiaomi 55-inch 4K model, though you are paying a pretty premium for that improvement (more on that later). The one noticeable issue that stayed with me was that while watching shows with darker scenes – the final season of Game of Thrones, for example, the blacks were never close to true blacks, which led to this somewhat unsettling dark grey colour palette. Granted, it is somewhat of a limitation of the technology and the QLED panel on the higher end Q1 handles this better, but I expected more from the colour management and tuning on the 55U1 as well.

On the audio side of things, the 55U1 has a 30W four-speaker setup (two full-range and two downward-firing tweeters) with support for Dolby Atmos audio. Granted, the thin design of the TV allows for only so much flexibility and space for bigger drivers, but the TV lacks in audio output overall – the bass response was a tad weak and muddy, and audio often went unheard in frenetic, action-packed scenes. You’ll want to budget for a soundbar or connect this to a bigger speaker setup to truly enjoy the experience. OnePlus gives you many ways to control the 55U1, starting with the remote which honestly looks like the lovechild of the first generation Q1 remote and the newer Netflix remote which came later. You get dedicated buttons for Netflix and Prime Video, volume controls and a mute button (hallelujah!), launcher buttons for Oxygen Play (OnePlus’ curated-content home screen) and Android TV home screens, plus a D-pad for navigation. The remote is light and gets the job done, but I found it plasticky and less than premium in the hand. You also get control via the OnePlus Connect app for Android and iOS devices, so you can use your smartphones – up to 5 of them – as remotes and cast sources for the TV. Of course, there is Google Assistant and Chromecast built-in, and even Alexa support if you lean the Amazon way. 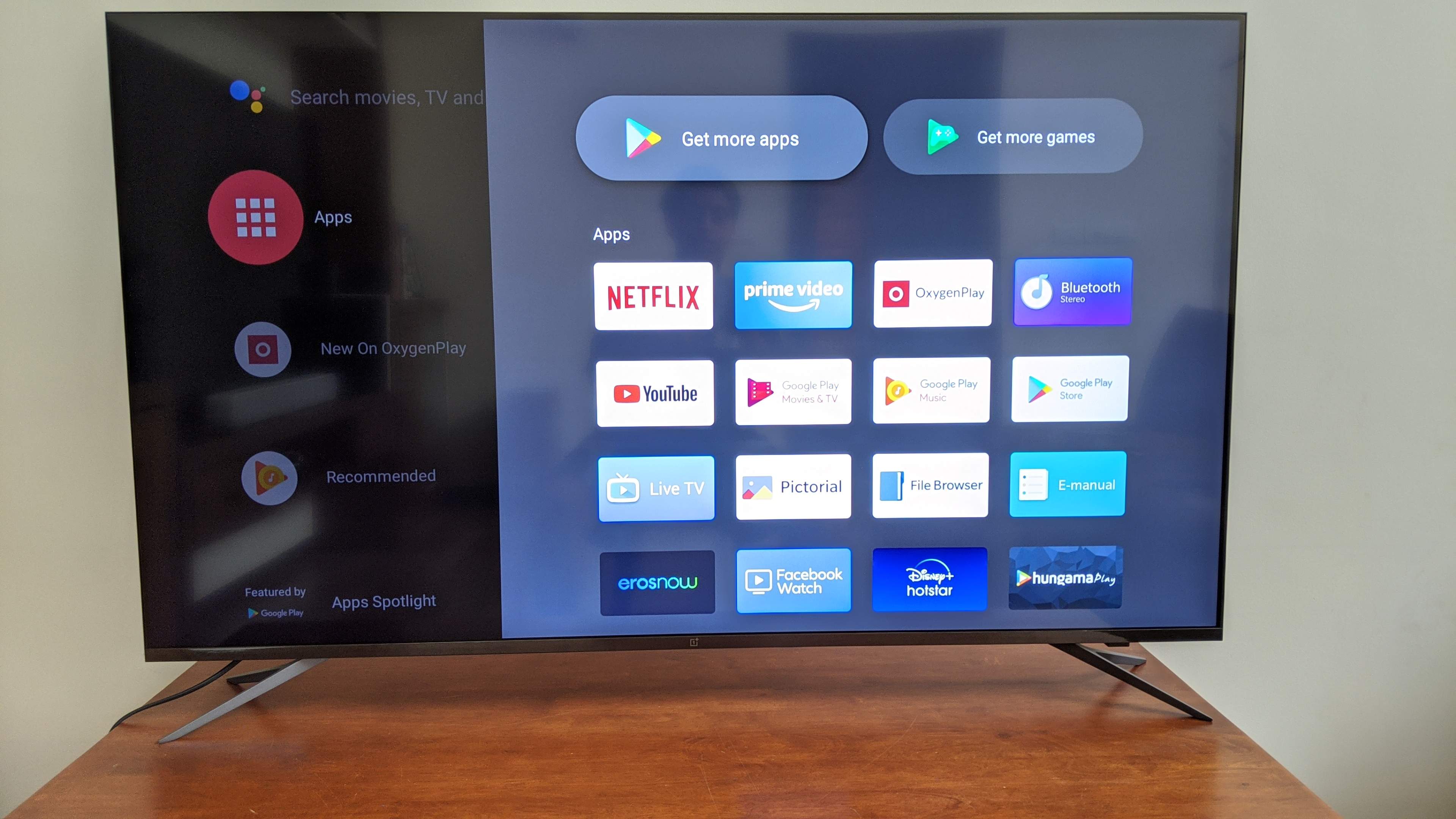 In day-to-day use, the Android TV 9.0 platform runs swimmingly well on the 55U1, and the TV runs the same MediaTek chip with 3GB of RAM and 16GB storage as the pricier Q1 series. What’s good is that OnePlus has ironed out a lot of the software bugs that plagued the Q1 series, and using the TV is a lot more refined an experience compared to the rough edges on the Q1. You get the modern accoutrements like a Data Saver mode (limit data consumption by lowering video resolution etc) and a Kids Mode to set time limits or control access to apps. This TV is, like OnePlus phones, made better with thoughtful software additions without the bloatware creep.

Finally, the minimalist design on the 55U1 doesn’t scrimp on connectivity options – three HDMI 2.0 ports (including 1 with ARC), one USB 2.0 and USB 3.0 port each, optical audio out, wired Ethernet, AV Composite and an RF connector, plus the usual complement of wireless connectivity – WiFi, Bluetooth, DLNA. The notable omission is the 3.5mm audio jack – the TV team got the phone team’s memo, I guess.

But really, the question to answer at this point is – who does it go up against? Hitting the 50,000-price point for the 55U1 means you can save quite a bit of cash by opting for the Mi TV 4X 55 (Rs. 34,999). Sure, the audio is a bit weaker, you don’t get Dolby Vision and the panel isn’t quite as good, but that’s a serious bit of cash saved. TCL has a 55-inch C715 series model with a better QLED panel (Rs. 55,990), which you could consider as well. That said, the 55U1 gets a lot of things right – the improved design, the bump up in picture quality, the cleaner software experience (plus the Connect app) – and it should appeal to folks looking for a mid-range TV that pulls out all the stops.