If you’re reading this from just about any Tier A city in India, you know what’s headed your way in the coming months. Winter’s coming, and with it, India’s notorious pollution season, replete with higher AQI than the number of Diwali greetings you’ll see in the coming weeks. And contrary to popular opinion, staying indoors isn’t the solution either, with a deadly cocktail of cooking fumes, noxious gases, bacteria, pollen, mold spores, mites and allergens hanging around in the air you breathe. Add to it the dryness that accompanies the winter, and the increasing amounts of time we expect to continue to spend indoors in the coming months… and you realize that something like the Dyson Pure Humidify + Cool air purifier may have arrived at just the right time. 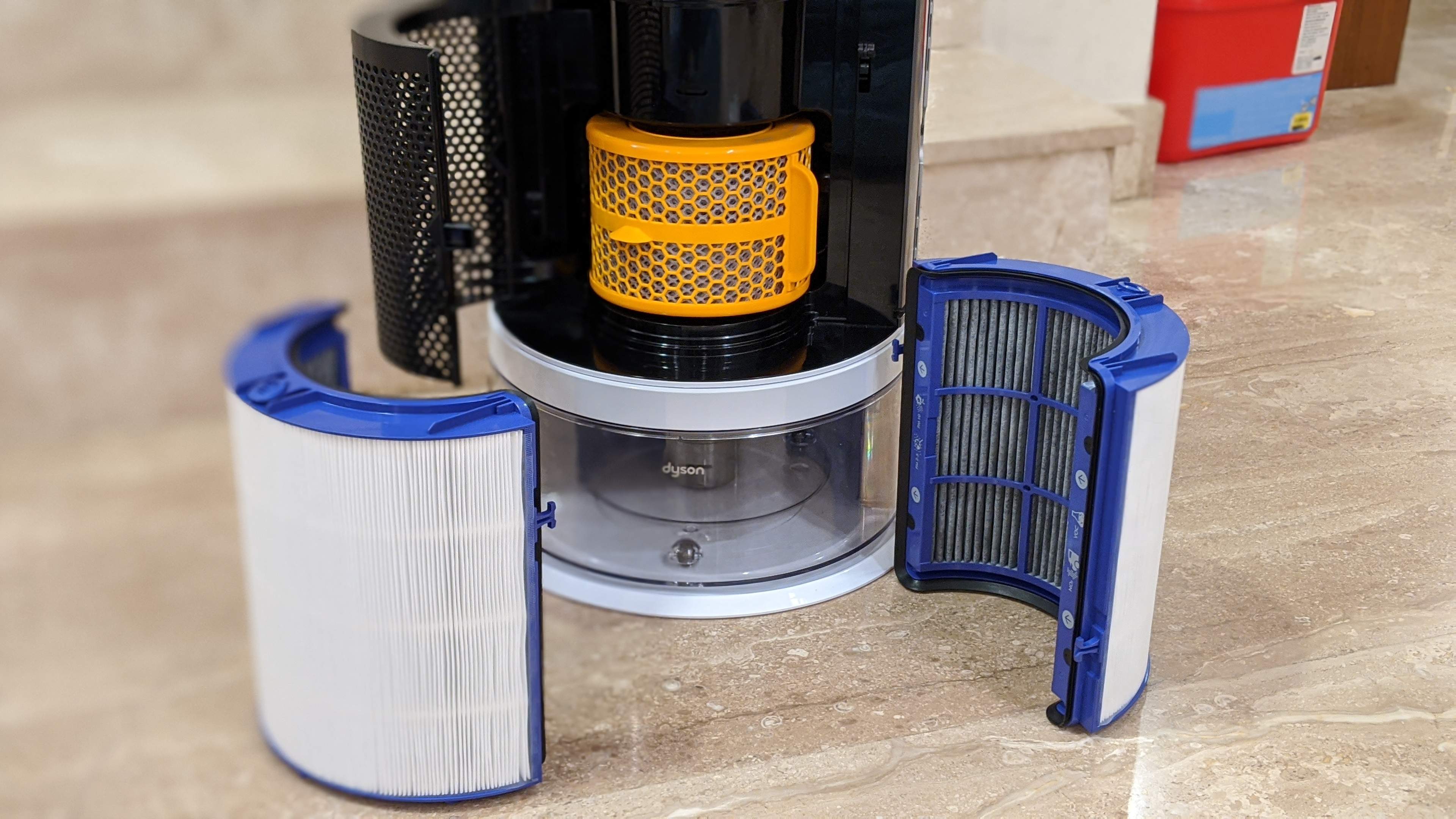 It's all in the name, really (sometimes one wishes more folks took such a functional approach to naming their products) - it purifies, humidifies and cools. As with the rest of the Dyson portfolio, dirty air is drawn in from around the base of the unit via a 360-degree air intake, and clean air is pushed through the iconic bladeless ring. In between, the air passes through two HEPA filters located on either side of the base which trap and scrub off 99.97 percent of volatile organic compounds, viruses, allergens, and other particulates as small as 0.3 microns. It retains the same design aesthetic as the rest of the lineup, but it’s shorter and pudgier, not to mention heavier, due to the large water tank at its base. Unlike its siblings though, the Pure Humidify + Cool doesn’t rotate in its base to throw air in all possible directions, due to the weight of the water tank needed for the humidification function. Instead, you can control oscillation via vertical slits that push out air at a 45-degree or a 90-degree angle, at a steady rate or at a varying rate to simulating the gentle cooling effects of a breeze. All your vital air quality stats are visible on the LCD screen, and control is via the bundled remote or via the excellent Dyson Link app. Seriously, the app is legit cool if you want to get into the weeds and analyze how the air purifier is working. Plus, there’s an Alexa skill for when you want hands-free control via Amazon's digital assistant. 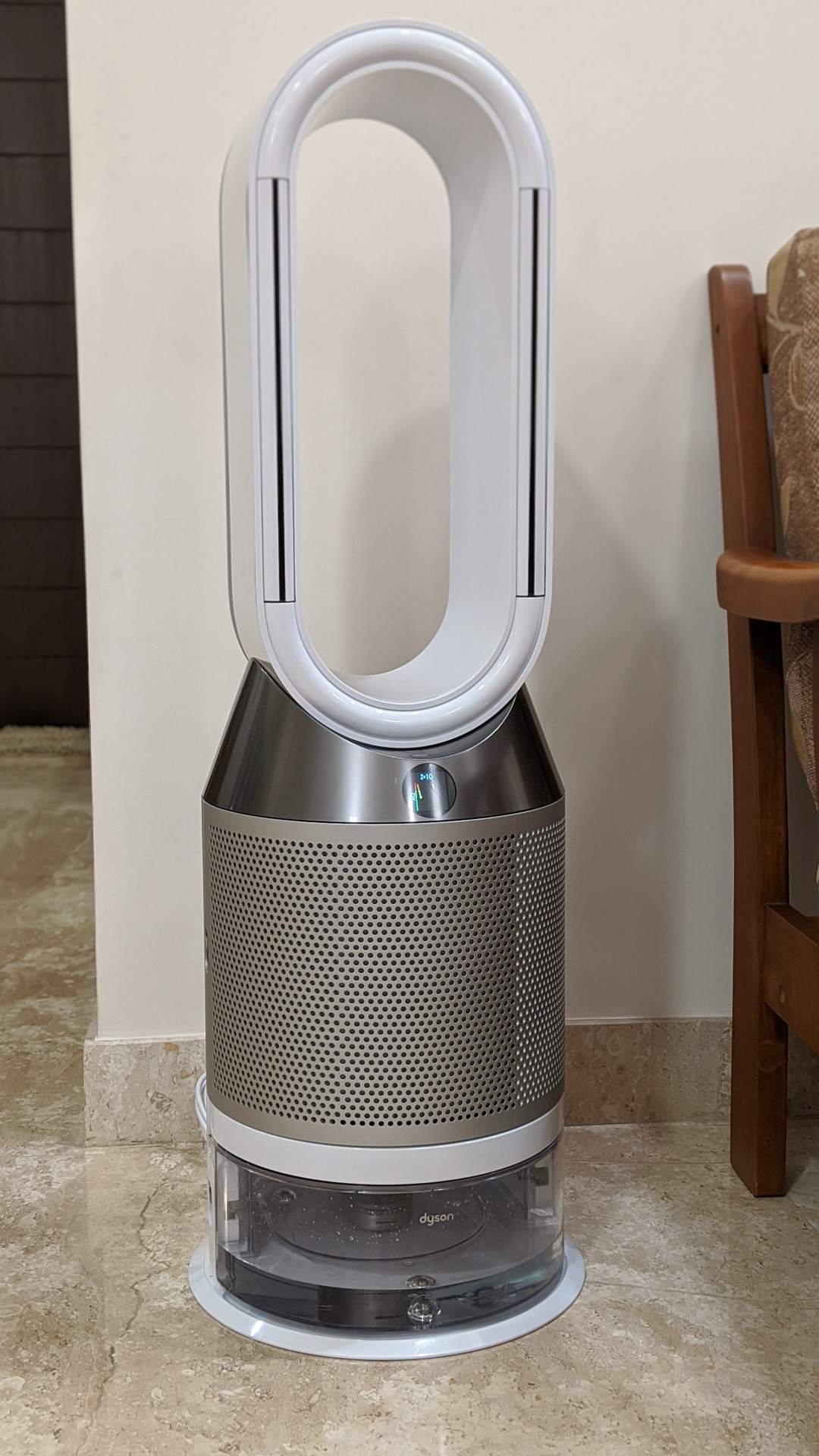 While on the subject of air purification, Dyson differs in how it measures effectiveness of the purification system. Most air purifiers are rated on their clean air delivery rate (CADR) placed in the center of a 127 square foot room (with a fan to circulate the air), but Dyson employs a POLAR test which employs a bigger 290 square foot room with the air purifier placed on one side to measure the performance of the purifier in the furthest corners of the room. The Pure Humidify + Cool delivers 320 litres of clean air per second, slightly higher than the 290 liters than the Pure Cool and Pure Hot+Cool air purifiers I’ve previously tested. 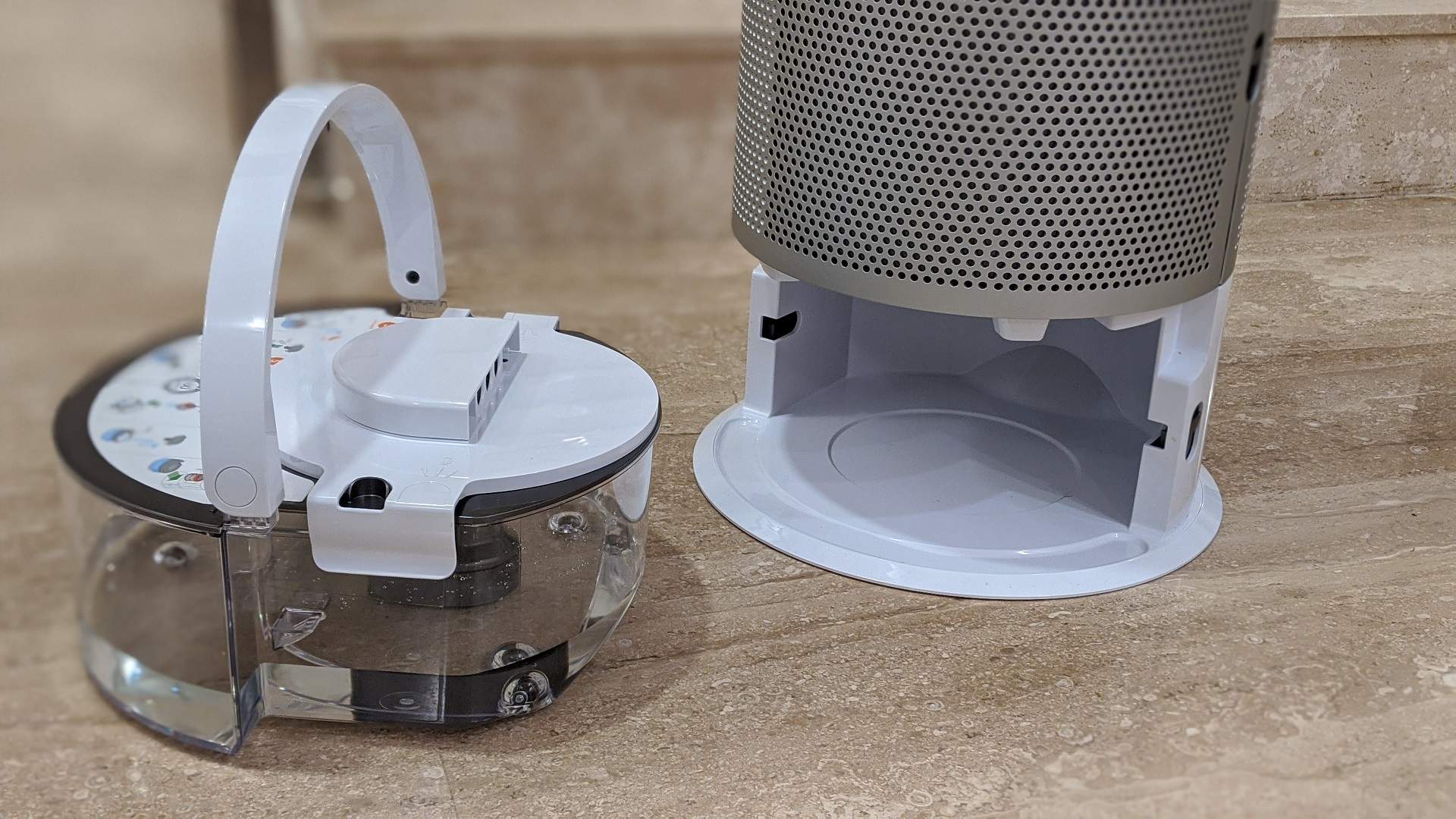 The headlining feature of the Pure Humidify + Cool is the new humidification system which, aside from the known benefits of neutralizing the harmful effects of airborne viruses in the relatively damper air, has several interesting touches to it. Pour tap water into the removable water tank (there’s a handy handle to make it easier to carry over) and Dyson uses an UV-based purification system that removes 99.9% bacteria in the water and sprays out a fine mist of clean water. You can set the unit to monitor humidity levels and local weather data and automatically adjust the humidity levels to an optimum level, or amp it up or down via manual control. Start it off for a half hour in a small room and you can instantly feel the difference, particularly if you’re the sort who’s sensitive to dry conditions. The 1-gallon (about 4 liters) tank lasts for about 36 hours of humidification, and since you’re dealing with varying degrees of hardness of water, comes with a deep clean function as well. The display and the app indicate when you need to do a deep-clean to descale the built-up deposits, and while I haven’t had the alert come up in the month of use, it’s really a matter of throwing in a spoonful of citric acid with some water and hitting a button. 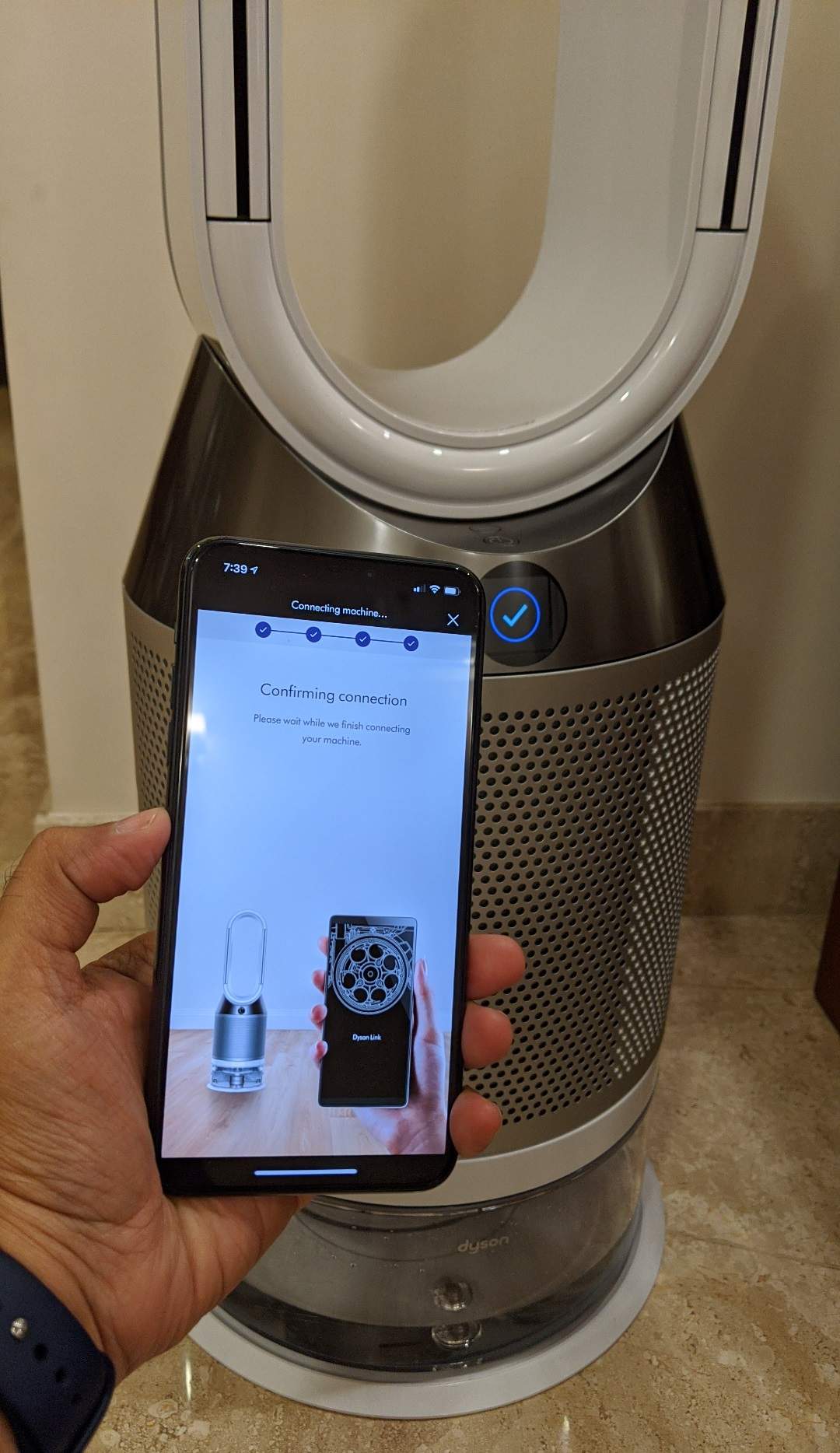 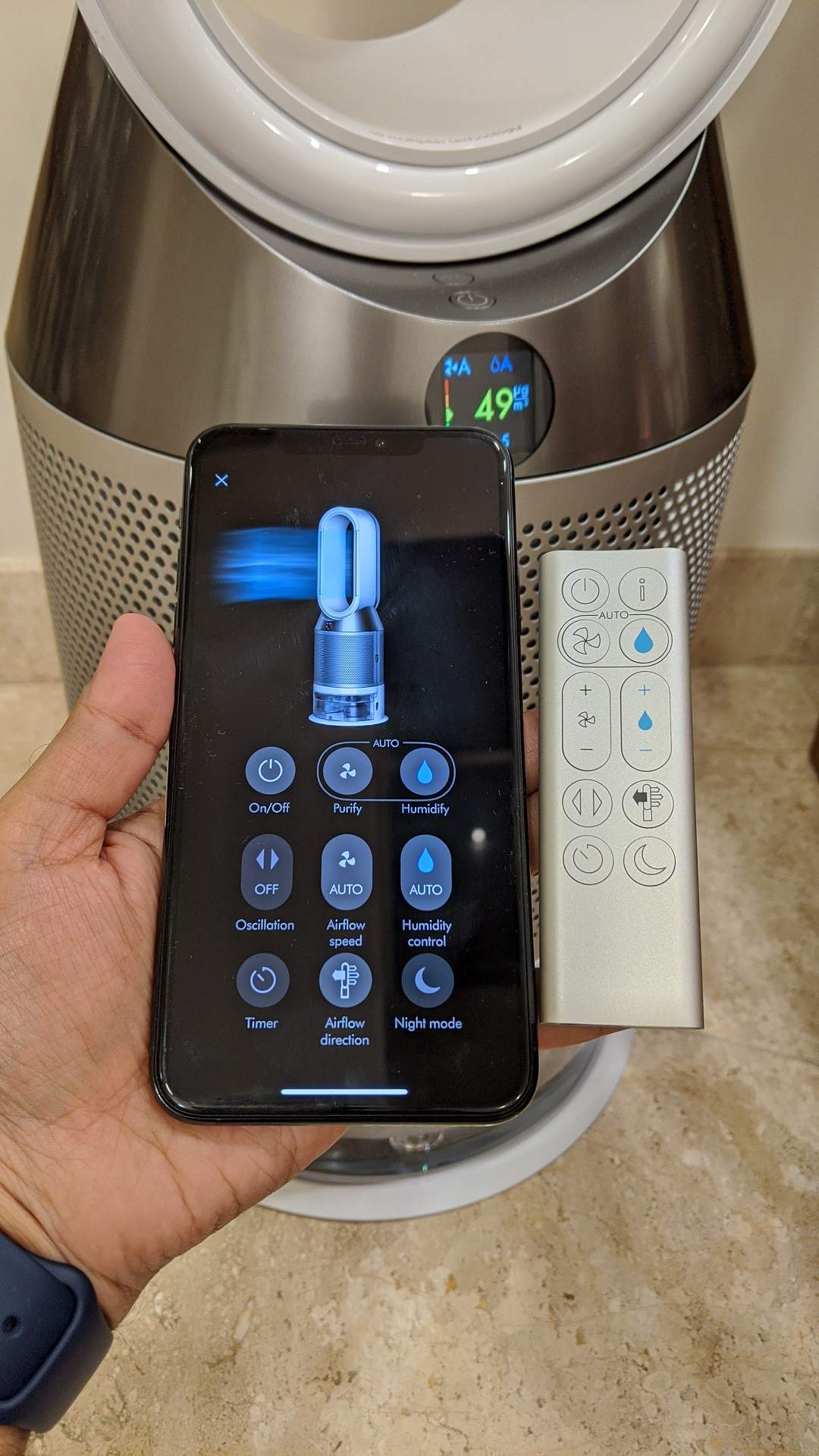 The Dyson Pure Humidify + Cool takes a bunch of functions you’d typically associate with multiple machines and combines them into a thoughtful and cleverly engineered product. When people referred to Dyson as the Apple of the consumer appliance world, it’s not far off the mark – it’s designed to be friendly to use, is best in class and in some ways, rightfully commands the premium. In this case, when you start adding up the costs of a connected air purifier, a standing fan and a humidifier and then account for the saved floor space and the gorgeous looks, the Dyson doesn’t feel that excessively priced. If you’re not too hot on the humidification function, the Dyson Pure Hot + Cool (Rs. 55,900) might be worth considering for the winters as well.

Cons: Pricey, heavy to lug around, often loud, doesn’t rotate as much as siblings