The year was 1982. During the month of June, Bengaluru’s creme de la creme, were given the taste of something unique by ITC Windsor, then called Windsor Manor. A cuisine by the Pashtuns of the North Western Frontier province was recreated at the newly opened The Royal Afghan. The dinner-only restaurant went onto create history for the hotel with a menu that remains unchanged even after 35 years. Some of their signature dishes such as the Dal Bukhara and Barrah Kebab have loyalists who dine there only for these dishes.
Today, 35 years later, their 30-dish menu displayed on a huge wooden board hangs at the restaurant’s entrance, by the poolside. It is certainly the pride of the hotel. While some of the old Bengalureans, the hotel’s loyal patrons, would know why the menu has stood the test of time, we chose to try it firsthand to understand it better. As a special promotion to celebrate the anniversary, Chef Riyaz Ahmed and his team have crafted a special chef’s choice menu that includes the most popular signature dishes.

Fresh from the tandoor
The first rule at The Royal Afghan for a diner is to experience the food with their hands. As a mandate, the servers, dressed in Pathani suits, don’t place cutlery — even the basic fork and knife on your table. They say Pashtuni Kebabs and naans are best relished when eaten with your hands. But for diners who are uncomfortable with this idea, they oblige. Second rule, there are no rice dishes on the menu, as the North Western Frontier cuisine’s specialities are a variety of kebabs, which complement tandoori naans.
We began our meal with the Tandoori Jhinga. Juicy and luscious, the prawns, (cultivated by ITC in Nellore), were cooked to perfection in the tandoor. Next, succulent pieces of Murgh Malai Kebab were served. A combination of chicken thigh and breast, marinated in cream, and coriander seeds, these kebabs are delicious. It was the flavour of coriander that stood out. 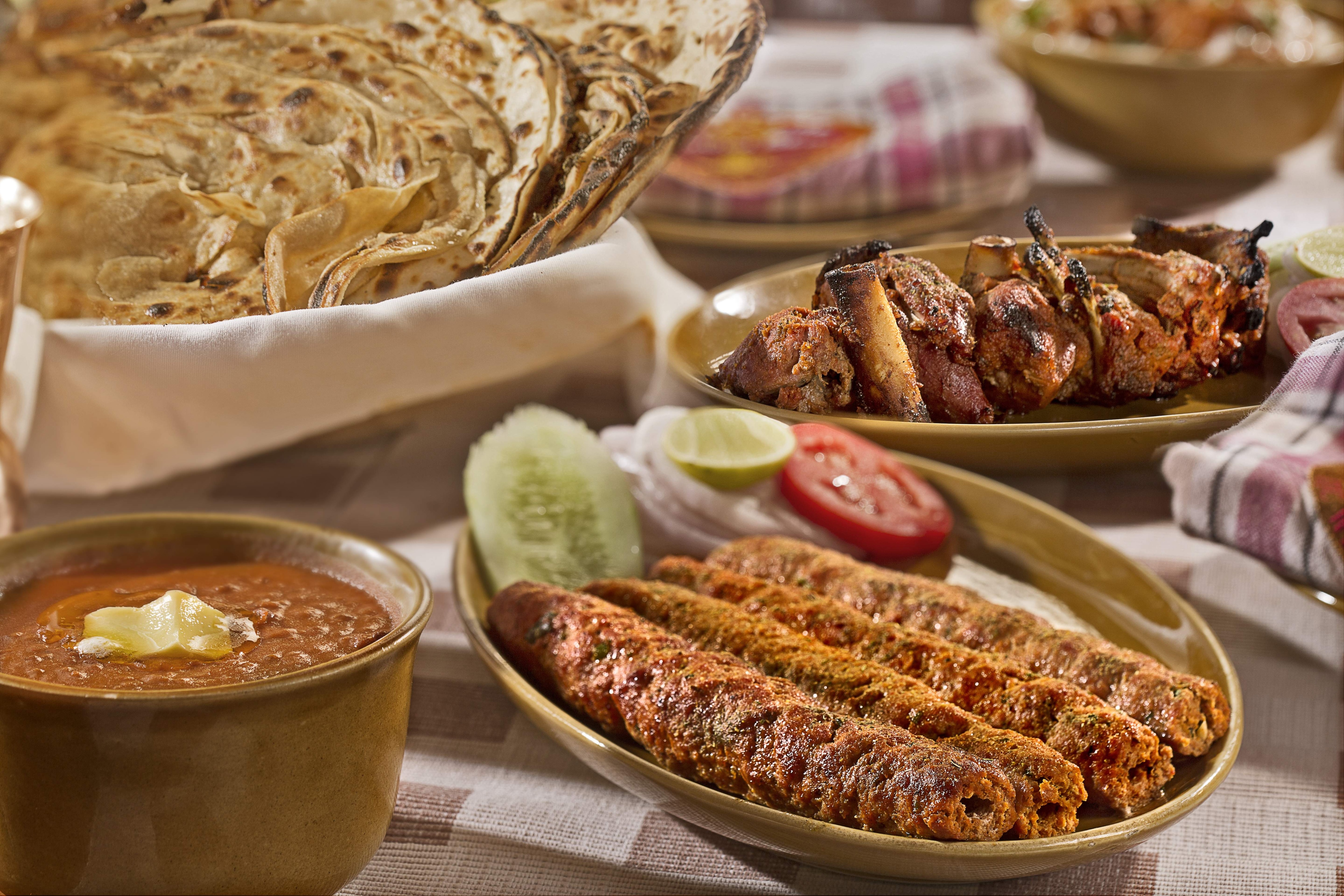 Smoke alert
The next two kebabs are a dream come true for mutton lovers. The Barrah Kebab and Sikandari Raan are must-haves. A combination of meat from four different parts of a lamb, the Barrah Kebab packs a punch of flavours. Marinated for six hours in garam masala, red chillies, vinegar and yoghurt, the kebab gives the palate a burst of spicy, tangy and smoky flavours. The Sikandari Raan, made with a combination of forearm and shoulder meat, redefines the taste of a mutton kebab. Utterly soft and velvety, this kebab was the hero of the meal.
Though non-vegetarians have a lot to choose from, even the vegetarians are offered an interesting assortment of kebabs. The Tandoori Aloo and Tandoori Phool were the most impressive. Stuffed with finely chopped ginger, garlic, green chillies, cashews and cheese, the Tandoori Aloo gives the humble potato, a royal touch. The combined flavours of the stuffing makes this delicate starter worth a repeat. The Tandoori Phool is cauliflower marinated in ginger and garlic, deep fried and then cooked in the tandoor to enhance the flavours. We liked the smokey flavours and the coarse texture of the cauliflower.

Breaking bread
For main course, we were served the signature dish — Dal Bukhara. Cooked overnight, this black lentil curry is served with a topping of rich butter. The reason behind cooking for such long hours is to ensure the lentils split, to get the right texture. For non-vegetarians we recommend Murgh Makhani. Soft chicken chunks cooked in thick gravy with butter make this a dish meant for the royals. In both the gravies, we noted how butter makes all the difference. From the naans, the Ajwaini Khasta Roti was our pick. Brought straight from the tandoor, this warm naan with a texture like biscuit, pairs well with both gravies.
With such rich starters and main course, we preferred to give the desserts a miss, but not trying the Gulab Jamoon and the Firni at The Royal Afghan is a crime. The Firni, set in clay bowls, had the authentic flavours of rose water and saffron, while the hot Gulab Jamoon just melts in the mouth. For those who prefer a lighter dessert, the Kulfi with falooda is an option to try.
At the end of the lavish dinner, we were left truly satiated. The Royal Afghan’s menu is for those food connoisseurs who like to go back to flavours that have been handed down from generations, and every dish we tried here is testament to that.