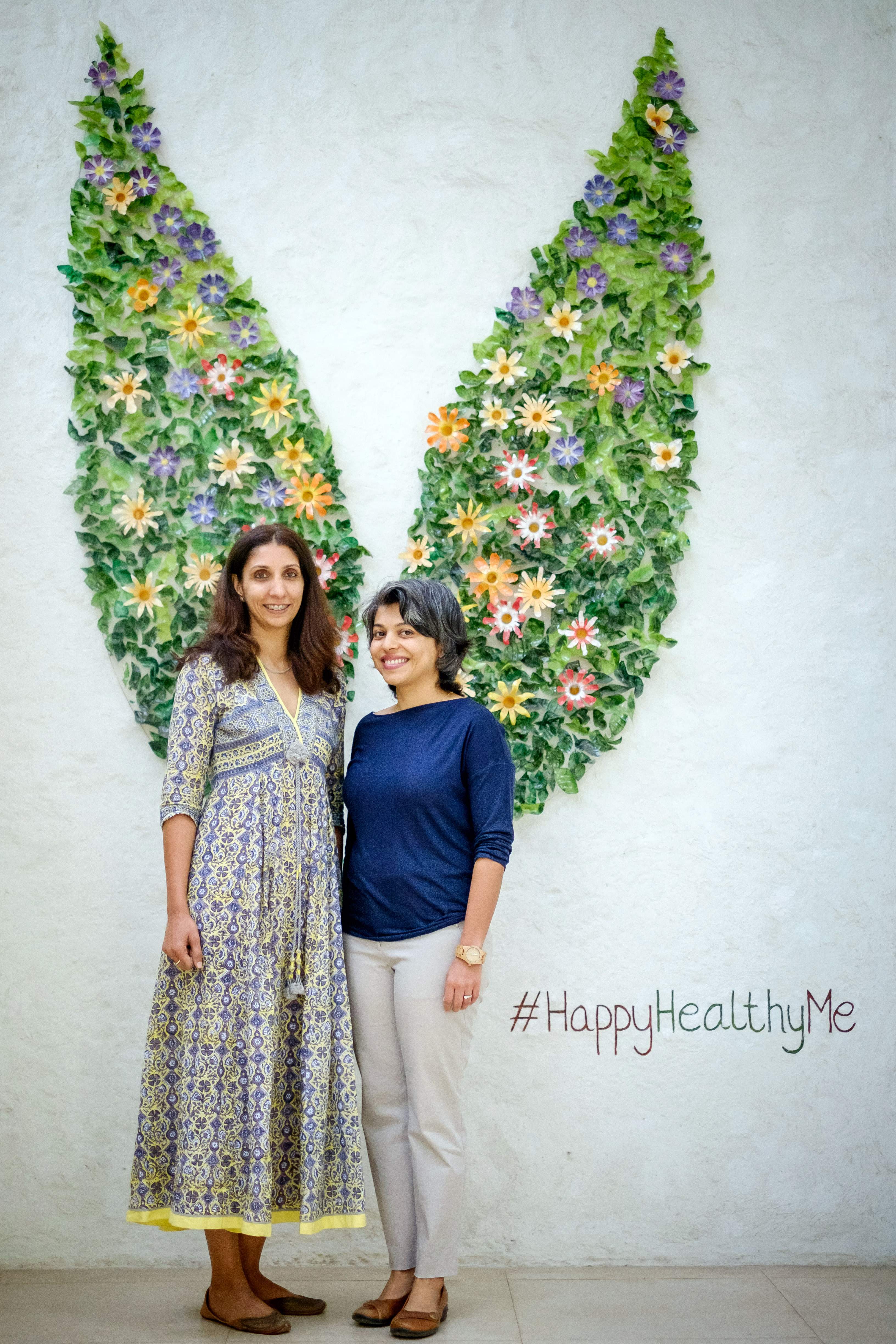 Happy Healthy Me
Two mothers in their mid-30s got together to lose the extra pounds they had put on, just to be able to keep pace with their growing children. But in the quest to eat healthy and stay fit, the two ladies chanced upon an idea to set up a sustainable, organic food business. That’s when Happy Healthy Me was born. A brainchild of city-based entrepreneurs Namu Kini and Misha Gill, the organic store-cum-cafe in Indira Nagar, has been a success story so far.“During the course of our weight-loss journey, we realised what a huge role organic food plays in our diet. By sticking to organic food, we were getting stronger and fitter,” says Misha.
While looking for organic produce, they realised how difficult it was to source it. “There are people who have been working in this sector for over two decades now. It’s just that, we in India are waking up to this now,” she says. With enough research and information, the team started out in 2016 by sourcing 300 products from around Karnataka and indigenous produce from other states. “We stuck to local procurement as much as possible. Our sustainability model is based on using produce that’s native to our region. For example, we don’t stock olive oil because olives don’t grow here. We use local oils and even make our salad dressings from them,” explains Misha. Even their packaging and delivery bags are biodegradable. In fact, the angel wings outside their store in Indira Nagar, where many customers and visitors pose for a picture, are made from recycled plastic. Going forward, the duo is looking at taking the Happy Healthy Me store and their message of sustainability to other Indian cities. Details: happyhealthyme.com 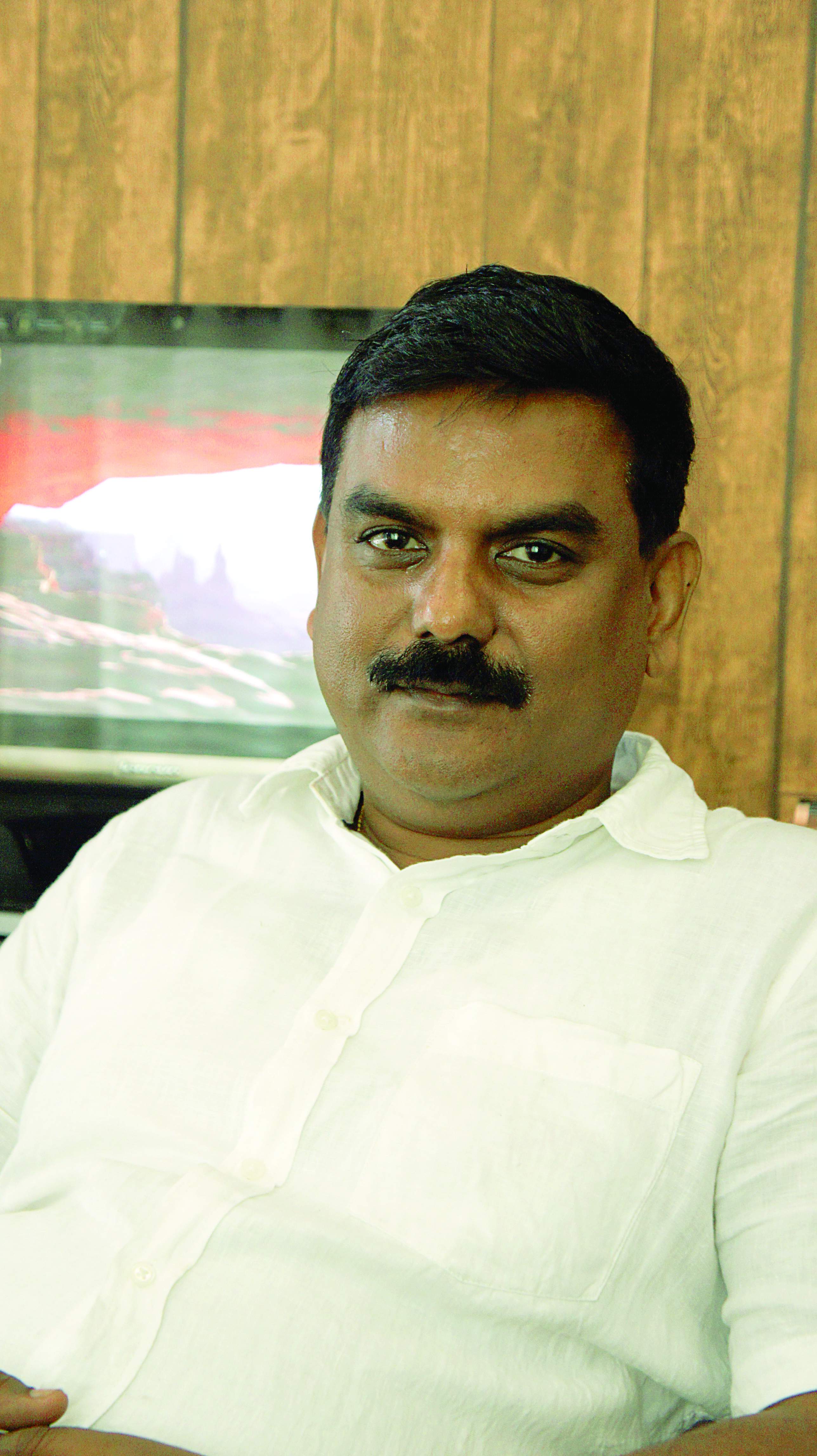 Titos Organic
While organic grocery brands are not a novelty nowadays, Tito’s Organic stands apart for their brand philosophy.  The brand, which stocks all dry groceries such as rice, dal and other grains, as well as cooking oils, works with farmers in the drought-ridden areas of Maharashtra. “These are the areas which have the highest numbers of farmer suicides,” says Selvam Daniel, the owner, adding, “That is why we follow a pro-poor, agro value chain model.” This means that they directly interact with the framers in the region and only sell products that they grow. So, for example, while many other organic brands have Basmati rice, Tito’s does not, since the farmers in the region do not grow it.
Up till last month, Tito’s was only retailing in the state of Maharashtra. “While working in the border areas, we noticed that a lot of our products were very popular with the local population of Utara Karnataka, such as the Kolam rice and the millets. Hence, we decided to start retailing in Bengaluru also,” Selvam explains. Tito’s is now available at Spice Route in Mantri Mall. Details: titosorganic.com Daily Dump
Every home produces a dustbin ready to be thrown out every day which has 60 per cent of rich organic material which can be converted to fertiliser and topsoil. Yet, most of us know nothing of this material, how to deal with it, what it transforms into and so on. Daily Dump was created to spread awareness about the benefits of composting and to equip people with the tools to use kitchen waste to their advantage. Based out of Indira Nagar, they sell terracotta pots for composting. “Daily Dump seeks to get everyone to engage with their dustbins in new ways and feel proud of their changed perceptions and behaviours around consumption and disposal,” says founder Poonam Bir Kasturi. Daily Dump also conducts activities to create awareness. They just wrapped up a three-month engagement  programme with children on exploring the idea of nature and worked on some environment-related workshops with teachers and students. Poonam feels Bengaluru has a lot of committed and inspired people working to make positive change happen in terms of waste management, but the current implementation methods of urban planning and built spaces are not helping. “I am an optimist, I have to be, to get up every morning and do what needs to be done, but in my heart, I know that what is happening is not good,” she signs off. Details: dailydump.org 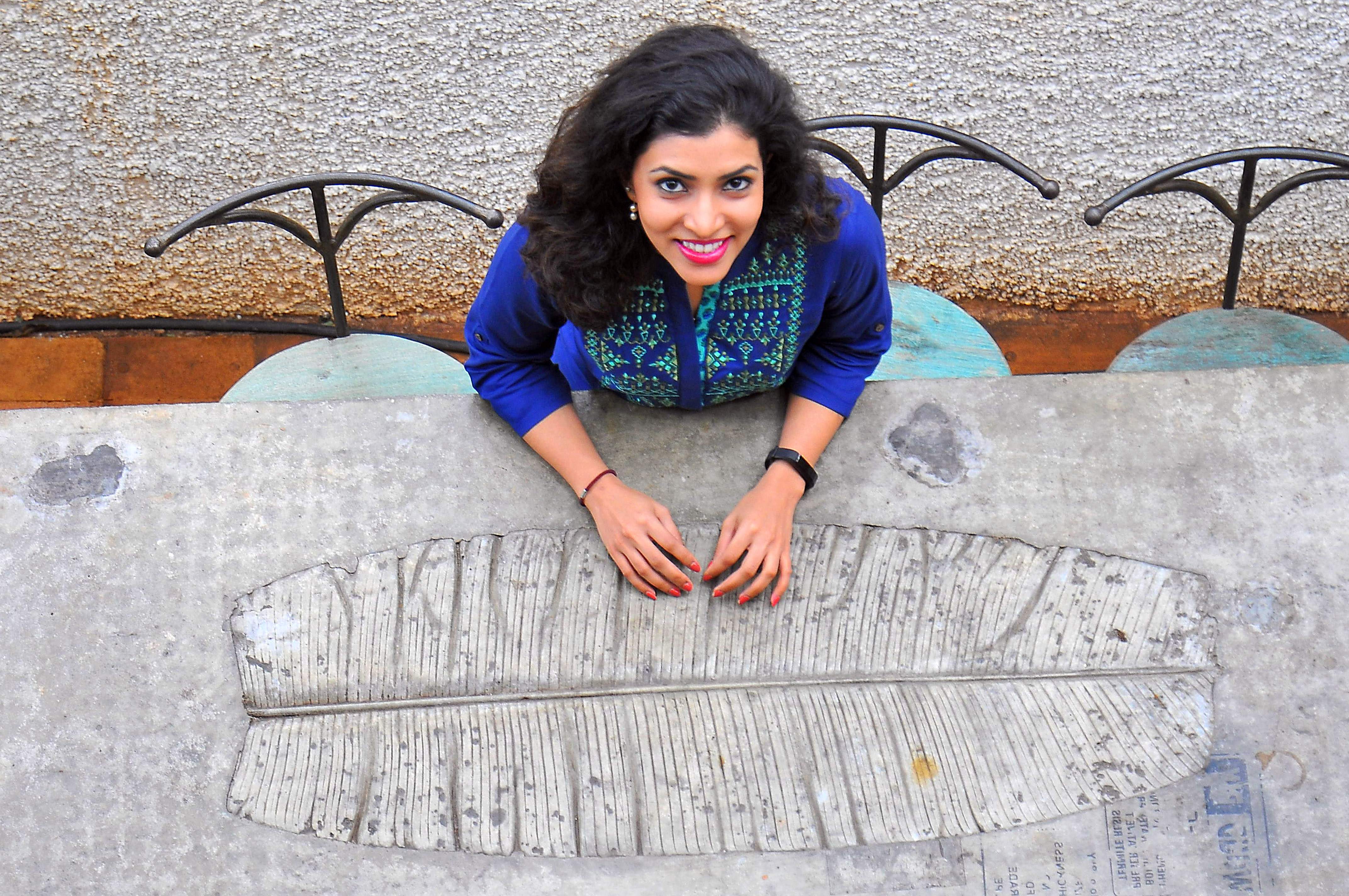 Go Native
It all started when Anvitha Prashanth visited Berlin during the summer of 2014. “I went to Berlin on a holiday. It’s a sort of hipster city, where everyone is so conscious and are trying to live a sustainable life. That’s where I got hooked onto the idea of eco-consciousness,” recollects Anvitha. Three years later, Anvitha has taken forward her learning in Berlin, by opening Go Native, in partnership with city-based Jenny Pinto and Radish Shetty from Purple Turtles — a home decor and lighting store. The idea behind Go Native, a cafe and lifestyle store, is to start conversations about conservation and to reduce our carbon footprint. “We live in a connected world. The way we live, what we eat, what we wear and how we have fun impacts our health, our environment and the community we live in. Whichever way we choose to live our lives, we have to respect people and the planet. At Go Native, we want to share with you the pleasures of sustainable living,” says Anvitha.
The entire building runs on solar power and the retail store stocks an assortment of traditional kitchen utensils, Manipuri woven baskets, upcycled frames and mirros from Rajasthan and other knick-knacks made through indigenous methods. The cafe also has a space for workshops. “We recently conducted two composting workshops and realised that this could be a regular feature because many people are interested in it,” she reveals. Details: go-native.in 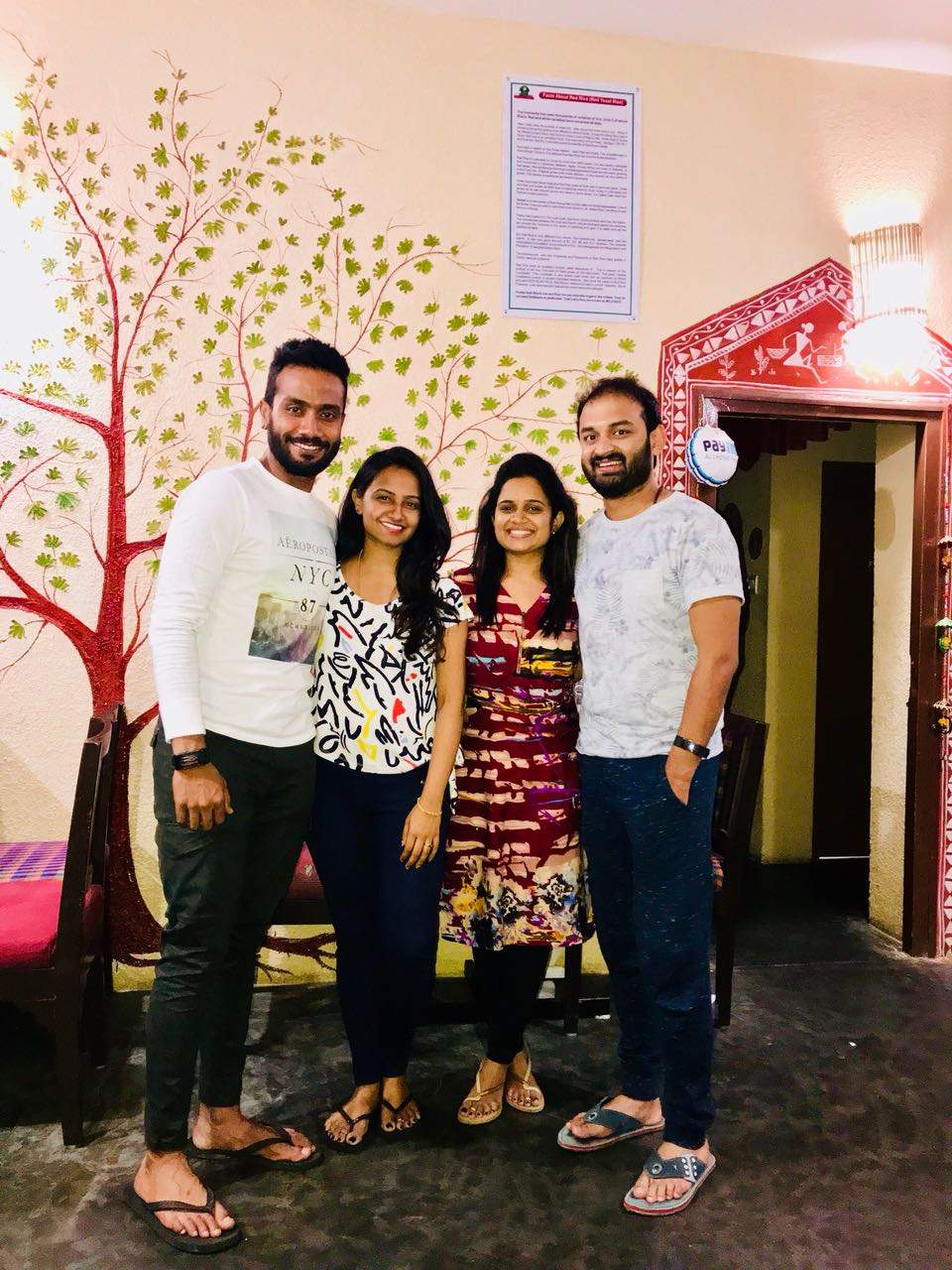 Prems Grama Bhojanam
One of the rising stars from Karnataka’s cricketing fraternity, KC Avinash, has taken on a new role. Avinash, along with his wife and two friends has turned restaurateur with millets-only restaurant, Prems Grama Bhojanam. “A few months ago, I had been to Chennai while on tour. That’s when one of my friends took me to the original Prems Graama Bhojanamin in the city. I was blown away by the variety of dishes that were cooked using millets. So I thought it would be nice to open an outlet in Bengaluru,” says Avinash, a batsman who played for Malnad Gladiators at the recently concluded Karnataka Premier League.
Once he decided to go ahead with his idea, there was no stopping him. The resturant is jointly owned by his wife Teena, a former media professional, his restaurateur friend Yuvajit Venkatnarayan and Yuvajit’s wife Smitha. Prems Graama Bhojanam’s Bengaluru outlet was launched in Jayanagar three months ago. “Everything is cooked only with millets that are endemic to Karnataka. We don’t use sugar or preservatives. All our ingredients are sourced locally,” explains Teena. The water they serve is purified by the RO plant on the terrace, and is infused with tulsi, camphor, cardamom and clove. You will not see them serving bottled water as that goes against their principles of being eco-conscious. “We are trying our best to create awareness about local foods and produce. Using only millets is our way of going back to our roots,” signs off Teena. Details: 7975101029