The Joker's Kitchen is here and we seriously love it

If you're a fan of the late Heath Ledger, Joker’s Kitchen might be your new sanctuary. If clowns scare you, however — then the 22 jokers that seem to surround you (wall murals, artwork, even bathroom décor) might have you spooked even before you get to the menu! The 960 sq foot cafe run by 25-year-old Shakti Hariharan opened for business just a week ago on the bustling TTK Road. Taking a tour of the space we spot pop culture villainy from a range of films over the years — the most popular being Dark Knight Rises and Suicide Squad. Ironically, Shakti who is fresh off of the high of having recently watched Kaala — is no batman fan. “I just wanted to pique people’s curiosity with the name and the design,” she says. Well, mission accomplished. 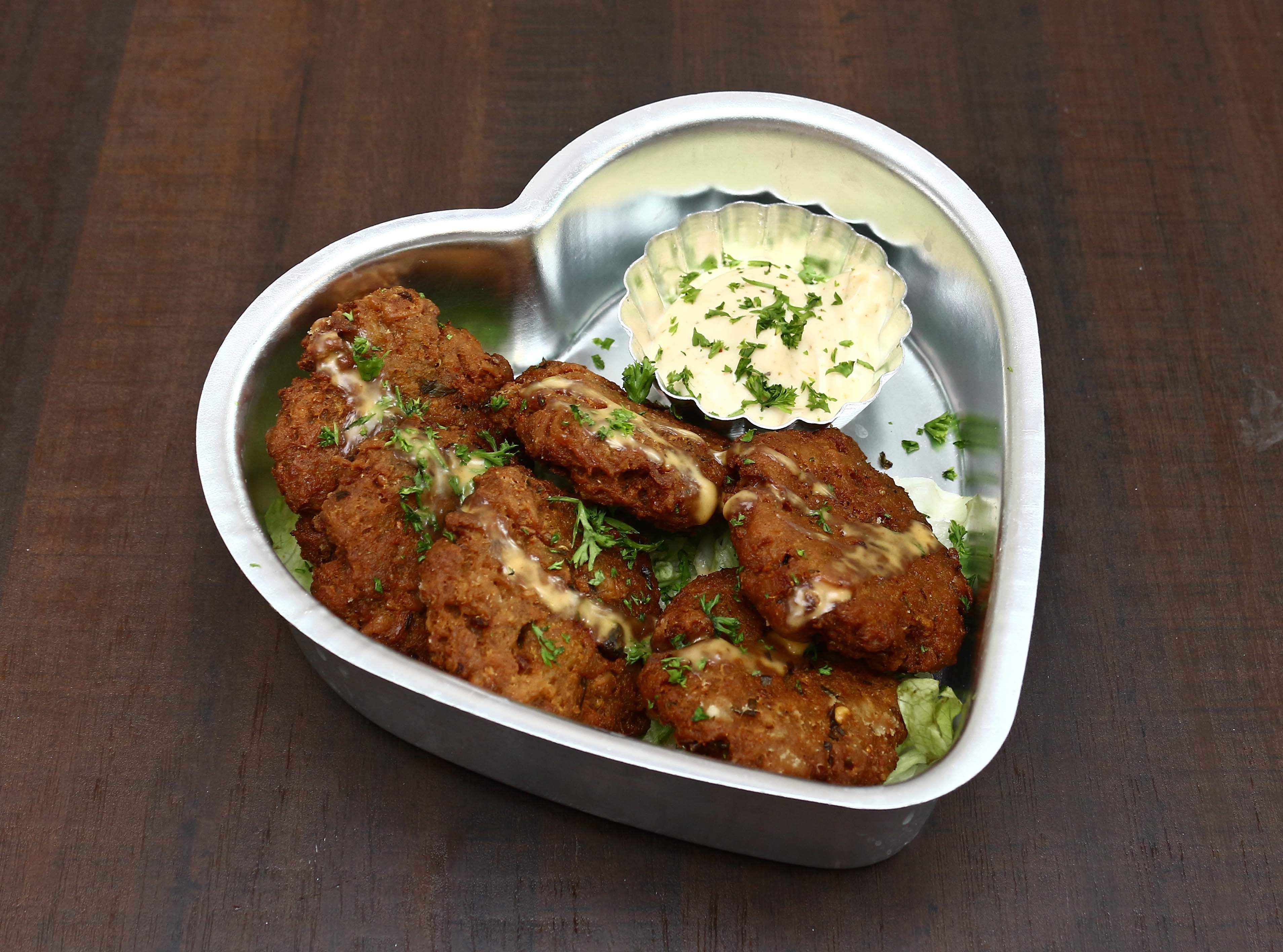 Maggi in a vadai?
Settling into the 40-seater space, flipping through the menu — it’s a bit difficult to tear your gaze away from the eight-foot-tall joker (this one resembles Jared Leto from Suicide Squad) staring at you from across the room. “That one took two entire days to paint,” says Shakti, as her business partner, chef Mohammed Nasir (26) brings in our first dish. This one is a surprise — its a ‘Maggi Vadai’ and looking up at the fake blood-splattered ‘Why so serious?’on the wall — we’re kind of glad it doesn’t come accompanied with ketchup! Over a munch and dip of cheese sauce, we find out that Shakti, formerly with the front office of the Taj Coromandel back in 2013, always wanted to go the entrepreneurial route. By chance, she bumped into chef Nasir (then working at Pasta Avenue) — and the two decided to team up and start a café.
The Maggi Vadai — deep-fried instant noodle fritters topped with cheese and spices, is just a taster of their healthy-meets-desi fusion list of choices on offer. Their Namma Cheese Pizza for instance, is a good option for somebody who grimaces at the thought of green veggies. With a sprinkling of shredded cabbage on top — it adds crunch and pairs surprisingly well with the corn and cheese. Another dish that got our taste buds approving was their Healthy Baby Pasta. Made with cheese and spinach (that looks very much like baby food) it was succulent and creamy. Even the Cheese Tava Pulav swaps out paneer for soya chunks, but this touch is perhaps a bit too healthy for our liking. Bang on!
Moving on to more calorie-heavy picks — is their Bang-on Bread, oozing with alternate layers of Cheddar and Mozzarella. Served with a pocket of their signature marinara sauce — carved out within the loaf itself — we give the sauce, especially, a big thumbs up. A much-looked forward to Chocolicious Pasta that arrives next is a bit of disappointment — too sweet, not chocolatey enough we say. 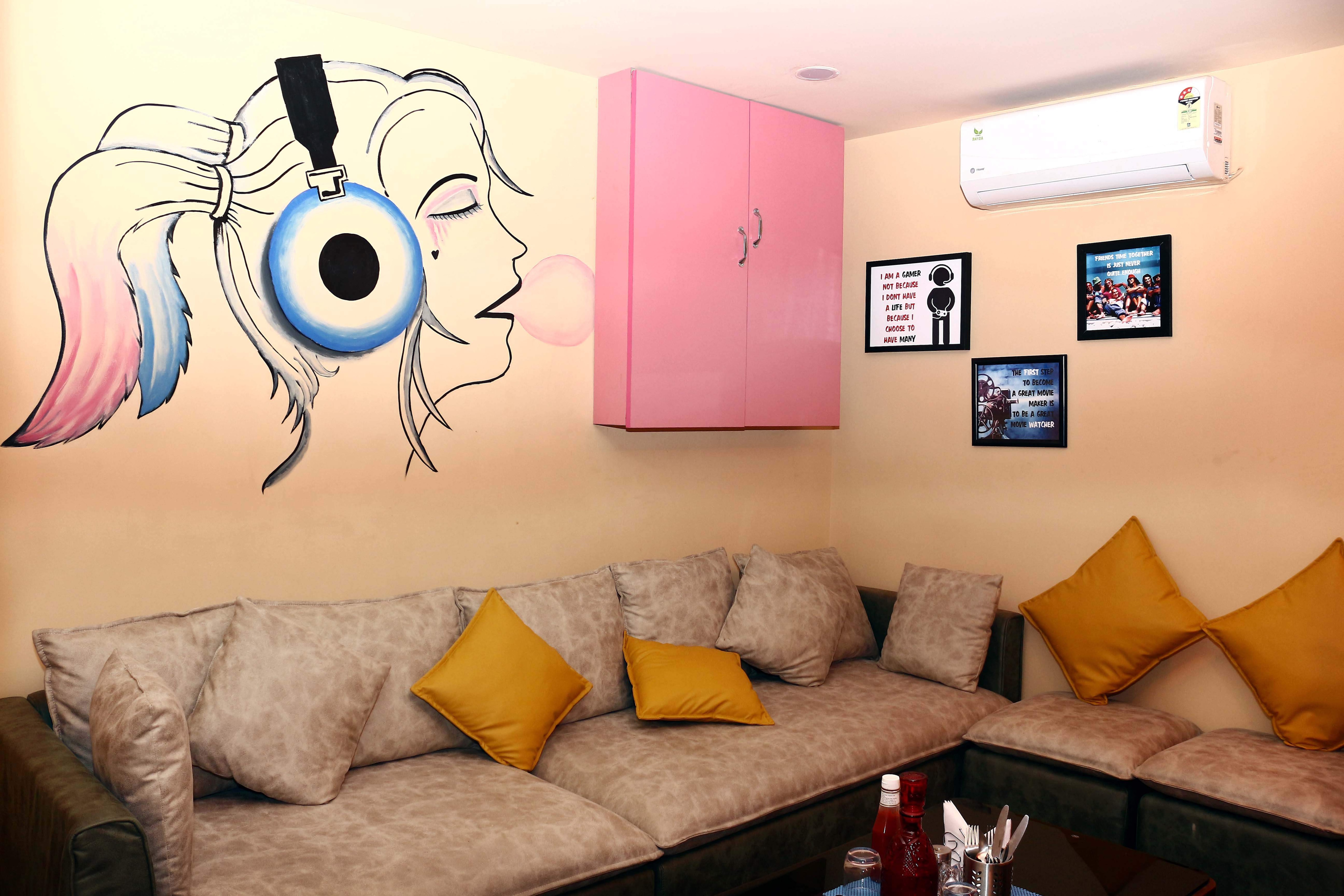 Fortunately, their 750 ml monster shakes that come in flavours like Choco Brownie, Gul Bahar (our favourite), Very Berry and Pop Corn more than make up for it. Our final stop on the tour of this café is the private lounge area — (`300 an hour) which comes with an eerie red light or a bright, cheery one depending on your mood. “We’ve got board games and Netflix, whatever you might like to do with your friends,” adds Shakti.