Watching the assemblage of Ilsung’s unique creations can make you feel like a character in Dan Brown’s The Da Vinci Code. With a vocabulary that is incidentally similar to this controversial novel—where the fate of the plot rests on an elusive keystone—Ilsung’s puzzles too, hold their secrets within one crucial piece.“Edakoodam aka wooden puzzles were a way of testing intelligence back in the days when intellectual debates were organised by royal/affluent families. Kerala boasts of over five unique designs of its own when it comes to this particular segment,” begins the craftsman, whose devices are fashioned out of the leftover wood from his studio 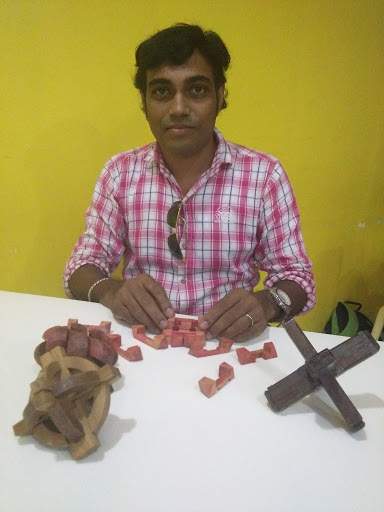 Puzzling histories
Having invested over six years into the research of these structures, this Maala native claims that these burr puzzles’ (interlocking puzzle consisting of notched sticks) lineage back to the East Asian countries, contrary to the popular records which point to the Western hemisphere. What began as a fascination towards one of the puzzles—that has been in his family’s possession for generations—led Ilsung towards traditions such as Tangram, an 18th century game from China. A result of finely balanced-equations from both mathematics and masonry, each of this 38-year-old’s toys take up to three days to complete.

Finding faces
Counting up to 30 variants at the moment, the category of edakoodam features designs consisting of three to 24 interlocking pieces. Apart from popular building structures such as the pagoda (Japanese crystal), star-faced structures and right-angled notches form an integral part of Ilsung’s collection. Handmade with teak and rosewood, his devices aims at reducing the plastic toys that dominate the market these days.“They seem innocent enough, but plastic toys contribute to 80 per cent of pollution in the oceans alone,” he tells us, adding that he hopes to popularise these sustainable structures through platforms like the Kochi Biennale.