Chennai's racer chick Alisha Abdullah is back to racing, both on cars and bikes

Alisha Abdullah is the first name that springs to mind when it comes to stars of motorsports and racing, emerging from Chennai. From winning her first Championship at the age of 13 to being the country’s first female national racing champion to now taking part in a bike and car racing championship, the 28-
year-old has burnt the asphalt innumerable times. She started her own racing academy called Alisha Abdullah Academy, for women only, last year and while she has faced a few bumps along the way, she hopes to restart it again this year. While she has been racing cars for a long time, after a hiatus of eight years, she recently got back to her first love — bike racing.

“My idea is to basically give bikes to people who cannot afford to race,” says Alisha. “Everything is funded by us and we are always on the lookout for passionate and talented racers to help them give an opportunity.” While Alisha usually only participates in either a car or bike championship at a time, this month she is participating in both simultaneously. While the MRF National Bike Racing Championship ended just a week ago, the Indian National Racing Championship 2018 (car)  is yet to commence. “There’s a huge difference in terms of experience and control,” says Alisha. “The bike is about 160cc, but the car that I am racing with is really powerful. I am racing an Indian Touring Car, which is one of the highest racing cars in India, in the saloon category. In bikes, you can go really low. But in cars, you have to be precise because the racing lines and the downshifting of cars and bikes are as different as chalk and cheese.” In 2014, Alisha Abdullah catapulted to fame after she became the first Indian woman to get a podium finish at the Toyota Vios Cup in Thailand. With international racing still being an expensive affair, the racer decided to focus on the national level. 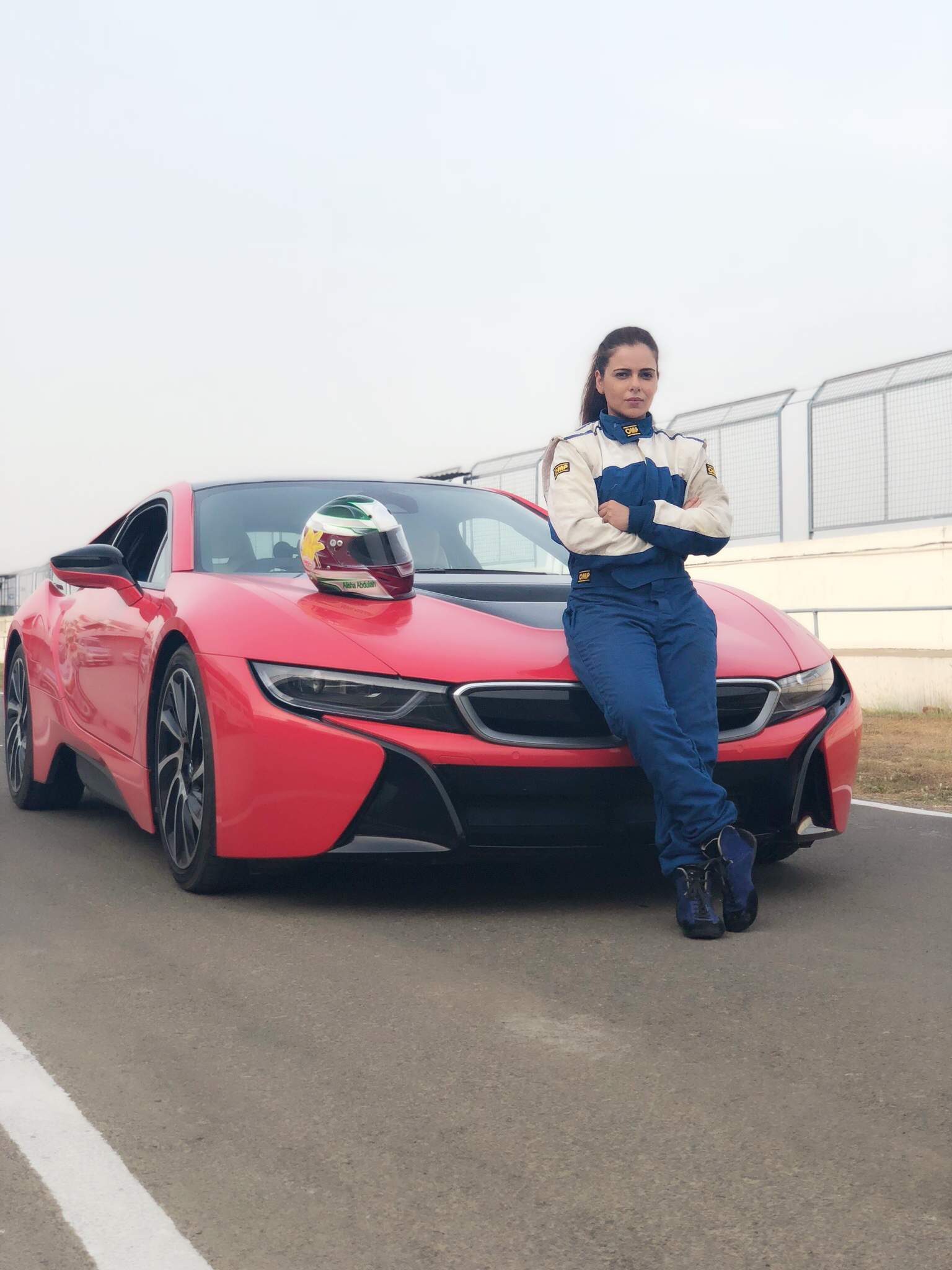 Alisha realises that this is going to be challenging and will demand a lot from her — physically and mentally. As far as fitness is concerned, this highly competitive racer’s daily routine revolves around the gym. “I used to go to the gym for heavy training before, and had muscles that resembled a bodybuilder,” she says with a laugh. “Then I realised it’s not about muscles, it’s about body weight and training.” Alisha soon joined F45 gym to work on her spine and neck, which play a pivotal role in balance and weight control, especially when manoeuvring bikes and cars for longer periods. “Everything from my metabolism to my immune system changed. Now, it’s just one or two hours at the gym, with specific training and clear goals.” Alisha has never believed in going on a strict diet as such, however, she feels that a proper workout will teach your body what to eat and eventually will adjust to your regimen. “My immune system has changed so much that I can only consume a particular kind of food.”

Considering how different the driving experiences are on a car and bike, we ask her about the gear. “It’s so different between the two. It’s like wearing a large clunky robe in a car and wearing almost nothing while you’re on a bike. I am used to it. But I make sure I am happy with my fitness, so I can handle large and heavy gear like that.”

Speed is Alisha’s friend, but interestingly enough, she does not ride on city roads. “I do get scared when I ride on the roads, like recently, for a shoot, I was made to ride on the OMR stretch, and vehicles were whizzing past me. Yeah, it was quite scary.”

We ask her about the academy that she had opened a year ago and how it has been faring. “Very few girls in India are interested and passionate about the sport. The other girls feel that if they don’t win one race, they must give up. They don’t realise that each time you fail, you have to get up.” This negativity then permeates down to other girls and soon enough, everyone is quitting.

It also got hectic for Alisha to juggle between her career and the academy, without anybody backing her up. However, she is determined to restart this. This year, she is coming up with a car racing league (like an IPL) of sorts, with colleges competing against colleges. “I am training college students for formula car racing and the response has been tremendous,” says Alisha. “Once that kickstarts, I will bring back bikes into league.”

Round 2 of the Indian National Racing Championship 2018 will be held in Coimbatore, from June 22 to June 24.