Palatial pursuits - the suite life of royals at Mahmudabad Estate

When you head to the land of Nawabs, you don’t usually expect to meet one. But I did. Believe it or not, this grand old gent who hails from an era in my history textbook speaks in a pronounced British accent. Cambridge education we are told. Seated beside real life royalty Mohammad Amir Mohammad Khan of Mahmudabad— most were content to listen to his tales of days gone past and political currents traversed. But always the romantic, I pipe up, “You mentioned you met your wife at Cambridge. How did courtship work back in the day?” He pauses mid-way through a spoonful of Shahi Tukda, looks up in surprise and smiles. “Urdu poetry,” he responds with a twinkle in his eye. 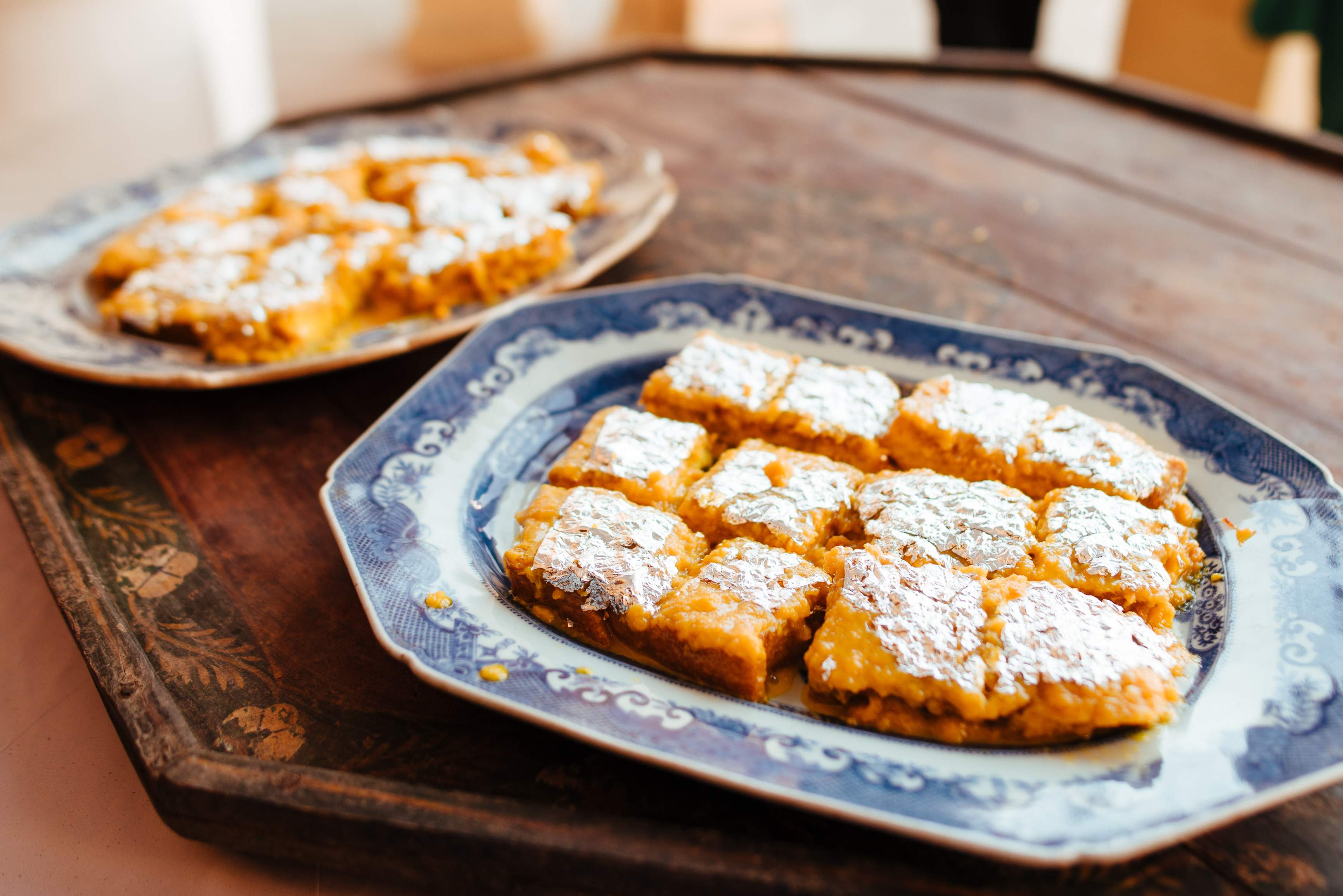 As a newcomer to Lucknow, first impressions couldn’t get any better. The Renaissance Lucknow Hotel, a premium brand by Marriott International, rolled out the red carpet quite literally by organising this heritage jaunt as a part of their Global Day of Discovery programme. The concept is a contemporary twist on tourism — where guests turn discoverers and concierge staff turn navigators. As a thoughtful gesture, to mark the distance I had travelled from Chennai to Lucknow for the trip, there were edible milestones in the form of mustard coloured pedas with kilometre markings on them, placed on a map and greeting me, as I entered my room. Little did I know at the time, but this set the tone for the next two days. A journey rife with culinary adventures — from aloo ki tikki on the streets of Hazratganj to slow-cooked Tale Alu ka Salan (mutton and potatoes) at the royal dining table of Mahmudabad. But first — coffee. In this case, we skip the latte and opt instead for a jolt of caffeine embedded in a chocolate ball at the hotel’s lobby cafe. Okay, now we’re ready. 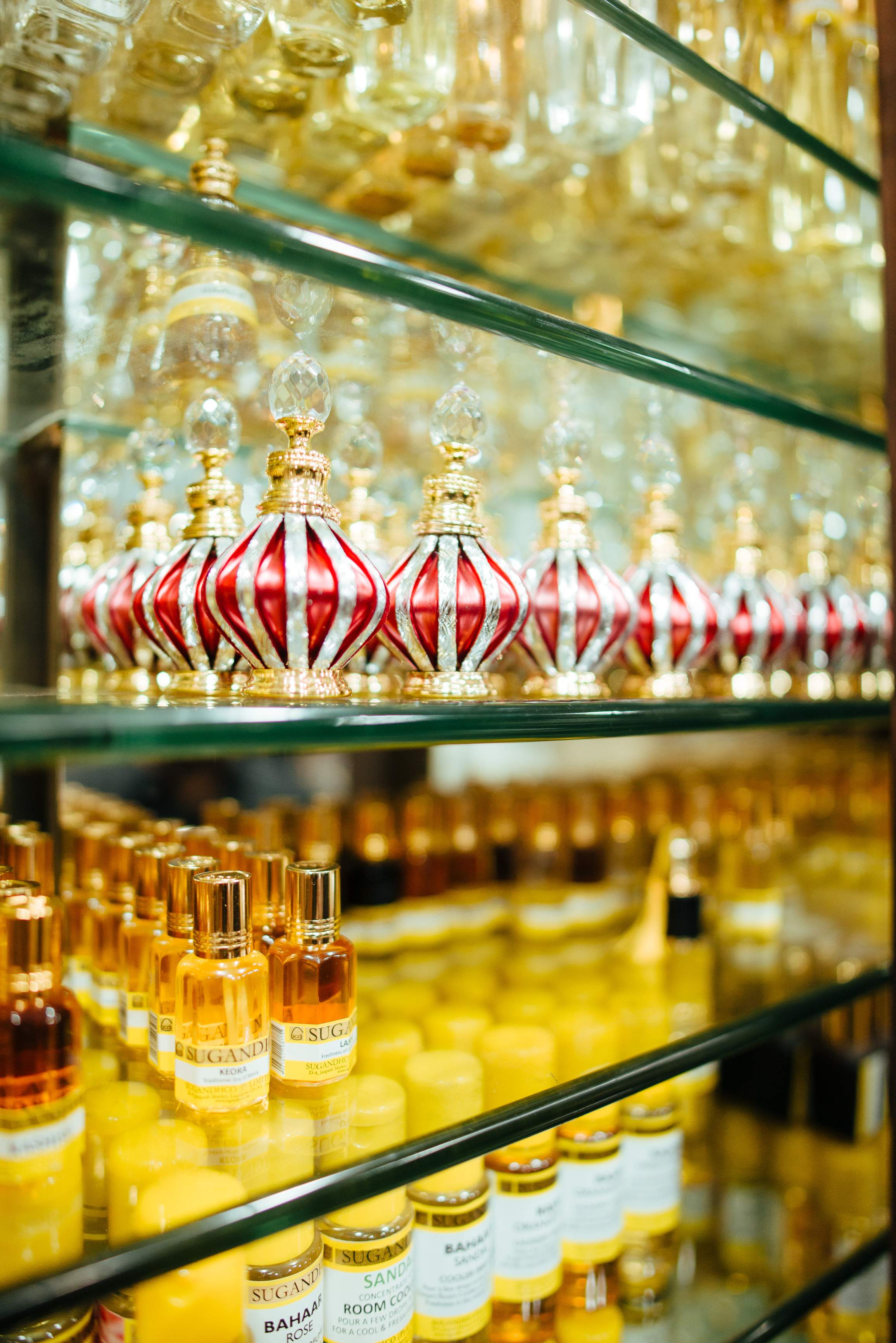 Fuelled for food probably sounds a little ironic. But this holds us in good stead for a walk through one of the city’s busiest market areas, the aforementioned Hazratganj. The streets are so electric with activity that one male member of our group is privy to the unfortunate experience of grazing past a live wire. The rest of us, who made it safely across the street to the nearest golgappa (pani puri) destination heard of this much later. We gorged on street eats that came packaged in unfamiliar combinations. Aloo ki tikki with a dollop of yoghurt on top. Imarti (jhangri) piping hot from a deep dish of oil came served with cool rabadi on top. And a strikingly orange falooda arrived on a plate (instead of the glass we are used to) with broken pieces of kulfi.

Along the way, we stop at one of the oldest bookstores in town, do some chikankari shopping and even squeeze in a marathon session of ‘ittar’ inhalation, courtesy the patience of the sixth generation youngster in the family business. The names on the bottle are no help at all. Decipher these if you will — Gajra, Filhaal and Tilism. We smell jasmine, watermelon, eucalyptus, pepper and then some. All of which were reluctantly exhaled at the early morning deep-breathing yoga session the next day.

There is much to be said historically about one of the oldest estates of Awadh (Uttar Pradesh). If you’re wondering, the name Mahmudabad comes from Nawab Mahmud Khan, who was in fact titled by none other than Akbar the Great. But what we are curious about is its 400-year-old culinary practices. So even though a tour of this property boasts high ceilings, lavish tapestry and chandeliers that make us swoon — our giddiest moment arrives as we set sight on the royal dining table. It seems to stretch on for about a mile... The platters of Kathal Pulao are so large and heavy that you are at an advantage if you sit near them, as they simply cannot be lifted off the table. Kathal incidentally translates to jackfruit, and the pieces were so succulent that several guests mistook them for meat at the outset. There are signature Lucknowi Galaouti kebabs of course and Gosht Pulao, paired with Burani (smoked aubergine in yoghurt with pan-roasted cumin and pomegranate). At Mahmudabad, even the raitha has a personality of its own.

Perhaps the only thing more fascinating than devouring dishes prepared by khansamas (top chefs) at the palace is hearing stories about this cuisine of yore. “I think my favourite food memory is of the Naan-e-naimat, our version of the mille feuille — with various layers, nuts, raisins and syrup. It’s usually made for weddings and I think the first and last time I tasted it was 13 years ago,” recalls Prince Ali Khan. To ensure century-old recipes like this one don’t fall by the wayside, a slew of revival efforts are underway. This includes public visits and the option to dine-in at the Qila, which only began a year ago. This summer, Ali is making it his mission to bring back the  Naan-e-naimat and make it a more accessible dessert. He offers us a plateful of perspective: “Normally it is six kilos, so you essentially had to bring a hundred people to finish it. But if we can bring it down to pastry size, I think we can do interesting things with it.” 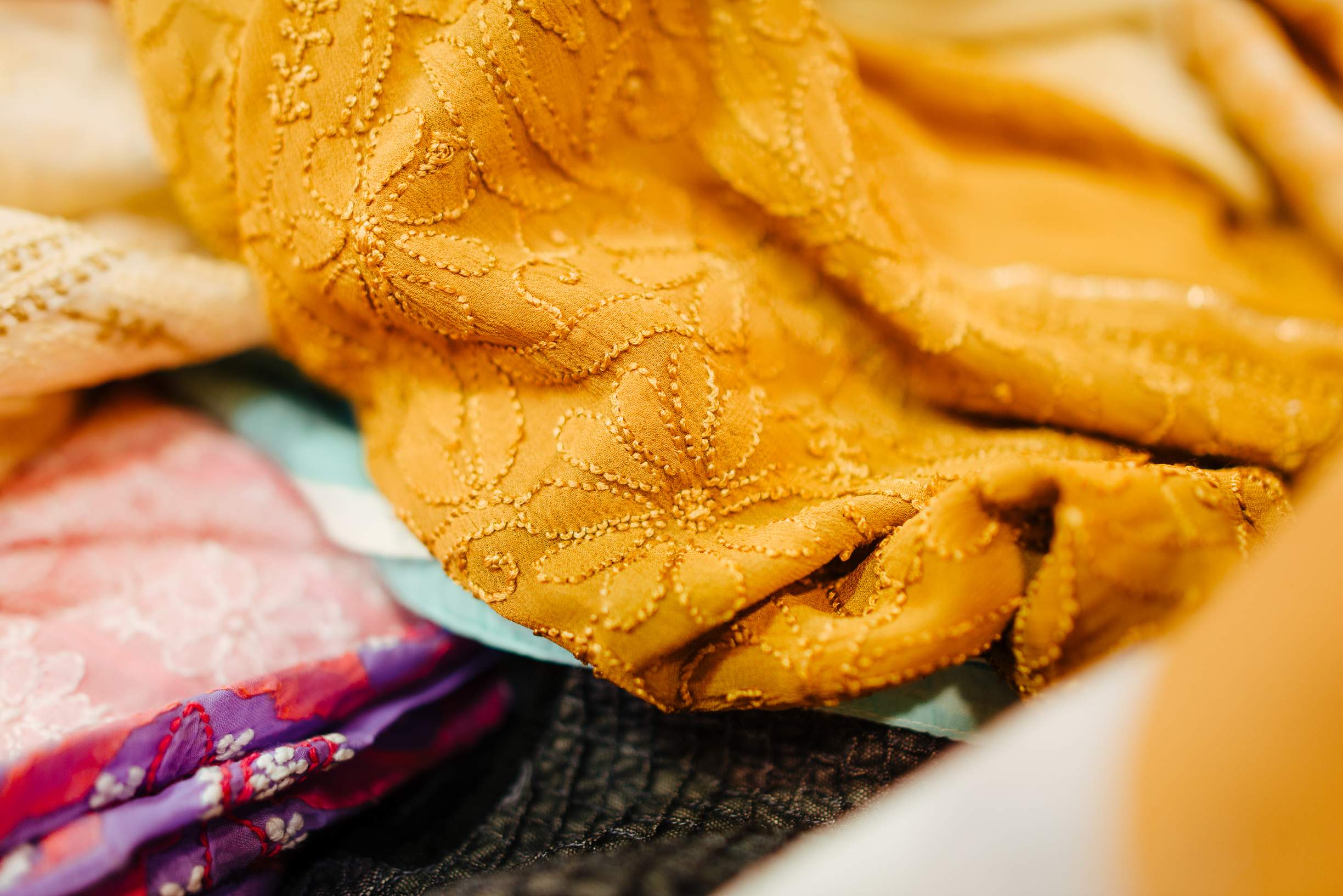 Rolling on the River: Don’t worry about your Chikankari purchase bleeding colours. The fabric goes through multiple washes as a part of the design process, including one in olden times, using river water to erase the block printing marks.

Sweet dreams are made of ittar: Quite the opposite of perfume, meant to be dabbed on pressure points, ittar is rubbed between the fingers and then applied on your sleeves.

A tale of two princes

Ali and Amir Khan Mah-mudabad are poles apart. Ali, admittedly, is 33 going on 80 — a philosopher, poet and Political Science professor at Ashoka University. While his brother Amir, only a few years younger, tells us he is 31 going on 16, loves blaring pop tunes in the shower and has pressed pause on a career as an investment banker in London for a PhD in History at Cambridge. Groomed at Ivy League schools that led them to places as far-flung as Massachusetts and the Middle East, they  switch from impressive British diction to traditional Urdu with ease, steer conversations on world politics and weave in pop culture acronyms with the same élan. Here’s a glimpse into the regal life of the two dashing
princes. Before you ask, the answer is yes. They’re single. And no, they are not on Tinder.

What was it like growing up in a palace?
Ali: We never thought of it as a palace. At age five, we didn’t even know the word palace.
Amir: I remember wearing kurta-pyjamas and playing cricket in the garden.

That’s a shocker. How come?
Amir: This was definitely under the radar as far as my mother was concerned. The palace is big place to roam around in, so no one would catch us slipping off to eat Maggi on the roof.

Growing up, were you allowed to enter the kitchen?
Ali: We loved going into the kitchen. The masalas, the balance... Also, food would often become a dialectic. My father would often ask us at the table what was wrong with something or what was missing.
Amir: Yes, there are stories about me cooking terrible tikiyas (Indian short bread) when I was little, running around in a kurta and diapers...

What is the oldest recipe in the Mahmudabad kitchen?
Ali: I would say that is the Sahnak, which is not a single recipe per se but a culinary tradition that dates back to Noor Jahan’s time, who  brought it to Mahmudabad. This is a day of lunar birthday festivities with a series of offerings like rice tempered with ghee, dahi and balai (the top layer of milk that you skim on boiling) and more. But only the women were permitted to taste.
Amir: We’ve begun documenting the recipes — several of which have been passed down in handwritten Urdu from great-great aunts and so forth.

With changing social trends, have the customs of courtship changed too?
Amir: Neither of us is on Tinder. (Laughs). No, we meet people like anyone else. My parents met each other at Cambridge. So there’s no compunctions on us to follow any set path.

Ali:  Ideally, we want to find partners who call Mahmudabad home.
Amir: If someone loves me then they have to love where I am from, and that is an important part of my identity. 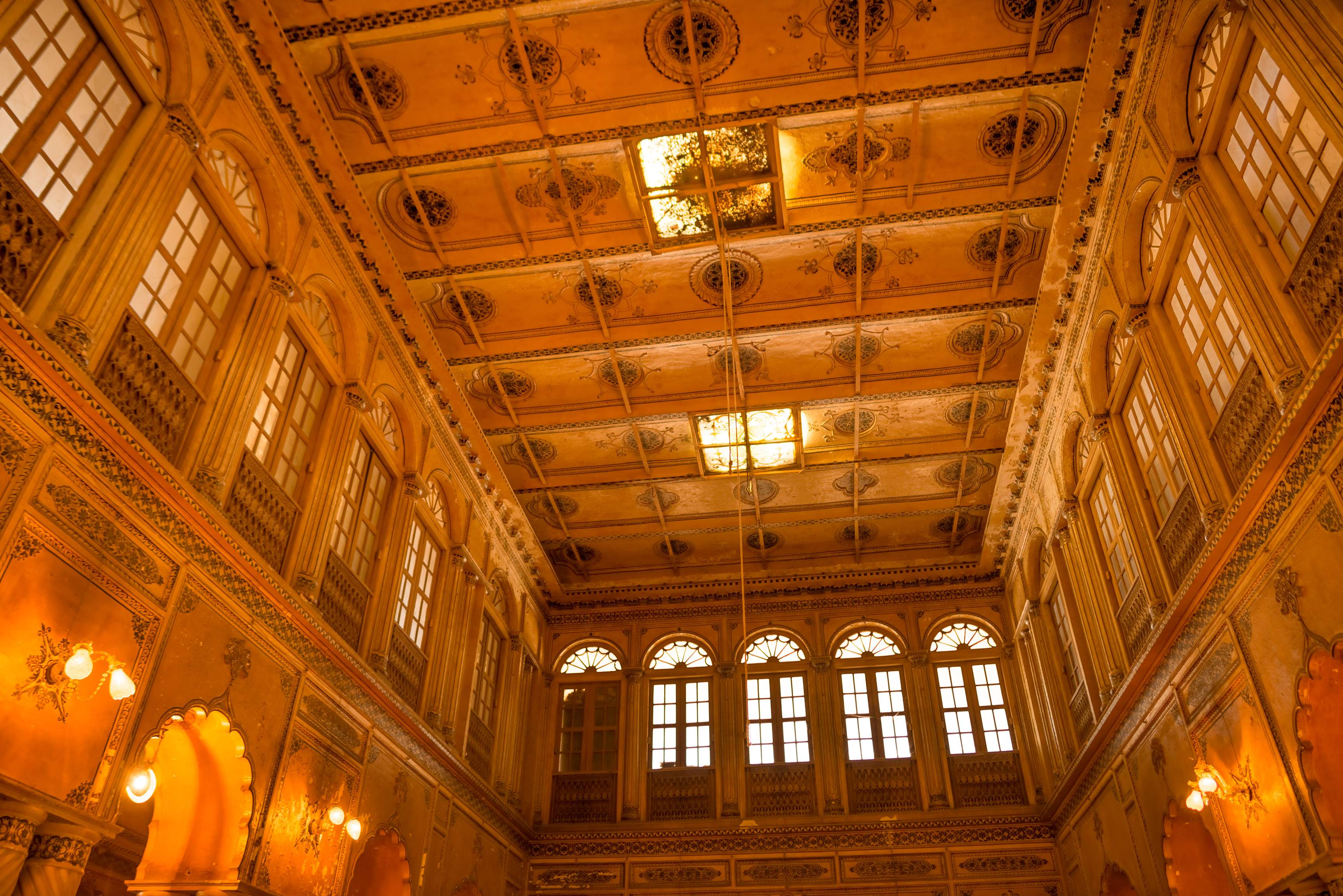 Is there WiFi in the palace?
Yes in parts. But it doesn’t get through these walls. So it doesn’t go from one room to another.

Does the royal closet include T-shirts?
Only to hit the gym.

One dish your chefs would showcase if they got to do a MasterChef appearance
Kharche-ka-anda. It’s a deep fried egg. Crispy on the outside and is very fluffy on the inside with a soft yolk, this breakfast dish is ubelievable and really simple to make. With close to 20,000 books in the royal library of Mahmudabad, one can chance upon early editions of 19th century classics by Dickens alongside literature in Persian, Arabic, Urdu Latin and Greek. With grants and funding, the process of digitising the poetry section was started two years ago. Definitely worth a mention is the section with the complete works of Punch — a satirical British weekly magazine started in 1841, which went on to publish  writers like WM Thackeray and PG Wodehouse. Read by the London elite in those days, this was the publication that helped coin the term ‘cartoon’ with its humourous illustrations.