Travel Prague, the city of 100 spires

A day off between hectic schedules, in a far away city, is too scarce a luxury to let go of idling. I prefer the road to reach Prague, or Praha, about 300 kms from Nuremburg, to keep abreast of life through Europe’s countryside. Lukas, the cabbie, is a Czech who settled in Nuremburg during the times of German unification, and is well-informed about Prague’s 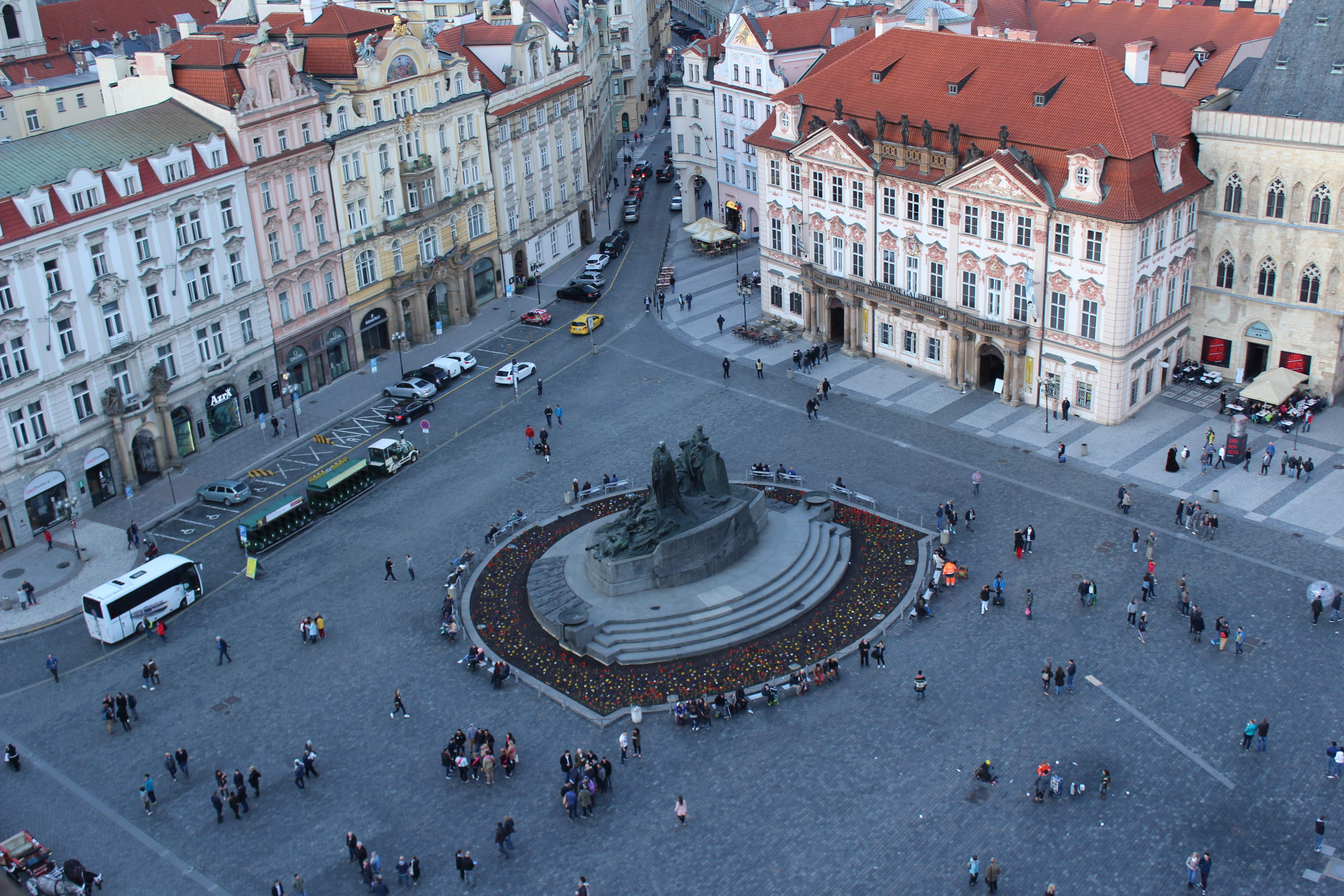 demography. He doubles up in the role of a guide, and offers insights about the region’s tempestuous past. The withering flora along the stretch, sporting multi-hued branches with a blend of vermilion, pale green, blood red and deep grey, look ravishingly magical. I would suggest a long ride through Europe’s road network at the fag end of autumn, when all of Europe is draped in myriad colours.
Lukas, who makes a decent living driving guests to Prague, breaks the icy calm by summing up the transition of the Czech Republic from the iron-clad communist era to a more liberal republic with a cool one-liner — ‘a few hundred visitors, mainly from the eastern bloc in those times, to tens of thousands now, from across the world’. He recounts with the finesse of a theatre artiste, the gory episode of the gouging of the eyes of Hanus, the chief architect of the astronomical clock, in the dead of night, and the “Prague Spring” tactics of the locals switching and swapping street name boards to confuse the advancing enemy. I thank my local handler for handpicking Lukas, as I am spared of hitting Wikipage each time I need a detail or two.
An hour through the ride, the cab grinds to a halt before a makeshift eatery, where super-moon-sized pumpkins are stacked. In fact, I see a lot of such stalls through the stretch, given the peak harvest season for pumpkins in the region. We order a bowl of pumpkin soup with grilled steaks, which smells so good and refreshin gly hot, but not quite delectable sans spices and salt. While I pretend hard to stay good with its bland flavor and manage to push the soup through unrelenting gustatory glands, Lukas seems
to relish every drop in the cup.
At the last sip of the soup, the calm place suddenly springs to life, with clip-clops audible from a distance, as a dozen hooves emerge from a back-alley. It is the beer festival in Bavaria, bringing out horse carriages and coachmen in traditional headgear, carrying barrels of fresh beer from a nearby brewery.  The dusky sky hues, few litters and stained walls, and the glut of Skodas crisscrossing —a picture in contrast to Germany, I assume, announces the arrival of Prague. The age-old adage, “much water has flown under the bridge”, syncs aptly with River Vltava gushing under the famous “Charles Bridge”. The river stands as a quiet witness to the region’s elapsing power equations, sharing both the pains and gains of an exacting era spanning over 10 centuries.
The weather assist has been a pleasant surprise, considering the onset of winter, with a sunny day extending beyond evening, which we want to make use of judiciously. We decide to cover the city by foot, as much as possible. Fortunately, most of Prague’s cobblestone streets are narrow and spared of cars, allowing one to  stroll leisurely along the graceful medieval structures. These streets have a unique style, having escaped the destruction of historic wars. I spend a lot of time ambling around in my own orbit.
From here, we move to the old town square, housing the much-fancied Astronomical Clock, an amazing masterpiece of the 15th century, with an hourly chiming mechanism, 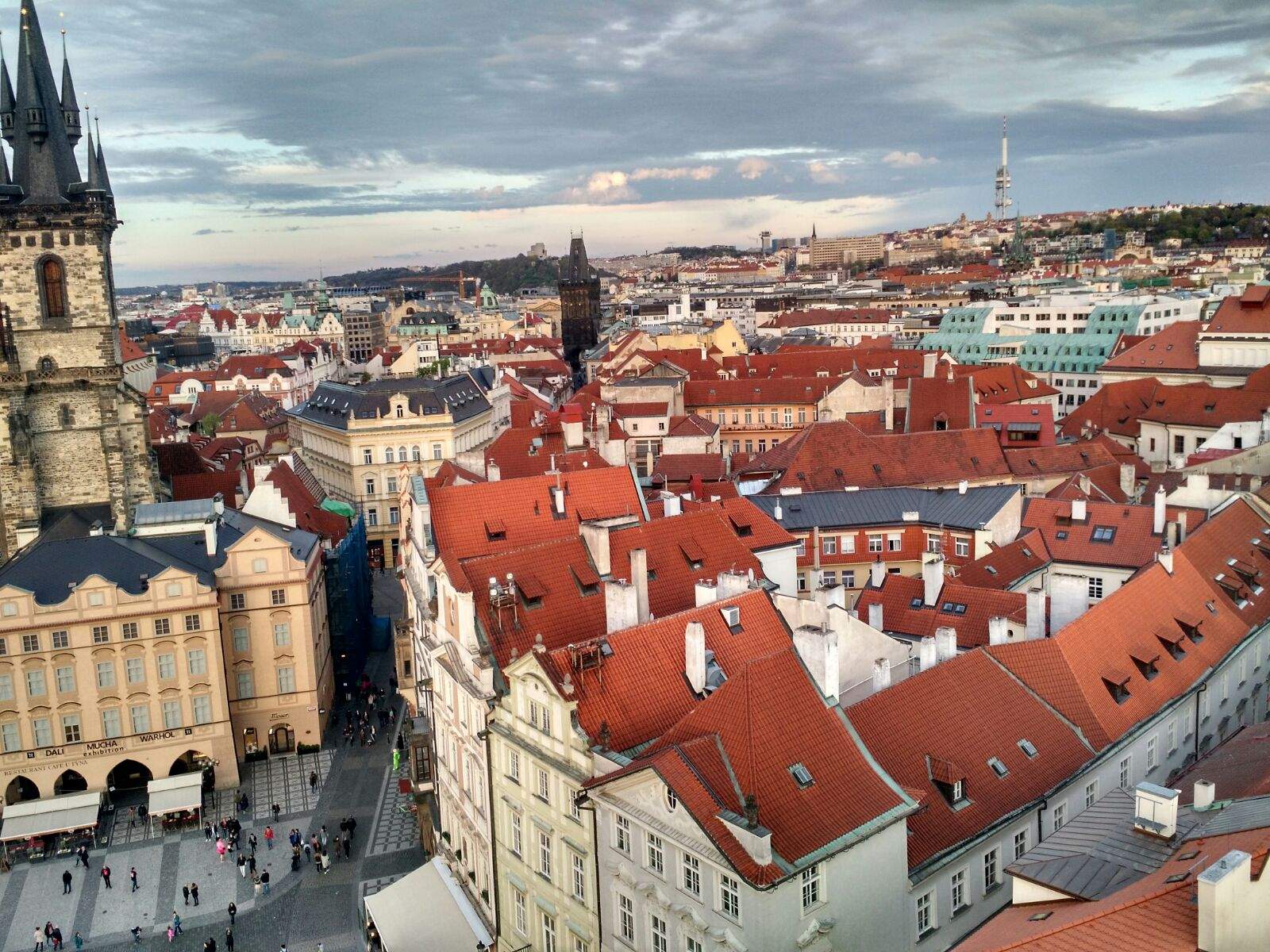 known more for its nerve-wracking legendary tales. With a large swarm of guests in customary hats occupying every bit of vacant space,  the place speaks of eccentricity. As the clock turns its first pendulum to strike the bell, the obsessive crowd gets super-hyper, demoting the very purpose of the visit to a mere selfie show. Much of the time here is wasted swapping cameras. The stately clock, flanked by four figures representing Vanity, Greed, Death and Lust, is a masterpiece
and I am convinced that if the eyes of its architect, Hanus, were not gouged, Europe would be home to more masterpieces.Visitors claim that the clock is the most photographed monument in the world. The Royal Castle, an edifice representing shifting powers from a monastery to a monarchy, has a tumultuous history. The castle,  spread over 18 acres, is seated on an elevation. Guests with weak knees can take a tram to scale the height, although, I suggest ascending its royal passage, abutted by thousand-year-old structures on its sides, for a wonderful view of the city. I see a growing crowd with diverse members, from far-east Africa to China and India, beside fellow Europeans, waiting to buy tickets. The shutterbug in me erupts the moment I enter the enormous princely chambers. I merrily make shots of whatever zooms through my Sony digital camera, without bothering much about the castle’s finer details.
For history buffs, The Royal Castle initially began as the Church of the Virgin Mary in the year 870 AD, and was then the official residence of the highest representative of the Church, before graduating to become an Imperial seat, and the centre of several dynasties ruling the region earlier known as Bohemia. The blend of Romanesque and Gothic French architectural styles validates the presence of external powers in the region. Within its walled precincts, sprawling over 70 sq km, I am assured of a great r 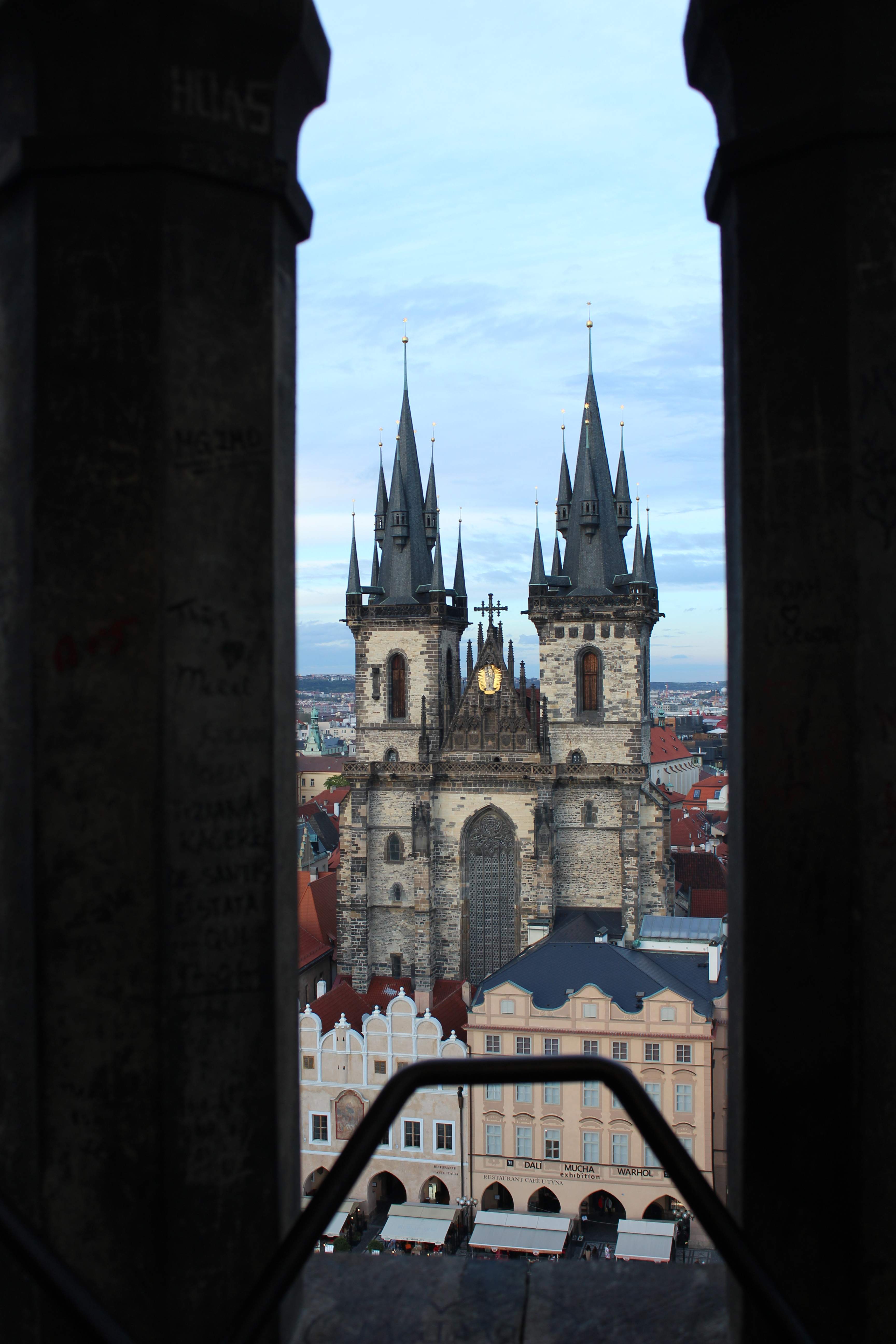 endezvous through the medieval past, spanning over 10 centuries. Major attractions include the 14th century Gothic Royal Palace built by Emperor Charles IV for state functions, the Vladislav Hall meant for coronations, banquets and markets, and the St Vitus Cathedral with an eclectic mix of architecture and stunning stained-glass windows depicting the Holy Trinity and the Last Judgement. There’s also the Old Powder Tower, where royal convoys take to for coronations in the Cathedral, The Golden Lane of goldsmith shops,  the Royal Summer Palace with its splendid décor, and the  Castle’s Riding School. It is interesting to notice that Prague, with its monuments such as the Jewish cemetery, was spared of destruction through several wars.
After three hours of ambling, we hurry back to the foothill in a tram, passing through the famed Charles Bridge, flanked by an alley of statues of saints. It is hard not to be impressed by the sights from this bridge. Touching the statue of St John of Nepomuk in the bridge is considered to bring luck, where guests queue up to make a wish. I make one too, knowing exactly what to ask for — the chance of returning to this city of stately architecture.

The writer is a travel enthusiast based in Chennai.

Fact file
Getting there
By rail Prague is well-connected with the rest of Europe through rail
services like the Eurail and Rail Europe, which offer a variety of trains to Prague from various locations. The main station in Prague is the Praha Hlavní Nádraží. Its wide road network also makes for inexpensive travel

By air The Václav Havel Airport Prague is situated 20 kms away from the centre of the city. It takes 30 minutes to reach the city centre by bus from the airport. A number of airlines service the city through this airport.

Accommodation You can get accommodation and food for half the price  compared to most cities in the European Union. Several hotels of one star to five star ratings are avai 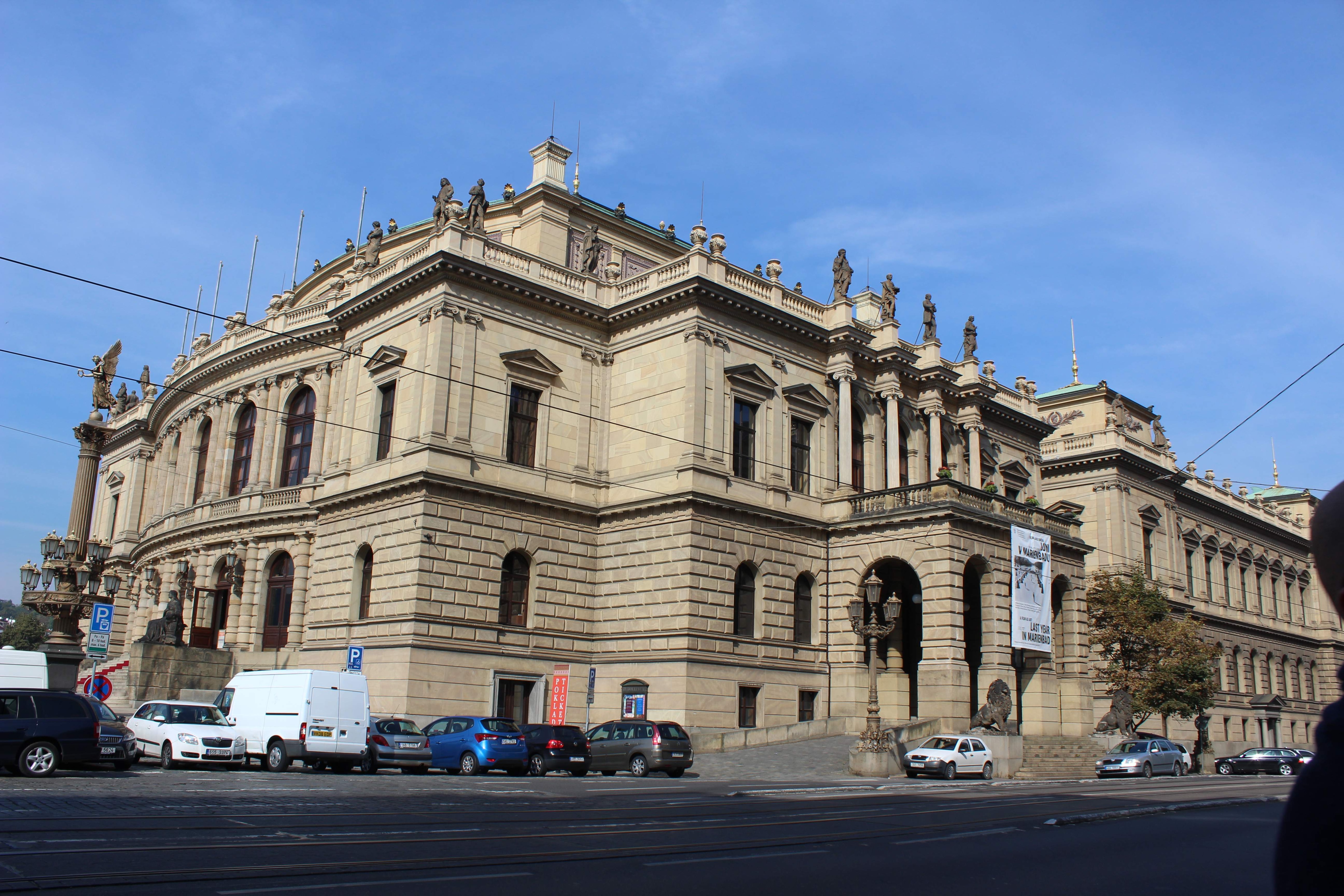 lable. Apartments are given on rent, where you are free to cook. India-based eateries are famous for their varieties of naan and biryani.

Time to visit All year long, provided you can withstand the freezing cold. X’mas  is great fun to watch. The crowds swell during July, the main vacation period.

Places to see From churches and museums, municipal buildings to the Theatre of Arts, the list of attractions in Prague is endless. Detailed planning is advised.