Serenades sans borders: A journey for ethnic music across cultures and time zones

Beyond wining, dining and sightseeing lies some high-octave exhilaration. This week, we tune into a few fascinating musical experiences from around the globe, to satiate  the culture-hungry traveller’s soul. Certainly, a 21st century bard is a man of many tunes! The gypsy in me looks to the enriching words of Irish philosopher James Joyce: “In the particular is contained the universal”. In turn, the musician in me realises that the soul of a land is expressed through its sound, just as every part of the world bathes a traveller with its unique forms of music and dance, each containing the universal elixir that emanates from the cosmos’ innate harmony, to elicit the ‘aha’ that transcends all boundaries of language and race! Treading beyond stereotypical itineraries, we turn to more endearing and less touristy charms, to tap our feet to unique musical experiences from five diverse regions of the globe. 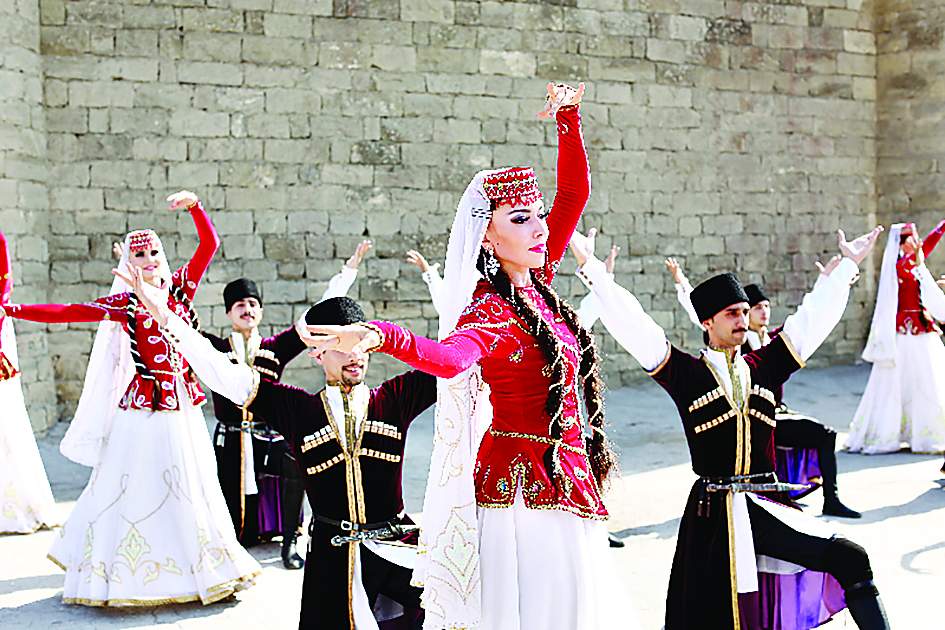 Throbbing with culture and music is central Asia’s fascinating jewel, Azerbaijan, a neighbour of Iran and Turkey, where the late Raj Kapoor still resounds in local cafés, with the tune of Avara Hoon on the lips of every tuneful local worth his salt!

A lesser-explored territory by the Indian traveller, Azerbaijan, formerly under Russian rule, is a treasure house of music and dance, both folkloric as well as classical. Sharing similarities with her neighbours, the country offers much more than clichéd entertainment to tourists. Music seems to flow in the veins of the Azeris, who communicate through sound and rhythm with even first-time visitors from faraway lands! 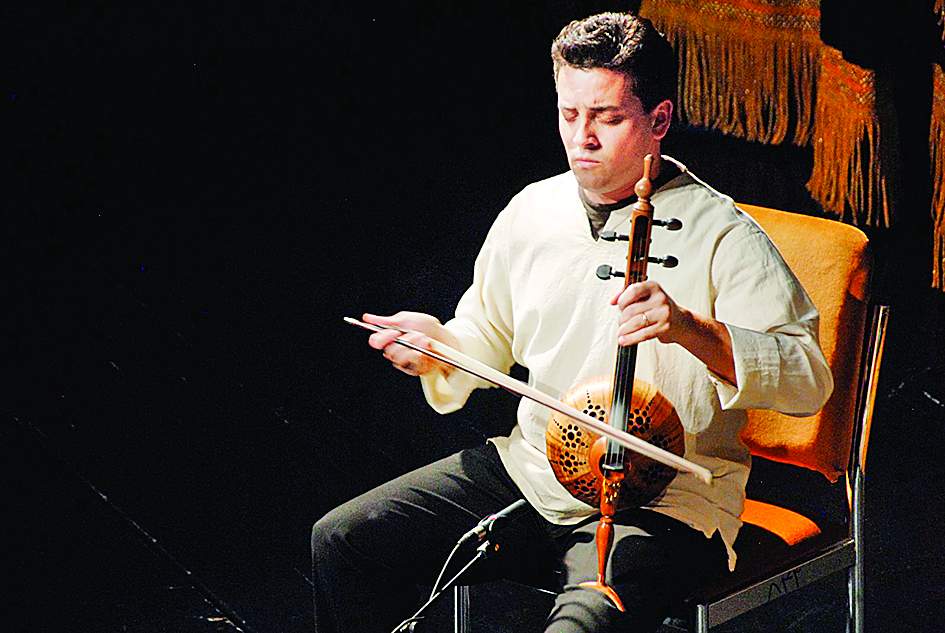 Beyond enjoying exotic gourmet treats and tantalising chai at charming wayside chaikhaneh, or even shopping, witnessing concerts would probably have you postpone return flights, or even miss your flight, if on the same day. The legendary Meyhane or Meyxana, would have any of America’s leading rappers breathless. A boisterous form of folk rap where two or more individuals perform an extempore, crashing call-and-response duet, Meyhane is a perfect blend of rhythmic and linguistic prowess. It is quite like a verbal jugalbandhi where both parties also joke about one another or humorously disparage their opponents. 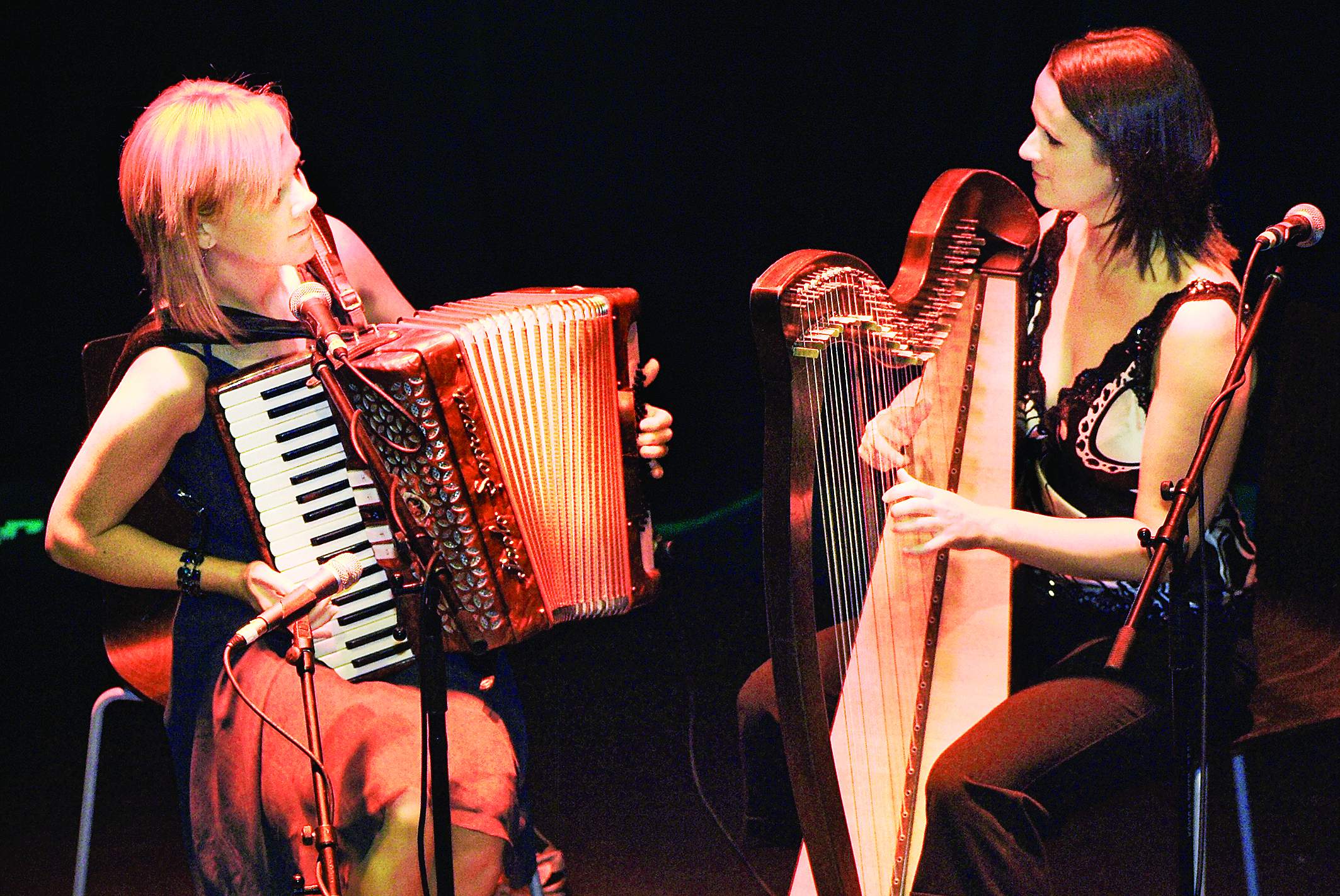 A part of the United Kingdom, Northern Ireland stands tall on the Island of Ireland, with the Irish Republic, an independent country,  in the south. Belfast, Northern Ireland’s capital is swank, organised,  polished and understated, with the scars of communal violence still appearing fresh in many areas of the city. Having witnessed a recent renaissance, Belfast, apart from its regular attractions, is home to intriguing musical forms. The docks from where the historic, ill-fated Titanic made its maiden voyage, the city council hall, and various other places that mark the conflicts between Catholics and Protestants attract international visitors as much as the city’s restaurants and bars.

The trademark of Northern Ireland’s musical legacy, however, are her quaint old pubs! Not to be mistaken for shady, dimly lit notorious watering holes, pubs here are places for family and friends to catch up, or to just revel in music all night! Traditional music is as much a part of concerts and events, as are impromptu affairs, as jam sessions begin around evening and often end up ushering in the first rays of dawn. Informally gathered around tables, musicians make magic on the Uilleann pipes, tin whistles, fiddles, guitars and accordions, and even on vocals, as jigs, reels, laments and ballads fill the air, adding to the old-world charm of the pub’s wooden interiors. Will you go Lassie Go, a famous folk number by Francis McPeake, the family of stalwarts that taught John Lennon of The Beatles, has become leitmotif Northern Irish. The earth-shaking Step Dancing shakes the stage in many pubs, as agile youngsters make the heart skip a beat!

South East Asia’s pristine haven is renowned for its magnetism. A mix of modernism and tranquil charms, Taiwan offers a wholesome treat to visitors at any given time. While picturesque hiking trails, abodes of solace like the Yangmingshan National Park, cycling tours of Taipei, and holistic local cuisine comprise the perfect itinerary for a travel enthusiast, evenings of traditional Taiwanese music offer food for the soul! 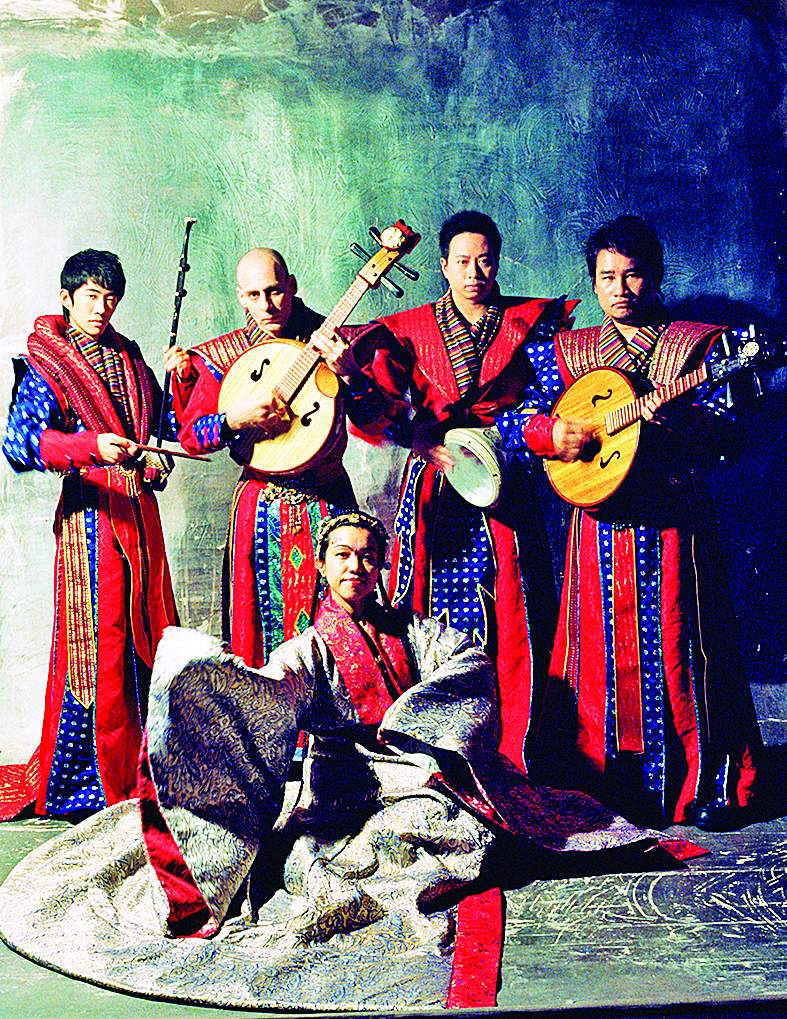 With a formidable Chinese influence, Taiwan also boasts of highly accomplished indigenous artistry. The Hakka Taiwanese opera is related to the unique Tea-Picking Opera, the repertoire of which consists of lengthy songs that tea pickers would sing to each other during the monotonous task of tea picking in the region around Munt Jiulong. Soothing vocals, near meditative dances and cute costumes make up for the inevitable loss of translation.

Aboriginal music, once believed to be dying, has revived in the past few years. With their evocative and universally appealing vocals, artistes like A Mei have even become aboriginal pop icons. Other forms like the hypnotic vocal music of the Bunun tribe often take the stage along with pop, rock and metal acts.

Africa’s northern-most country is the place to soak in the spirit of sound. A quintessential Tunisian getaway typically features shopping in the old Medinas, enjoying gossip and card games over irresistible mint tea, traversing the forbidding Sahara and rejuvenating by the scenic beaches. But, without the manna of melody, any trip to the region is far from complete — Tunisia being the ideal confluence of Europe, Africa and the Arab World. 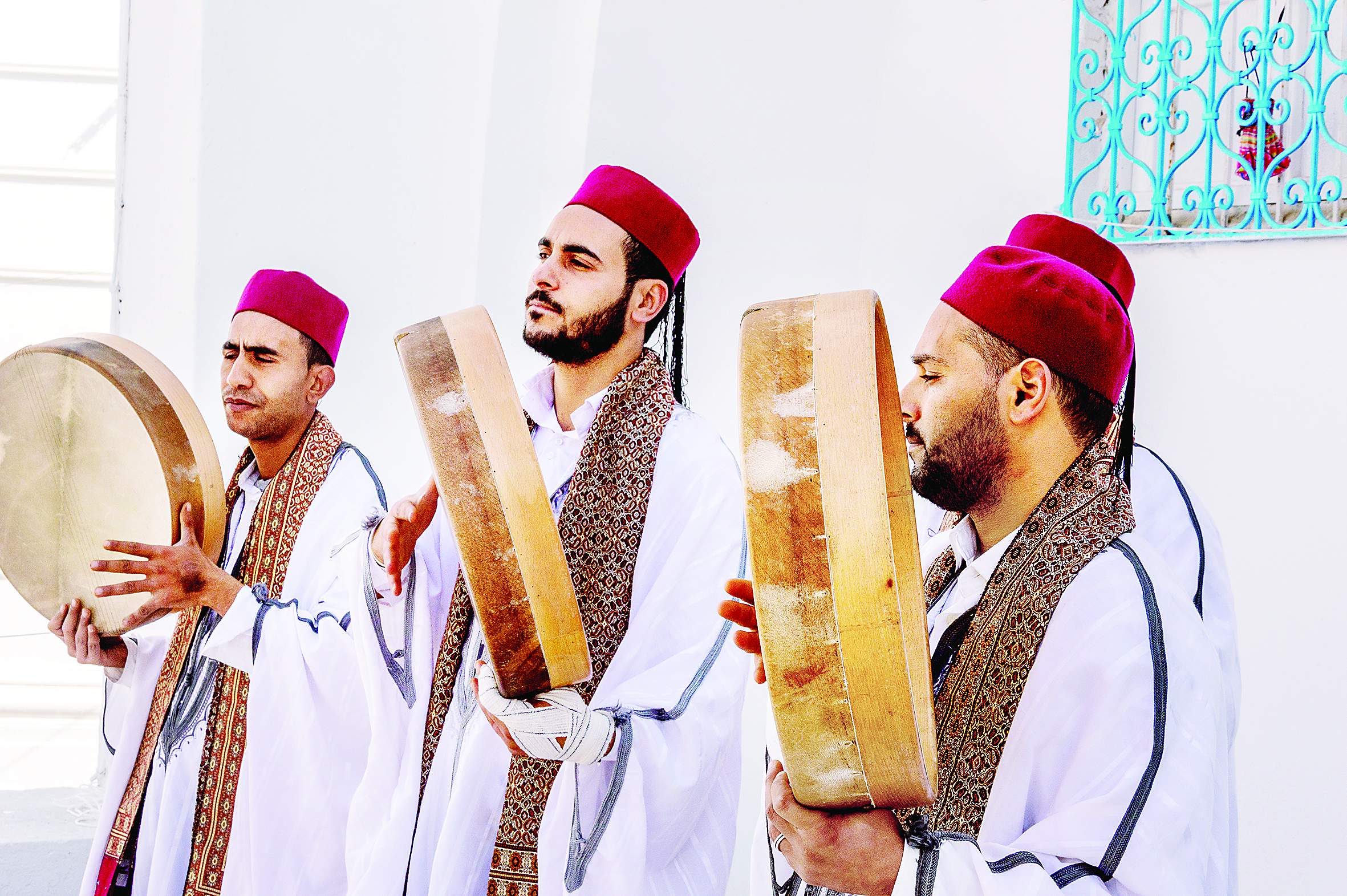 Bearing influences from diverse regions, Tunisia’s music boats of diversity and soulful expression. Classical concerts in the capital Tunis offer a meditative experience with the tranquility of traditional Malouf music calming the senses. Violins, dulcimers, lutes like the Oud and the ancient Andalusian Rebab take you back to the Golden Era of Moorish Spain.

While pockets in the Sahara, like the quaint town of Tozeur, house ardent Sufi musicians who cater to the passionate from the world over, rugged grooves welcome you to the South Tunisian region, especially the Djerba Island, which shares similarities with neighbouring Libya. Mezoued, a hardy and energetic folkloric stream, is all about catchy rhythms on the folk clay and goatskin Darbuka drum, and Mezoued bagpipes that accompany full-throated vocals.

The spirit of indigenous Berber weddings is expressed by large dhol-like drums called Tablah and their earthy tones. Folkloric soirées on the island comprise of Mezoued performances and even incredibly acrobatic folk dancers who cast a spell on the audiences, involving them in spontaneous participation.

The metronomic sway of the safari jeep over the bumpy terrain of the African wilderness is the perfect prelude to a morning of stunning rhythm and raw energy! In Kenya’s Masai Mara, from the silence of dawn emerges a basal, rhythmic grunting. The brown expanse under a pristine blue sky suddenly throws a distant ball of red rolling towards you with mystical fervour! That is what a traditional tribal lion dance ascending to a crescendo looks like. 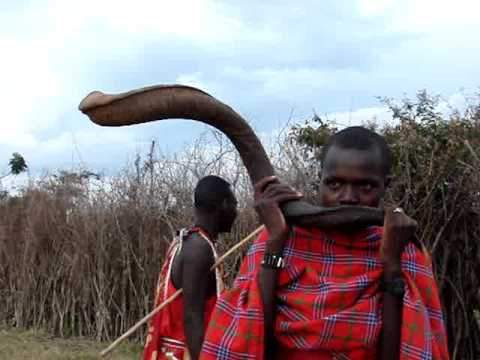 Young Masai men draped in bright red robes and exquisite indigenous jewellery approach you as the dance gains vigour, but surprisingly, none of them look or sound intimidating, thanks to the underlying  sonorocity of their wild dance. The lion dance mainly comprises of high jumps, making the highest jumper the most eligible bachelor! No instruments accompany the dance except for the horn of the Kudu, a type of an antelope, as leitmotif shrieks and grunts mesmerise you! The women of the tribe on the other hand, dance in circles singing heart-rending melodies for healthy offspring, among other themes. 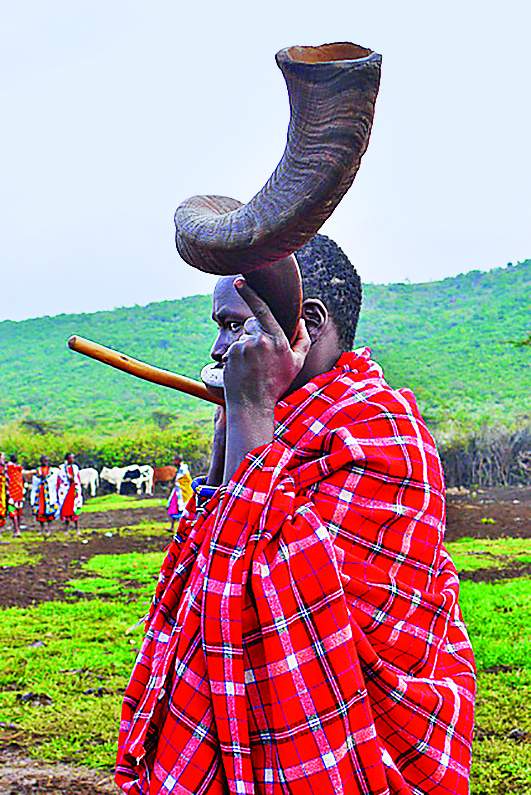 In the coastal city of Mombasa, more relaxed renditions envelope you with Tarab tunes that often incorporate Indian influences, and popular folk tunes on local and Western instruments. This is Kenya beyond pints of local brews, nuts and homely Gujarati cuisine!