If you thought people jumping out of moving cars to do the Kiki Challenge was outrageous, you should know that the new year has started off with yet another bizarre and dangerous challenge - the 'Bird Box Challenge.'

The challenge is based on Netflix's newest movie Bird Box which stars Sandra Bullock in the lead. The movie has shown the world infected with an apocalyptic-condition.

The storyline is such that if the people happen to stare at a certain entity that takes the form of their worst fears,  they are instantly driven to an urge to kill themselves. The only way for the characters in the movie to avoid this certain death is to avoid seeing it.

Therefore, the movie shows the characters in it, blindfold at all times-even as they perform ordinary tasks such as driving, rowing a boat, exploring new places, and everything else you can think of. 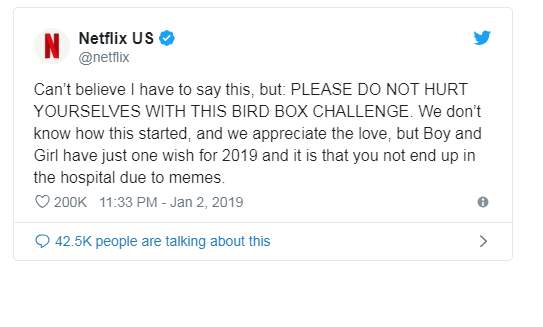 Inspired by the movie, people have now started blindfolding themselves while performing daily tasks. The challenge went viral in no time and sensing the potential danger that it can bring, Netflix has issued a warning on their social media accounts.

When you’re not allowed to see but you can’t skip legs! #BirdBox #BirdBoxNetflix #BirdBoxChallenge pic.twitter.com/miUPquHg6i