World Motorcycle Day special: New to road trips? Kickstart your journey with these tips from a seasoned biker

This Sunday, June 21, is the World Motorcycle Day, a day when most motorcyclists head out on their bikes for a ride to celebrate their passion and the community of bikers. However, this year, with the pandemic, things are quite different. But if you are intending to go on a ride with your spouse or friends, or just want to go on a solo trip, then the story of 34-year-old Siddharth Pathak, a Bengaluru-based telecom engineer and seasoned biker might inspire to head out. Read on to know more:

When and how did you get interested in motorcycles and long rides?
In 1991 (when I was just 5), a film was released- ‘Phool aur Kaante’ in which Ajay Devgan had an entry standing on 2 parallel motorcycles along with some other motorcycling stunts. It kind of fascinated me a lot and I have watched that movie more than 1000 times till now. Since then I wanted to own a bike.

In 2016, when Himalayan was launched, I fell in love with it and immediately bought it (if you see the image of Himalayan and Ajay Devgan’s bike, you can understand the reason why I bought it immediately). As soon as I bought it, I started getting involved with the motorcycling community. It’s almost four years now and I have clocked around 55,000 km covering almost half of India.

Tell us about your first ride...
My first ride, however, was in 2011 ( on our honeymoon ) when we went to Manali. We took a Royal Enfield Bullet 500 on rent and went all the way up to Rohtang pass riding it. I think that’s when I first rode a motorcycle in the Himalayas. We kept exploring areas around Manali for next three days and just loved it. After coming back to our jobs, we were too keen to buy a new motorcycle but it was financially and practically not possible at that time. But we revived our interest in 2016 when we bought the Royal Enfield Himalayan. 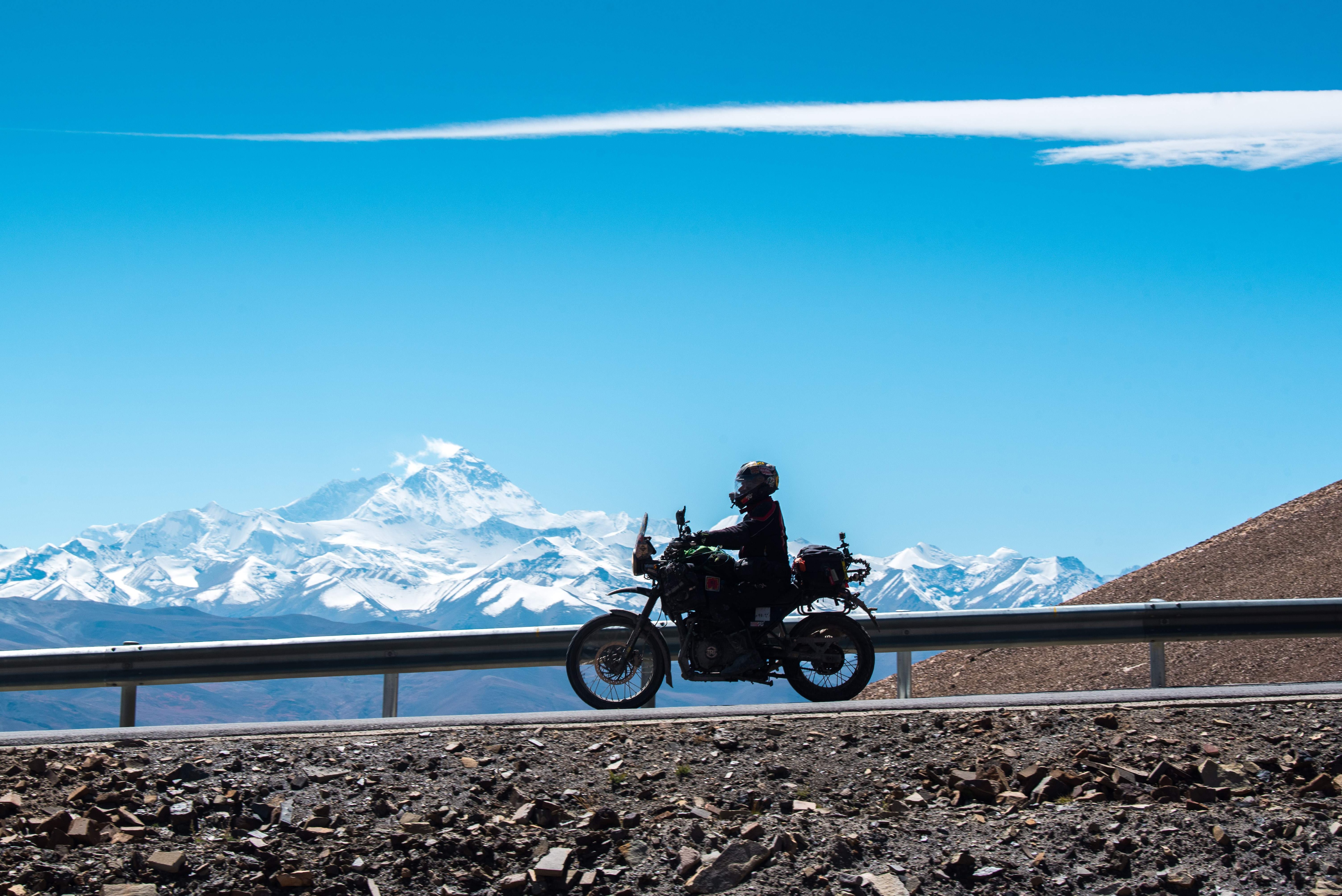 Since you have covered so many kilometres and places, can you give rookie bikers a list of essentials to carry when going on long rides?
I recommend carrying a set of tools (varies with bike model) apart from the standard tool kit. More importantly, a rider should know how to use the right tools and spares. In most remote areas, the puncture shops can fix the issue but don't know to fix the wheel back. Royal Enfield conducts periodic sessions on DIY at all major service centres, I suggest one should attend those to learn better.

Which is your most memorable ride? Any anecdotes from other trips?
The ride to Mt Everest Base Camp, Rongbuk, Tibet (China) is one of my most memorable trips. It was a dream trip, especially because I never even imagined that I will get a chance to do so. Have you ever imagined riding on a road from where you can see Mt Everest right in front of you? People spend almost their entire lives just thinking that one day they will see Mt Everest in real and here I was, riding almost 3500 km from Bengaluru, crossing three countries into Tibet riding my own bike to Everest Base Camp. I was literally in tears when I stood up there.

Arunachal Pradesh: Started from Tawang towards a lesser-known place Zemithang, the weather turned bad and then to worse. We (me and my wife) covered only 50 km in five hours in spite of riding continuously. The road was terrible and we didn't spot any human being or vehicle on the road during those five hours. We survived on Nutri bars the entire day and finally got to eat Maggi at the end of the day.

Majuli, Assam: Started from Tezpur to reach Majuli, we had to cross 3 river streams in small boats full of people along with our bikes, people treated us like aliens. One of them was actually referring to me as a foreigner to others until I spoke to him in Hindi, which left him awestruck.

Royal Enfield Unroad, Goa: Two to three leeches were stuck inside my socks and I didn’t even realize the entire day, when I removed boots at the end of the day, it was full of blood. Luckily leech bites didn’t hurt.

Royal Enfield Scramble, Karnataka: Misjudged a tyre obstacle and went with a higher speed, fell flat on handlebar bending it badly and a bad wrist injury but completed the track with the same pain. It still hurts after four months. 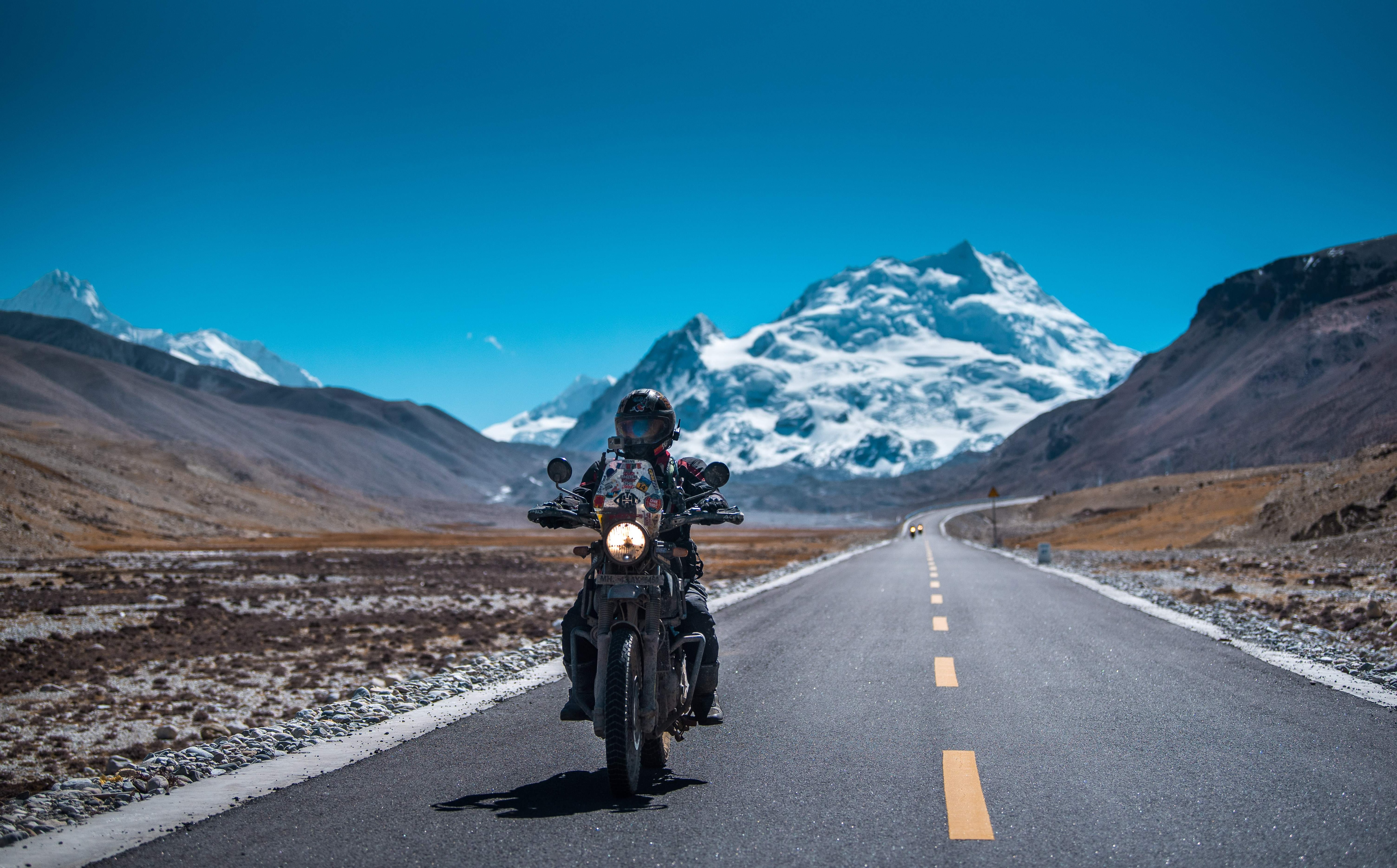 Now that you ride with your wife, what safety precautions do you take? Is it the same when riding alone?
Frankly, it's not the same. Travelling with a woman in our country on a bike is not very common and it grabs a lot of attention. We need to think twice even if we have to stop for a tea break at any place. Also since we both ride with complete gears, people notice us more. Most of them believe that we are just some random college couple doing something wrong. Also considering the remote places we explore, we find it difficult to find basic facilities.

What is your check-list before you start riding?

Your advice to people who want to start going on long rides?
More than your physical strength, it's your mental strength which matters. You should be ready to face new challenges and surprises, all those should be embraced with a smile. Apart from that, you should obviously prepare and understand your bike well. There are two different approaches to start going on long rides, either you can start exploring short distances of 50 km or 100 km around your city and keep increasing the distances with time, or make up your mind and just set out on that first long most awaited journey of a 1000 km and face whatever comes through. Also, most new riders prefer to ride in groups and not solo but that also depends on your choice and ability to handle situations. The most common notion about motorcycling is that it’s a dangerous thing to do, I agree but everything is dangerous in life, it depends how you look into it. People get hurt while walking on the road, or even by slipping on a wet floor, so why not ride and experience something new in life.

What are the mistakes that you have learnt from and would advice new bikers never to make those?
You never stop learning on the road. But yes, here are a few tips: Never go beyond your limits, we always tend to go overboard and land up in a big mess. Whenever you go out on a ride, make a promise to yourself that you will ride in such a way that you return on your bike and not in an ambulance. As we biker’s say, never ride faster than your guardian angels. Get into motorcycling if you love it and not because of peer pressure. You will be able to continue it for long only if you love it. Respect each other, just because you own a 650CC motorcycle and the guy next to you is riding a 100CC bike, it doesn’t mean that he is inferior.