No, this is not the Gotham, nor the Joker that one would recognise from 80 years of established storytelling, depicted on page or on screen. Rather, this is an original, standalone origin story of this infamous character, the tale of an atmosphere of unrest fostering a man on the brink who, like his city — and likely, because of it — grows closer to the precipice: Arthur Fleck.
Filmmaker Todd Phillips explains, “I love the complexity of Joker and felt his origin would be worth exploring in film since nobody’s done that and even in the canon, he has no formalised beginning. So, Scott Silver and I wrote a version of a complex, complicated character, and how he might evolve — and then devolve. That is what interested me — not a Joker story, but the story of becoming Joker.” 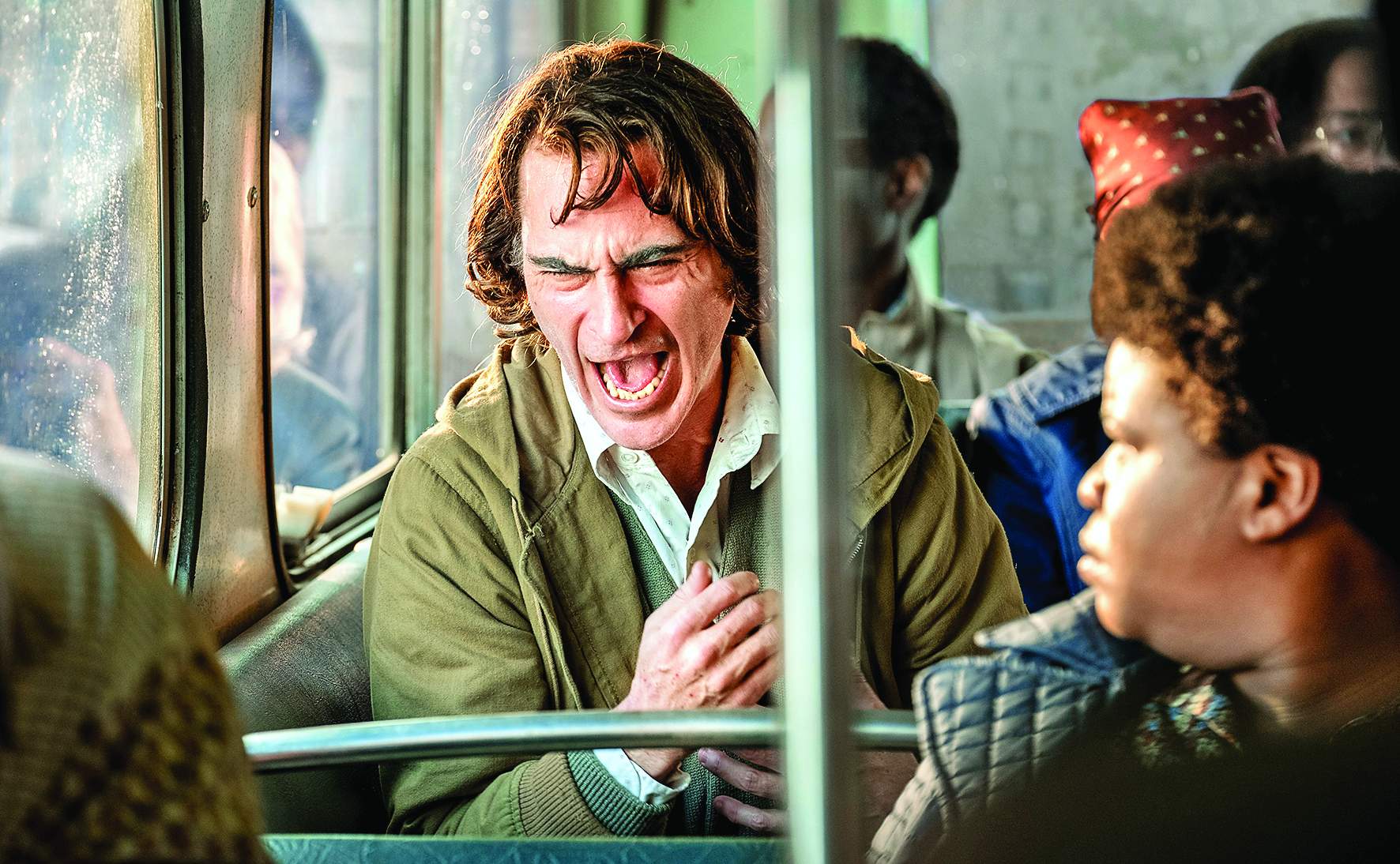 Down the dark side
Forever alone in a crowd, Arthur Fleck (Joaquin Phoenix) seeks connection. Yet, as he trods the sooted Gotham City streets and rides the graffitied mass transit rails of a hostile town teeming with division and dissatisfaction. Arthur wears two masks. One, he paints on for his day job as a clown. The other, he can never remove — it’s the guise he projects in a futile attempt to feel like he’s a part of the world around him, and not the misunderstood man whom life is repeatedly beating down.

“One of the themes we wanted to explore with the movie is empathy and, more importantly, the lack of empathy that is present in so much of Arthur’s world,” Phillips states. He adds, “For example, in the movie, you see the difference in the way little kids and adults react to Arthur because kids see the world through no lens. They don’t see rich versus poor or understand a marginalised individual the way adults do. They just see Arthur as a guy who’s trying to make them smile. It’s not inherent, we have to learn how to be unaccepting of others and, unfortunately, we usually do.” 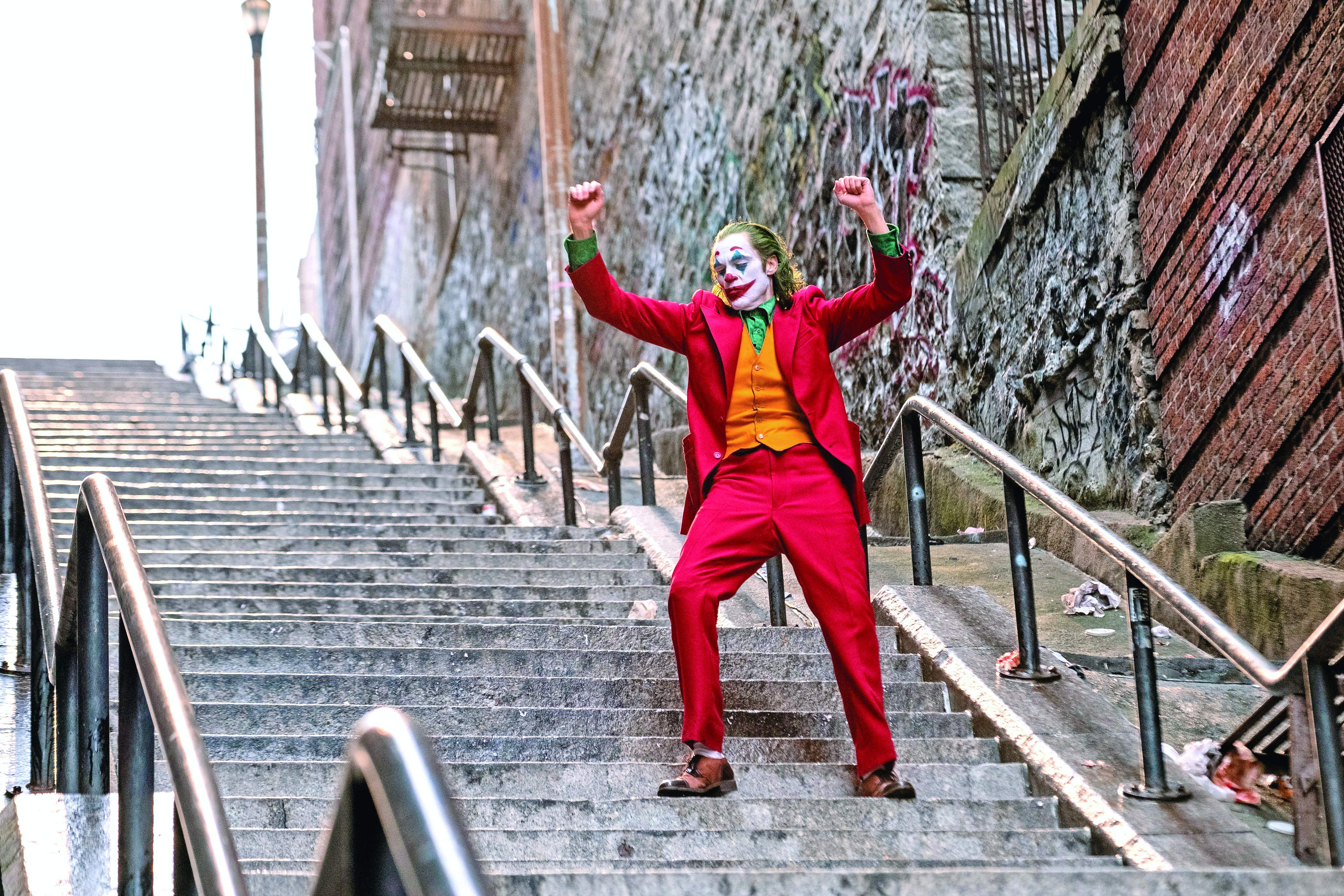 ‘Happy’ days
The truth of Arthur is complex. Father-less, Arthur has a fragile mother, arguably his best friend, who nicknamed him ‘Happy’, a moniker that’s fostered in Arthur, a smile that hides the heartache beneath. But, when bullied by teens on the streets, taunted by suits on the subway, or simply teased by his fellow clowns at work, this social outlier only becomes even more out of sync with everyone around him.
He attempts to do stand-up, his dream vocation, and one for which he prepares by watching other comics, hoping to catch their tone and timing and adopt it for his own. Hoping that he, like the others, will captivate an audience with witty observations and find an even larger form of acceptance in their applause.  “Unfortunately, how he sees the world and, frankly, what he thinks is funny don’t really work,” Phoenix explains. “He doesn’t understand their kind of humour and he isn’t able to mimic it, either.”

An apple a day
Phoenix and Phillips developed a close relationship during filming, as they worked to discover and define the finer points of Arthur’s dual nature. With careful consideration, over the course of the story, and a traditionally unreliable narrator like Joker setting the scene to emerge from within, the chrysalis of this socially awkward and increasingly desperate man, they left the very truth of Arthur Fleck’s story open to interpretation, like Arthur’s own experience.

Phillips observes, “All the preparation disappears into the performance. Joaquin is so methodical about it that there’s not one moment where you see him switch from Arthur to Joker, it’s all done with a very measured pace.”

A huge part of the actor’s dedication to Arthur’s presentation was to drop 52 pounds, by consuming little more than an apple a day. Phillips confesses it was his idea, stating, “I wanted the character
to look hungry and unhealthy, like a malnourished wolf.” Portrait of a villain
To create Arthur’s — and, via stages, Joker’s — look, Phillips sought out costume designer Mark Bridges, who had designed for Phoenix in both The Master and Inherent Vice. Bridges notes, “Those films are also set in periods of transition, one in the 1950s, and the other in the 1970s.” As in the former, Phoenix’s physique became quite slim by the time filming began.  “I honestly don’t know how he does it,” Bridges says, of Phoenix’s discipline. “But we started fittings six months before filming, so it became a part of my collaboration with him, too —not just tailoring things to fit, but are we hiding his physique in this scene, are we playing it up in that one?”

For the period in which Joker takes place, Bridges observes, “If you’re true to say, 1981, there was a certain range of colours and colour combinations available in stores. We used a lot of blue, brown, maroon, mauve, gray, navy, khaki… we moved away from the burnt oranges and greens of the ’70s, though I still threw in a few for the story’s sake.

But just by adhering to that palette, it automatically feels like some other time, because it’s not what they’re selling in stores right now.”

Throughout the film, Arthur dons a clown face of varying degrees for various performances. His ultimate Joker look was designed by Phillips and Phoenix as an exaggerated version of Arthur’s regular maquillage and executed to perfection by makeup department head Nicki Lederman and her team, utilising the basic red and green of Arthur’s clown character. Lederman herself created a unique shade for Arthur’s tears from various pigments she had on hand, dubbing it antique blue. 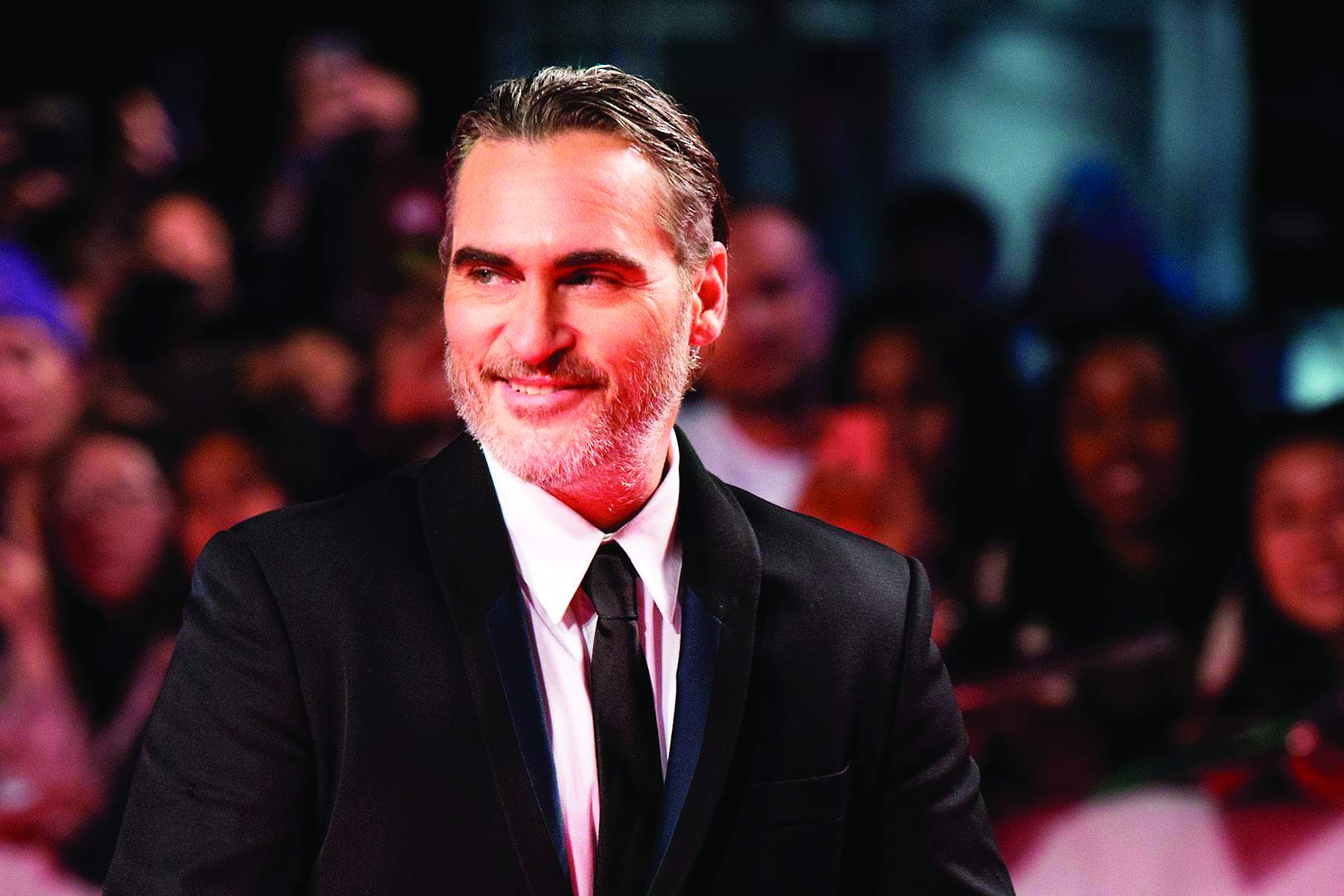 In a rare interview, Joaquin Phoenix talks about becoming Joker, his partnership with director Todd Phillips and more. Excerpts:

When you first got the script for Joker, what made you want to take on the role of Arthur Fleck?
Well, I thought it was bold, like nothing I’ve ever read before. It’s certainly different than any movie that would fall into the superhero genre, but it was even different than dramas that I had read. It seemed to have so many different flavours and tones.

Joker, classically and in this film, is an unreliable narrator. Does that aspect of his nature affect how you make your choices as an actor?
There were times where I thought he would enjoy altering his story, and the effect that it would have on somebody, and how somebody might feel about him.  There are other times where he’d alter it just because that’s what he really believed. Usually, with characters like that, it’s frustrating because you want to understand what their motivations are.  But it became like a liberation for this character, and I realised that it could go in any direction.

Todd Phillips has described your work together on this film as a true partnership.  Did it feel that way to you?
Yes, and it wasn’t only when we were on set. After we finished shooting, or on weekends, we would call or text or meet up and talk about the next scenes. I felt like we were so unified throughout this process that if one of us ever got to the point where we weren’t feeling inspired, hopefully, the other one would inspire them. There were many times it was quite surprising, how much we thought of the same thing, the same solution to a problem. 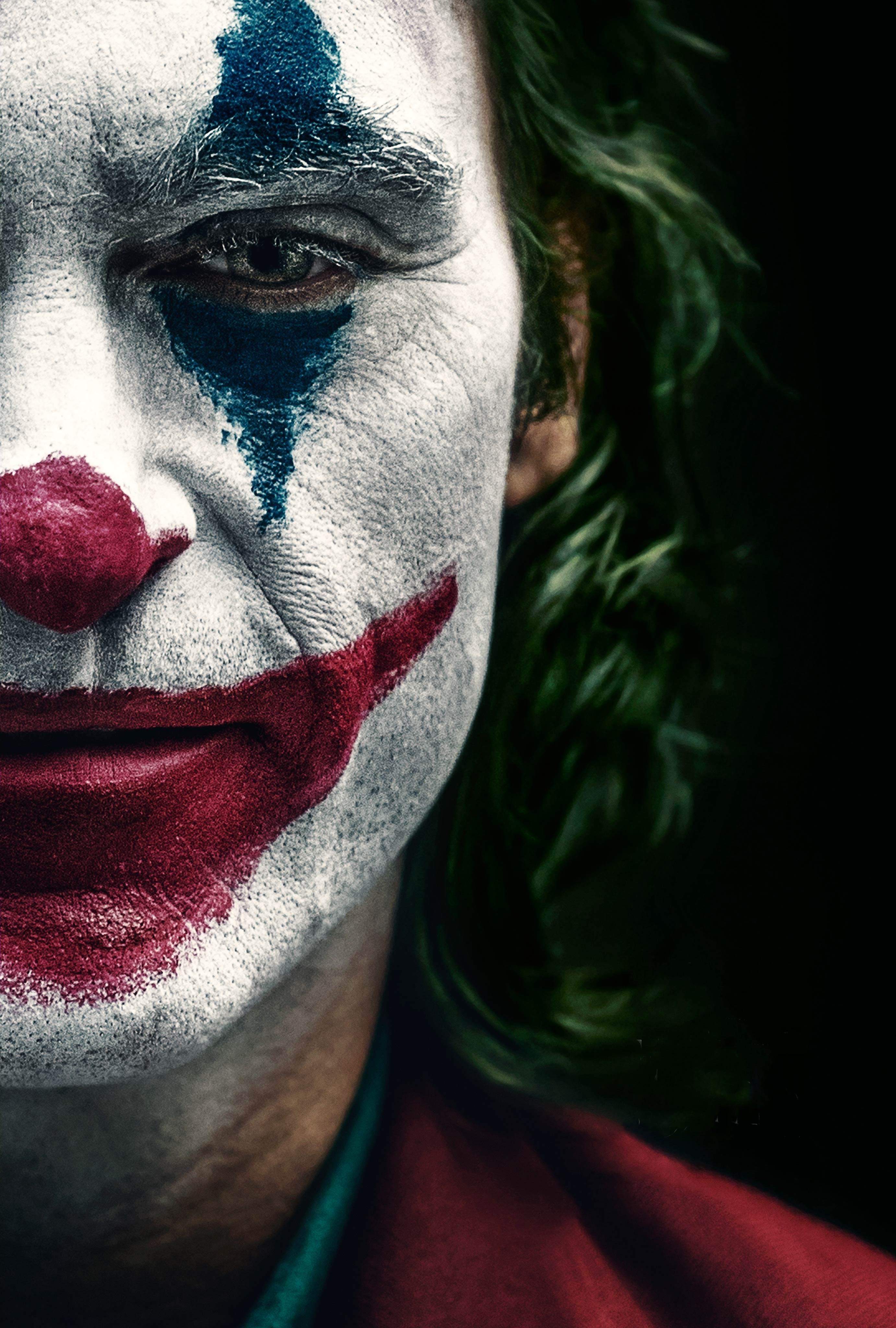 Speaking of problem-solving, there is a scene in a bathroom that is a pivotal moment for Arthur — how did you and Todd work together to create what was going to happen in there?
The preparation was the study of dance and movement, but we didn’t find the real intention of that scene until we went to set that day.  When we arrived, we felt that we still needed something that would illustrate the emergence of a different part of Arthur’s personality. We landed on the idea because I had been studying all of this dance, and he started playing this cello music; it was a really effective piece of score that he had just gotten the previous night. And, I said, “So maybe there’s a movement,” and he said, “Well, I would start on your foot. Start on your foot, and that’s your move,” and that’s all he said.  And then we left and just thought about it, and that’s all we had. Something else emerged, and it’s both a turning point for the character, and it was a turning point for me and Todd working together.