The Jumeirah Emirates Towers in Dubai last week, welcomed a bevy of some of Indian cinema’s  most recognised names. Among them was Karan Johar, Sidharth Malhotra and Kriti Sanon. But bringing them all together under one roof was Manish Malhotra, a man whose career graph is tightly wound with the sartorial evolution of Bollywood over the past three decades. The three stars walked the ramp alongside a troupe of supermodels as the legendary designer showcased two of his latest collections — Sensual Affair and Tales of Indulgence — to some of Dubai’s most influen-tial names. And reflecting the drama captured in his garments — voluminous skirts, wispy capes and delicate saris encrusted with pearls, tassels and feathers — was the set, which saw models descending on an escalator before making their way down the ramp.

Quite fitting, really, for someone whose career started as a result of his love for film. Not just designer to the stars but also a fixture in many of India’s high-ranking celebrities’ inner circle, the couturier has admitted on many an occasion that it was his obsession for cinema that saw him kickstarting his illustrious career as a costume designer with a Hindi movie, roughly 27 years ago. 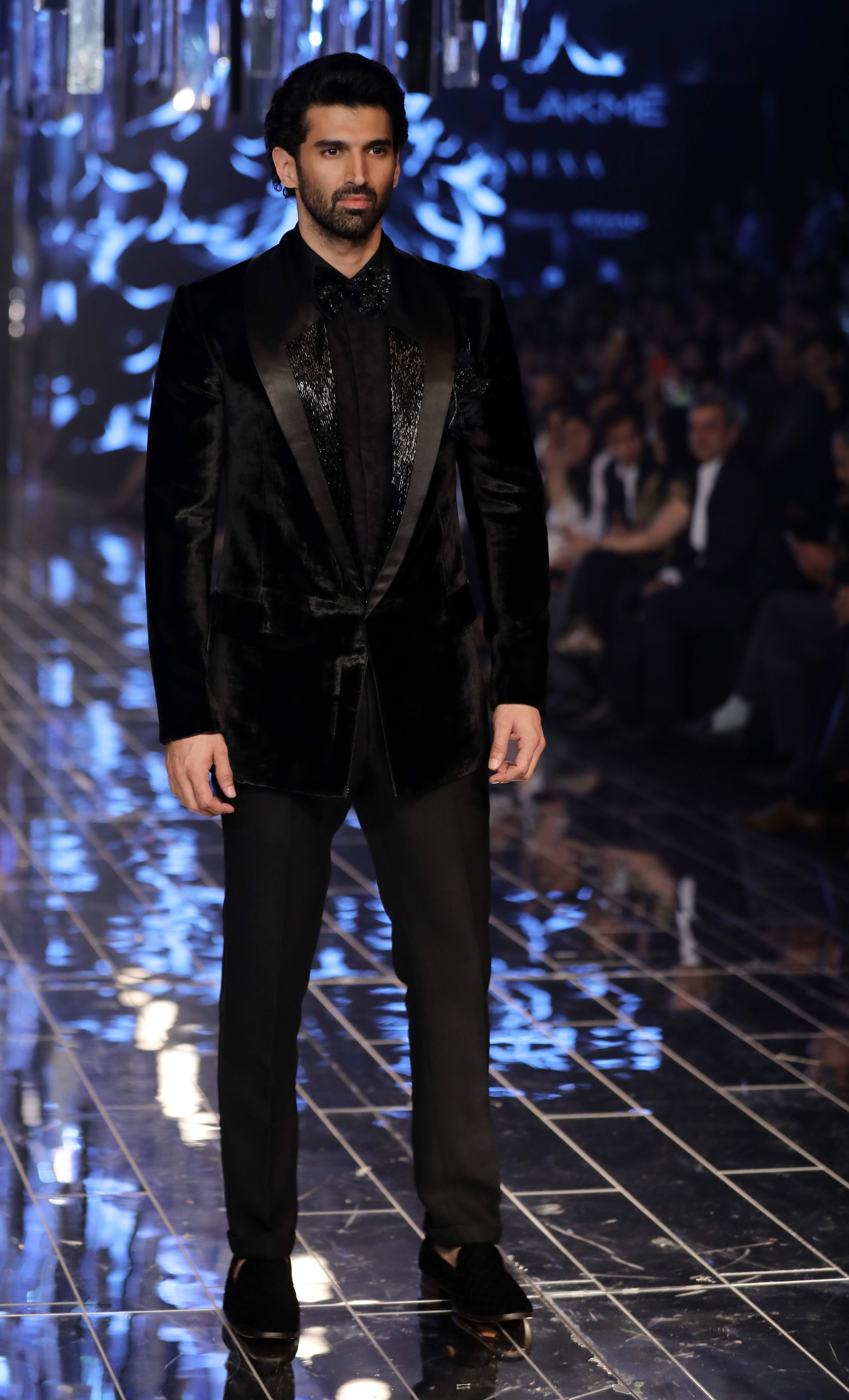 The film in question was Swarg, starring Juhi Chawla, back in 1990. “I didn’t want to be just a costume designer. I would ask directors for scripts so I could envision the characters and design accordingly,” Manish, who started off his career as a model, was quoted as saying. Having launched his couture label 12 years ago, the designer also recently revealed his interest in introducing an affordable pret label,
a home linen range and make-up that will embody the essence of Manish Malhotra, the man and the brand. While not designing for films or dreaming up the most elaborate outfits for Bollywood
royalty, he is also involved in quite a few noteworthy causes such as recognising and mentoring young talent through the International Woolmark Prize and creating employment opportunities for women by adopting the Kaifi Azmi Sewing and Embroidery Centre in Mijwan, Uttar Pradesh.

Manish, who most recently styled actor Jacqueline Fernandez in director David Dhawan’s (who incidentally was also the director of Swarg) most anticipated film, Judwaa 2, tells us more about his work and future projects in an exclusive interview — 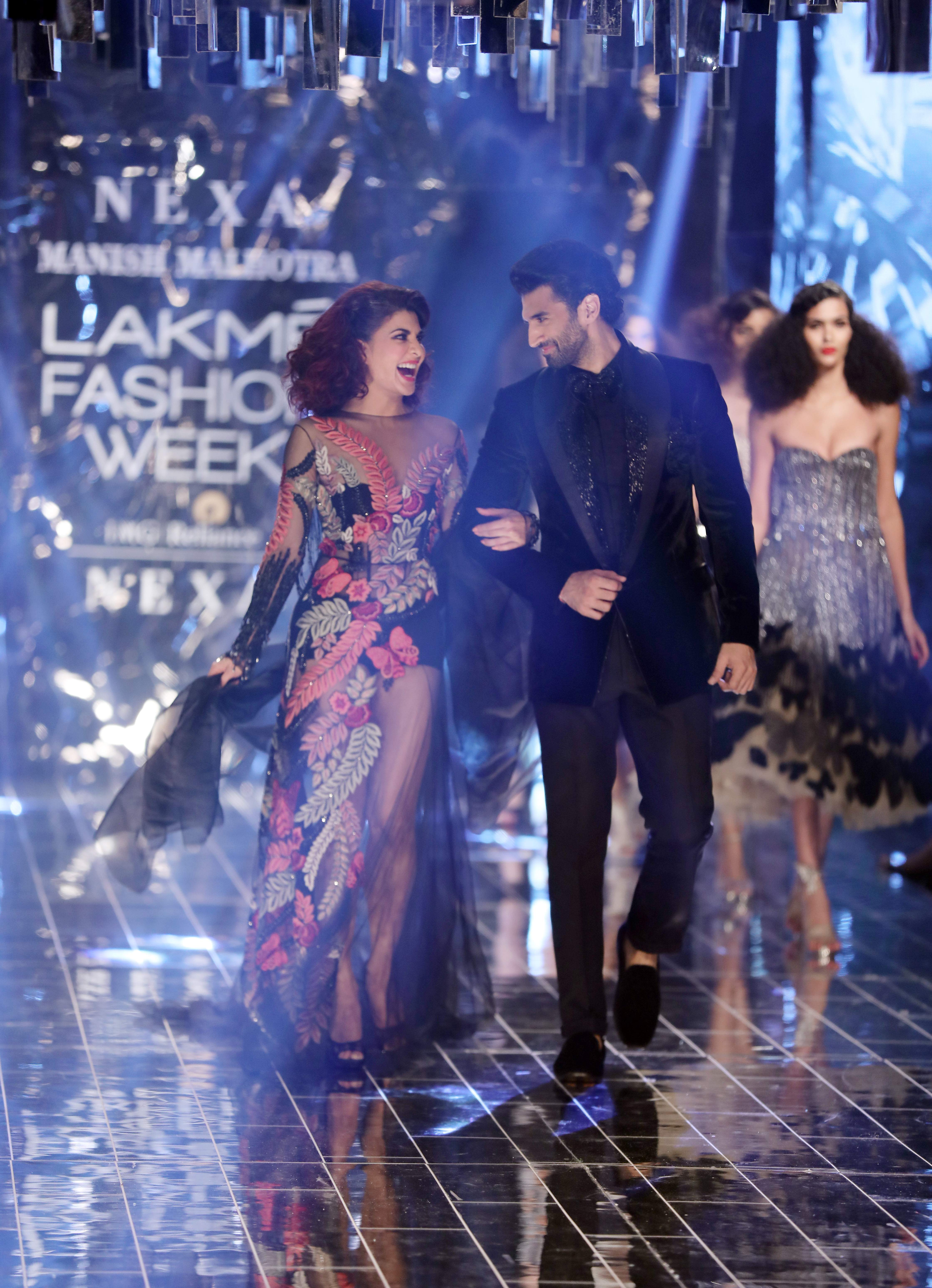 You’ve practically conquered everything that needs to be conquered in Indian fashion. What is your next step?
My next step involves working even harder towards my design stories and coming up with new collections that are innovative. I have multiple shows in the pipeline and I’m really looking forward to those. There’s also an exciting collaboration that will be launched by the end of the year. That said, 2017 has been an exciting chapter. I’ve been working closely with The Woolmark Company. This year, my Delhi flagship store completes four successful years and we’re expanding the store to 15,000 sq ft, making it the largest designer store in India.

Tell us about your association with Woolmark.
There is tremendous respect in the fashion industry for The Woolmark Company and the fact that they support designers by giving them an international platform like the Interna-tional Woolmark Prize to showcase their work.Moreover, it is an honour to be a part of the panel and share the space with such notable names from the fashion industry. It is also so interesting to see fresh talent and their merino wool innovations during the International Woolmark Prize.

What are the challenges of working with wool?
Well, I’ve had a very pleasant experience working with wool. I realised that one can work beautifully with this fabric and create both Indian and modern looks amazingly. Looks that can be worn for festive occasions and weddings in winter. This versatile fibre can also be worn during the summer by using the right wool blends. Merino wool’s story in India is getting stronger by the day and there lies a lot of potential for fabric development.

What according to you is good design?
Good design is original, innovative, something that evokes a new thought and yet is timeless.

Tell us about Sensual Affair.
Sensual Affair draws inspiration from women who are not afraid to express and embrace their sensuality. The collection showcases a marked departure from the traditional approach to bridal couture and presents an exquisite range that can be worn across numerous scenarios from weddings to glitzy events. Narrating a new design language through silhouettes that accentuate the curves of a woman’s body, the collection embodies a modern vision of feminism in urban India, and pays homage to the fearless, bold women breaking barriers across the globe and letting go of their inhibitions. 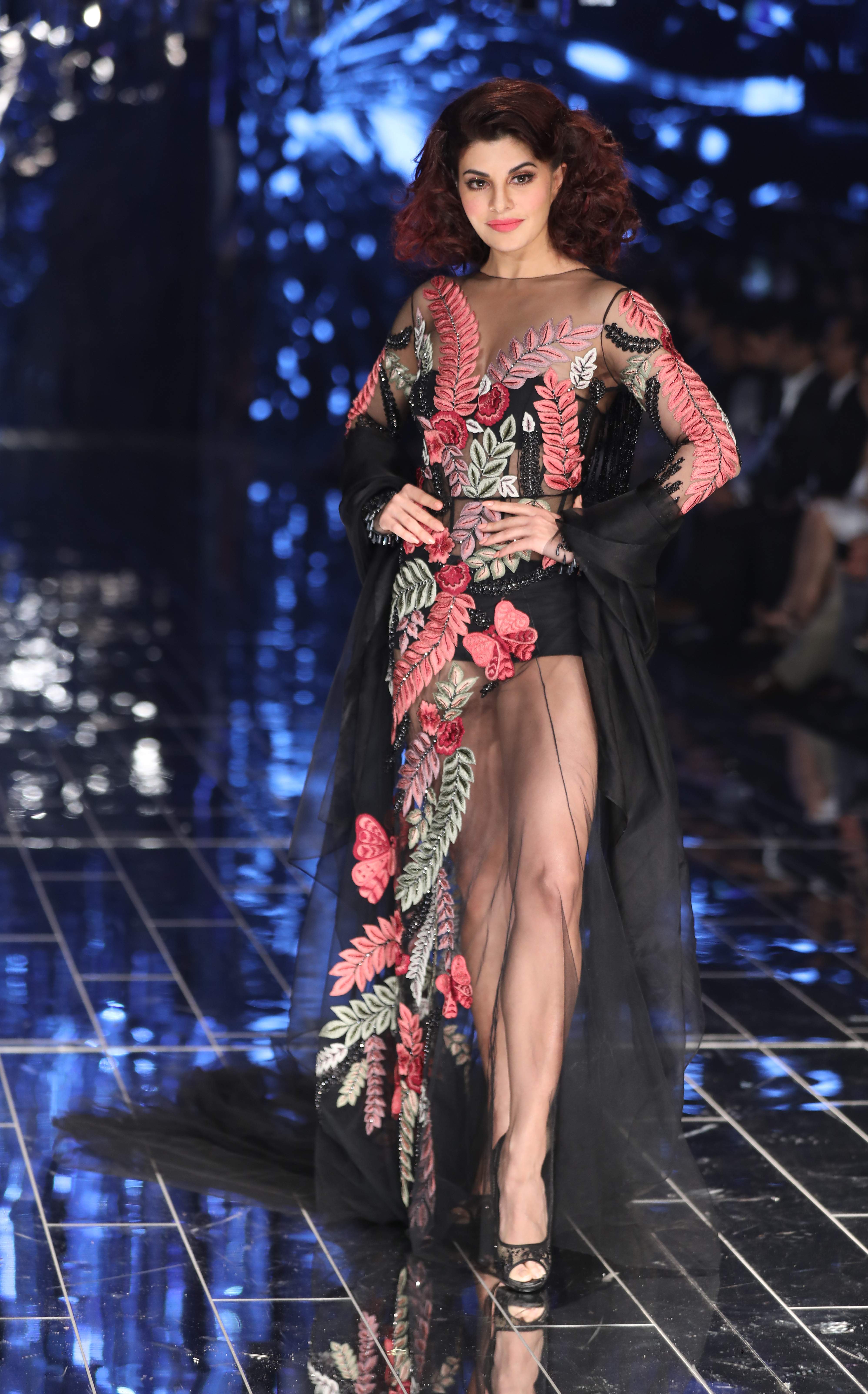 Which look is the most elaborate?
Well, the entire collection is elaborate. The collection weaves together the subtle nuances of modern artistry with the intricacy of true couture. Opulent skirts with embroidery art, fitted corsets and shimmering cascades. With three-dimensional embellishments, layered motifs and elaborate juxtaposition of texture, the label has astutely traded formal couture with flowing silhouettes and infinite skirt trails. The collection is a selection of 85 exquisite outfits.

What do you think will be the biggest bridal trends this year?
This season is all about opting for high fashion looks straight off the runway that showcase an intricate design story of feathers, sequins, tassels, fringes, off-shoulder and cold shoulder styles reminiscent of the fearless flapper trend of the 1920s. One can beautifully play with pastel hues of ivory, grey, beige, lilac, aqua and baby pink, which are breaking the monotony of traditional colours. For women, it will be cocktail dresses and flowing gowns with trains. For men, it will be fitted tuxedos, dinner jackets and bowties in colourful fabrics. 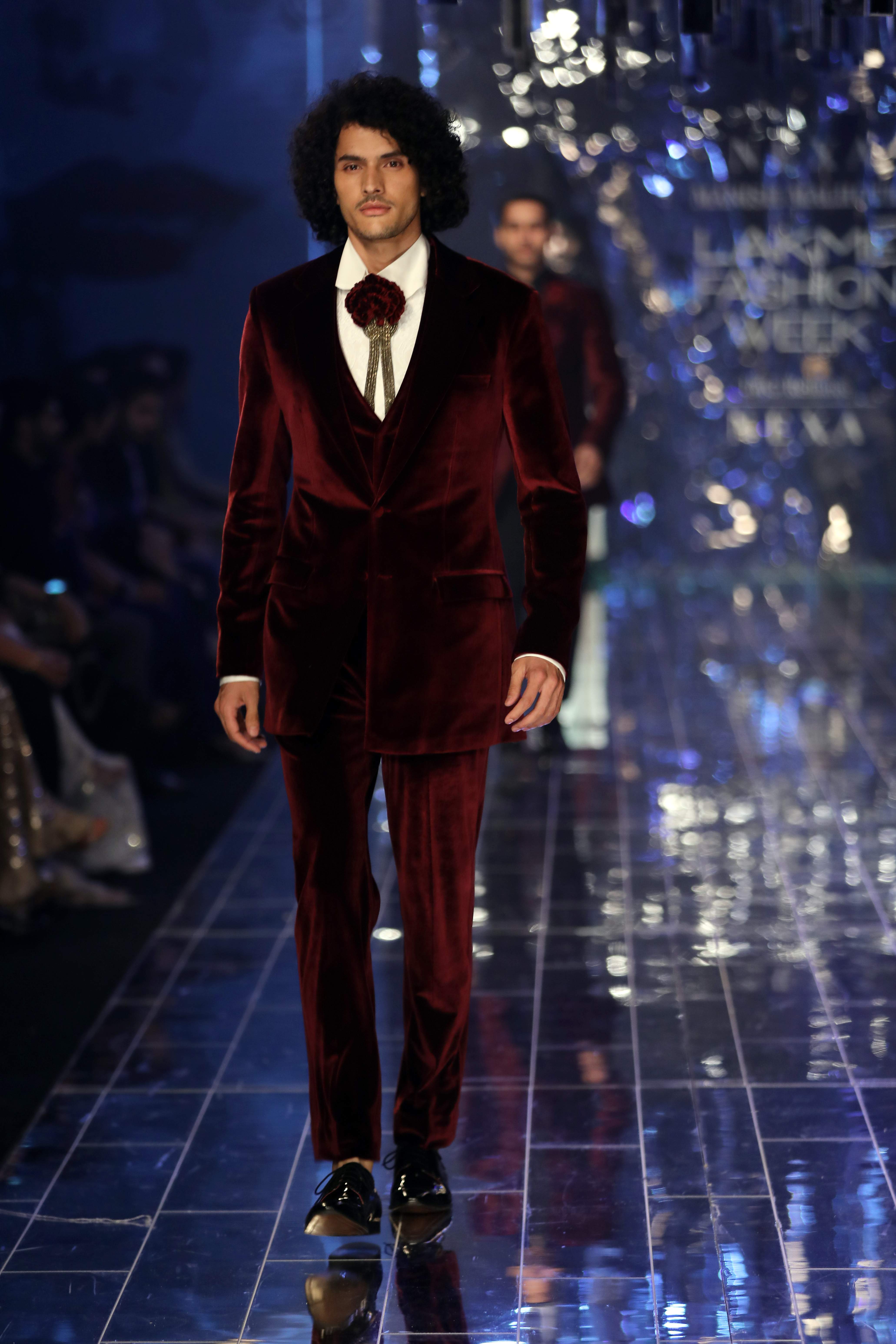 What do you keep in mind while designing for the modern bride?
With every collection, my aim is to showcase innovation in design. At heart, while all my designs spell Indian tradition, you will see them being presented in a modern avatar to appeal to the contemporary man and woman. The idea for me is always simple – be it whatever silhouette or karigari – it has to have the signature Manish Malhotra touch with a hint of glamour. And it’s a conscious effort at my end to make this shift as the Indian fashion industry is no longer limited to India – we’re on par with global fashion and we’re looked at for the design stories we bring to the runway.

What is a fabric or technique you love returning to?
I’ve worked with so many fabrics and techniques that it’s difficult to pick one. But, the one thing that I constantly work towards is bringing various craft communities to the forefront. Which is why, you will see that I have worked so often with various techniques available all over India. 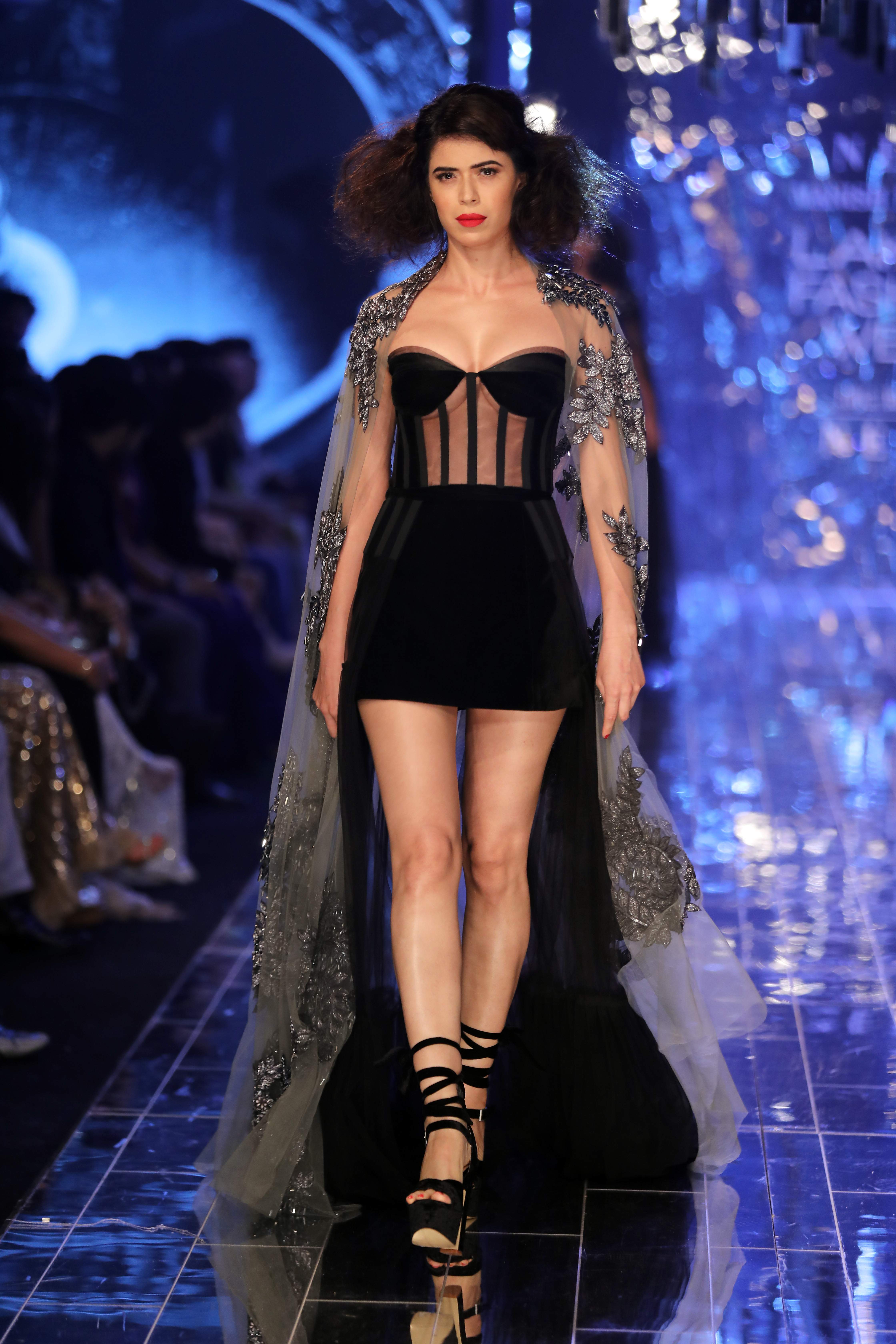 Tell us about your collection showcased at the recent Lakme Fashion Week.
My closing show at Lakme Fashion Week presented for the very first time bespoke suits for men. After a successful menswear show at LFW a few seasons ago, the new collection, Tales of Indulgence is a step forward through a renewed focus on the segment. With this collection, we’ve taken a step forward in terms of innovation and design by also introducing a bespoke tailoring service that will be available at our flagships store in Mumbai and New Delhi.The collection for women has been given a modern twist, keeping it traditional and festive at the same time. Silhouettes like the stitched sari and cape kurtas in a colour palette including chrome, oyster grey and ivory lend a young, glamorous element to festive attire. For the first time, we have also used black extensively in the collection. The collection accentuates the sensuality of the female form by using straight lines, flowing fabrics and low cuts in its construction, which gives it a modern touch. Word of advice for aspiring designers.
My advice to the young designers is that today success is very easily obtainable through media hype, digital platforms and showstoppers. What is most important is sustainability and having constant focus to create innovative and creative designs. Lastly, it is also very important to be grounded and not take anything in life for granted.