She's the comeback queen of 2018! We shake a leg with Preity Zinta on her return to Bollywood

THE ERA is the 1990s. Psychotic criminal Lajja Shankar — known to have murdered several innocent children in the past — is on the prowl. CBI greenhorn Reet Oberoi is sent in to assist the local police, and she arrives with all the nervousness and self-doubt of a beginner tasked with something beyond her might. Case file in hand, she walks down the corridor of a dim-lit prison: looking not for the deranged serial killer, but another criminal expected to help her on his trail. Suddenly, haunting bursts of a melancholic song reach out to her, warning her to turn away and never come back, but Reet strides on — shaken but resolute, panicky yet brave, her face streaked with shadowy prison bars and her chin unyieldingly up.

In Tanuja Chandra’s cult crime-thriller Sangharsh (1999), Preity Zinta played this foregoing dauntless heroine. The film, remade from the Hollywood classic The Silence of the Lambs, may not have aged very well (with Akshay Kumar’s centre-partitioned man locks reducing Hannibal Lecter to a brooding indie-pop heartthrob). But the same cannot be said of its female lead. At 43, Preity Zinta — actor, entrepreneur, philanthropist and now actor again — remains unceasingly bubbly and full of spunk. “I am an army kid — my father was an officer, my brother too is in the army. So I guess being courageous comes naturally to me. I think it’s important to be true to oneself. How you perceive yourself is more important than how people perceive you,” she says.

After a five-year break from the movies, Preity recently made her comeback in Neerraj Pathak’s Bhaiaji Superhit, playing a feisty North Indian housewife constantly insecure about her gangster husband. Although the film, released on November 23, witnessed a poor run at the box office, Preity stole praise for her performance. Going ahead, the actor seems eager to continue making films and explore new avenues in her career.  “I’ve mostly been offered modern, sophisticated or highly educated characters in my career. Hence, I was happy to do a full-on ‘pataakha’ (firecracker) role for my comeback,” she admits, adding, “As an actor, I want to keep experimenting with new and exciting roles in the future.”

She wasn’t really gone though. Ishkq in Paris (2013) — her last film before her hiatus, which she also produced and co-wrote — was followed by a cameo appearance in Raj & DK’s Happy Ending (2014). Then in February 2016, Preity was back in the news for marrying long-time partner and American financial analyst, Gene Goodenough, in a private ceremony in Los Angeles. The two had met in Santa Monica and dated for five years before deciding to settle down. A graduate of Marshall School of Business, Gene is Senior Vice President of Finance at Nline Energy, a US-based renewable energy company.

The year 2017 saw Preity make another cameo appearance, this time in Chakri Toleti’s 3D comedy film, Welcome To New York, in which she played herself.The immediate focus through those years, however, remained her Indian Premier League cricket team Kings XI Punjab, a business venture that consumed much of her time and even took a toll on her fitness. “I had put on weight during my IPL break, and wasn’t looking very great. My focus was on my work and not on myself. Every job has its own requirements — now that I am back in films, I had to work rigorously hard get back in shape. However, I also ate everything from ghee to parathas. If you are a foodie, you must exercise at least six days a week. That’s very important. You can eat as you please as long as you control your portions. If the size of your palm fits the food on your plate, that’s enough for one meal,” she advises. 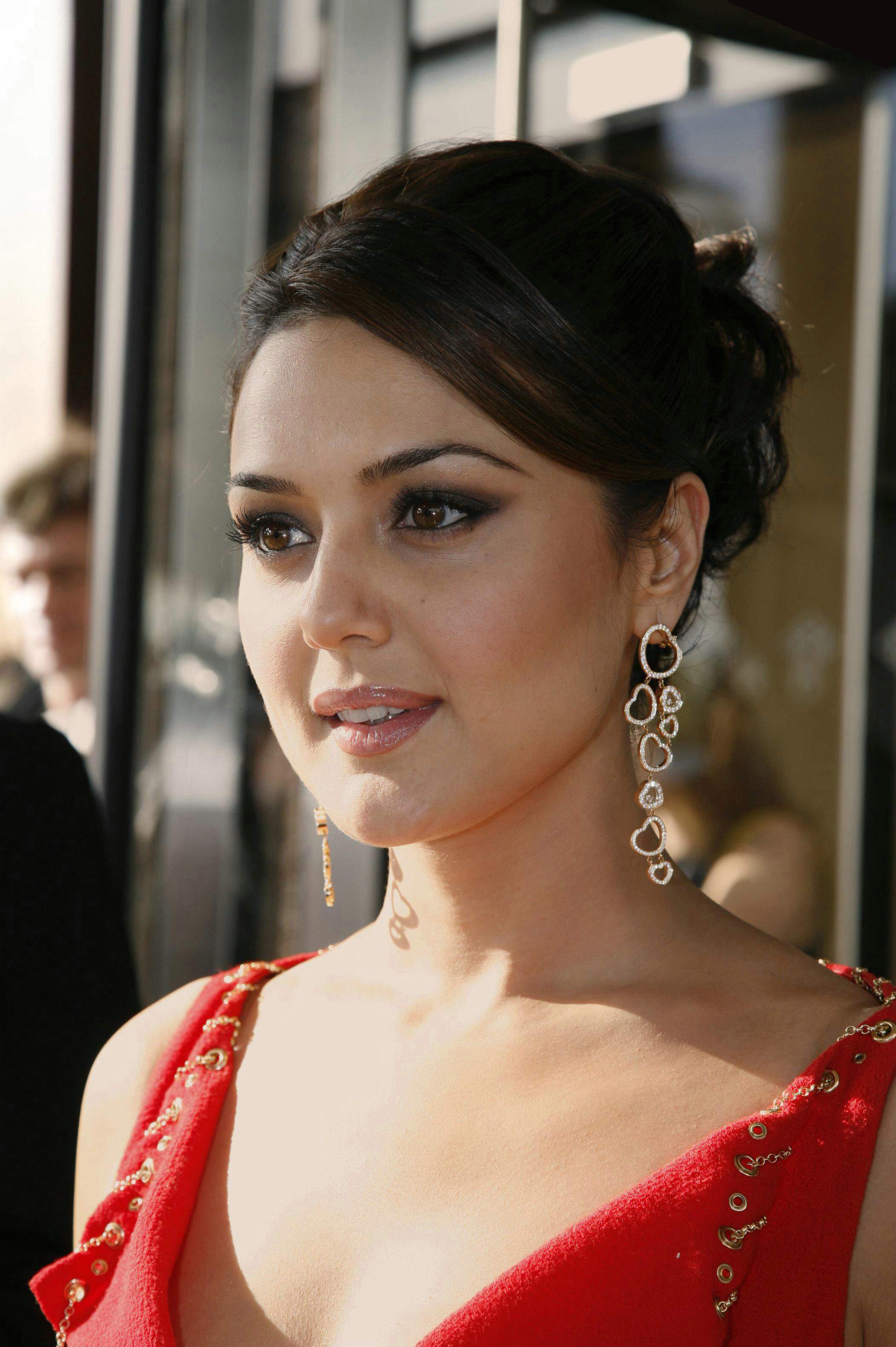 Many stages of an actor
Born into a family from Rohru, Himachal Pradesh, Preity made her acting debut in a supporting role in Mani Ratnam’s Dil Se.. (1998). The same year saw the release of Soldier — Abbas-Mustan’s cult classic action-thriller that paired Preity opposite Bobby Deol, as well as Premante Idera, her debut Telugu film opposite Venkatesh. Her first breakout performance came with Kundan Shah’s Kya Kehna (2000), where she played a teenage single mother fending off societal pressure and judgement. This was followed by memorable appearances in Mission Kashmir, Dil Chahta Hai, Chori Chori Chupke Chupke and Kal Ho Naa Ho, for which she won her first and only Filmfare Award for Best Actress. More landmarks piled up — such as Koi… Mil Gaya, Lakshya, Veer-Zaara, Salaam-Namaste, Kabhi Alvida Naa Kehna and Krrish — but so did an urge to break her mould and explore the parallel space. This resulted in critically acclaimed roles in Rituparno Ghosh’s National Award-winning English-language film, The Last Lear, and Deepa Mehta’s Punjabi-Canadian venture, Heaven On Earth, which was released in India as Videsh. “I have never seen myself as an commercial actor. There are various stages in an actor’s life that come with their own needs. Right now, after doing 37 films, I want roles that have no hint of Preity Zinta in them.”

Hanging with the Deols
In the commercial arena though, nothing quite matches up to Preity’s onscreen pairing with Sunny Deol — an association best remembered for films like Farz, The Hero: Love Story of a Spy and Heroes. In Bhaiaji Superhit, the duo reunited after almost nine years and won hearts with their awkward and bittersweet chemistry. “As everyone knows, I am a close friend of Bobby. I’ve never had much of a personal equation with Sunny. He has always been my best friend’s elder brother. He’s also very shy and quiet. I think he’s the person I’ve spoken the least to in my career. He still speaks very little, even though his arm has gone from weighing 2.5 kg to 4.5 kg (laughs). His dancing skills too, are still the same,” she jokes, revealing that she is a big fan of the home-cooked lunch Sunny brings to set, especially the white makhan (butter) and sarson da saag. Having worked through the best and worst of more than two decades of Indian cinema, Preity is wary to label the present upheavals in Bollywood as entirely path-breaking. “People say that content-driven films and female-oriented films are finally getting made, but I feel they have been around since the days of Mother India. My first film, Kya Kehna, was also female-oriented,” Preity reasons, while noting that Hindi films have definitely taken a more patriotic turn in the last few years.

Stories of Indians in India
“According to me, what has really changed in Indian cinema is that there’s a lot more national pride in our stories. A lot of biopics are getting made on our national heroes, especially our sportsmen and sportswomen. There’s a lot of focus on individual states and what it means to be an Indian,” she says, crediting the audience for becoming more discerning with their choices.“You can’t fool audiences anymore. Earlier, my DVD seller would tell me that a producer has taken the disk of a certain English film — and that’s how I’ll find out I’m working in a remake next. Today, audiences are much more cinema-literate, which is great. They have limitless access to content on Netflix and Amazon. Cinema is literally shrinking in size and is available at our fingertips. And Indians want to see stories about themselves that are set in India — not stories about Indians living in foreign countries.”Asked if a biopic is on her wishlist, and Preity quips, “Biopics choose you, you don’t choose biopics. For me to play a historical character, I must really look like her. Raju Hirani went to Ranbir Kapoor with Sanju because he looks like Sanjay Dutt. The Dhoni biopic went to Sushant Singh Rajput because he looked like him. If I’d really fit the role of a great personality, I would definitely do it.” 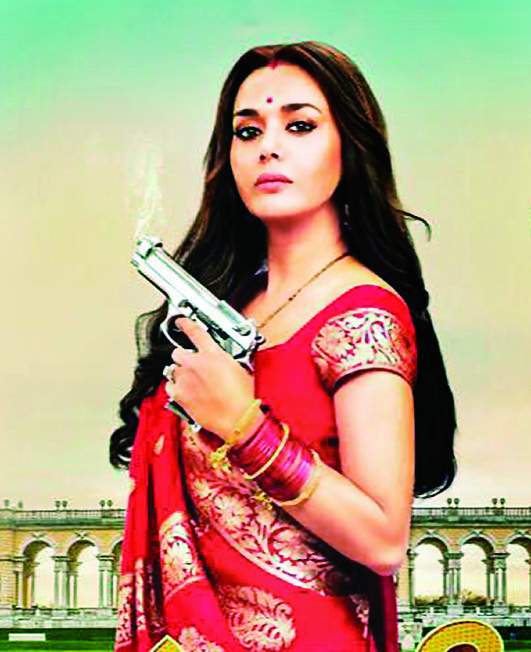 Meet Sapna Dubey...
The spark certainly remains. Preity Zinta might have been away from the big screen for five years, but her comeback role in Neerraj Pathak’s Bhaiaji Superhit burst forth with the same enthusiasm and chirpiness that once endeared her to fans. Preity garnered accolades for her refreshing cadences and quirky quips as the irresistible Sapna Dubey. Reassuringly, she perceived the outing as a genuine extension of her acting oeuvre. The role not only afforded her enough elbow room to experiment, but also fulfilled her long-held desire to play an unabashedly desi character. To look the part of an earthy UP housewife, Preity stuffed her wardrobe with Banarasi handloom saris — which she rues is a dying art — and also wore sindoor on her forehead. “I never knew applying sindoor would be so difficult. It would vanish on its own between shots, pulled down by the heat and sweat. We also tried a liquid sindoor, which gave me a big rash on my head.” The most difficult part though, Preity agrees, was getting her accent right. “I had to nail the Bhojpuri style of speaking. On top of that, my character is extremely fond of English and even though she is 12th fail — she thinks she speaks better English than the Queen of England. So incorporating all those variations were challenging. I had an excellent accent trainer on the film called Meenu ji who helped me a lot.”