Designers' cut: The hottest trends from the AIFW Autumn/Winter 2018 runways

Kitsch and whimsy, courtesy labels like Pero and Not So Serious, took on new and luxe forms at the Amazon India Fashion Week Autumn / Winter 2018, which concluded at Jawaharlal Nehru Stadium in New Delhi last week. While the vibe was easy, the work that went into their respective collections was anything but. On the other side of the spectrum, designers like Gaurav Jai Gupta of Akaaro and Abhishek Paatni of Nought One addressed social issues through their lines, while evening wear saw Gauri and Nainika and Siddartha Tytler infusing some drama into the mix with oversized sleeves and 3D flowers. Sports-inspired luxury too had a strong presence in the story of Nought One, among others. Our cover story this week, sees designers from Gauri Karan of Gauri & Nainika to Aneeth Arora of Pero weighing in on the trends arising out of the fashion week, in exclusive exchanges. 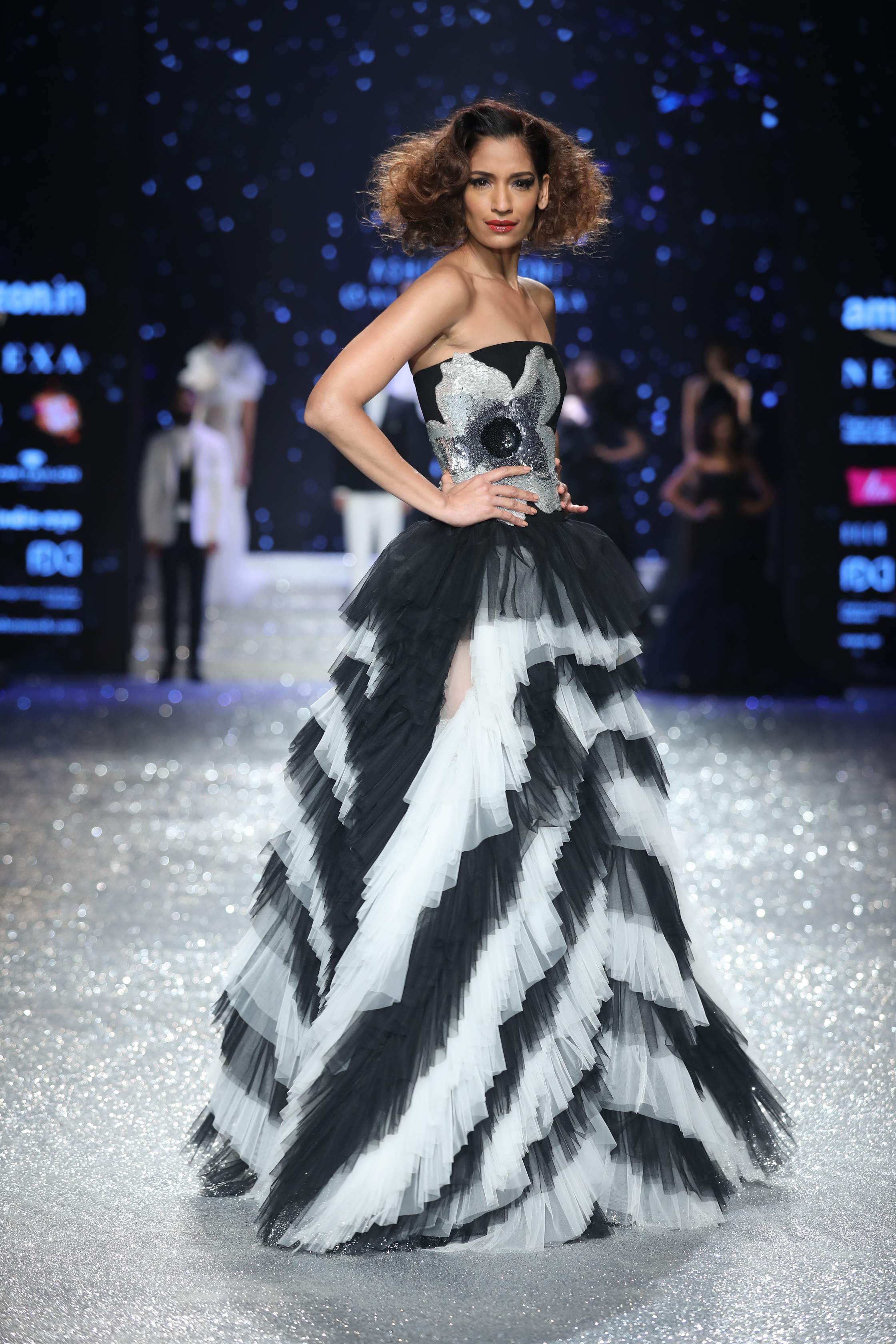 Monochrome craze
Ashish N Soni and Gauri & Nainika Karan made a strong case for monochrome in their joint show. While Ashish’s men’s-only line aimed to popularise ‘white tie’ dressing, the latter’s work celebrated ‘bold femininity.’ “Rather than using black and white separately, we mixed them up in the same piece,” says Ashish. Gauri adds, “Metallics and large exaggerated 3D flowers are also trends to expect.” 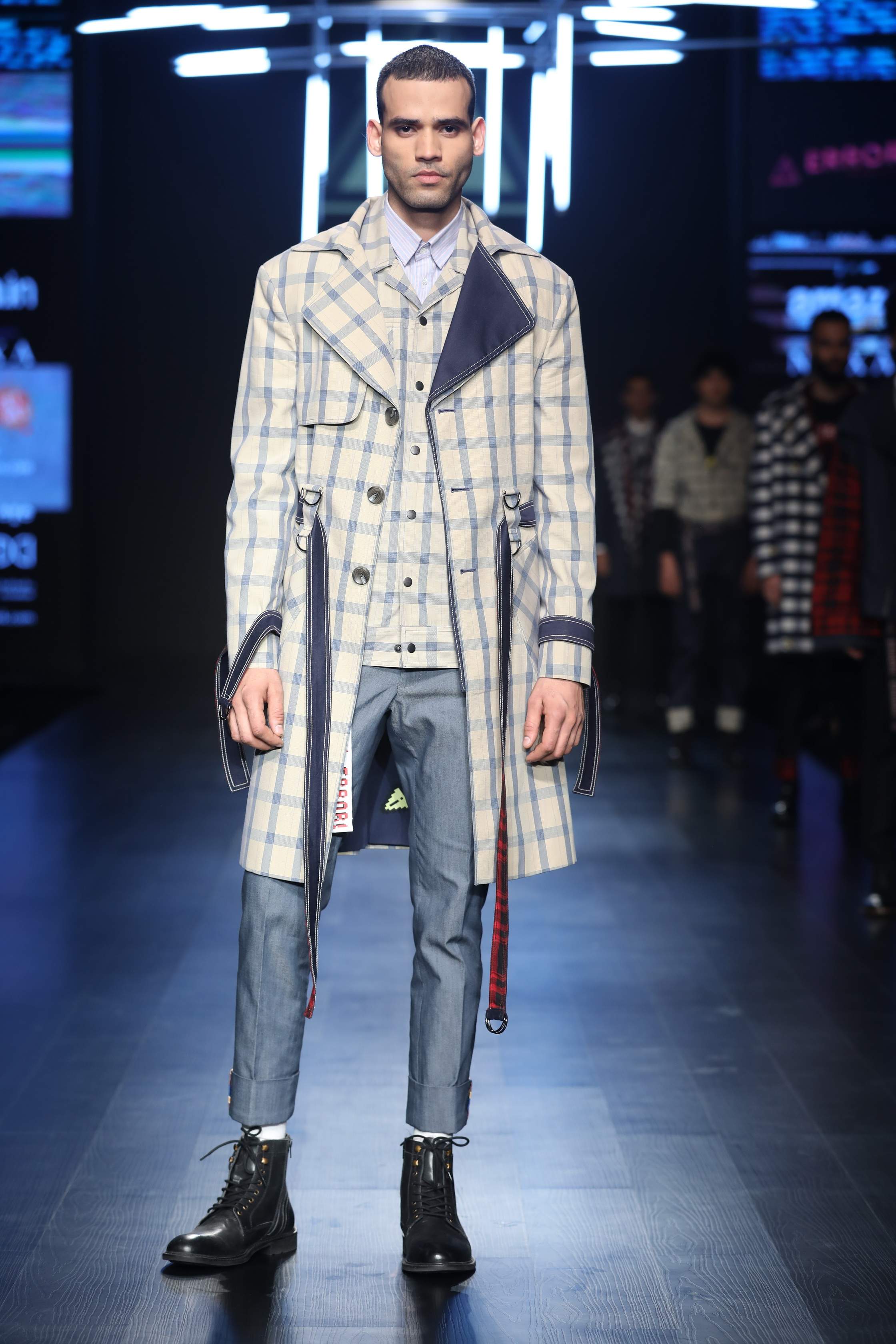 Check point
Titled Error,  Sahil Aneja’s collection is an ode to breaking from routine. He might have taken the ‘error’ motif (exclamation mark within a triangle) too literally with prints of the symbol on the garments, but he also gave checks a luxe treatment by using them on plush trench coats and jackets. Joining him was Delhi-based Dhruv Vaish, with classic British checks complemented by sporty accents, in a palette of chocolate brown, cream and olive green. 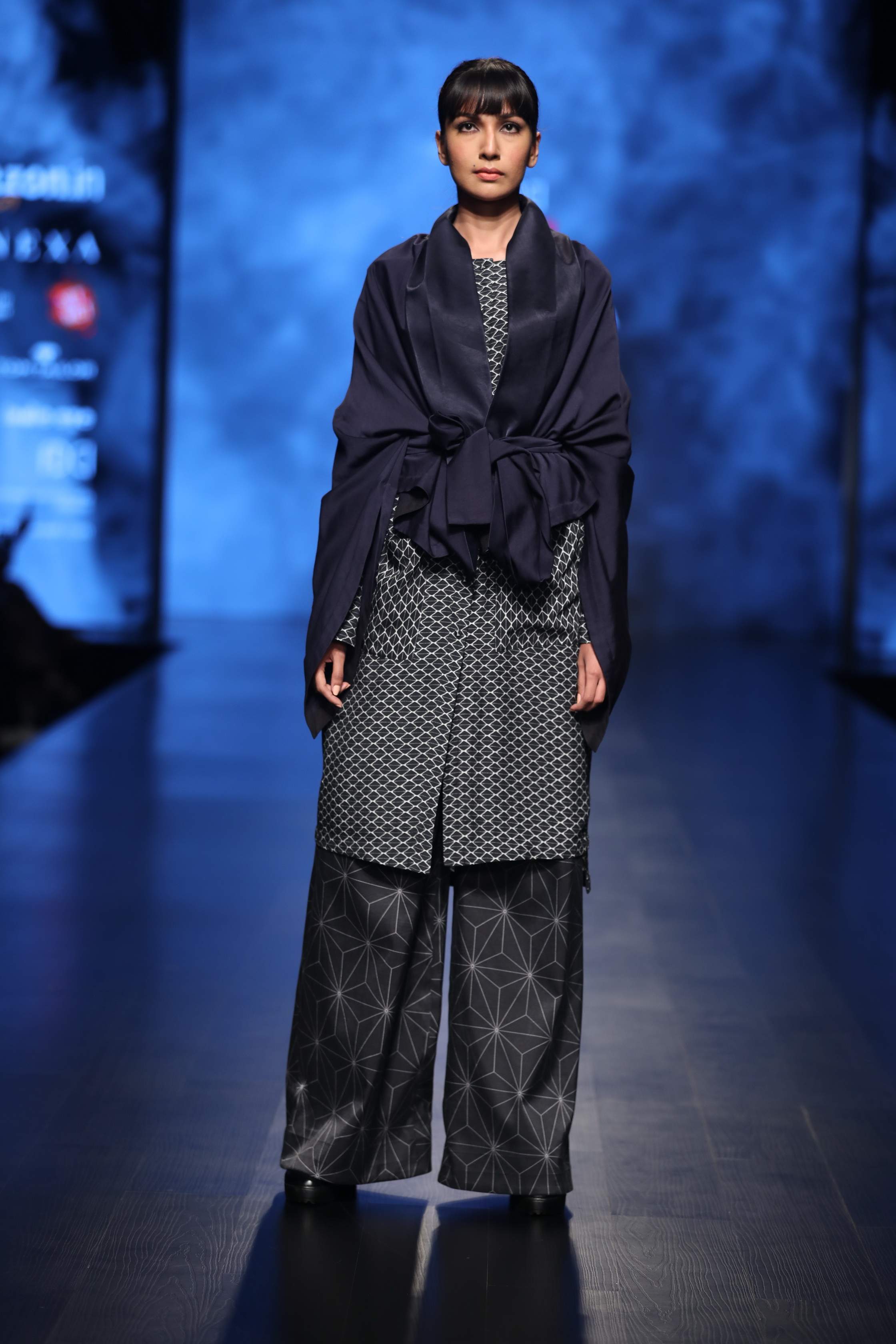 Kimono over
Akaaro’s Gaurav Jai Gupta has worked with Muga silk and wrinkled rapier cotton for his line The Upside Down, which is inspired by an alternate world, where we might be forced to go after successive natural disasters. Using a primarily monochromatic palette, the designer has also crafted some pieces in navy blue to break the monotony. Among them are draped kimono jackets that can be tied at the waist. The lightweight jackets are great for layering. 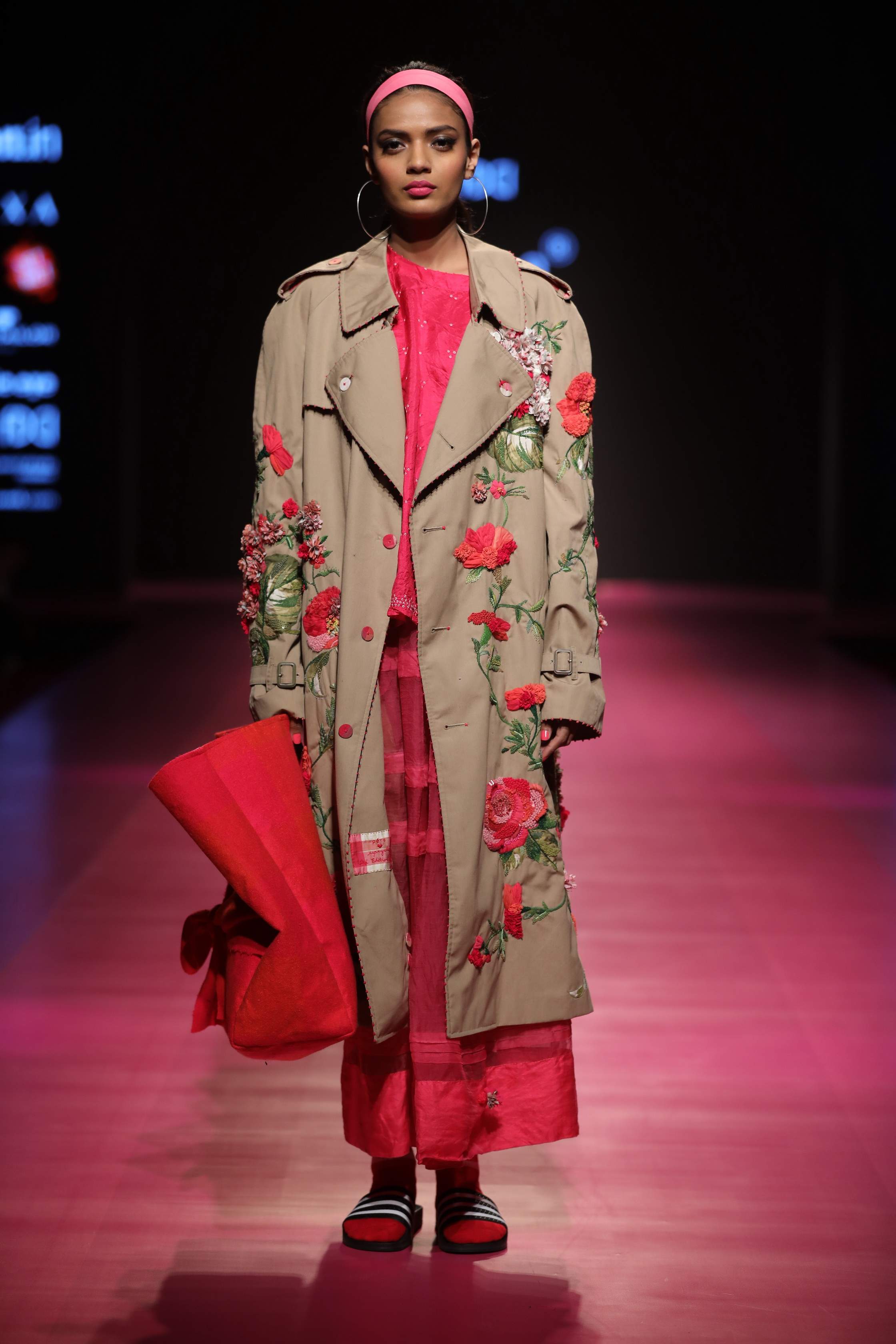 Pardon my trench
Eshaa Amiin and Pero by Aneeth Arora championed the trench coat. Eshaa crafted a solid navy blue number in a lightweight fabric, while Pero stuck to its whimsical sensibility, by pairing a classic khaki coat with embroidered botanical motifs in shades of pink and green. “The trench coat is definitely set to trend. I also think the colour pink, tartans and embroidered pullovers will be huge for Autumn / Winter,” says Aneeth. Sports luxe
Dressy sports-inspired looks are expected to take the fashion world by storm. Utility and sport came together in Nought One’s collection that references a post-apocalyptic world, where garments would be
made out of leftover natural and man-made fabrics. Jackets, kurtas, jumpsuits and trousers have been crafted from a mix of tweed, flannel, parachute material and nylon, and finished with heavy-duty tapes, rivets and D-rings. Sleeve story
Blending streetwear with a luxe vibe, Siddartha Tytler has used fabrics such as velvet and parachute to create puffy sleeves and draped collars. “We have incorporated a lot of exaggerated statement pieces teamed with structured elements. Interesting features like ostrich feathers, leather detailing and laser cut strips create a dramatic appeal. These elements add the right amount of drama, making each look chic and wearable,” explains Siddartha. 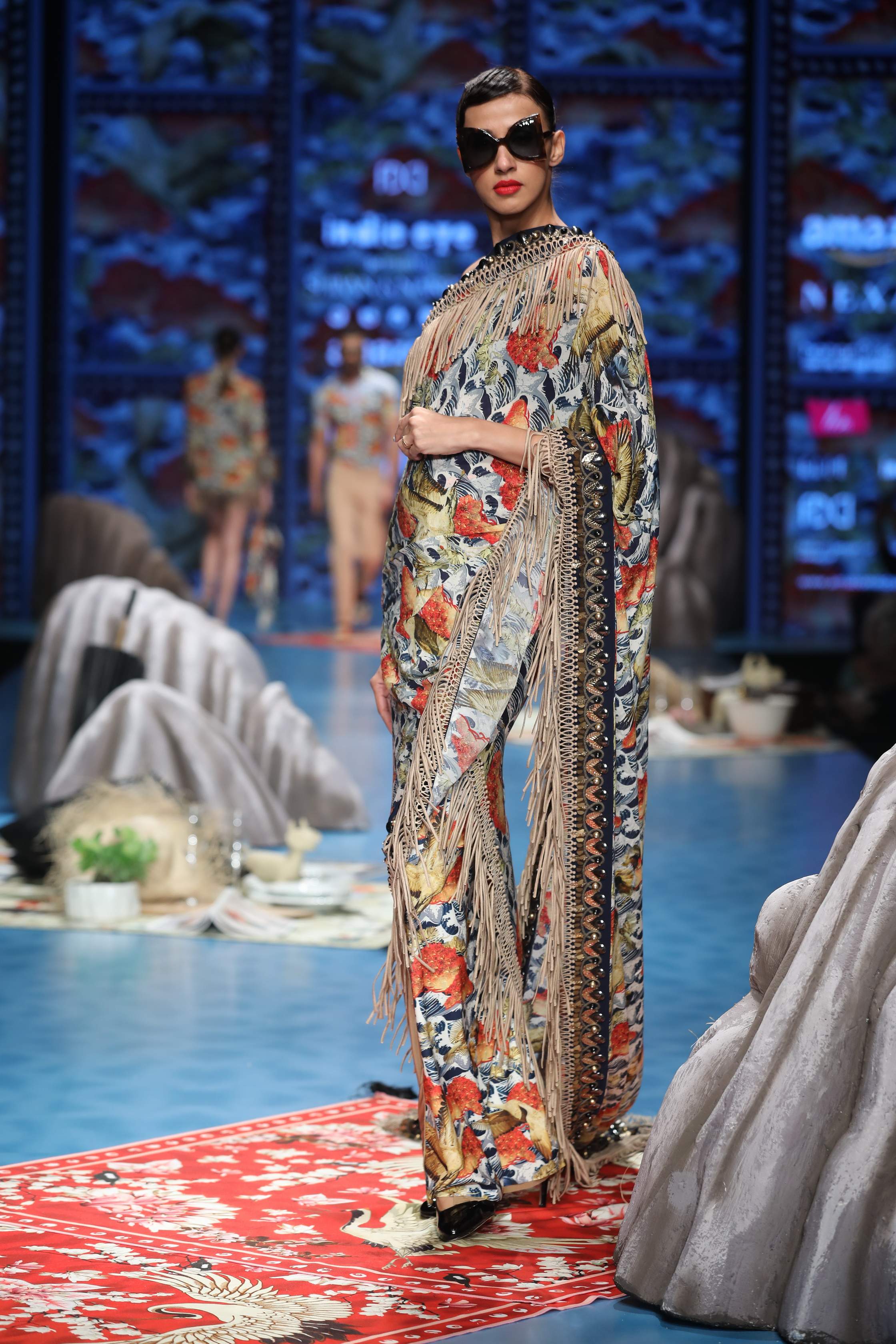 On the fringe
Marrying Edo art and botanical motifs reminiscent of Seychelles, Shivan and Narresh’s EdoMer series included bikinis, dresses and skirts in fluid fabrics. In addition to skeinwork, a continuation from their previous line, the Araki series, there was extensive use of tassels and fringes on saris, cover-ups and trousers. 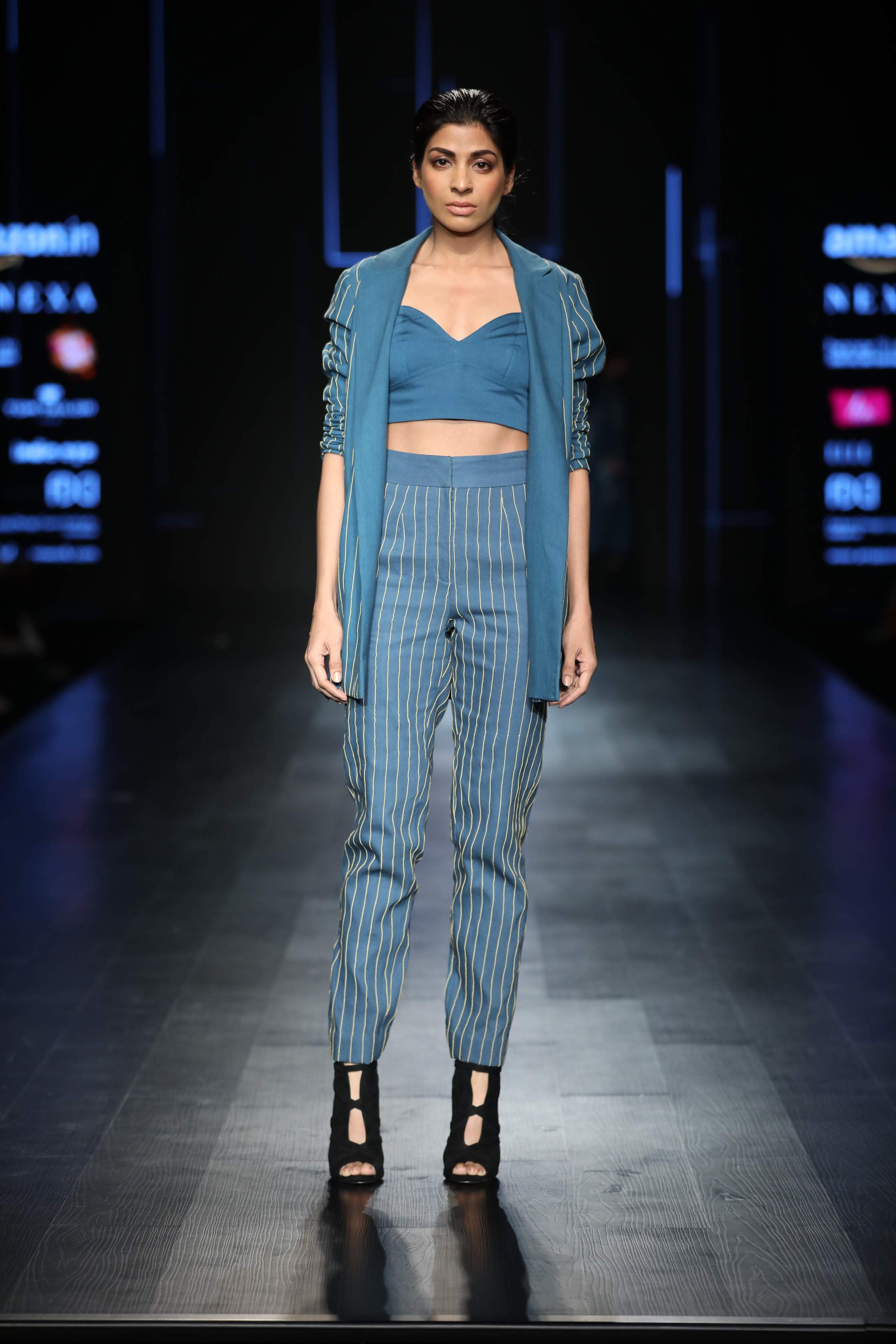 Khadi culture
Ilk by Vinita Adhikari and Shikha Goel presented a line of saris, long jackets, trousers and blouses crafted from khadi. “There are a lot of handmade textures, like pleats and chord detailing, to ensure it’s modern and relevant,” explains Vinita. Sabyasachi may not have showcased at AIFW, but his Spring / Summer 2018 line saw him favouring khadi with hand-painted designs, setting the tone for the coming months. 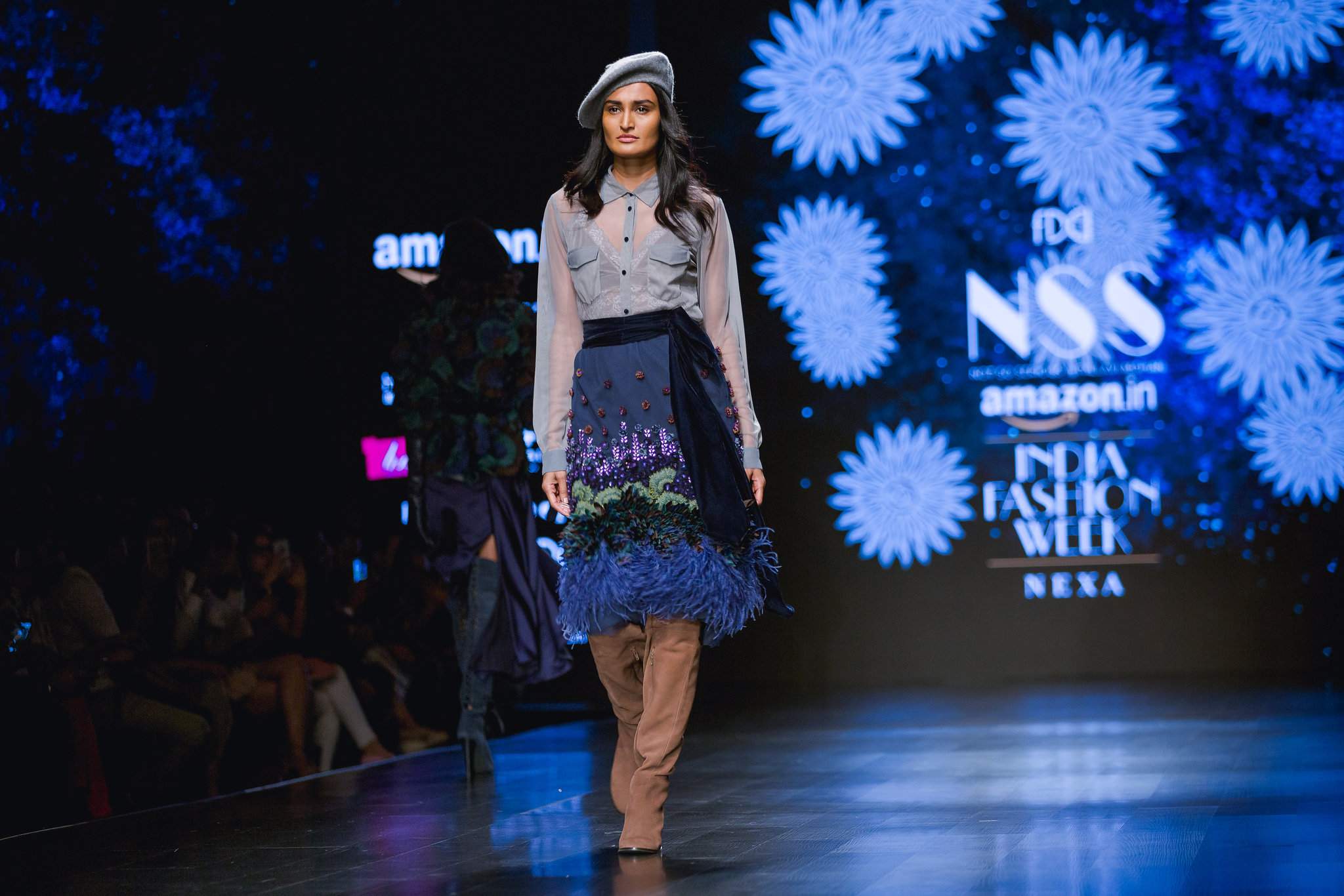 Take it easy
Not So Serious by Pallavi Mohan advocates easy silhouettes for the winter. Her collection, Winter Dahlia, reinforced Gauri Karan’s opinion on 3D becoming a rage, but Pallavi’s garments were a lot more slouchy and easy, for a laidback vibe. “I personally think, for AW’18, going easy on silhouettes and detailed on the surface and styling will be a major hit,” says Pallavi. Her garments, in a burst of teal, mustard and black, were peppered with leather accents, ostrich feathers, velvet and bows. Dark florals
Now by Namrata Joshipura takes inspiration from technology and how it has become our world, and not just a way to connect with the world. Heavy on sequins and embellishments, the designer sent a line-up of electric blue and magenta garments down the runway. However, what truly made an impact was a sheer, black off-shoulder gown with contrasting blue sequin flowers, promising florals for autumn, in a darker palette.

LAUNCH PAD
The fashion week saw a number of young names showcasing their collections. We look at the promising designers to watch out for: 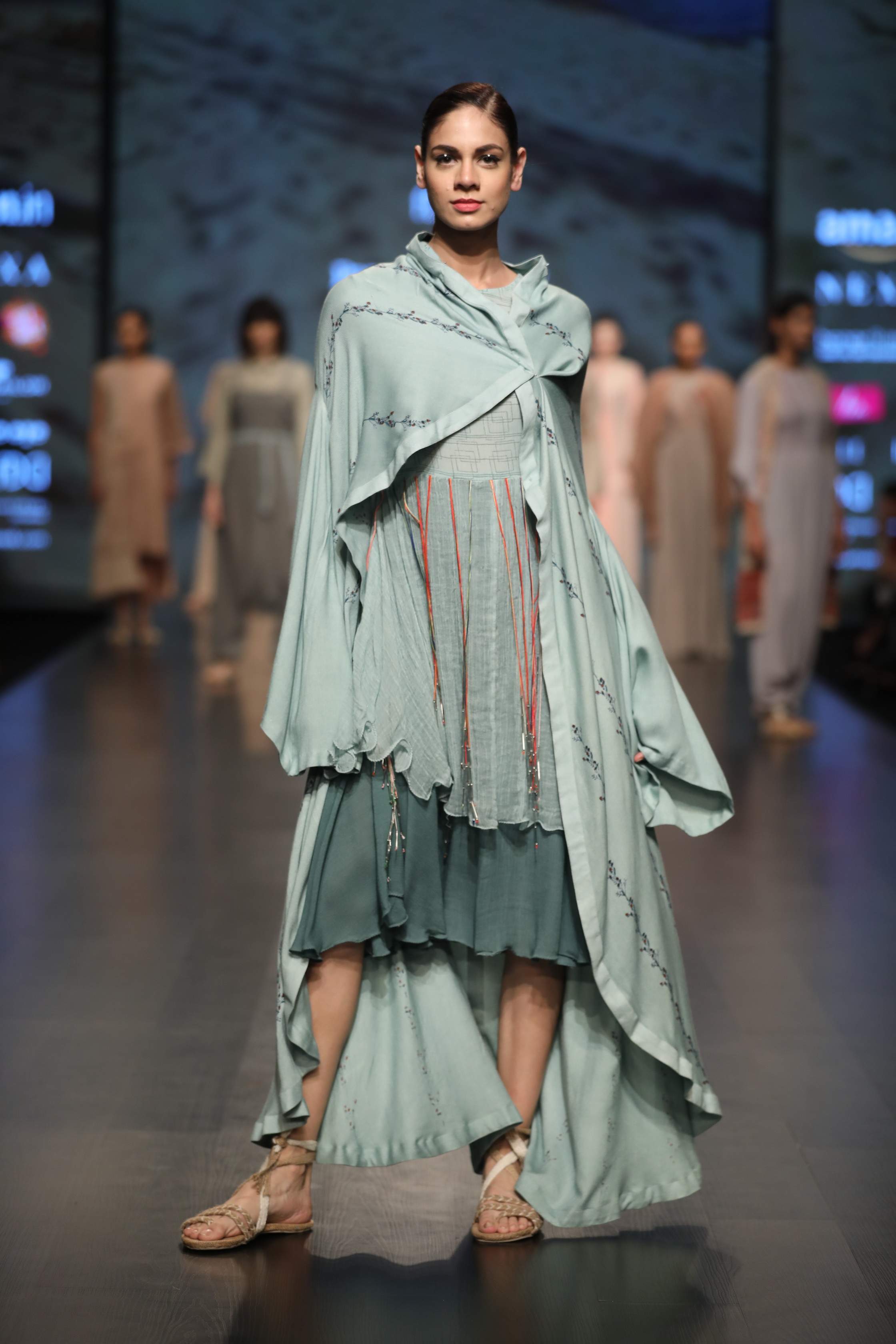 Priyam Narayan
Subscribing to the Japanese Wabi Sabi (beauty in imperfection) philosophy and celebrating the art of Kintsugi (fixing broken pottery with lacquer and powdered gold, silver or platinum), Priyam Narayan aims to bring together Indian folk art and Middle Eastern crafts. His collection for Autumn Winter
features flowing silhouettes, embroidered detailing, textural elements, gathers and tassels in a sombre palette of grey, charcoal and eggshell with pops of pale blue and mint. 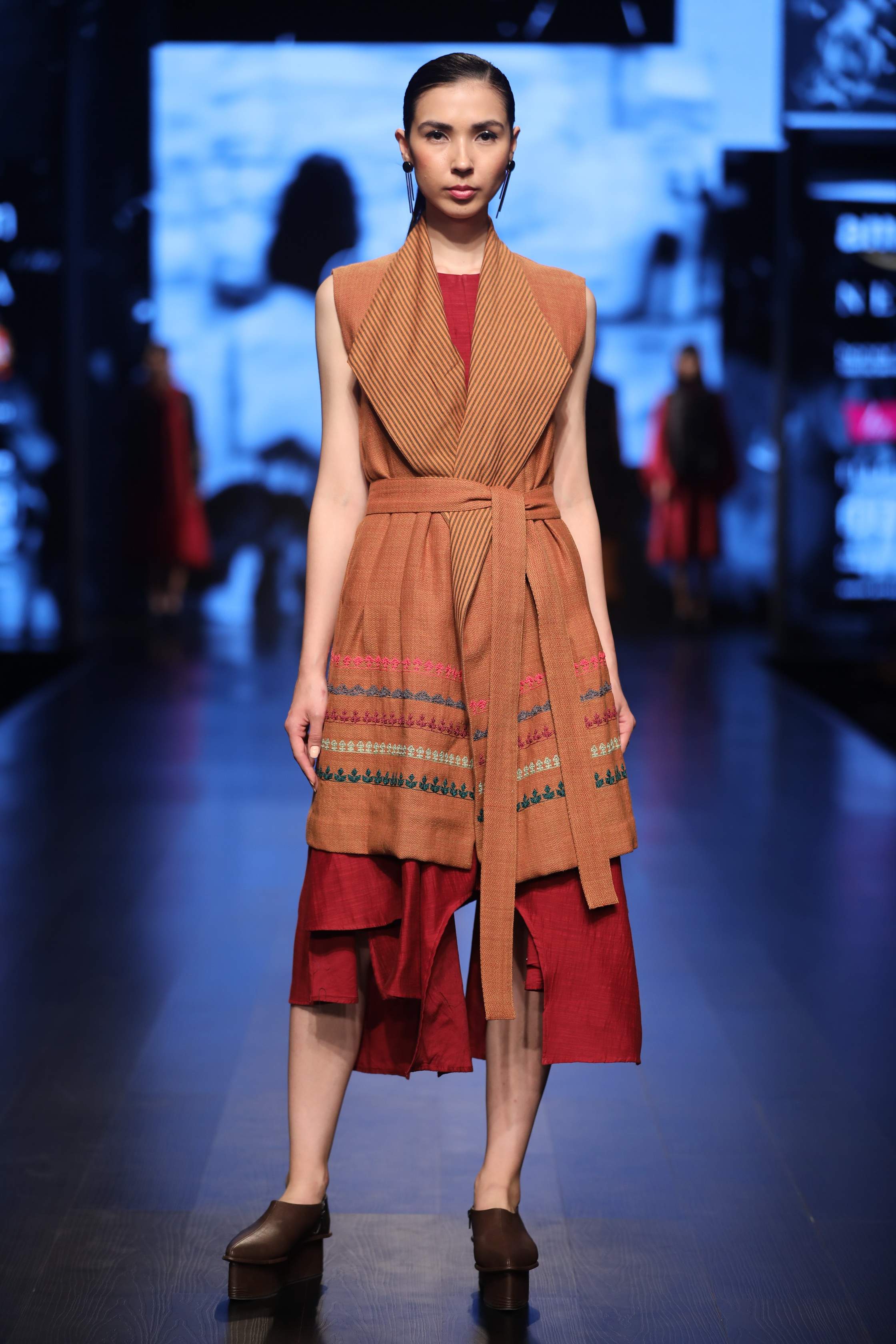 Aekatri by Charu Vij
Though founded in 2011, Aekatri made its runway debut at AIFW  last week. The brand creates feminine silhouettes from Indian textiles. Sanjha Phool, their AW ’18 collection, features easy dresses and oversized jackets in autumnal tones such as charcoal, rosewood and mustard, with thread-based embroidery on fabrics like Chanderi, cotton silk slub and wool.