Meghan Markle weds Prince Harry: The dress, the kiss, the guests and all you need to know

Prince Harry and American actress and activist Meghan Markle have finally taken their vows and exchanged rings. The wedding ceremony of the couple, who was officially titled the Duke and Duchess of Sussex, took place at St George’s Chapel at Windsor Castle in England.

While the ceremony was attended by around 600 guests, Hollywood stars including David Beckham, George Clooney, Oprah Winfrey, Gabriel Macht and Priyanka Chopra lead the guest list. Another 2,640 members of the public have been chosen to watch the ceremony from the grounds of Windsor Castle.

For her big day, Meghan wore a gown by Clare Waight Keller from the house of Givenchy couture while Prince Harry complimented her in a royal suite. Her wedding dress was a simple boat neck fit and flare gown which she styled with a long train with intricate embroidery on the border. She added glitter to her look with a tiara, which is an heirloom piece from the Royal treasure. The Prince of Wales stepped in for the father of the bride, as he walked Meghan down the aisle. She was followed by her six bridesmaids and four pageboys including Prince George and Princess Charlotte.

All the guests were seated while the choir of St George's Chapel sang If Ye Love Me, by Thomas Tallis.

The Most Rev Bishop Michael Curry, the first African-American presiding bishop gave an address titled the Power of Love at the service in St George's Chapel. After Reverend Curry's sermon, Karen Gibson and The Kingdom Choir sang, Stand by Me from the west end of the chapel.

SEE PICTURES: As Meghan Markle weds Prince Harry, here are some moments from the royal wedding

Harry chose to wear a wedding ring unlike his brother William and Meghan chose to omit 'obey the husband' from her wedding vow. Cellist Sheku Kanneh-Mason performed during the signing of the register, the part of the ceremony that completes the legal requirements for marriage.

Shortly, after being pronounced as husband and wife, the two shared their first kiss post marriage outside the Windsor Castle. The couple then delighted thousands of well-wishers as they travelled through Windsor in an open-topped carriage. 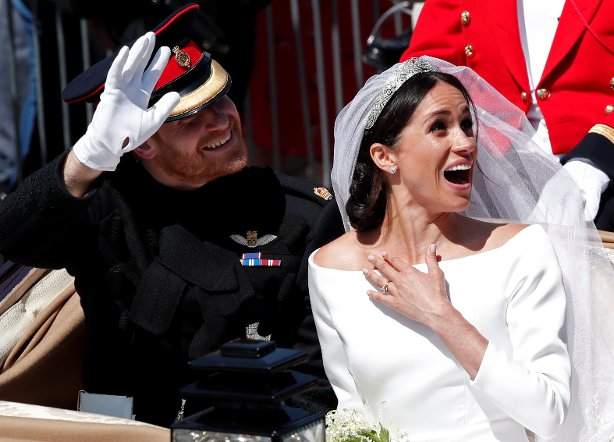 Later this evening, the couple will head to a smaller evening reception for over 200 friends and relatives hosted by Prince Charles, at Frogmore House, a country house south of Windsor Castle.