Realities are primarily moulded by the social and societal narratives that they present. So, when Carmen Jordá, the Spanish racing driver and member of the FIA’s (Fédération Internationale de l'Automobile) Women in Motorsport Commission, told reporters earlier in the year that women would do best to compete at the Formula E level, with lower G forces and cars with power steering, rather than in Formula One or Formula Two, the problem of gender once again presented itself. Did this skewed narrative have to do with a fact that the most visible women in racing were the sign-bearing grid girls who captured most of the attention in comparison to their racing counterparts?

It’s a man’s world
While the idea of promotional models has not quite cemented itself in the Indian market — with male racers from the country still striving to make an impact internationally— governing bodies of global motorsports have come to see the untapped potential that women possess. Gradually doing away with grid girls, the motorsports fraternity is now attempting to bring attention back to what matters — the racing. On an international scale, if women like Giovanna Amati, the last woman to have entered Formula 1, and Susie Wolff, the Team Principal of the Venturi Formula E team, have proven one thing beyond doubt, it is that women are willing to put the pedal to the metal just like the men. Why, then, does racing continue to remain a male-dominated sport? Could it be that women enthusiasts are often introduced into the sport by a male counterpart — a father, brother or even a co-worker, a scene quite similar even at home. Karting her course
Mira Erda, the first Indian woman to compete at one of the highest classes of Formula racing in the country, the Euro JK Championship, got her start when her father introduced her to karting when she was only eight. “Growing up watching cars at my father’s karting track got me interested in the sport.” Spending hours of training prior to her first race in Hyderabad when she was nine, the now 17-year-old notes with pride that the boys on track treat her as an equal. However, one does wonder, has being a woman in the industry affected her career trajectory? “Things are changing now. It was very different when I started out. At this point in my life, I think gender is just an excuse to maintain the status quo. The car knows no gender. Once your helmet is on, you’re a driver. It’s not about being male, it’s not about being female,” shares the Vadodara-born driver. 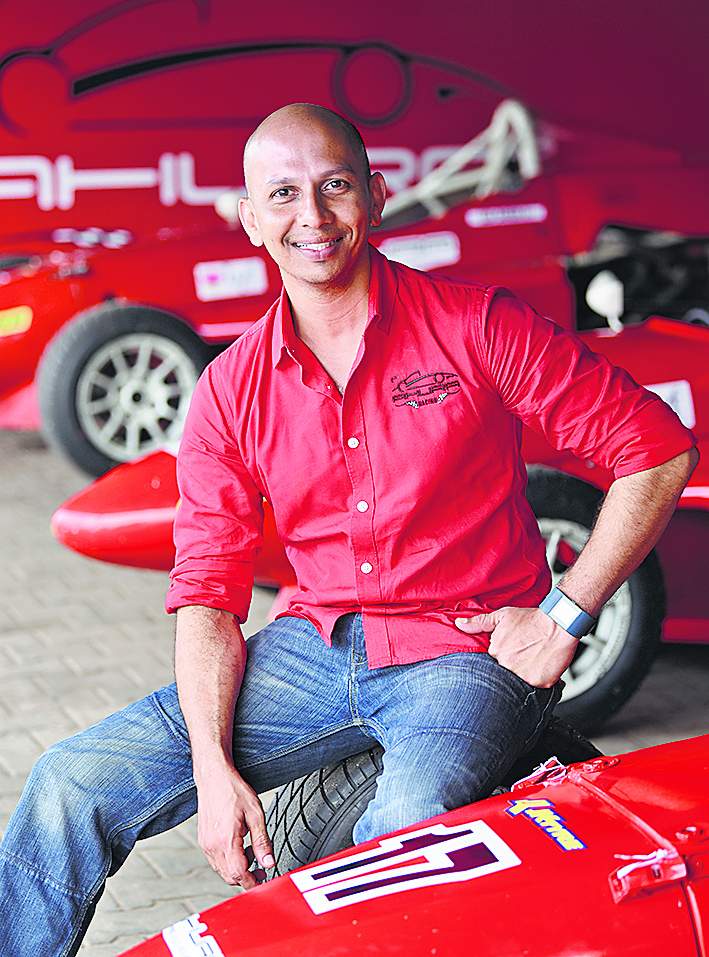 Do it like a lady
While other examples of such entries into the sport are the norm in the Gen Y roster, an exception to the rule comes from the Gen X in the form of former national champion Sarosh Hataria. Introduced into the sport by his Stock Car championship-winning mother in 1987, the 38-year-old recently took on Uma Hataria’s mantle, seeking out potential female talent and training them for the sport that offers no segregation. “There are women who get involved in motorsports, but very few make it to the podium. To make it to the top, you need to be on par with the boys,” says the Coimbatore-based racer. Ensuring that the women did not lack in opportunity, skill or technical knowledge, a foot in the door for a group
of amateur drivers came in the form of the three-time champion’s all-girl team, Ahura Racing. 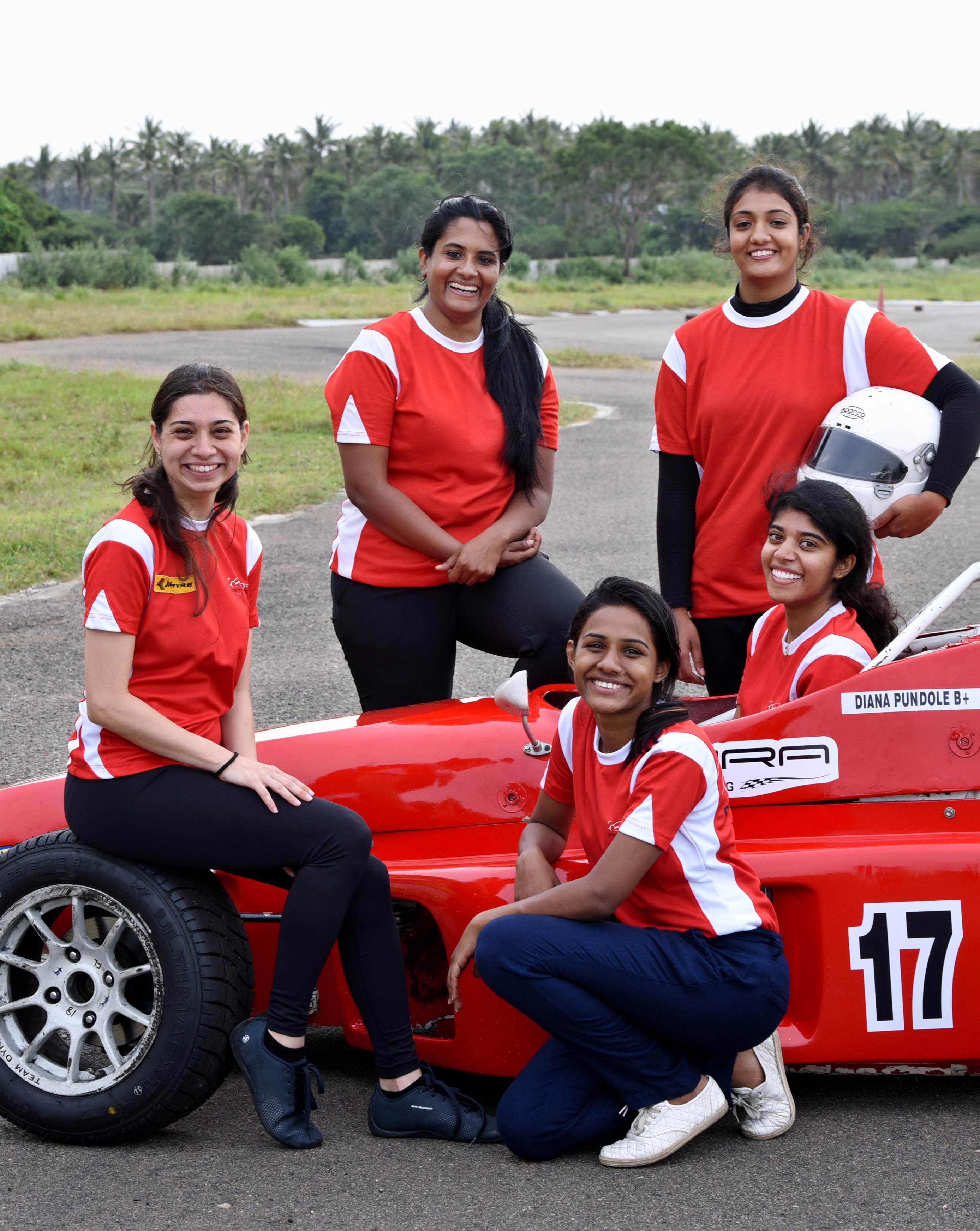 Give it to me straight
A first of its kind in the country, Ahura got off to a flying start following a nationwide hunt for the best female talent in the Formula LGB  circuit (open wheel class race cars), and hit top gear in their first race with six drivers and six reserve members. The team, however, drifted slightly off track with dropouts, putting their reserve in the front line at the recently concluded race in Coimbatore. One such member is Diana Pundole, who drove professionally for the first time at the age of 29. A pianist and artist by profession, Diana’s early memories involve sitting in the driver’s seat even as a toddler. “Later, when I grew up, I would take the car out just to see how fast I could go,” shares the racer, who is also a member of HOG (Harley Owners Group). While on the track, she may have proven her need for speed, coming in seventh with four other male racers trailing her gleaming red 1298cc Ahura Car, the racer admits that straight-line speed isn’t the only variable on the tarmac. Echoing her sentiment, Sarosh, the owner of the girls’ team, says with a smile, “Even a person driving a lorry can touch top speeds going down a straight stretch. Concepts of the racing line, braking points, racing and overtaking in a corner and oversteer are crucial to the sport.”

Tech-savvy by design
If there is one person who understands and agrees with the team principal’s analogy, it is Shivani Pruthvi. Daughter of former rally racer BS Pruthvi, the 20-year-old, who is a part of Ahura’s lineup for 2018, is also one of the two women racing at the VW Ameo-Cup this year. While her close proximity to motorsports initially spurred her interest, the Davangere-born racer tells us that it is the additional
guidance and technical support she found in sources like old race footage, and YouTube videos that have kept her constantly motivated. A third-year MBBS student from SDM Medical College, Shivani spends an entire week preparing, ahead of every race weekend. “I watch my previous races from the footage on my GoPro, to see where I can improve. I also keep track of podium finisher races to understand their driving style and racing line.” Usually at the track half an hour ahead of open time, the first 15 minutes of her race day are spent cleaning her car and talking to her mentors — a pre-race ritual. “You can end up psyching yourself out, unless you are mentally prepared for the race,” Shivani says with a laugh. Starting her second race for the Ameo Cup from pole, the 20-year-old shares that some of her key learnings about steering pressure, weight distribution under acceleration, and braking, have only come with her growing technical knowledge of the car. “When I started out, my understanding was as basic as — a car has four wheels and runs on fuel. Now, I know how to check the suspension when my car is ‘bottoming’ (when a car’s chassis hits the track surface). It’s a continuous learning process.” 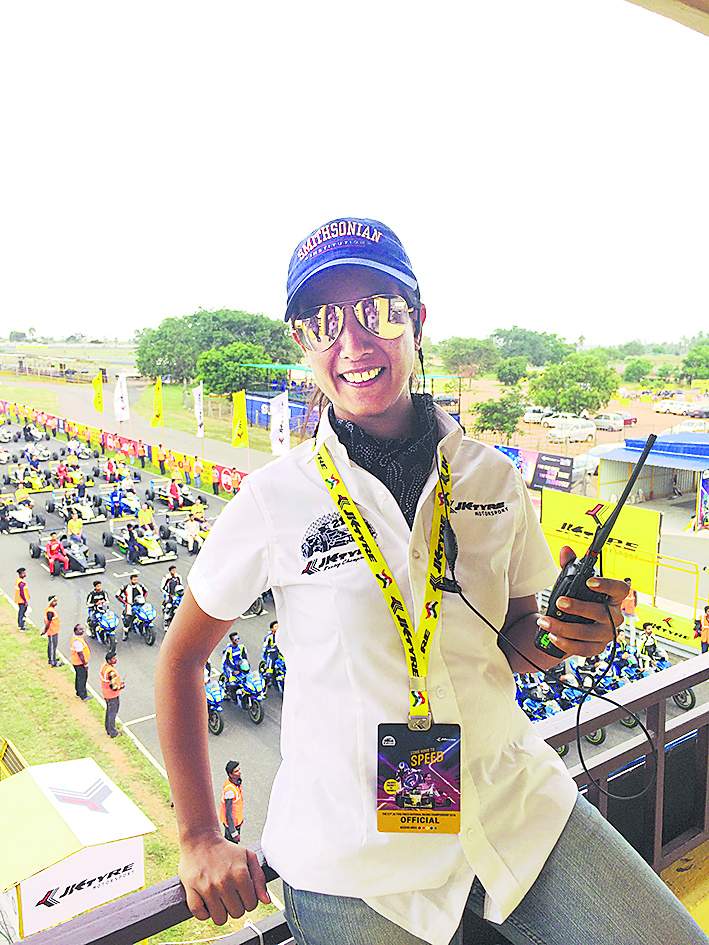 Towering above
While most often, only female drivers make headlines, there are women who work behind the scenes and deserve as much credit. Lying at the heart of all motorsports during a race weekend is the Race Control.Responsible for monitoring and supervising all stages of practice, qualifying and race season, here-in lies the fraternity’s latest addition this race season — Divya Miglani. A racer who
has taken on a greater off-track role, Divya has won many coveted titles and participated
in Raid-De-Himalaya in 2005, one of the toughest rallies in its class in the world. Currently a DCOC (Deputy Clerk of the Course) trained by the MSA (Motor Sports Association) in UK, the New Delhi-based racer is the only woman working for the FMSCI (Federation of Motor Sports Clubs of India) under the designation. “Besides making sure that everything is on schedule, it is the duty of Race Control to ensure everything is safe and legal,” says the 37-year-old. 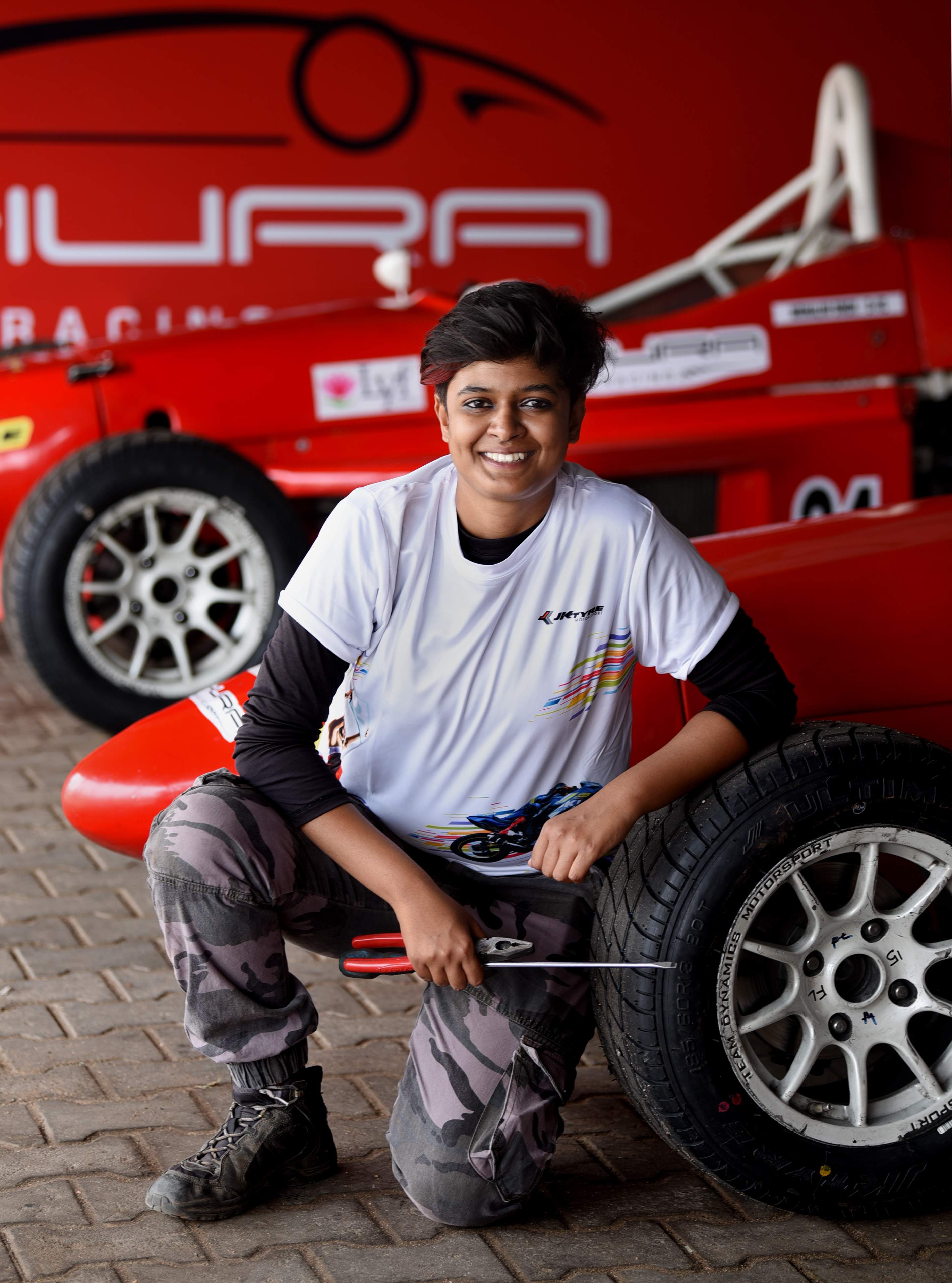 Where are the car girls?
In another first in this season’s calendar, a female tuner apprentice found her way into the pit lane at Round 2 of the JK Tyres Championship. A rare sight, by all accounts. Gopika Dharmshi strode into motorsports in 2016, taking part in the All-Women National Level Honda Ten10 Motorcycle Championship. “Though I had to take some time off from the sport because of an injury, I wanted to
actively participate in any way possible,” shares the 23-year-old from Bengaluru. An industrial and production engineering student, Gopika admits that while the job is hard, the notion that women don’t belong in the garage makes things worse. “I’m still learning the ropes, but sometimes, you get this feeling that you are overstepping into the man’s domain,” she confesses, revealing that she might head
back to racing in the following season.

Raring to go
With women gaining recognition across the spectrum of motorsports, especially in the racing segment, this generation is seeing an increase of role models in the cockpit. A professional pilot and perhaps one of the most committed drivers on track, Sneha Sharma earned the tag of India’s fastest woman racer in the Mercedes Young star driver programme in 2009. Registering 18 podium finishes in 35 races, the 28-year-old is drawn to speed and might continue racing in the LGB category for another year, or look at graduating to the Euro JK (Formula BMW).

Across the segment, in bike racing, 22-year-old Aishwarya Pissay is setting her counterparts on the edge. Winning four different championships in 2017, the women’s category of Raid De Himalaya, Dakshin Dare, Indian National Rally Championship (INRC) and TVS Apache Ladies One Make Championship, this Bengaluru-based biker was the first female racer to participate in a Baja World Rally event this year.

While getting more women interested in motorsports is probably the key, and perhaps the sports greatest obstacle when it comes to inclusivity, the single greatest truth about motorsports can be summed up in what Hari Singh,  Head of Operations of JK Tyres says: “The only thing that matters in a race is — are you willing to go all out, brake at the last second, and grab that millisecond edge? If you are, the helmet does not discriminate.”

The FMSCI created a Women in Motorsports Commission in 2017. Helming the council as the first female member, Sita Raina is part of a vanguard of women who are breaking new ground and taking on roles beyond the traditional figureheads.

It's A Number’s game

National Drag Champion, fastest lady driver in the National Autocross segment and second runner-up (navigator) in the Indian National Rally Championship, 27-year-old Priyamvada Saradhi is one of the only women to have participated in the various segments of Indian motorsports. Currently racing under the Ahura banner, the Bengaluru-based driver believes that accessibility to motorsports is not only dependent on gender, rather has to do with sponsorship. “Motorsports is perhaps the most expensive sport in the country. With teams like Ahura in the fray that  support women in the sport, the financial burden is also mitigated.”