The Girl in Room 105: Chetan Bhagat on his new novel and changing genres

Chetan Bhagat has had enough of romance. That’s is why his latest book, The Girl in Room 105 is an ‘unlove story,’ as specified in the tagline.

“I felt I had done enough love stories, and it is sometimes equally important in life to unlove and move on, as much as it is to fall in love,” says the bestselling author, who gave us the likes of Two States and One Night @the Call Centre, since he burst onto the scene, back in 2004.

Ironically, moving on is not just a part of the storyline, but also a reflection of Bhagat’s own life, as he recently switched from long-time publisher Rupa to Amazon-Westland. This new title is the first in his six-book contract with the publishing house. Moving on from romance, the Mumbai-based author is also trying his hand at a new genre for the first time — a thriller with a sense of humour.

Reinventing himself for the times, the author released a theatrical style trailer of his tenth book on YouTube earlier this month — one that is generating plenty of buzz on social media, and boosting pre-order sales, before it releases on October 9. The movie trailer
The two-minute movie-trailer book promo directed by Mohit Suri (who also directed Half Girlfriend) reveals a few key characters before it leaves us at a strategic cliffhanger. Protagonist Keshav Rajpurohit drinks every night with roommate Saurabh to get over his ex-girlfriend, a Kashmiri-Muslim, Zara Lone. It just so happens that Keshav’s dad is in the RSS — which we find out before he climbs up to the balcony of her room after receiving a text inviting him over. But Zara isn’t waiting up for him as she usually does; in fact, she won’t wake up. That’s when we hear the sirens wail... and, we find ourselves itching to find out what happens next.

But Chetan isn’t about to give anything away just yet. Certainly not after carefully crafting “tension throughout the story”, he shares. Although, he assures us, this will be a fun read all the same, “I wanted to keep the humour element, which my readers have liked in all my previous books. Hence, I wrote the story of two bumbling detectives, Keshav and Saurabh who are no forensic experts, but rather teach in an IIT coaching centre. I felt that would make the characters more relatable, the story more fun and different from other typical thrillers.”

Reading with Chetan
I just finished The Subtle Art of Not Giving a F**K. Right now, I am quite busy with the book launch, but I have a whole collection waiting. The next on my wishlist is Skin in the Game (by Nassim Taleb).

The Kashmir connection
The IIT association in his books, fans will know, come from his own background of Mechanical Engineering from IIT Delhi as a student before he became an investment banker and went on to pen his first book, Five Point Someone, over a decade ago. Also, a running theme with his books has been a rich socio-political backdrop to make for a more relevant, gripping read.” In The 3 Mistakes of My Life, it was Ahmedabad at the time of the Godhra riots. In Revolution 2020, it was corruption and scams. Whatever is happening in India today, will often be found in my stories,” the 44-year-old shares.

Whatever is happening in India today will often be found in my stories. I felt that many stories had come about Kashmir, but almost all of them directly went into the militancy aspect of the state. There’s more to Kashmir, and keeping it as a backdrop of an investigation increased the tension (of the story). The hero’s father being in the RSS and his girlfriend being a Kashmiri Muslim also lends an interesting conflict to the story, and I had a chance to show the prejudices we live with, in India today.

In The Girl in Room 105, he skilfully weaves in the longstanding Kashmir issue into the mix, as revealed in the promo. We discover later that Bhagat, in fact, spent some of his childhood days in Kashmir (which may have led to this part of the backdrop), as his father was in the army. “I felt that many stories had come about Kashmir, but almost all of them directly went into the militancy aspect of the state,” he says, lending some perspective. Here, instead, the location is used to heighten that sense of tension that he repeatedly speaks of, through the story. Interreligious romance is also addressed, he lets on. “The hero’s father being in the RSS, and his girlfriend being a Kashmiri-Muslim, lends an interesting conflict to the story, and I had a chance to show the prejudices we live with in India today,” says Bhagat.

One love
We have to wonder — in light of recent events — with several love stories and now an ‘unlove story’ to his credit: would Bhagat ever consider writing an LGBTQIA+ love story?

The author’s response is bold: “Whether Section 377 was decriminalised or not (which I am glad it has been, something I have argued for years) — I could still do an LGBTQ story.” But he adds, “This is provided I understand the community well enough. Frankly, as of now, I don’t think I have enough insight to do a full story on the subject.”

Read kindly light
What he does have expert insights on, from interactions with young readers over the years, is a
glimpse into the minds of India’s youth. In addition, he says, “I do motivational talks which help me connect with my readers directly, as it is a face to face live interaction.” And what he has gleaned from all the Q and A sessions might surprise you. “I think the biggest hurdle to Indian youth is a lack of role models and clear opportunities. They want to get ahead, but frankly don’t know how to go about it,” he tells us. To this end, he says that he is very happy to give back, inspire and offer direction.

As for the mantle of one of India’s most popular writers — it is a tag that comes with a responsibility that he takes very seriously.“I have to be mindful that I have a large microphone in hand, and whatever I am saying is being broadcast in a stadium. That automatically reminds me to say things a little more carefully. However, I also know that free speech is important, so I don’t want to hold back too much on what I really want to say. I would, however, not glamourise drugs in my book for instance. 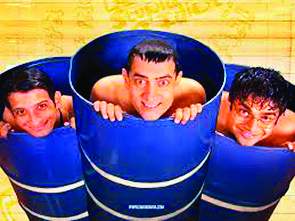 Never say die
When he wanted his first book to get published, it was rejected by almost nine publishers. Good thing he wasn’t deterred because today, five of his books have inspired Bollywood films —  Kai Po Che!
(Three Mistakes of My Life), 2 States, 3 Idiots (Five Point Someone), Half Girlfriend and Hello
(One Night @ the Call Centre).

Then and now
In 1994, when he worked at Cadbury’s factory at Lonavala under the IIT Internship, he got his first salary of Rs 1, 500. Fast forward to April of this year, and Bhagat, after a 14-year association with Rupa Publications, has signed an exclusive deal with Amazon-Westland.

Hooked in 2 minutes
To stay relevant with readers, Bhagat’s newest book promo is a two-minute-long movie-style
trailer. Directed by Mohit Suri, who also directed Half Girlfriend and starring Vikrant Massey as
protagonist Keshav Rajpurohit, the video has had over 726K views on Youtube in one week, and
counting. The relatable characters, fast paced storytelling and cliffhanger at the end, beg our curiosity — and the book isn’t even out yet!

To act or not to act?
With readers already asking if this book is being considered for a movie script, given that five of
his nine books have already inspired Bollywood films like 3 Idiots (Five Point Someone) and Kai Po Che! (The 3 Mistakes of My Life) — we leave the author with one final question. Would he consider broadening his horizons to acting? After all, who better to play a Chetan Bhagat character than Chetan Bhagat?

“I think I know my characters better than anyone else,” the author declares, “but I also know my hopeless acting skills better than anyone else!” He adds with candour. “Acting is an art form, and while it looks simple, it is not easy to do it. I can be on stage or the screen as myself — as in playing Chetan Bhagat and saying what is on my mind. I can’t however, play somebody else or enact from a script. I know my limitations, and I’m happy writing the lines!”