Ahead of De De Pyar De, Rakul Preet speaks to Indulge about films, fitness and causes close to her heart

Golf is said to be one of the few sports in the world where one competes with one’s own self. That’s why Rakul Preet, the unstoppable star of Southern cinema, believes in ‘I, Me versus Myself’ battles, and she truly loves the game of golf. While most other stars claim that they never face competition, Rakul says she’s always walking the talk when she’s out golfing, in her free time — free time, of course, being a limited commodity today. The truth is that Rakul is extremely busy juggling multiple roles. Her next big Bollywood release, De De Pyar De (DDPD), opposite Ajay Devgn, is slated to hit theatres today, and she’s busy with its promotions. Next up, has to look her usual glamorous self for Manmadhudu 2, in which she stars opposite Tollywood star Nagarjuna Akkineni, which is currently in the making.

Meanwhile, Rakul’s early morning post on social media shows her planking for 20 seconds, before she engages in 10 squats with weights, and throws a weight ball to the ground in her own gym, F45 Training, in Hyderabad. The stunning actress is a veritable ‘josh machine’ 24x7, and her 7.5 million fans on social media get to witness her lust for life in all its glory, every day. She doesn’t even let her fans stay complacent either. Rakul recently conducted a contest for her fans, where the top three winners got to take a helicopter ride in Mumbai last May, as she launched her personal app. 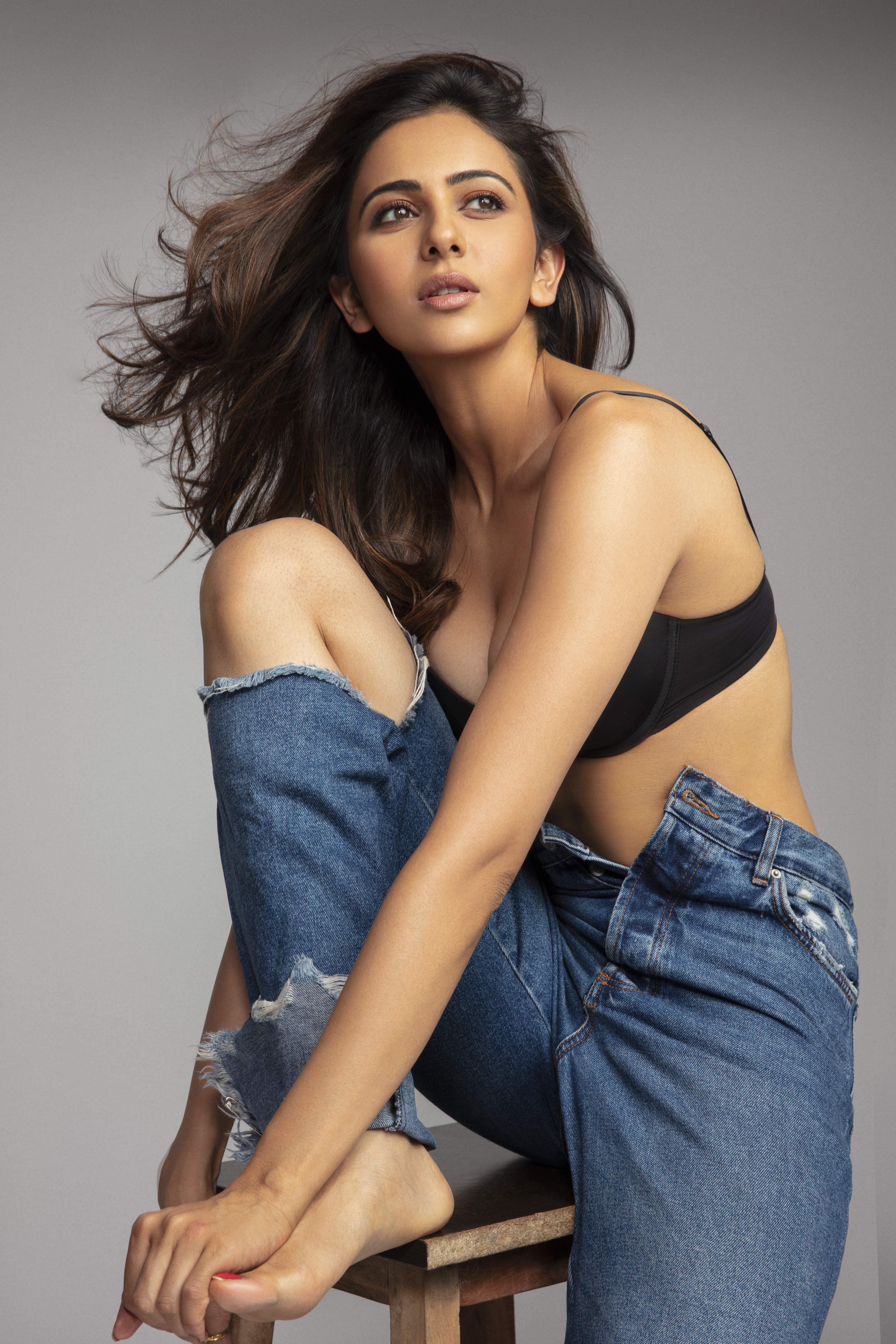 Getting her food fundas right
Rakul loves personal challenges. Her competitive spirit is evident in her workouts, her movie line-up, and even the way she consumes her food. Most recently, she turned into a rice and ghee evangelist.
Speaking to us over the phone in the middle of a hectic schedule, she says, “As I am a fitness freak, many friends and tonnes of fans in my social media timelines, ask me if carbs are bad. I wanted to let them all know once and for all that white rice with ghee is a good combination. Sweet potato is another slow carb that is great for your body, but has just been a victim of bad branding. I share such food nuggets every week with my community,” says the actress, adding that she loves to experiment with food, and has even tried making tikkis with fish and broccoli.

Love to stretch, twist and turn
“Ever since I told a friend that I was working out at the airport gym, when I had a six-hour layover, the word that I am fitness freak seems to have been doing the rounds. I had a long flight, and it felt nice to stretch myself that day, but that episode really went viral. For me, working out is like meditation. On the contrary, I can never meditate. I am an activity monster — I need to be kept engaged or I will bug you. I love to hustle, move my body, stretch, twist and turn and use my energy. As regular Vinyasa Yoga looked too static for me, I tried Aerial Yoga (yoga done using a swath of fabric suspended from the ceiling, used as workout equipment). I find that it stretches and relaxes me. You see, I always love to stretch myself thin,” she explains.

Interestingly, she was asked to lose 10 kilos for her role in De De Pyaar De. “Just as you think you have reached the optimal weight, and gloat about it, someone around bursts that weight bubble,” she exclaims,  with a sigh. However, the good sport that she is, the 28-year-old Punjabi girl enjoyed losing all that weight — only to win big.

In constant touch with fans
At the moment, Rakul is on her toes, city-hopping across the country, for the promotions of DDPD. But unlike many stars who tend to follow strict terms and conditions for media interactions — for instance, ‘only four minutes to TV and eight minutes to print’; Rakul is comfortably on a roll, when it comes to interactions. She even believes that the interviews are the best part of being an actor, as these exchanges get directly beamed into her fans’ homes and phones. 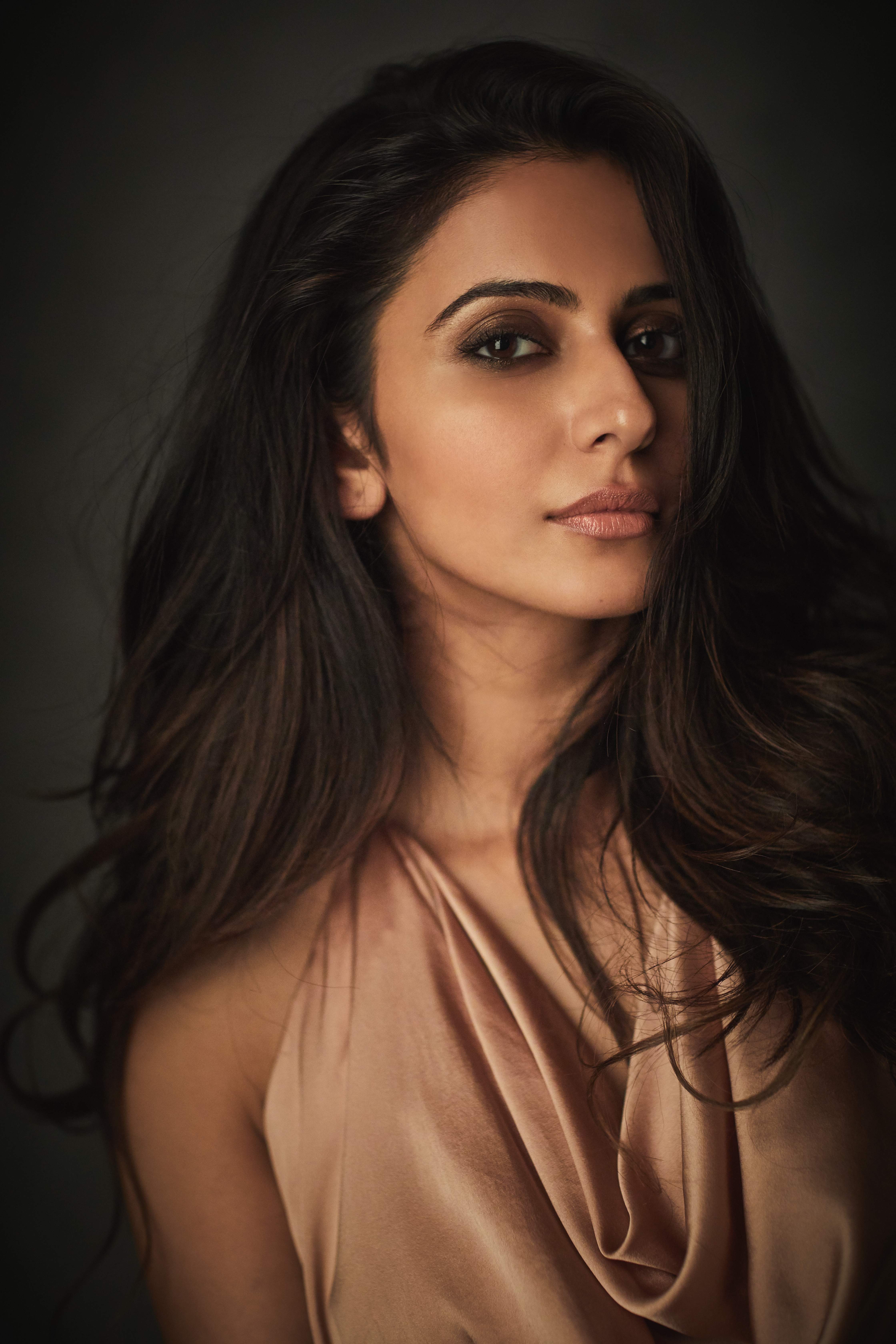 The actress recently launched her own app (Rakul Preet by Escapex on App Store and Play Store, with 50K downloads since its launch in March 2018) which allows her to keep tabs on her top three fans, and pick winners for contests such as Chopper Ride with Rakul, and so on.

Business with a human face
In the last three years, the NGK star has also invested in the F45 gym franchise, and runs two centres of the network in Hyderabad and one in Vizag. She says that while fitness is a natural extension of her daily routine, it is perhaps even a retirement plan for her. But how much time does she get to over-
see her business? “With technology and apps, I am never too far from my business. My parents and dedicated staff take care of everything, and keep me in the loop. For me, fitness is not just about weight loss or weight gain, but being able to help transform lives. One of our gym regulars, a 40-plus woman from Vizag, came up to me and said that losing 50 kg has changed her life, and she says she gets inspired by me. That’s business with a human face, for me,” she declares.

On a full filmi high
When it comes to making her next move in cinema, Rakul’s mantra is, ‘Grow well and choose right’. She explains, “It’s important to work on different strategies at various stages of your career. In the first three years, it’s about being seen, getting heard and becoming a part of blockbuster movies. Once I got noticed, and bagged a decent number of films, I wanted to go to the next level. That’s when movies such as Khaki and Dhruva happened. Both these movies put me in a different league, and got me author-backed roles such as that of Brahmaramba in Rarandoi Vedukachoodam, in Telugu, opposite Naga Chaitanya. I noticed that the vibe I come back home with, after shooting a great part, is different from the one where I shoot for an average one. I want the same high every single day after work, and I’m choosing projects that give me that (high).”

She will soon be seen acting opposite her Aiyaary co-star Sidharth Malhotra in Marjaavaan and in Manmadhudu 2 with Nagarjuna Akkineni, besides two other releases in Telugu, and NGK with Suriya in Tamil.

Eat, pray, write?
While she remains engaged at all times with her movies, business and brand endorsements (such as of mobile store Big C, until recently), she is also the brand ambassador for Telangana’s Beti Bachao, Bedi Padao campaign. “It’s a great platform to tell people — especially in rural areas, who know me — that their daughters must no longer be thought about as liabilities. Star magic does work at the grassroots level, and I believe I can change the world when I associate myself with such causes,” reasons Rakul. That actress recounts how people from as far as Araku in Andhra Pradesh, and villages from interior Telangana, have conveyed to her that her words have a truly positive impact on the way that they look at girl children now. Right now, Rakul is also a part of the campaign’s hoardings and other promotions.

What’s up next?
For someone who is always looking to get to the next level in the game of life, what’s next? We have to ask: A directorial debut? A book? Rakul replies, “Yes, but only if someone agrees to write on my behalf. I can talk, but I can neither sit nor write. That’s too static for a mobility addict like me. But I have loads of spiritual takes on life. Can someone please turn into my stenographer for a month please,” she asks, by way of raising a plea. Among the many spiritual projects she has taken up, the actress has also been in a 100-minute live interaction titled #MissionLife with Sadhguru (founder of Isha Foundation) in Hyderabad.

Quickfire takes: Jaldi five
■ Favourite pastime: Golfing, but I get to do it just once a month, as most golf courses are on the outskirts of the city.
■ Onscreen addiction: Netflix, only when I’m outdoors.
■ Pet causes: Health, fitness and education —  three things I believe will guarantee 80 per cent happiness in your life.
■ Role models: Deepika Padukone and Anushka Sharma, two women who reached the top on their terms, and have diversified into other things too, besides cinema, and given all their ventures their complete commitment.
■ Bucketlist: Surfing, diving and snorkeling.