The golden chord: Independent artiste and music composer Govind Vasantha is a man of fearless resolution

Recently, A R Rahman was asked by a TV show host about promising talents in the film industry, and the first name he took was of Govind Vasantha, a 30-year-old composer from Kerala. He may have become a familiar name in the South after Prem Kumar’s 96, but for those who follow the indie scene, this self-taught musician has a different identity too. He’s the frontman and driving force behind Thaikkudam Bridge—the first Indian band to perform at Summerfest in Wisconsin, the USA, certified by the Guinness World Records as the world’s largest music festival. Hailing from Thrissur, and having lived in Chennai for most of his career, Govind’s life changed after the band’s popularity jolted him into the spotlight. In the last five years, he has made the best of that—from forging his own identity as a music producer to placing his band in the international music scene. To borrow Bruce Lee’s words, he is like water, not hesitant to shape up and lash out at many things.

Govind’s fluidity is, however, not limited to work and art. He lost around 30 kgs in the last six months through a rigorous diet and exercise regimen to fight a personal war on body shaming. “I’m just proving a point, these small wins matter a lot to me,” he says, elaborating on his reasons to make the changes he has. Despite this fearless resolution, he still appears to be a simple man at heart. He openly admits that, initially, he couldn’t even watch the video where the ‘Mozart of Madras’ mentioned him. “There was a time when I rented a house next to Rahman’s, just hoping that I would catch a glimpse of him going in or out of the studio. To transition from that phase to hear him say my name is beyond imagination,” he adds, with utmost enthusiasm.

Currently, besides the release of a multi-artiste album Namah from his band, this music director has over 10 movies including Vijay Sethupathi’s Tughlaq Darbar in Tamil, a remake of 96 in Telugu, and Nivin Pauly’s Padavettu in Malayalam in the works. Despite his busy schedule, Indulge got him to sit down for an exclusive interview on his life, music, beliefs, and goals.

Genes over genres
When Thaikkudam Bridge launched in 2013, the 15-member outfit received plenty of ridicule. Many people thought they were overcrowded, but for Govind, who comes from a family of musicians, that didn’t matter. “Back when I was a kid, a function at home meant around 40 of us sitting around and singing during power cuts,” he recollects. His 63-year-old father, Peethambara Menon, is a vocalist who now sings and performs with the band. Most of their songs are written by Govind’s sister, Dhanya Menon. His first cousin, Siddharth Menon, is a singer and actor too. Growing up, however, Govind was in love with guitars, despite his dad’s insistence that he pick up the violin. “In my head, it was cooler to be playing the guitar because all the girls used to like it,” he chuckles.  In 2011, he performed on India’s Got Talent, a national TV show that featured amateur artistes from all over the country. The appreciation he received filled the violinist in Govind with a lot of confidence. Two years later, he was called in for Music Mojo—the show that made Thaikkudam Bridge and launched Govind into the field of indie music. Performing with his father Peethambara Menon

The project started by playing covers of familiar Malayalam songs and international numbers like Metallica’s Nothing Else Matters and their first original Fish Rock. Due to this, they were soon typecast and called out for being genreless on social media by their contemporaries. “I used to get frustrated and even lashed out a few times. I deeply regret that now. That would have made me as temperamental and cowardly as they are,” he recollects. Once their first album Navarasam released, Govind effectively shut down the haters. He blended Eastern classical and folk influences like Kathakali Padam and Poothapattu with a metal framework in the well-produced songs on that release—an experiment that got them to Summerfest. Thaikkudam Bridge’s forthcoming sophomore record Namah, expected to go on floors this year, features nearly a dozen artistes from around the world, including Jordan Rudess from Dream Theater, world-class drummers like Chris Adler and Marco Minnemann, veena maestro Vishwa Mohan Bhatt, and Avial’s ex-vocalist, Anandraj  Benjamin Paul. 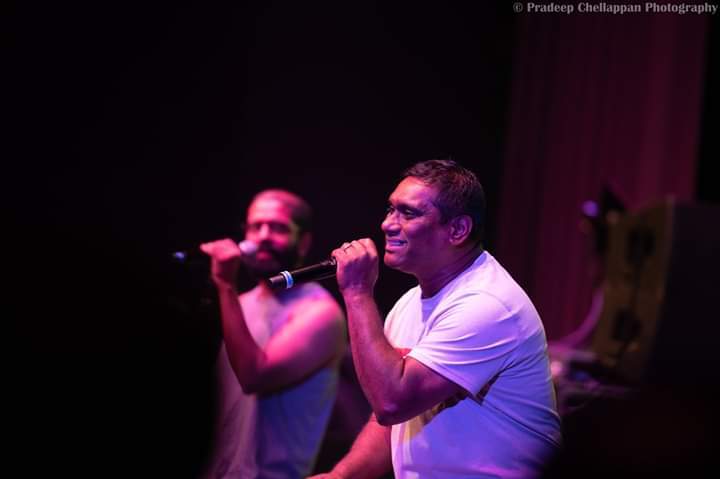 State of mind
Govind is a musician capable of creating versatile sounds—one that aids his energetic stage performances with the band, and the other that compliments human emotions in a movie. This switch between being an independent musician and a film composer might be hard work for most professionals, but he claims that it is all a matter of perspective. “For the band, I make music that I love listening to. Movie songs are all about the characters that are at play, and I connect deeply with their lives before composing,” he says. After his debut in 2012 as a singer for Malayalam movie Thiruvambadi Thamban, Govind waited till 2015 to start in the Tamil industry as a composer. His love for Tamil films is apparent as the industry gives him the most freedom to be himself. “They have given me the space to make music beyond the four-minute cut-off. Most songs in 96 are seven-minutes-long, but there was no pressure to compromise,” he adds. And though he passed on a much-awaited project with Mani Ratnam for his band’s USA tour, he is hopeful of good projects coming around when it is time. 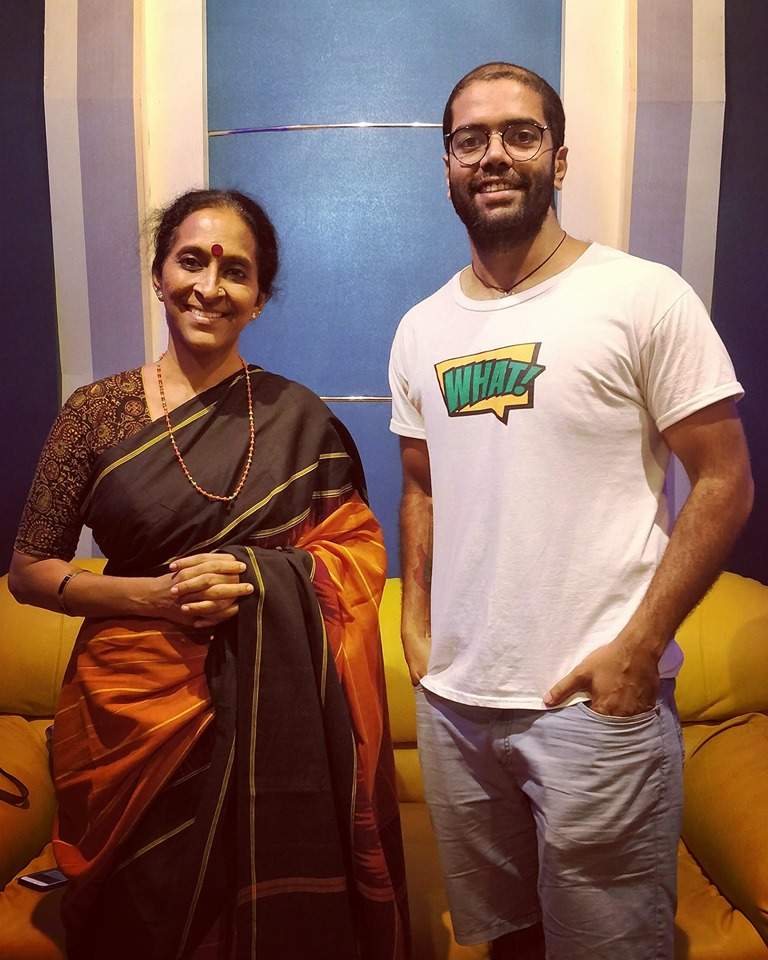 Straight forward
Even as he is rising in the ranks, Govind is uncompromising when it comes to certain things. He calls himself a feminist, and officially changed his surname from ‘Menon’ to ‘Vasantha’ after his mother. “I hate caste and segregation. But, a stronger reason for that is because I have never heard my mother’s name anywhere. She will be known after me,” he clarifies endearingly. The violinist also took a strong stand in favour of singer, Chinmayi Sripaada—after she faced backlash for opening up about the harassment she faced in the music industry. Any artiste who wants to thrive in a conservative system would think twice about making such a statement, but Govind instinctively reciprocates to that query with an ‘I don’t care’. “I used to idolise people and have a bucket list of artistes I want to work with. But, that is not the case anymore. I’m an independent musician first, and there is no politics in that. If I lose movies for being myself, I would just let it go,” he concludes. 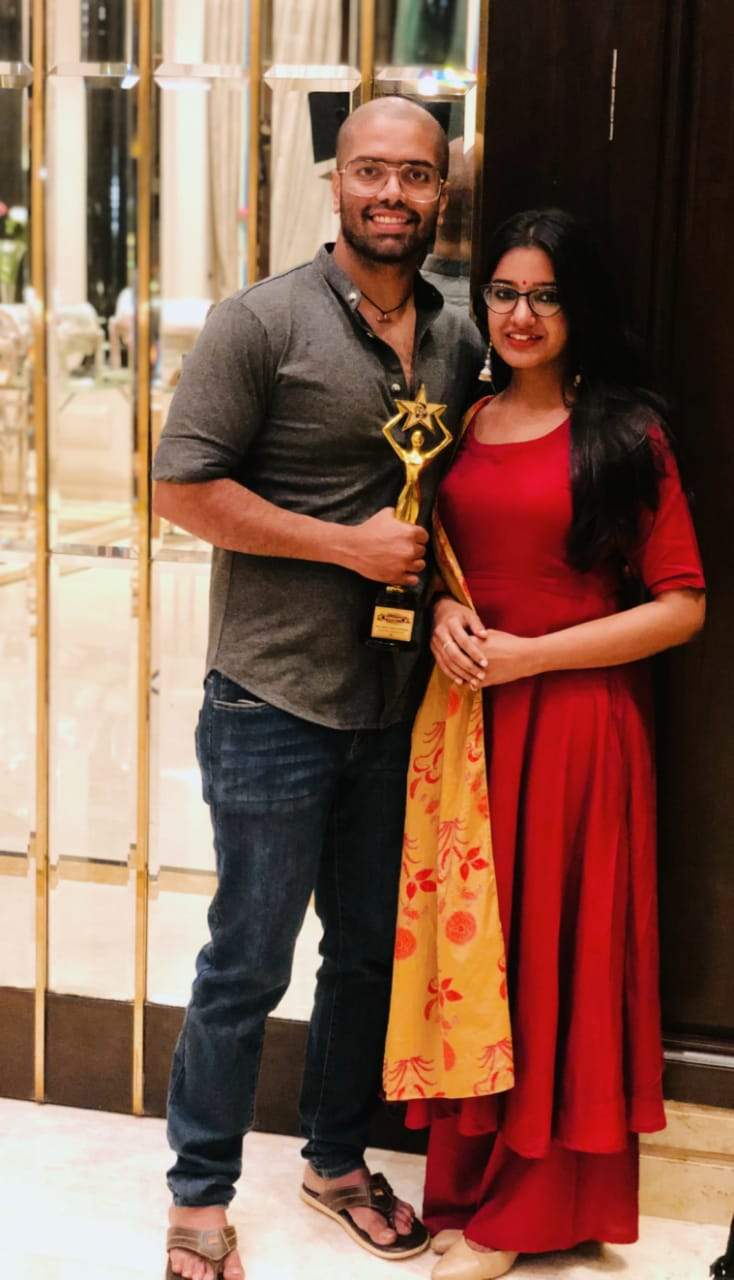 With his wife Ranjini Achuthan

His rigorous self-evaluation is probably what keeps Govind grounded and growing. On May 31, he put up an Instagram post marking the completion of his six-month-long fitness regimen that helped him lose over 30 kgs. It was, however, more than an attempt to show off. He opened up to followers about how years of fat-shaming affected him. “I started noticing the small things—I would be at a movie theatre and someone would joke about how I would need two tickets. Or at a wedding, people would watch me eat and smirk. Unfortunately, this even came from close friends and family. We don’t realise how much it affects those in the receiving end,” he explains. Nevertheless, he also adds that losing weight is not a solution to body shaming. “Acceptance is the real solution. Personally, this is how I chose to deal with it, but I don’t expect anyone else to change themselves unless they want to,” he confirms. Govind now follows a strict diet and hits the gym without fail to keep up his fitness. “It changed my life, from cooking my food to sleeping early, this was another transformation that I took very seriously,” he adds.

Today is a very special day for me. Today marks my first ever gym anniversary. A day that changed my life forever. And for good. It changed the way I looked at things, including myself . The way I looked at problems that life threw at me, the way I used to give up easily. A lot of people still ask me why I suddenly decided to transform, hit the gym, workout daily. For all who want to know, here it is, loud and clear: BODYSHAMING. Simple. Yeah I know, lot of people find it very silly, and call "us" snow flakes. Well, y'all can take it however you want but bodyshaming has affected lives like a serious disease, one that eventually affects a person's confidence and social life. One that builds the fear of getting mocked at everything which eventually leads to hating oneself. Bodyshaming triggers inferiority complex and could lead you to depression. I am a glaring example. A victim. You guys should know, that nobody, and I repeat nobody around me even remembers or realises that they have bodyshamed me at various points of time. I have been called fatso, the one with bigger breasts than the ladies in the room, or an idiot based on my looks. That is just the way the world works. Bodyshaming is a silly issue for most. Most of the people don't even notice shaming . But, the victim who becomes the butt of jokes again and again, internalises the trauma and ends up miserable both mentally and physically. Either that or those taunts and words of disgust and mockery end up becoming the fuel to a path of self discovery. And so here I am, after 1 full year, looking and feeling better than ever. And for that I thank all the body shamers of my life. Thank you. My heaviest 110 kg To Today my Lowest 80 kg And a long long way to go. #mytransformation #fattofit