Exclusive! King of swing Bhuvneshwar Kumar reflects on his innings so far, his love story, and what keeps him calm

Bhuveneshwar Kumar, or ‘Bhuvi’ as his fans like to call him might be a cricketing sensation but when he’s off the field, he is a tall, dreamy-eyed lad without any trace of pompous celebrity airs. When the set-up is ready for our photoshoot at Hyatt Place Hyderabad/Banjara Hills’ plush rooftop space, he walks in promptly on time wearing a basic ASICS tee shirt and tracks with a shy smile, set for the second store launch of the Japanese sports performance brand, later that noon. Through it all, he reminds you of the calm Bhuvi you have seen on the field, even as he is menacing to all the international batsmen he is bowling to! When we ask him about the secret to his posed self, he reveals, “It’s in the genes. My family and close friends usually point out that I’m a lot like my father, who is also calm and composed. It’s not something I try to be, but this is who I am.”

Incidentally, this Meerut-born cricketer completed seven years in the industry recently, since his debut with a T20I India vs Pakistan match in December 2012 in Bengaluru. He took three wickets in nine overs, making sure to leave a mark with his first big match. Looking back, he admits that there are very few moments in his career that could be as memorable as this one. “My debut will always be the biggest highlight of my career. It was special and a memorable one,” says the 29-year-old, adding, “It’s been a roller coaster ride — just as fast with its set of ups and downs. I wouldn’t want to have it any other way.” 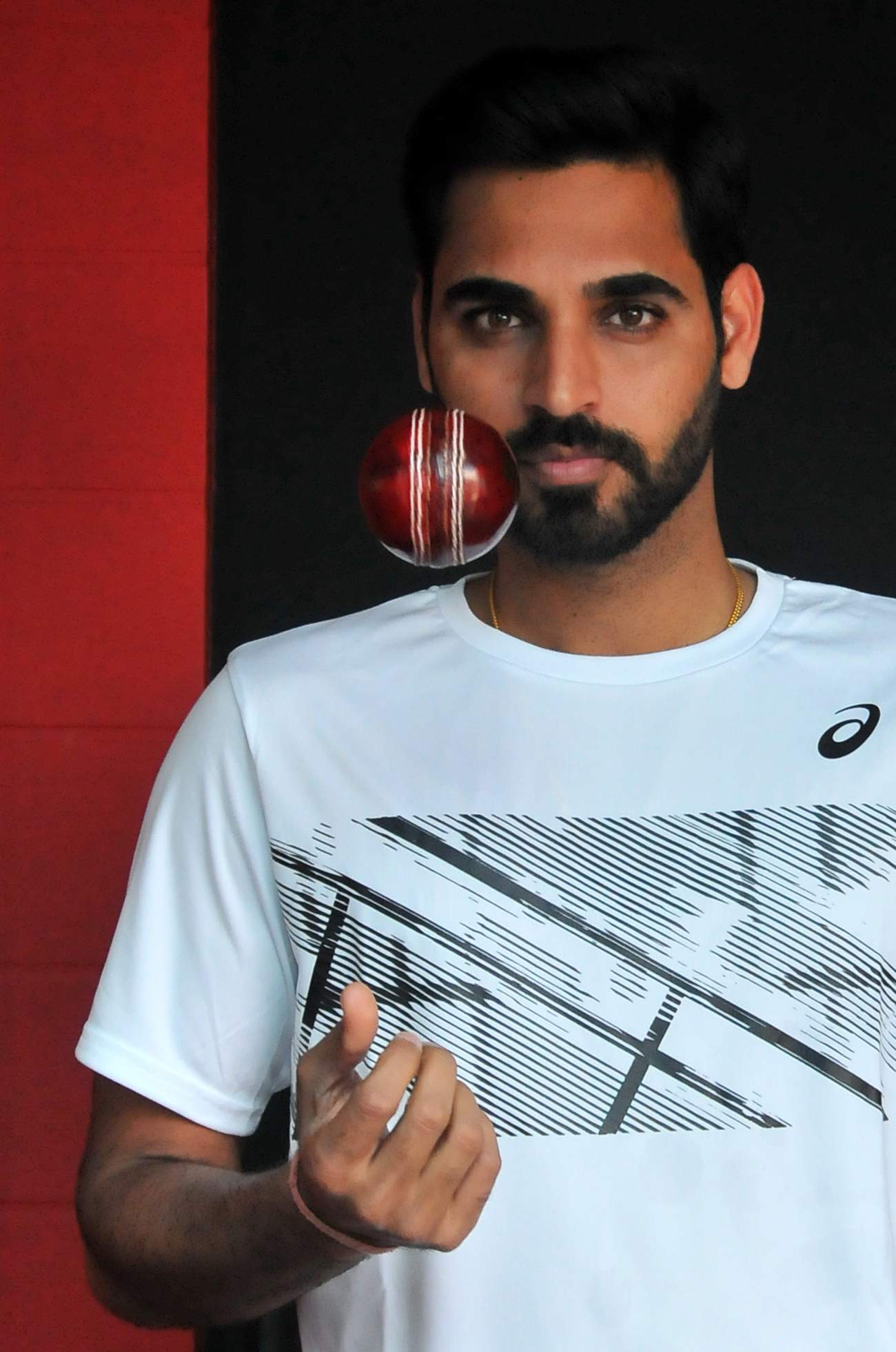 A dream debut
Even before he entered the One Day International (ODI) circuit, this swing bowler turned heads with his ‘dream wicket’, when he handed the legendary Sachin Tendulkar his first duck in Indian domestic cricket. The then 19-year-old was definitely living his dream. With a five-wicket haul in this Ranji Trophy final in Hyderabad, he had already become a name that cricket lovers will remember for a while. He followed it up with a stream of successes. The athlete opened his account in ODIs by taking a wicket in the very first ball that he bowled, dismissing Pakistani cricket player Mohammad Hafeez.
In his debut Test series, he took six wickets in four matches against Australia in the 2013 Border-Gavaskar Trophy. He also shared a record partnership with India’s former Captain cool MS Dhoni for the ninth wicket in the first Test of the series. Although Bhuvneshwar usually operates at an average pace of early 130s, he established himself as a mainstay in the bowling unit of the Indian cricket team in the years to come. 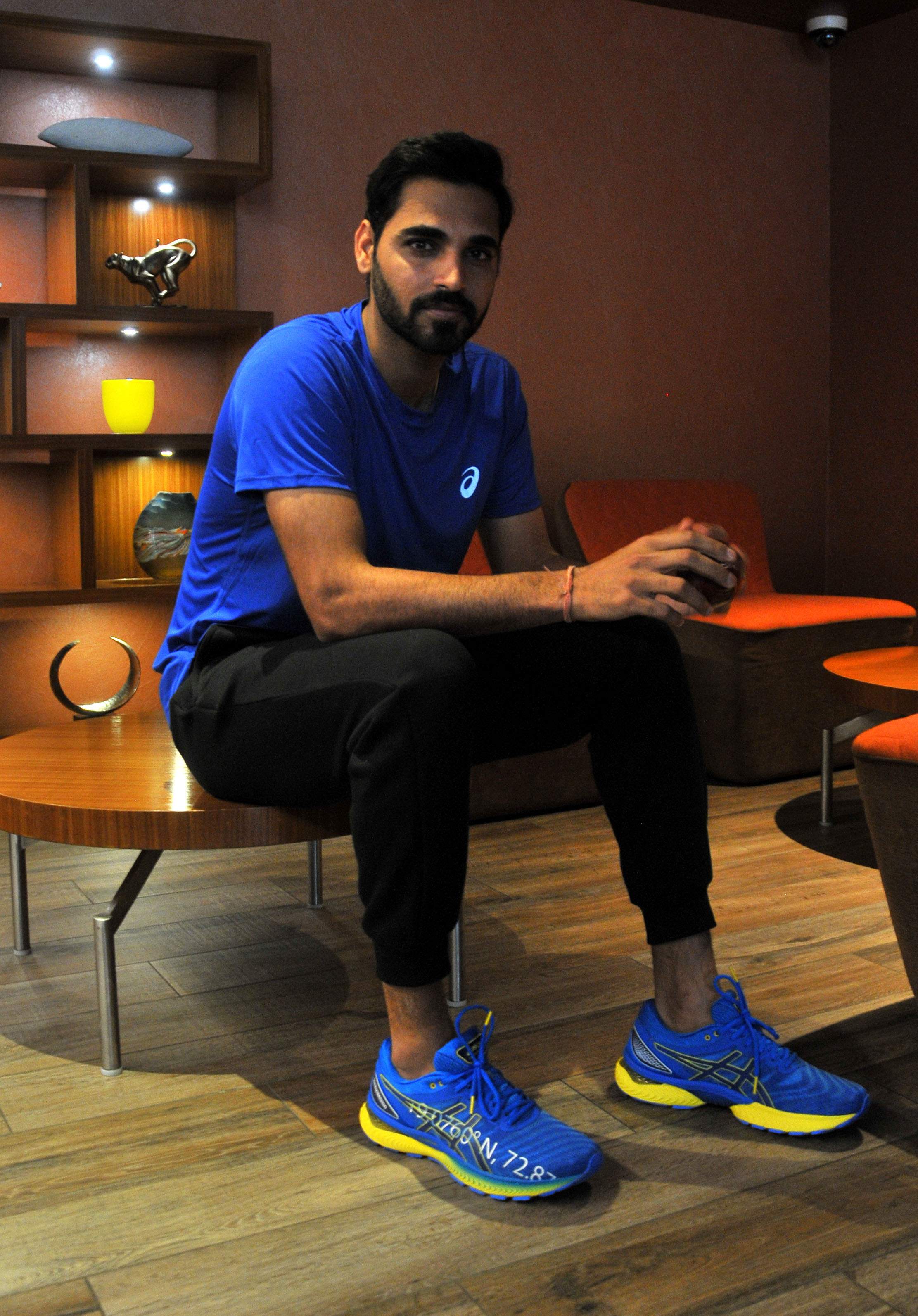 Sister act
It all started when his sister, Rekha Adhana, encouraged her teen brother to join a cricket coaching academy in their home state, Uttar Pradesh. The then 13-year-old was fascinated by the game, thanks to legendary cricketers like Sachin Tendulkar and Sourav Ganguly. Like many other Indian kids, Bhuvneshwar too had spent his holidays playing gully cricket and was more than happy to join an academy. Little did he know that one day, he would be a part of the national team. Interestingly, he points out that he never considered the prospect of becoming a full-time cricketer. “I didn’t even think
I had much of a chance till I was selected in the Under 15 team in UP,” he recollects, adding, “As a child, I enjoyed playing cricket. But I had no big plans, though I realised eventually, that it became my passion.” 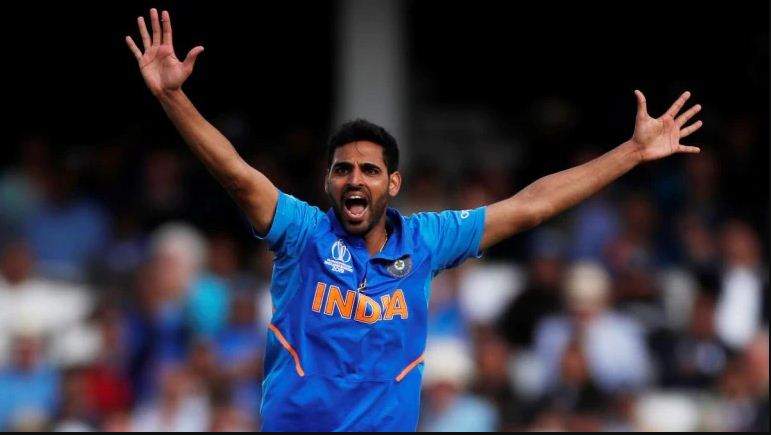 However, his journey wasn’t a bed of roses. A couple of years into playing the sport professionally, Bhuvi had to create the right balance between his pace and swing. “Initially, I was a swing bowler.
But as my pace developed, coaches told me that I had lost my swing. I spent a good number of years to overcome this. I kept going back to coaches, practised a lot more and finally, things got better,” says the right-arm swing bowler.

Love in the time of cricket
Cricket is not the only game he enjoys playing, however. When he is not on the field, Bhuvneshwar spends his time playing video games. He is a big fan of FIFA and loves playing them with his teammates as well. “If I’m not playing or training, I’m quite a lazy person. Video games encourage that laziness in me even more. I sit in my room and play FIFA all day. My wife (Nupar Nagar) has banned me from playing PUBG,” he says with a laugh.

If you glance through his Instagram account, which has about 2.5 million followers, you’d notice that Bhuvi’s life is all about cricket and family. He admits that he is quite a family man. “I wouldn’t have been where I am today without my family’s support. Even when I’m going through a difficult phase in my career, I have my wife and parents to fall back on,” he shares. Married to his childhood friend Nupur in 2017, this cricketer is all about spending quality time with his wife, despite his busy schedule.
The usually reticent sportsman needed a gentle nudge to start talking about his love story. Giving in to our demands, he recollects, “We were neighbours who would play together with other friends when we were much younger. As we grew up, she moved out for college and I started to get busy with cricket. Thanks to Facebook, we reconnected. Like many other love stories, it started with a simple hi. Now, we’ve been married for two years. She has been there for me in every big step of my life.”

The healing process
Bhuvneshwar ended 2019 on a bitter-sweet note. It was a rather crucial one for him with a few lows, due to injuries. “I never planned my life. I believe in going with the flow. Injuries are frustrating at times because you can’t play and you get restless. But it’s inevitable in the field of sports. I’m hopeful that I will make a comeback soon,” he confesses.

Many athletes worth their salt have taken time to recuperate, and give their bodies the rest required when injury bogs them down. He was forced to experience this setback — but he seems to be smiling through this phase, taking it calmly only to rise like the phoenix from the ashes, when the time calls for it.

Weight for it!
Bhuvi had already established himself as a relaxed person during the interview. So, we were not surprised when he said that he escapes from hitting the gym on days that he can afford to! “As a cricketer, fitness is important and I train on days I’m asked to. But given a chance, I would skip my routine,” he says with a laugh. “On regular days, I do a lot of weights and cardio.”

When the sun rises
Apart from his achievements in ODIs and Test matches, Bhuvi won the hearts of cricket fans across the country, especially Hyderabadis, with his two-time Purple Cap win (award presented to the leading wicket-taker in the tournament) in Indian Premier League. After having played for Royal Challengers Bangalore and Pune Warriors India, he joined Sunrisers Hyderabad and led the Orange Army as the Vice-Captain. “Hyderabad has a special place in my heart. Apart from playing for the team, I also made one of my first single centuries here. My dream wicket against Sachin (Tendulkar) in the Ranji Trophy was also in this city. I’m eager to prep for the next IPL for the team,” he says. In Bhuvi’s shoes
Talking about his favourite sports shoes, the ace cricketer says, “Being a bowler, I love ASICS (Japanese sports performance brand) shoes because they blend technology to make comfortable pairs for sportspersons.”

(With inputs from Paulami Sen)