In an age where TV monoculture is fading, have the GRAMMYs become irrelevant?

Michelle Obama cannot carry a tune to save her life. She has said so herself. However, the former First Lady of America is amongst the hundreds of final nominees from across 84 categories touted to win a gilded gramophone at the upcoming 2020 Grammy Awards. Michelle’s listed as her memoir Becoming appears in the Best Spoken Word Album category (which includes poetry, audiobooks and storytelling).

For pop music aficionados, who have kept a close eye on the 62-year-old Recording Academy’s annual award ceremony, colloquially dubbed ‘Music’s Biggest Night’, such head-scratching nominations might not come as a surprise.

The non-profit organisation is going through a rough patch. After fielding numerous charges of inciting sexism, dire lack of representation, and ‘not being in touch with modern music’, the Academy is attempting to step in tune, again. They let go of their previous president Neil Portnow after his infamous ‘women need to step-up’ comment that led to #GrammysSoMale trending worldwide.

Then they roped in Deborah Dugan — the first woman to lead the Recording Academy. Yet, barely five months after Deborah took charge, she has been ousted under the guise of an ‘administrative leave’. Mere days before the red carpet unfurls!

Many industry insiders cite it’s because she tried to stir up the rigid structure of the traditionally conservative governing body. Chuck D, frontman of Public Enemy — an outfit that famously penned the lyric ‘Who gives a f*** about a goddamn Grammy’ in the ’80s — has publicly stated his support of the former CEO.

“I salute Deborah Dugan for her truth and courage to try and affect change. As always, a bunch of ignorant, testosterone-fueled, usually old white men stops progress,” wrote the rapper. He’d previously agreed to receive the 2020 Lifetime Achievement Award, only because Deborah called him.

Signs of a sinking ship? 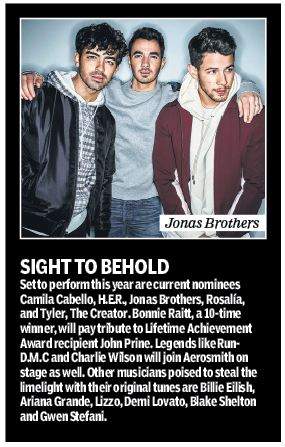 Over the years, fans from this era of streaming have been quick to note the Grammy’s growing obsolescence in the pop-culture spectrum. In 2019, this systemic flaw of recognising the best and most relevant music resulted in luminaries like Beyoncé, Kendrick Lamar, Justin Bieber, and Rihanna skipping the gala. Even Donald Glover and Ariana Grande—both of whom won big—were no-shows! Plummeting TV ratings are another concern for the Academy.

So, it doesn’t come as a surprise when executive producer Ken Ehrlich, who anchored the Awards telecast for 40 years, announced that he is bowing out after the current show. The Late Late Show With James Corden’s executive producer Ben Winston will take over in 2021.

In an attempt to salvage its fading musical hegemony as TV monoculture ebbs away, the establishment appears to have taken several steps. Contemporary R&B musician and advocate of the Time’s Up campaign, Alicia Keys returns as a host at the musical extravaganza for a second time.

“At first, I did think last year was a one-time thing, but when the opportunity came back around, there was no question about returning as host,” the 15-time Grammy winner said in a press release. She adds, “Not only did I feel the love in the room, but I felt it from around the world and it confirmed the healing and unifying power of music.”

To further showcase their current all-encompassing avatar, the Recording Academy has increased the number of voters to 900 experts in various fields of music, with an emphasis on women, people of colour, and those under the age of 39. It’s worth noting that they have actively been trying to make the Grammys more inclusive since last year.

Perhaps as a cascading effect of these changes, the Academy seems to be tackling an industry-wide problem — gender inequality. Female artistes are dominating across the nominations ballot. Particularly in the ‘big four’ awards — Best New Artist, Song of The Year, Record of The Year and Album of The Year. 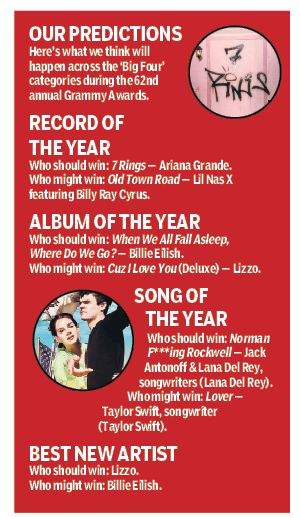 In hindsight, this radical shift in the age of voters led to many veterans getting overlooked, basically, artistes who’ve been giving acceptance speeches decades before the current batch of nominees were even born! In this edition, legacy superstars such as Bruce Springsteen and Madonna fall prey to this, despite both of them releasing critically-acclaimed albums like Western Stars and Madame X, respectively.

In fact, most of the names for the coveted Album of the Year are relative newcomers who are genre-blurring streaming giants: Billie Eilish, H.E.R, and Lil Nas X. The oldest performer in the same section is 38 (Folktronica outfit Bon Iver’s Justin Vernon), while the youngest is neo-goth pop maverick Billie Eilish, at 18.

Erstwhile Recording Academy darling Taylor Swift garnered only three nominations, that too in comparatively sub-par categories like Best Pop Vocal Album. Glance through the comment section of any Grammy-related video and it would appear that the most egregious oversight in recent memory is the complete shutout of K-pop supergroup, BTS.

Nevertheless, the nominations review committee certainly had their hands full. The grand prize aka Record Of The Year received over 1,160 candidates and they had the unenviable task of chopping the list down to eight nominees. Even generally less competitive divisions like Best Jazz Instrumental Album received 302 entries!

The break of a new dawn
If no one cares about the Grammys, then why are so many musicians applying to be nominees? Composers have gone out of their way to ensure their releases fall into the eligibility period that is, October 1, 2018 to August 31, 2019. Case in point: Lizzo, who raked in the most nominations with eight categories after a breakthrough year. The flautist is by all estimates in the running, thanks to her 2017 single, Truth Hurts. This track serendipitously appears on the deluxe edition of Cuz I Love You, released in April 2019, making it Grammy bait.

All said and done, for engineers and songwriters, who don’t appear on camera, having a tiny golden gramophone on their shelf translates to a few more zeroes hatching in their bank accounts. The spike in numbers for streaming catalogues and subsequent change of performance venues is a bonus, for anyone who wins.  Even touring acts, who win non-televised awards, find it easier to gain visas thanks to the trophy bump.

It helps especially if they are trying to sell concert tickets in countries like India or China—to a generation that may have never actually entered a music store or even bought an album! According to concert data provider Pollstar, Taylor Swift’ nightly gross earnings were $1,25,000. Post her 2010 Grammy sweep, the 1989 girl brings in over $1.1 million/per night.

Money talks and everyone’s eavesdropping. Most of us might skip the televised programme and catch the ‘most-buzzed’ Grammy highlights on YouTube. Or maybe share a meme or two, that is certain to arise on the internet—as some performer is bound to do something outrageous or hilarious during the show. But, as long as a Grammy nod remains inexorably linked to a credibility boost, talk of The Recording Academy’s biggest party will keep popping up in the music industry’s lexicon.