Exclusive: Adventurer and television personality, Bear Grylls, talks about his most challenging adventures, filming with Rajinikanth and more

Edward Michael Grylls, better known as Bear Grylls (a moniker given to him by his sister when they were little) has stared death in the face multiple times. But, his near-death experiences have only served to egg him on, and take up increasingly dangerous missions. In 1998, barely 18 months after a parachuting accident in which he broke his back in three different places, he scaled Mount Everest. He was just 23. Since then, he has circumnavigated the British Isles on jet skis, crossed the North Atlantic on an open inflatable boat, set a record for paramotoring over the Himalayas in temperatures of -60 C, hosted a dinner party on a hot air balloon at 25,000 ft, set a Guinness World Record for the longest indoor freefall and even led a mission to Antarctica (which was unfortunately cut short after he broke his shoulder while skiing).

Now 45, he has become a household name thanks to his ‘wildly’ successful adventure-based reality shows such as Man Vs Wild, Running Wild With Bear Grylls, Survivor Games, You Vs Wild and Into The Wild. Grylls’ is the face that springs to mind when you think of extreme adventure, survival, beating the odds… and in answer to the questions, ‘who has the courage to ask Prime Minister Modi if his pants are wet?’ and ‘who can get Rajinikanth to make his television debut — a medium he has shunned in the 40 years since he started acting?’

However, instead of soaking up all the attention he draws with his dare-devil stunts and expeditions, he has used it to highlight numerous worthy causes, right from raising funds for children’s charity Global Angels to spreading awareness about the effects of global warming. Recently named the Global Brand Ambassador for Swiss watch brand Luminox, Grylls, who also launched a special collection of watches designed by him, talks to us about growing up with a penchant for adventure, his private island in North Wales, spending time with family and his experience filming with celebrities. Excerpts:

Tell us about your childhood and what steered you towards adventure and the outdoors.
Adventure has been the driving force of my life ever since I can remember — from growing up climbing with my late dad, to being a Scout and then through my job with the British Special Forces as a combat survival specialist, climber and skydiver. Adventure has been the one constant through so much and it is always rooted in endeavour, friendships, risk and resilience. My goal is always to do my best to inspire those values in young people in any way I can. That’s the mission.

You’ve climbed Mt Everest, crossed the oceans on an inflatable boat, set the record for the longest indoor freefall, and a lot more. What would you say was your best and most challenging experience?
One of the hairiest experiences was probably our crossing of the North Atlantic Arctic Ocean in a small open rigid inflatable boat. It (the journey) was 3,000 miles and we had a couple of intense and very frightening gale force 10 storms. With waves as big as houses, icebergs and the relentless cold, wet and exposure, it became a bit of an epic. It stands out because it taught me the power of nature, the power of friendships and the importance of respect in the wild. We were very lucky to escape that one.

What would you say is your favourite kind of adventure?
My best adventures are the ones with my family. We love escaping to our small island hideaway in North Wales — this really is where I feel most at home. We have no electricity or water and run everything totally off grid, but we love it. Our three boys, Shara (his wife) and I are happier there than anywhere else on earth — adventure and solitude mixed with fun and family. We dive, train, paraglide and climb. It’s a very special place.

You teamed up with Scouts for indoor survival activities during the COVID-19 lockdown. How important is it to have a survival kit when you are indoors?
It’s brilliant to see that #TheGreatIndoors campaign (indoor activity ideas for kids) has been used over 30 million times... to help families have fun and survive indoors during this time. Young people don’t lack ambition, but they often lack opportunity. To bring this access to many more young people is such a driving force for me, especially in my role as Chief Scout. It is all about helping inspire an adventurous streak, a go-getter attitude, a love for life and a willingness to go the extra mile in order to achieve your goals. This is why Scouts is so powerful already and is actively changing so many millions of young lives for the better. But as always, we can do more. In India, in China, there are millions of kids desperate for the opportunities that Scouting provides and I want to see that access become much more available, because I see first-hand how it inspires young people.

You’ve persuaded many celebrities to step out into the wild with you. Who has most surprised you?
To be honest, I think all the guests have been incredible — and I so respect their courage and determination to grab the opportunity and do something out of the normal world. One thing I have noticed is how often we have certain misconceptions of celebrities after seeing them in magazines, that they will struggle on an adventure in the mountains or jungles. But time and again these actors show such amazing resilience and positivity on these adventures and it’s inspiring to see. It reminds us all that survival in life and in the wild is all about attitude and heart. It’s not just about physicality. It’s about the fire inside, that steely determination to keep going when it’s grim, when you’re cold, when you’re hungry and when you’re hurting.

Tell us about your experience filming with Narendra Modi and Akshay Kumar.
It has been a huge privilege to adventure with these Indian icons, and what they shared was a natural humility and warmth, as well as a love for the wild places of this world. The wild and adventure always bring people together and our goal was unified across all these episodes: to show how amazing India is and to show why we have to do all we can to protect our planet. 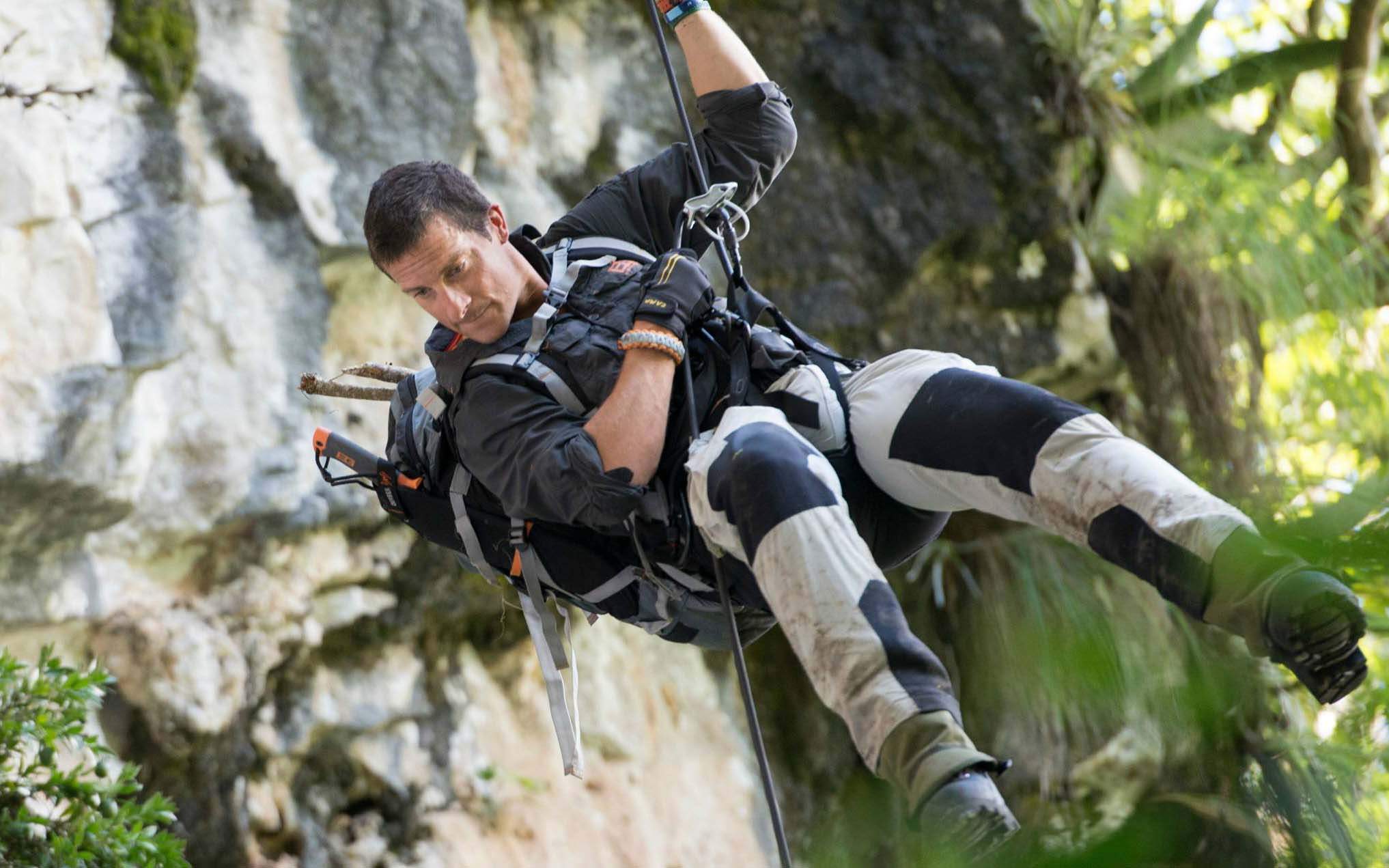 What were some of the challenges of filming with Narendra Modi and Rajinikanth?
Probably dealing with the crowds that seemed to find us even in the most remote of places. Indians are always resourceful! They were determined to embrace the adventure, to trust me and our team and to give it their all. It is why they are such successes in what they do. They have a winning, positive attitude even when the chips are down.

If you can invite three famous people, alive or dead, to a dinner party, who would you choose?
My best friend and artist Charlie Makesy, Roger Federer, one of our previous Running Wild guests and a good buddy, and maybe George Mallory, to find out if he ever reached the top of Mt Everest back in 1924.

How important is a timepiece when one goes on an adventure trip and what are some factors to keep in mind while choosing a watch meant specifically for adventure?
I need something ultra reliable that will weather the storms and knocks with me, to find north, to pace the distance. I love the fact our Bear Grylls Luminox watches are built for a beating, are stacked with innovation and ultimately I can trust them to be up for adventures. In our watches, you can even use the Luminox technology light to navigate in the dark. It is why creating our new range of Bear Grylls watches with Luminox was such a logical step.

What food or drink could you not live without?
Lots of mugs of tea! Almond butter, raw carrot cake and homemade guacamole!

What can your fans expect from you in the coming months?
We will be coming back soon to India to film some more adventures with Indian superstars. I can’t wait. And I also am hoping to return to attend a rally and support the incredible Indian Scouts who are inspiring so many millions of young people to learn about the wild and adventure. Scouting also helps young people learn so many key life skills. I love that, and it is part of why there has been such phenomenal growth in Indian Scouting in recent years.

FACT FILE
• Bear Grylls started his career in the British Special Forces in 1994. But three years later, a skydiving accident, saw his military career being cut short.
• He has authored numerous books, such as Facing Up, which chronicles his climb to the summit of Mount Everest, his autobiography Mud, Sweat and Tears: The Autobiography, and Ghost Flight, a thriller novel.
• Apart from Narendra Modi, Rajinikanth and Akshay Kumar, Grylls has filmed shows with everyone from Barack Obama and Michael B Jordan to Channing Tatum, Kate Winslet and Cara Delevingne.
• In 2019, he was awarded the OBE by Queen Elizabeth. The OBE or The Most Excellent Order of the British Empire is an order of chivalry that rewards people for their contribution to society.