COVER STORY: Adarsh Gourav pulls back the curtain on his transition to Balram Halwai in The White Tiger

The last few weeks saw every cinephile talking about one man — Adarsh Gourav, who has taken everyone by surprise with his performance as Balram Halwai in The White Tiger, a film by Ramin Bahrani based on Aravind Adiga’s novel of the same name.

The film sees 26-year-old Jamdeshpur-born and Mumbai-bred Gourav getting into the skin of his character Balram and portraying all his shades with an ease that has left everyone marvelling at his craft, and him winning a nomination for Independent Spirit Awards in the Best Male Lead category. First seen in the film My Name Is Khan (2009), where he played a young Shahrukh Khan, the actor has indeed come a long way. In an interview with Indulge, the actor talks about the process of bringing Balram Halwai to life, while recounting his journey so far, his dream and preparations to work with the best directors of Hollywood and Indian cinema. Excerpts:

Q: How has it been since the release of The White Tiger?
It has been very overwhelming! I hadn’t expected the film to be received this way. While Ramin did appreciate my work, I thought every director tells his actors that they are good to encourage them to continue to put in effort and work hard, just like parents tell their child that they are special. But now that everybody has been saying it, I think he was being honest (laughs). On a serious note, when you are working, you are deeply engrossed in the project and you lose objectivity as an actor. Apart from acting, you even spend many days dubbing it so you don’t know how the final product actually looks and if it is good or not, so everything that is coming my way is a surprise.

Q: How did you land this role? And, how were the months leading up to it?
I wrapped up Deepa Mehta’s Leila in December 2018, and honestly, for the next six months, there was nothing except one commercial. I even reached out to friends asking for voiceover gigs but there weren’t any. It was in May that I gave a few auditions and surprisingly, all of them materialised. I was really excited about one of those projects and it even needed me to prepare for it but before I could go ahead with it, I received a call from Tess Joseph Casting (Mumbai-based casting director who has worked on projects on Extraction, Life of Pi, Lion and The Namesake) for The White Tiger. I was in two minds. While a part of me wanted to do what I already had in hand, another part wanted to give a really good audition and impress Tess. In my head, I thought, ‘The White Tiger was too huge and there was no way that I will get to play the central character. But, let me make the most of this opportunity and impress Tess so that she can cast me later for any other project.’(smiles) However, it worked out.

Q: The way you got into the skin of Balram Halwai is commendable. How did you get it right?
As an actor, I really like to live my character before I play them, and since I had the luxury of time here, I decided to explore the life of my character. I befriended a person who lived nearby and asked him to take me to his village. Thankfully, he agreed. We took several modes of transportation and reached his village, Chalkari Basti, in Jharkhand’s Bokaro district. I had even requested my costume director to send over some clothes that Balram would wear in the film so that I would not stand out. I had also asked my friend not to tell anyone about the purpose of my visit, so that I could have an undiluted experience. I spent about 10 to12 days there, and every day, we would take his bike and go to the various places where he grew up. It gave me deep insight into how people in the village are, and what and how they think. From there, I went to Delhi and started looking for a job at roadside stalls. This took me a while since everybody asked for an ID card and by then I had started introducing myself as Balram. Plus, I had started to look like Balram. I eventually found a poori-sabji stall that didn’t care about the ID card and gave me a job with a daily wage of Rs 100. I worked 10 hours daily for about two weeks.

Q: What were the challenges of becoming Balram? Was there pressure to do justice to the character and his world without making it caricaturish?
It was very challenging to be Balram for 60 to 65 days because somewhere subconsciously you are aware that this is not who you are. I would try to think and feel like him as much as possible, but deep down, I had that awareness, and it demanded a lot of patience and discipline to stay in character for such a long period. Honestly, I was very fortunate to work with a genius like Ramin. The day I was signed on, he told me, ‘This character exists on paper and in the book. But you have to find your own truth — Who are you as Balram?’ So, he really let me explore myself completely and be my version of Balram.

Interestingly, Ramin would never say ‘action or cut.’ Instead, he would say, ‘Whenever you are ready’ and he would let things come organically to us. And, even if the scene ended on paper, you could continue improvising till you saw Ramin walking in to the frame. Things like that made it easy and organic for me.

Q: You are a trained classical singer and there is a scene where you sing, was that your voice?
Yes, it was me. It was an improvisation, actually. The scene actually ends with RajKummar singing a song but in one of the first takes, I sang a song from a Hindi film and then Ramin asked me to create something on my own. So, I reached out to one of the guys in our production team who is a very good writer and he wrote those lines. I composed them then and there and sang it. The part where I say my dadi taught me music was also an improvisation. With Ramin, you get plenty of opportunities to improvise and go off-script. In fact, he encouraged us to do that.

Q: How was it working with Priyanka Chopra Jonas and Rajkummar Rao?
It was surreal to be working with them. I am a huge fan of their body of work and they have influenced me to be an actor. All of us know that they are fabulous actors, but I feel lucky to be able to work with them and know them in person, for the people they are — they are the nicest and warmest people, and not once did I feel that I was working with stars. They are as hungry to perform as they were on their first day of the job and that’s the biggest learning for someone like me who is just starting out. You have to be as hungry as the day you begin if you want to continue playing good parts for decades.

Q: What does the nomination for Best Male Lead at the Film Independent Spirit Awards mean to you?
It is overwhelming to see your name next to people like Riz Ahmed (Sound of Metal) and Chadwick Boseman (Black Bottom). One moment you are seeing these guys on Netflix screens and the next, you see your name alongside theirs. But, apart from attention and trophies, the point of nominations is hoping that the filmmakers you grew up watching will take note of your work and might consider you for a role in their projects, and I hope it translates into work. Q: Did the lockdown give you time to go back to music and what’s happening with your band, Oak Island?
My band has not been active, since we have all been busy with our lives. But of course, we speak and hang out. I have taught myself guitar during the lockdown so that I don’t have to depend on anyone. I learnt it from YouTube. As of now, I sing for myself, I sing for people when they ask me to and I would gladly sing for movies if given an opportunity. I hope I do playback someday because I started out as a playback singer.

Q: You have worked with some of the finest and biggest names in the industry — Sridevi in Mom and Manoj Bajpayee in Rukh and yet it took a while before this recognition came your way. How did you stay patient all this while?
It is very natural to be upset and of course, I get upset. But I consciously try to manage my expectations. Also, you get used to it, with time it gets becomes a part of you. As an actor, you see much more failure than success, at least in the beginning. What I have learnt is that you need to keep yourself busy and remind yourself why you are doing what you are doing. I have a four- to five-hour routine that keeps me busy even on days that I am not working.

Q: Take us through your routine.
I exercise, I do my vocal riyaz, I practice guitar for some time, I am working on my American accent and learning Tamil so some time goes into that. Plus, if I am reading a book, I read it for 30 to 45 minutes and then I read some parts of it aloud for a while. If there is a scene that I came across while watching a film or if I am reading a play, I will read the scene aloud. These things are essential to me. 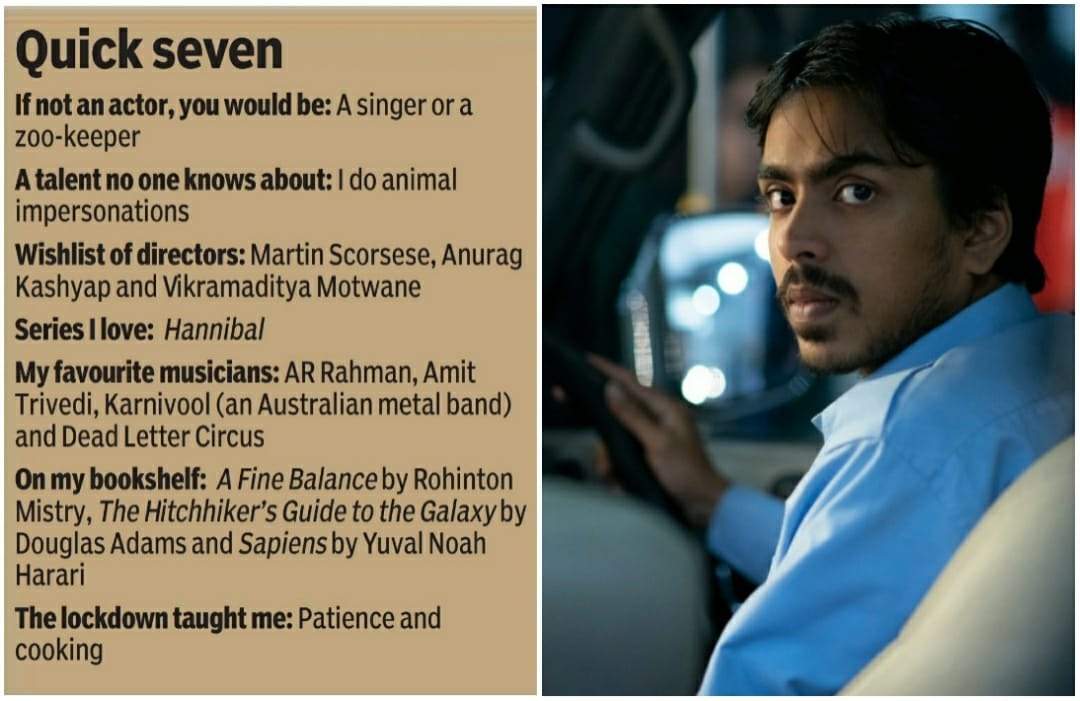 Q: What’s next?
I have just finished shooting for Varun Grover’s short film. I can’t talk much about it. Apart from that, I have definitely been getting calls for auditions and people have been sending scripts but I haven’t signed anything yet. I am taking it slow and looking for something that really, really interests me. Right now, since I have that opportunity to decide, I want to make the most of it.