Lockdown diary: All the social media stars who are keeping us entertained from home

We all have our ways of coping with the quarantine, but some people are living out their isolation in productivity as they are also helping others by making out timelines interesting. Since you’ve got a whole lot of time on your own hands, and hopefully no work, you check out these viral sensations who are using comedy, music, relevant life hacks to make this time a little easier for others and also going viral while they are at it:

This 24-year-old Dubai girl has danced her way to her fan’s heart. If you are on social media chances are you have seen Nidhi Kumar shaking her hips to popular Bolly numbers. Touching over 50 million views on YouTube, the Mumbai-based artiste’s acts are not restricted to just the video app. She operates in three other applications as well and that includes Instagram, Snapchat and TikTok. Nidhi who believes that consistency is the key to success is supported by Qyuki, a creator-focussed company that manages digital stars. She says, “I make new content every single day since I have four different platforms and four different audiences to entertain. Since I am at home now all the time, I post twice or thrice on Instagram as opposed to one post a day.”

Always striving to inspire and pave the way for the youth in the UAE to make a full-time career in Performing Arts, Nidhi is also an actor, TV Presenter, Social Media Influencer and model and has hosted her TV shows apart from doing commercials for brands.

What keeps her motivated? “I can’t think of a day without dancing and sharing it with the world. The biggest factor that keeps me motivated even on my low days is my audience who religiously wait for my content,” says Nidhi who has been entertaining for the last 3 and half years.

Suresh Mukund’s choreography is passion-driven. The Mumbai-based choreographer creates a hypnotic effect whenever he is seen on the small screen with his dance group Kings United India popularly known as The Kings. “We have been doing this for our passion and all the talented dance aspirants in India and around the world,” says 33-year-old Suresh whose other co-founded group Fictitious Dance Group became the first Indian squad to win a medal at the World Hip Hop Dance Championship held in San Diego, California.

They gained worldwide fame after they won Season 3 of NBC's World of Dance in 2019 in Los Angeles, California. Suresh usually makes more than 10 dance videos every month and informs us that though the production has increased tremendously in the past year, the lockdown has slowed them down due to lack of resources. But who is stopping them? Their goal remains the same – to keep their fans entertained and needless to say you can find fresh content soon.

Sameeksha Sud, Vishal Pandey and Bhavin Bhanushali form Teentigada, the popular trio who are making waves on TikTok. With their funny and relatable videos, they build an impressive fan base that counts in millions. On Instagram, you can find more than five fan page of the talented group. Interestingly, they all started individually and later formed the group after a chance meeting in 2019. And voila! their first video on YouTube got them 3.5 million views. 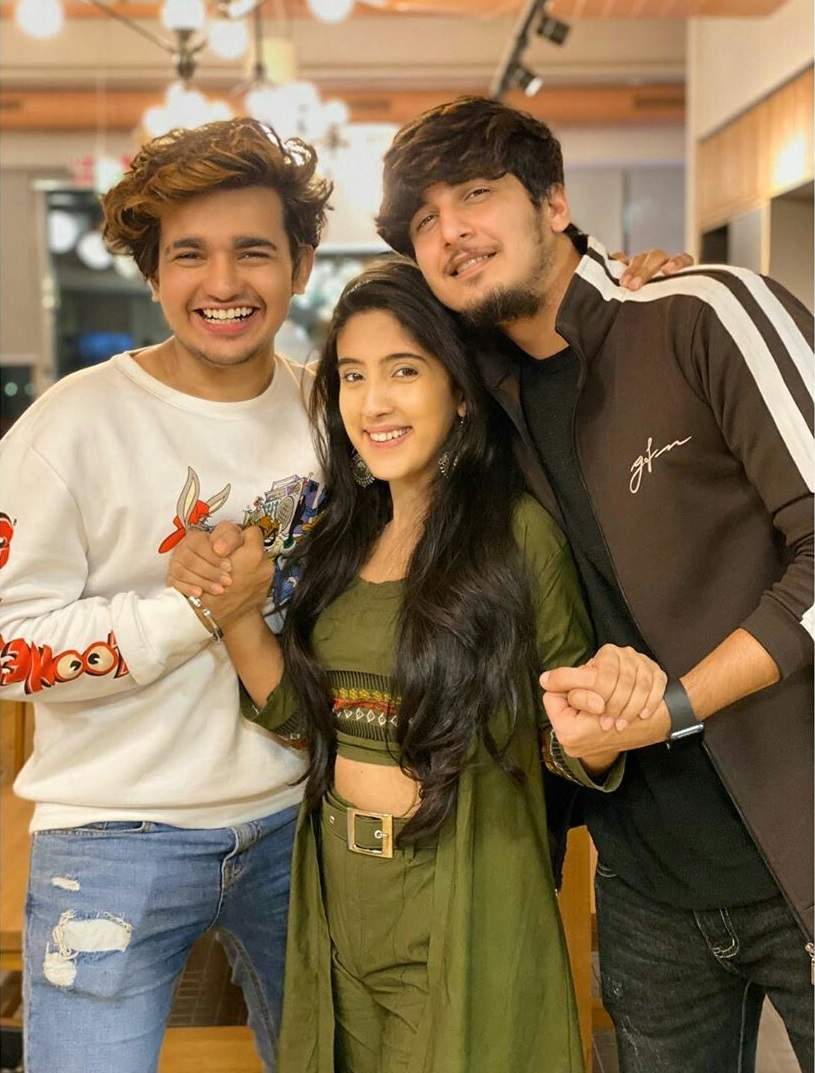 “We keep on brainstorming to make our videos relatable with the youth with subjects that interests them and Qyuki privides a huge backing,” says 24-year-old Bhavin who has also acted in TV series and informs us that they get hundreds of messages from their fans daily. You will find catchy short videos spanning a few seconds with themes of everyday issue with dating couples and friends. Their world has expanded beyond short videos and they are also seen in music videos.

Faisu, Adnaan, Hasnain, Faiz and Shadaan bring in their swag coupled with good looks and absorbing content on the screen and their fans love them to the core. Known as Team 07 it is one of the most popular groups of digital influencers on TikTok and Instagram. The real-life friends who have 395k followers on Instagram are making the most of the situation and producing short videos on the pandemic.

“Since COVID-19 has confined us to our homes and scaring everyone with growing cases, we wanted to create videos that would give out a positive message to our fans,” says Faisal Sheikh popularly known as Faisu whose personal Instagram account has 11 million followers and who started his journey with dubsmash. He is also seen in a newly released music video Airplane opposite Zeenat Zubair. With 348.7 k followers on TikTok, their current content not just takes a dig at the pandemic but also create awareness.

Sawan Dutta who’s better known as Bengali Aunty saw a huge surge in popularity last year, when her hysterical but timely musical videos went viral from her YouTube channel called The Metronome. Dutta sings her song in a typical Bong-lish accent we hear around Kolkata so often. But in the last few weeks she’s really upped her game with her Coronavirus themed videos where she shows people how to keep Corona at bay, and is aimed at Bengali hypochondriacs. Her vlogs usually follow a storytelling pattern, and since some of her videos are made on request by her fans, they turn out to be really relevant.

“Bengali Aunty has been a bit agitated of late because the deadly virus which was knocking at the door a couple of weeks ago, seems to have arrived. And it has reached the Bengalis! We need a song about social distancing and quarantine. She doesn’t have a balcony but he does have access to pots and pans!,” Sawan says right before she starts to sing in her self-quarantine video. But one of her biggest hits is the Coronavirus Safety song where Bengali aunty shows us the right way to wash hands. “Six days ago, a medical practitioner friend requested Bengali Aunty to create a song from the Handwashing Guidelines from the US Govt. Centers for Disease Control and Prevention, which are being circulated as a preventive measure for the dreaded COVID 19. So here we are, with what's probably the fastest song vlog created at The Metronome till date,” she says.

Mumbai-based music producer Sanaya Ardheshir who goes by the moniker Sandunes is famous for blending piano and keyboard movements with progressive electronica; but to keep herself busy amid the lockdown she has been using humour to mix quirky videos. For instance, she made a DIY music flip video of the ‘Go Corona’ chant which took social media by storm recently. In the past too, Sanaya has used her MIDI controller to create hysterical flip videos, one of which was a musical montage of Donald Trump’s Ahmedabad speech. But Sanaya also opened up on Instagram about the anxieties which come with living in an uncertain lockdown.

“What a weird friggin time to be alive. I’ve been anxious over the last couple of days mostly because of loved ones about to get on long haul flights and not knowing if they’d make it back home before more travel bans came up.. family members in far away countries are now on total lock-down and curfew..not to mention every gig, workshop and event - cancelled,” she said on Instagram.

The artiste is also offering online Skype sessions to those who want to stay close to their  creative projects; this is also part of her effort to bring the community of artistes and creators closer through their work. "In an effort to feel like I’m adding value, I’m offering my time to help you stay close to your creative practice. I’m offering up Skype sessions to help mentor your next/current creative project. This is something I was going to embark on later in the year as a part of my workshops, but now just seems like a more fitting time," she wrote.

Delhi-based beauty influencer Shreya Jain is doling out major self-love hacks which are going viral for obvious reasons. Since we’re all stuck at home with nowhere to go, it’s a great time to give in to our beauty rituals. Jain revealed on Instagram that she wants to help out her quarantined fans with beauty tutorials; her latest online makeup class has her showing us how to fix basic makeup errors. She’s already busting a lot of myths for us! Did you know you shouldn’t apply makeup on freshly applied skincare? We sure didn’t.

“When you put on makeup on freshly applied skin care, it slips and slides and never stays on. It’s always wise to wait for 30 seconds,” she reveals on YouTube. Her recently uploaded base makeup blunder tutorial has already acquired more than 45,000 views in just two days! But to save us from going on a splurging spree after our quarantine ends Jain also came up with funny anti-haul vlog which actually talks about the kinds of makeup we shouldn’t really be splurging on. The YouTuber is also using Instagram for really helpful styling and makeup tricks, which you can experiment at home. Jain insists that we could all use our time at home to master our skincare rituals and go-to makeup routine.

YouTuber Prajakta Koli’s self quarantine diaries have been helping us get through our indoor time and it can actually help you be productive too. If you’re working from home and it’s taking some getting used to, Prajakta’s hysterical video can be a total lifesaver. She addresses everything from in-team conference calls, to useless procrastination, to Internet troubles. She also made another really helpful vlog titled Things You Can Do In Self Quarantine, where she lists out how we can spend our time! One of her first tips? Get back in touch with friends!

“I have missed so many calls from friends because I keep busy and my memory is that of a goldfish.  I forget to return calls, reply to messages! Now I’m taking this call to video call everybody! This is also a nice way to find out who’s really interested to stay in touch. But Prajakta has also taken to Instagram to chronicle what exactly she’s doing at home, and it’s a varied list. “#Day5 of self quarantine: Eavesdropped on our downstairs neighbour’s phone call fight with Aarti. I think Aarti is quite the b*tch,” she wrote on Instagram a few days back. “Day 8 of #SelfQuarantine : Tried matching my left eyeliner to my right eyeliner. ALMOST got it right!” Prajakta wrote along with a DIY eyeliner video.