At the four-day art exhibition being hosted at the Kasturi Srinivas Art Gallery, attention will be on the work of 23 artists, each belonging to different schools of expression, showcasing art on themes that offer personal insights into the political, cultural and social landscape of their respective regions. Organised by the art collective called Pintorus, the exhibition titled Sankalan (translated as aggregation) aims at providing artists from across the country (and two from Nepal) a platform, while informing audiences that art can be a point of integration of various cultures. “Art has no boundaries. Incorporating artists from across the country into the collective allows for an exploration of their tradition and cultures, besides a greater understanding of individual style and choice of medium of work,” explains Justin George, member of Pintorus. 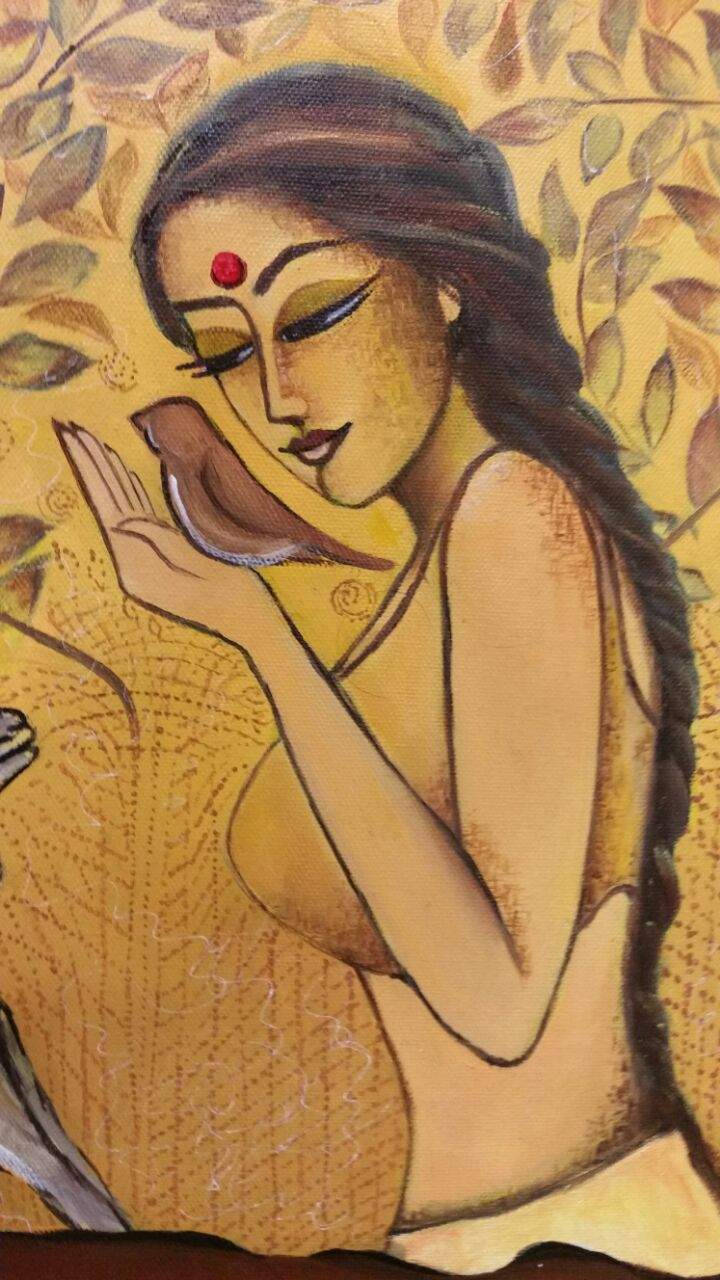 Man & nature
Among the artists from Karnataka is Latha Kruthi whose theme is on human interaction with nature. Depicting her subject as a woman amidst a pastoral setting, the artist looks to spotlight the unmatched purity and genuineness that can only be found in nature. “On a basic instinctual level, we are all looking for love. And this is seen as a bond between mother and child or a relationship between lovers. But my experience with nature is something that has been unparalleled,” says the artist. Describing her style as contemporary, the Bengaluru-based Latha, works with oil and acrylics. Finding her nirvana through the meditative medium of art, Latha will be showcasing six paintings, four from her nature series, while the other two are abstract. In the abstract
Job P K, an artist in Kochi is a prime example of the variety of experiences, the exhibition tries to curate. Having worked in the media as a designer, illustrator and political cartoonist for over a decade, the 42-year-old tells us that he started painting at the age of six and began working as a designer as early as 18. Working on canvas with acrylic, the artist who is currently pursuing his BFA through distance education at KSOU, Karnataka will showcase three of his paintings on the themes life, Sanjayanam (a Hindu funeral rite) and sky. “The three paintings explore forms and colours through abstraction. Through Sanjayanam, I explore the relationship between the crow and a corpse after cremation. The inspiration for this painting comes from a 16th Century Hindu ritual,” he shares. In another painting titled Life, Job highlights the grind of daily life,  interspersed with imagery of yoga and sex through geometric abstraction. 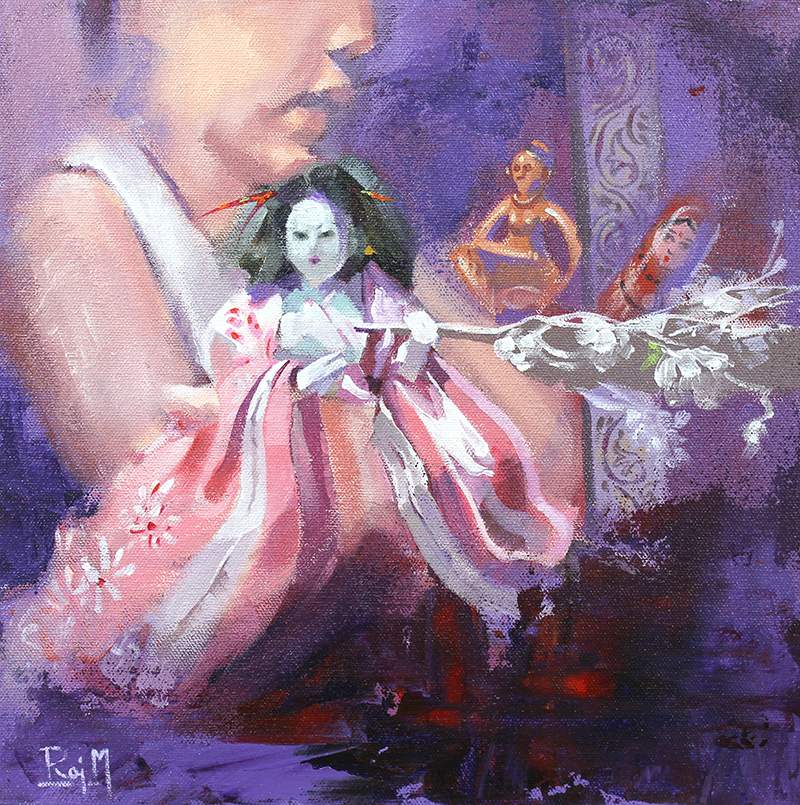 Thanks for the memories
Focusing on their childhood are two artists who are currently based in New Delhi. Four of Raj Kumar Maji’s paintings looks at the relationship between a boy and his doll. In his series titled Me and My Japanese Doll, that was previously showcased at the Lalit Kala Akademy in New Delhi, the 35-year-old uses figurative abstraction to understand the deep bond that a child shares with his toy. Also, making it’s making its public debut will be the artist’s Indian Rasa series, which is hinged on the theme of Vasanth (Spring). It makes use of water colours, acrylic and oil and features a limited colour palette, with shades of blue dominating the paintings On display will also be the Raj’s individualistic take on the Ragamala paintings. “My paintings are characterised by the contrast of the colours. I equate colours to sounds, some of them are in whispers, while some are loud.” 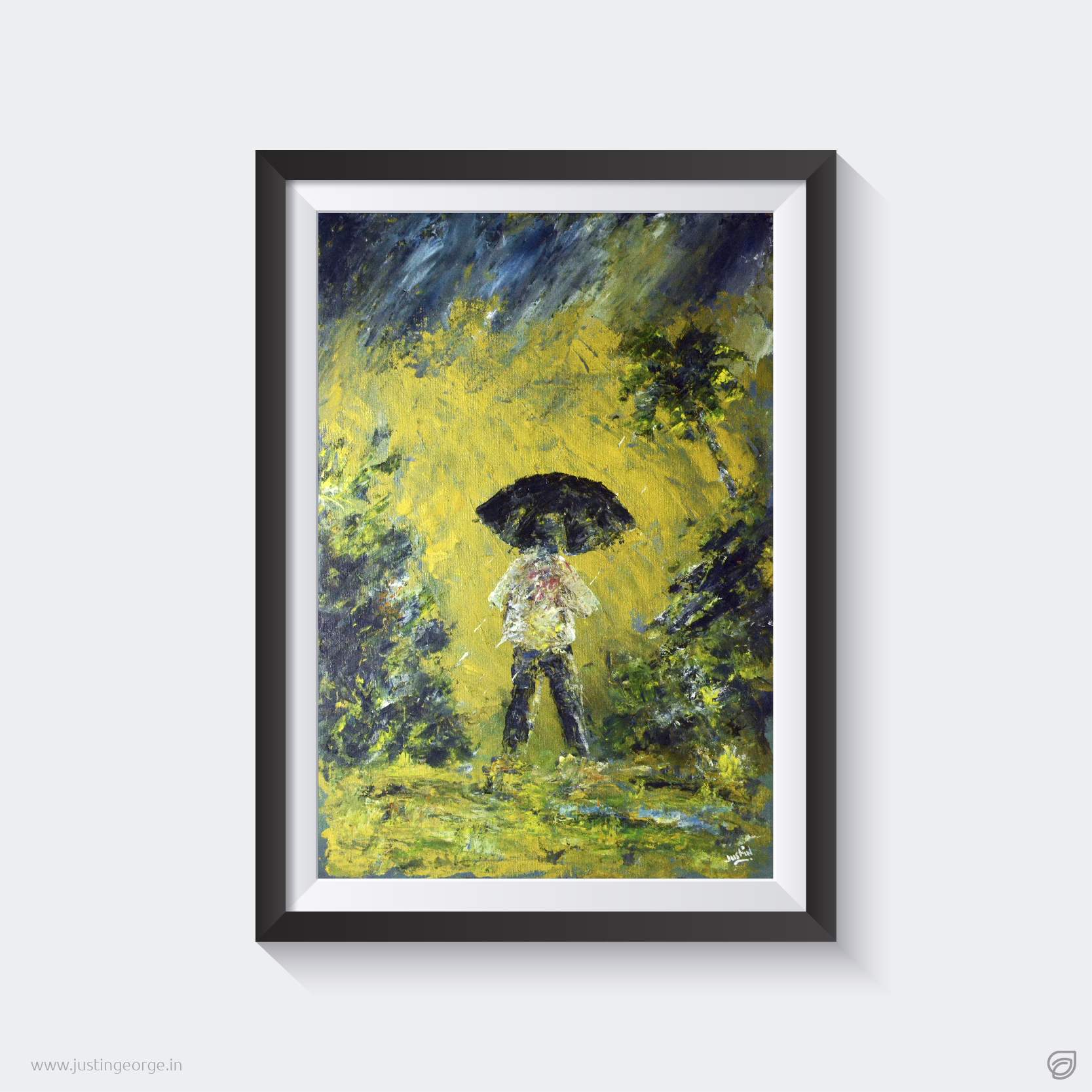 Delving into his memories through a mixed style of abstraction, realism and naturalism is Justin George. Exhibiting in Coimbatore for the second time since 2016, the Kasargod-born artist will be putting up three paintings on display. “My paintings are usually a gateway into my emotions and these emotions dictate the style of the artwork.” Frozen in time as snippets of his childhood, on display are lonely roads through the woods and a person bearing a yellow umbrella walking alone in the rain.