Stories from beyond the wall: St+art India is transforming Coimbatore's public spaces with street art

The common problem with stereotypes is not that they are wrong, but that they tend to be singular in their perspective. Up until recently, street and graffiti art was thought of as acts of vandalism and rebellion that diminished the appearance of a city. Well, at least up until the world was suddenly jolted into awareness by Banksy and his Baloon Girl last month. But closer home collectives like St+art India are working in tandem with city bodies to prove that street art can be used to create new visual identities while also acting as commentators of empowerment and culture, and not subversion. “St+art India began as a means of taking art out of conventional spaces, of breaking down socio-cultural barriers and acknowledging the unseen artists who had shared their experiences in a public space,” begins Karan Kaul, assistant curator, who is in the city as a part of their St+art Kovai Project.

A five-building initiative, this not-for-profit collective that is supported by Asian Paints was invited by the Coimbatore Municipal Corporation to revamp city spaces within the context of creating an urban art project. Zeroing in on the most pedestrian-friendly areas in the city with the highest concentration of street hawkers and urban dwellers — The Police Commissioner’s Office, Ex-Servicemen’s Building, The Cancer Ward at CMC, St Francis Anglo-Indian Girls School and District Library—St+art enlisted five artist collectives from across the subcontinent including Nepal to kick-start their Coimbatore initiative.

Strolling through these lanes that use array of street-art styles—from lettering fonts to murals—in bright, vibrant colours, we speak to the creators about their projects in the city and the importance of art in public spaces. Mythical majesty
Working on a piece that is representative of architecture, fashion and mythology, the mural by Nasto Mhoha was inspired by the humble plastic wire koodai (basket) of Tamil Nadu. “The mural showcases a woman who is dressed in a Kanjeevaram sari and adorned with Bharatanatyam jewellery holding a yali that she’s taken out from her koodai,” shares Abhik Payyapilly, co-founder of the collective Nasto Mhoha. Indicative of powerplay through the depiction of the mythological yali (mainly associated with ferociousness and strength) sitting in the hands of the woman, the idea of women’s empowerment resonates through this surreal mural. Having used a vibrant pastel colour palette, this work of art that graces the wall of the Ex-Servicemen’s Centre, was the brainchild of Riji Cherian Philip, Namratha Medappa along with Abhik. Fruit of the loom
Kiran Maharjan’s work has been a continuing engagement of an amalgamation of photo-realism with colourful abstractions. It is the idea of contradictions and contrasts within the same space that define the aesthetics of this Kathmandu-born artist. Merging his characteristic style with the time-cherished tale of the city’s textile history, Kiran’s mural on the wall of the Cancer Ward at CMC points out the transition of the cotton crop that went from being a symbol of British colonialism and exploitation to becoming a self-sustaining industry in the city. “The mural depicts the significance of the working class. The image is a homage to farmers and cotton pickers,” shares the artist who has showcased at the Cambodia Street Art Festival and Serendipity Art Festival among others. Handpainted over a period of nine days, the mural makes use of the scriptural Ranjana Lipi alongside Tamil calligraphy to form the phrase ‘Laud the plough’, while the hands of the cotton picker are painted to depict quarter to seven on a clock face—representative of the year of independence, 1947. 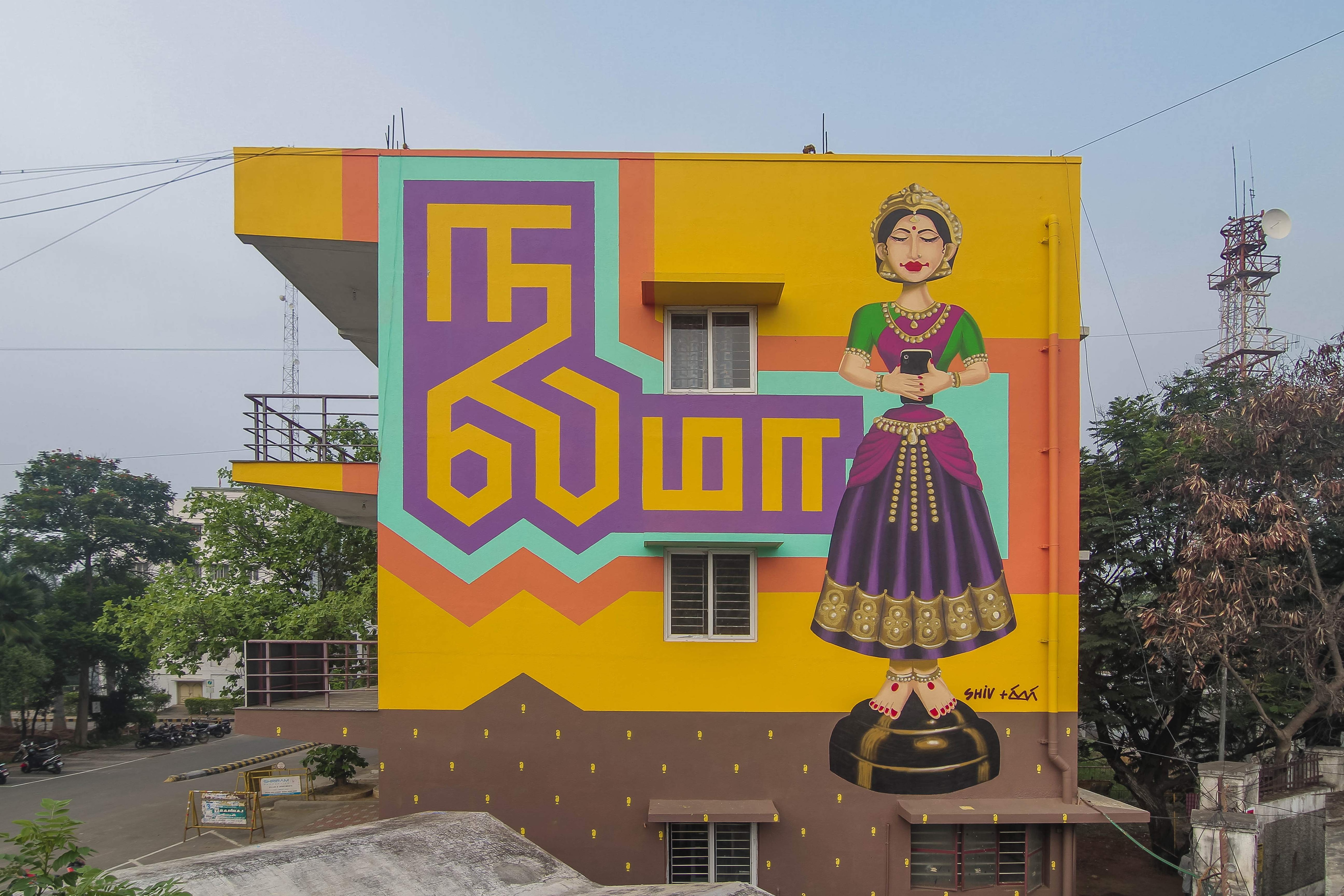 All dolled up
The Thanjavur doll has come to represent an idea that is unequivocally Tamilian. However, artist Shiv Kumar Akula tells us that the idea for their mural was an afterthought, only once he and fellow artist Ranganadh Komari had created sketches on themes like Jallikattu and traditional Tamil Nadu jewellery. “The Thalayattibommai represents the cultural heritage of Tamil Nadu. Our mural attempts to communicate the idea of tradition while keeping things contemporary,” shares Shiv. A play on this dichotomy, the Thanjavur doll is seen in its traditional garb, but instead of striking a signature mudra, the doll is seen holding a smartphone. “This piece reflects upon how, though the city is steeped in culture, it’s heading into the future as a contemporary city,” he adds. Their second project under St+art India, the artwork that is on the Police Commissioner’s Office also uses an element of graphic text in Tamil which says, “Nalama”, translating to, “Is everything all right?” 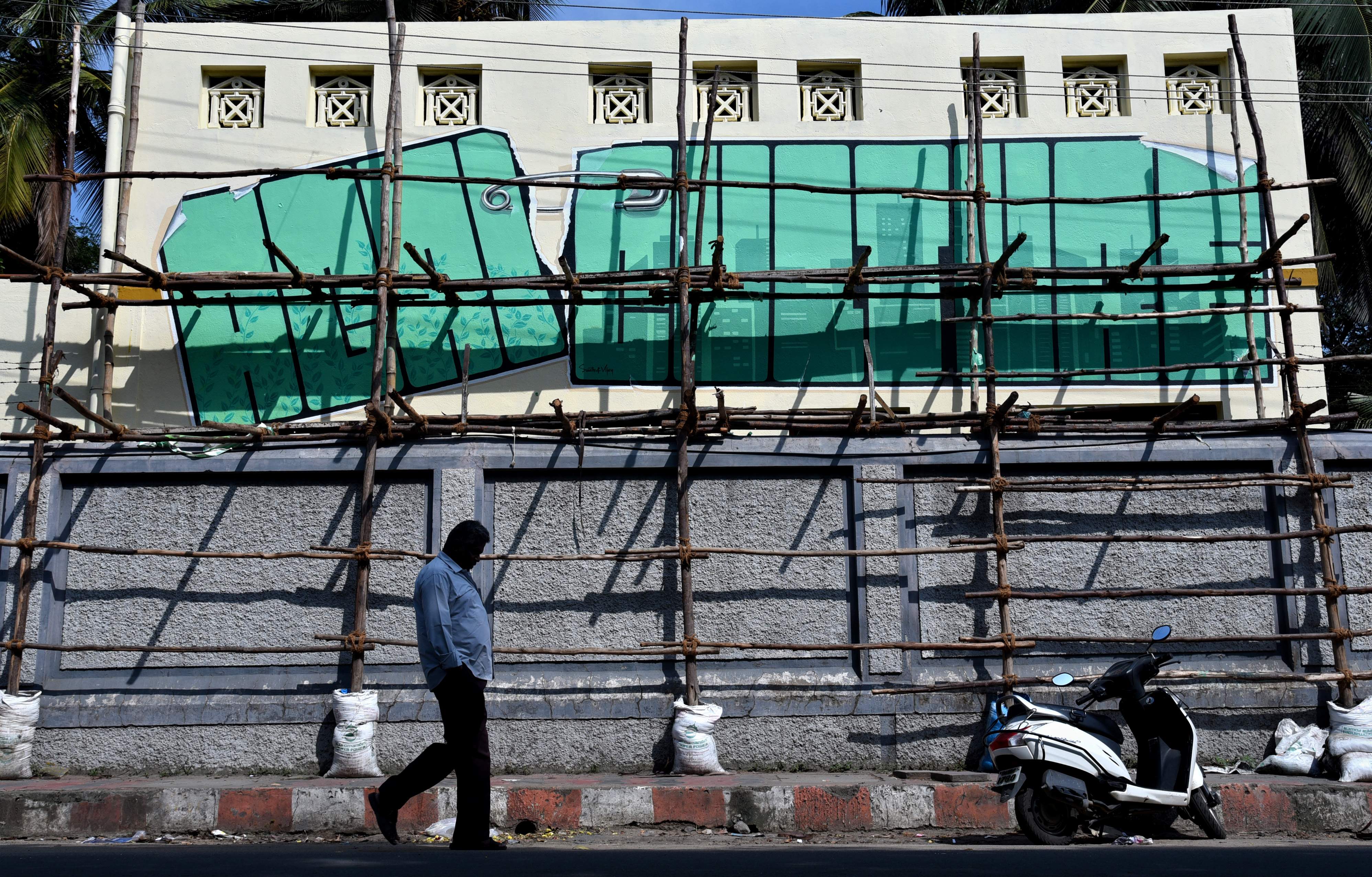 Grass roots
Artist couple Swathi-Vijay have been transforming government school buildings across Telangana with their artwork since 2015. So, it should come as little surprise that their mural finds its place on the wall of the St Francis” school. “We have always used our artwork to focus on social issues,” says Swathi. An image that reads Agri-Culture and is dependent on Typography as its main style, this mural acknowledges a disconnect of the urban with its agrarian roots. “The words ‘agri’ and ‘culture’ have been split and our art looks at bridging the gap in the painting.” Handpainted over a period of seven days, this mural will be the artists’ third venture with St+art India. Face value
For the largest mural in the city, Bengaluru-based artists Poornima Sukumar and Sadhna Prasad came together to create St+art’s landmark project at the city’s 75-foot District Library. Converting the entire building into a canvas, the mural that is still under way, is a tribute to the people of the city in their
elements. “Since the library lies in the heart of Coimbatore, where there is so much commercial activity, we figured that this mural should represent our interpretation of the city,” explains Sadhna, founder of the Aravani Art Foundation. The 16-day project, that is currently half complete, also pools in members from the Aravani Foundation—a project to integrate the transgender community into society through public art. Featuring patterns from Kovai kora saris and veshtis, this mural makes use of geometric patterns, a warm colour palette and sports the text “Indru Namadhai”, which means ‘Today is ours!’