25 years of Christie's: Highlights of New York auction set to be previewed in Mumbai

Mumbai / New York: On 11 September, Christie’s New York will be holding its third auction of South Asian Modern + Contemporary Art for 2019, a year which marks the 25th anniversary of opening its first representative office in Mumbai and 24th year of holding standalone auctions of 20th Century Indian Art.

The year for South Asian Modern + Contemporary Art at Christie’s will be closing in November in Hong Kong, where the department’s participation in Christie’s autumn auction season was reinstated a year ago.

Highlights of the New York auction will be on view at a preview exhibition in Mumbai for three days, from 22-24 August, open to the public with continuous guided tours given by Christie’s specialists.

For the past two decades, Christie’s has led the market for South Asian Modern + Contemporary Art with a commanding 70% market share in 2018.

Eight of the top ten auction prices in the category have been achieved at Christie’s. The exceptional growth in this field is best exemplified by our sale results.

Sell through rates in New York achieved over 90% by lot in March 2019, and a year earlier the New York sale established the highest price for the category when Tapovan by Syed Haider Raza sold for $4.45 million.

Christie’s India is pleased to celebrate its 25thyear in the country, a presence which began in 1994 when the firm opened the first representative office of any international auction house in India, in Mumbai.

The establishment of a specialist department in India, London and New York followed, with the first stand-alone 20th Century Indian Art sale held in London in 1995.

It took another 10 years of strong auction results until the first $1 million lot was knocked-down, when Tyeb Mehta’s Mahisasura, painted in 1997, sold for $1,584,000.

In 2013, Christie’s brought its auction knowledge to India, by holding its first sale in Mumbai.

“25 years ago, Christie’s was the first international auction house to open a permanent office in India. Over this quarter-century, the perception, recognition and admiration for this category has grown internationally with the help of major retrospectives and exhibitions of works by Indian Masters, alongside local initiatives, such as the India Art Fair, the Kochi-Muziris Biennale and the Serendipity Arts Festival," commented Sonal Singh, Senior Specialist and Managing Director of Christie’s India.

"24 years of holding auctions in the category has allowed Christie’s to establish a robust international platform for South Asian Art, from the modern masters to contemporary artists, and we will continue to build on these successes,” she said.

NEW YORK SALE HIGHLIGHTS
To be offered on 11 September 2019, previewed in Mumbai 22-24 August

Christie’s sale of South Asian Modern + Contemporary Art presents over 110 works by modern and contemporary artists from the Indian Subcontinent.

Leading the sale are important works by Syed Haider Raza, Francis Newton Souza and Bikash Bhattacharjee along with an impressive selection by contemporary artists including a sculpture by Mrinalini Mukherjee, whose work is currently on view in a dedicated exhibition at the Met Breuer in New York.

Syed Haider Raza (1922-2016) left India for France in 1949, after receiving a scholarship from the French Government to attend the École NationaleSupérieure des Beaux-Arts.

It was in Paris that Raza finally encountered the work of artists like Matisse, Cézanne and Gauguin in person, and where his body of work underwent its first dramatic transformation.

He was influenced both by the palette and compositions of the Post-Impressionist paintings. In addition to abandoning watercolour and gouache for thicker and more tactile paint, the artist began to rely more on colour and texture to evoke his experience of the landscape.

A rare cityscape, this 1956 painting is one of the few that records Raza’s impressions of the vibrant and teeming metropolis rather than of the villages in the French countryside.

Most likely a view from the artist’s first studio in Paris, a modest attic on Rue de Fossés St Jacques, this work employs dark ink outlines over oil to portray the artist’s view of Parisian rooftops, on what appears a cold and overcast winter morning (estimate: $350,000-400,000). 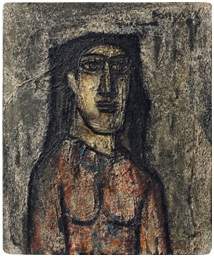 Born in Goa, Francis Newton Souza (1924-2002) moved to London in 1949, remaining there for almost two decades until he moved to New York, where he lived for the rest of his life.

From 1949 until his first solo show with Gallery One in 1955, the artist struggled to find an audience for his work in the UK Painted in 1952, this solemn portrait of an unidentified woman borrows from several artistic traditions, Eastern and Western, traditional and modern, laying emphasis on the artist’s broad and complex iconographic horizon.

Unlike the female figures that soon began to populate Souza’s oeuvre, the subject of this painting is neither hyper-sexualized or grotesquely disfigured. Instead, the artist has painted a meditative portrait of a conservatively dressed woman, who seems to almost be sculpted out of the heavily textured paint.

Her habit or veil-like headdress and tranquil expression suggest piety, perhaps indicating that she is part of some religious order or sect (estimate: $180,000-250,000).

Raised a Roman Catholic in Goa, Souza’s early work reflects his initial enthrallment with the various facets and traditions of the Church and its representatives, from the imposing architecture to the vestments of its priests and the implements they used in worship.

Although this fascination would soon turn into a repudiation of the faith, it nevertheless influenced Souza’s work in every genre over the course of his long career, including portraits, landscapes and still life paintings. 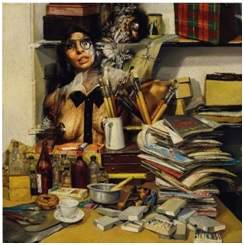 Following from a series of surrealist mixed media collages and animalistic portraits that the artist executed in the late 1960s, this masterful painting from 1970 titled The Visitors represents one of Bikash Bhattacharjee’s most accomplished compositions in oil, perfectly straddling the realms of reality and fantasy.

On closer inspection of this photorealist, finely detailed scene from the artist’s studio, the viewer is confounded by the apparition of a beautiful woman wearing a sheer blouse and diamond earrings.

The odd angle of her head and surprised expression lead the viewer’s gaze to the head and shoulders of a bespectacled male rendered in shades of grey, slightly overlapping hers.

Finally, behind this phantom figure is a third head, also male with dark-rimmed glasses, but this time separated from its bare torso with a suggestively placed pair of scissors hanging from the shelf on which it sits. While the two male figures bear a degree of resemblance to the artist, their female companion is a more unusual visitor to his studio.

This painting represents the zenith of an extraordinarily creative period in the artist’s career, which led to two consecutive National Awards in 1971 and 72. (estimate: $40,000-60,000).

The painting is part of the renowned Dorothy and Richard Sherwood Collection, formed by an American couple who devoted their time, prodigious energy and resources to help build some of the leading cultural institutions in Southern California, including the Los Angeles County Museum of Art and the Center Theatre Group.

The auction will also offer about 20 modern and contemporary works of art donated by artists, galleries and collectors to support the Library of Bengali Literature, published by Columbia University Press.

The idea is to edit an open-ended bilingual collection of 1000 years of the texts of Bengal, a territory located around the Bay of Bengal and Calcutta situated between Bangladesh and West Bengal in India.

The project is similar to the Loeb Classical Library, started in 1911 at Harvard University Press, which now has more than 500 entries devoted to preserving the writings of Greek and Latin antiquity.

The editors have established a working list of fifty volumes, but in fact, this is project is to be seen as open-ended and entries will be welcomed from all sources, on all kind of subjects and researched as well as edited to the highest standards of the Columbia University Press.

The first two volumes are ready to be published as soon as funds are secured.

Columbia University Press is raising an endowment of $2 million to support the project and we hope to raise part of this endowment through this auction. For more information about the project please visit the Library of Bengali Literature section on the official 'cup.columbia.edu' website.