Osian's - Connoisseurs of Art are set to present their Inaugural Live Auction & Catalogue for Vintage & Classic Automobiles scheduled for 27th February 2019, with the Opening Auction Preview on Friday 15th February 2019.

"We hope you will enjoy this automotive feast, as the best of engineering and design, speed and cool, heritage and functionality, combine to open up a new transparent market for Historical Vehicles. With more than 8,000 vintage & classic cars still existing in India that cannot be exported, the market potential is rather vast," said Gautam Sen, an internationally acknowledged automotive expert & scholar & the Head for the Historical Vehicles Division for Osian's.

Neville Tuli, Osian's - Founder & Chairman, added, "This auction will also destroy the 'cash' economy mindset as Osian’s did over two decades ago with Modern and Contemporary Indian Art. It is a great opportunity, as there are many die-hard enthusiasts and collectors of vintage & classic automobiles in India, waiting for a new credibility and structure, a few even braving imports at the unbearable 240% Import Duty, which will disappear as the government recognises the archaic nature of such a deterrent, especially as it has no 'Infant Industry' justification existing today."

India & Osian's first live automotive auction has attracted a most impressive line-up of historic vehicles: three Cadillacs, two Rolls-Royces, a Bentley, a Daimler, a Chevrolet and a Jaguar, are some of the more prestigious marques amid a line-up that includes popular and affordable cars too, such as Fiats, Ambassadors, Austins and Fords. 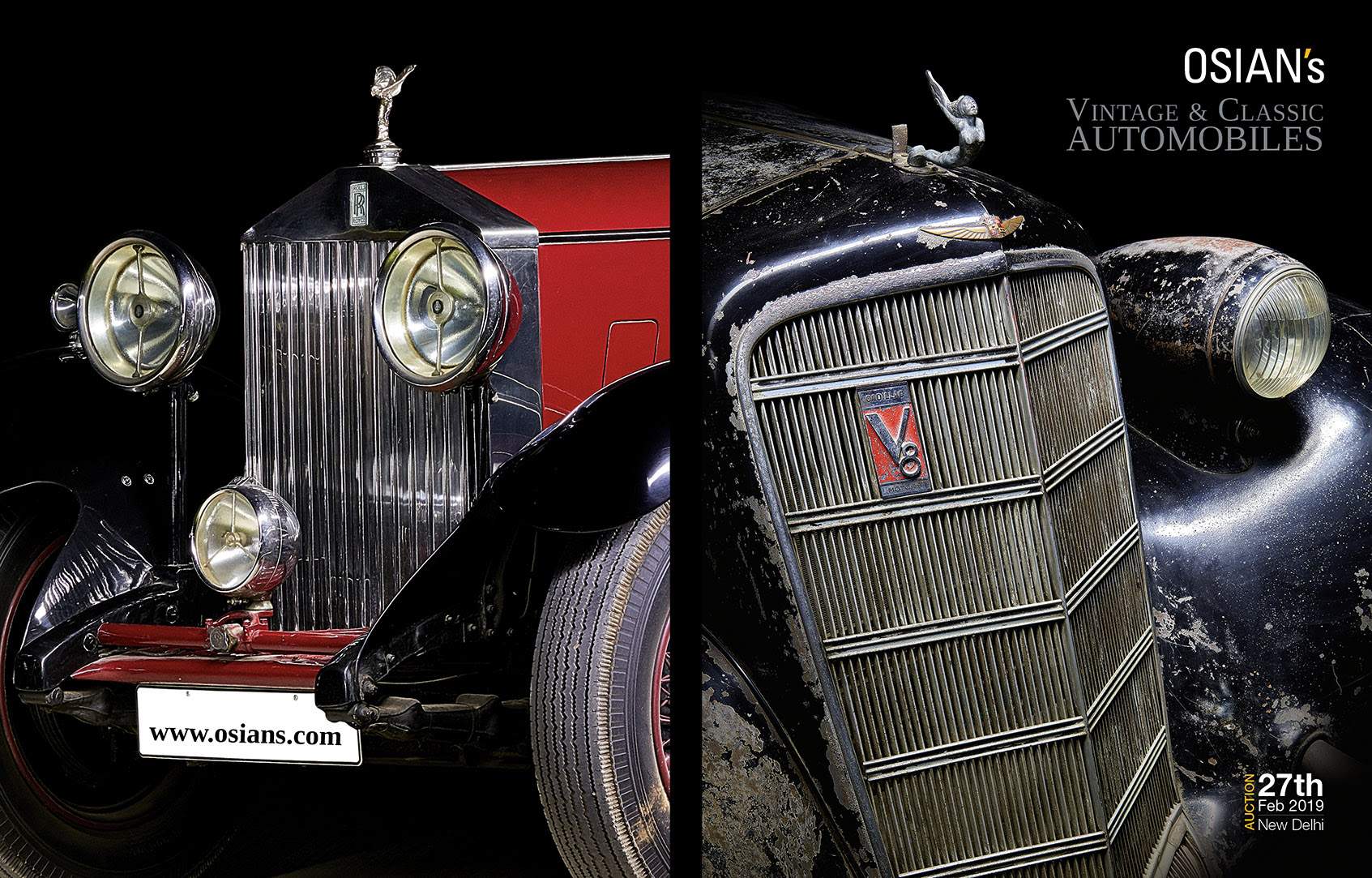 India's first live automobile auction promises to be an exciting start to giving greater transparency, financial credence and a deeper historical insight to the world of historic vehicles in India, as enthusiasts & experts warm up to the idea of openly buying and selling automobiles so as to deepen or modify one's collection and interest, and in the process deeper integrate the living automotive heritage into the fabric of daily Indian life.

The auction also hopes to act as a catalyst & barometer to the realistic values and appreciation of historic vehicles in India, as has been experienced throughout Europe and USA, as well as ignite the excitement of all enthusiasts, across age, background and gender, to take a renewed look at the pleasures of experiencing, owning and enjoying a historic vehicle, one that has been evaluated and described correctly by experts.

As many as 38 cars will come under the hammer on the 27th February at an event to be held at Le Meridien Hotel, in New Delhi. Reserve Prices of the cars range from as low as INR 200,000 to over INR 20,000,000, providing for an extremely wide range of car choices.

Cars have been consigned from across the country, with collectors from Bengaluru, Chennai, Hyderabad, Kolkata, Mumbai and Pune sending their cars for the auction in Delhi.

Of course, the most significant number of cars consigned are from Delhi itself. Prominent collectors such as Diljeet Titus, Zaheer Vakil, Rishad Kundanmal, Partha Banik, Naveen K, Zain Bilgrami, Bhavesh Solanki, among others, have all contributed to the impressive inaugural line-up.

The cars on offer include freshly restored, almost mint-condition historic vehicles, as well as cars that could make for an interesting restoration project. We are also proud to announce that one of the cars on offer is an amazing case of an untouched, non-restored, beautifully preserved Cadillac car from 1934, one which has survived the vagaries of time in an impressive state.

Rarely do cars of such kinds come up for sale anywhere in the world. Similarly, there are several cars with very impressive provenance, cars from the princely states of India, or cars that have been owned by famous personalities.

The Modern Art sale is itself a magnificent Collection, including masterpieces by VS Gaitonde, MF Husain, FN Souza, Jehangir Sabavala, Ganesh Pyne, Bhupen Khakhar, Jagdish Swaminathan, Ramkumar, among many others, but naturally given the pioneering nature of the Automobile Sale, most attention will be grabbed by those dream machines which combine science, speed, sex appeal and style like few other objects created by humankind.

All the cars can be viewed at 14 Green Avenue, Vasant Kunj, New Delhi from the evening of the 15th February 2019, when Osian's will have its Opening Preview for both the Historical Vehicles and the Modern Fine Arts, until the day of the Auction.

For a better understanding of the line-up of cars, visit the Osians website for details and the e-catalogues of both auctions, or request to purchase the limited edition Inaugural Osian's Vintage & Classic Automobile Catalogue.