JAPAN MAY NO longer be an economic juggernaut, but its biggest artistic export is taking over the world. Anime (animated cartoons), manga (comics and graphic novels), and cosplay (the act of dressing up characters from anime) have seeped into the global cultural fabric.


Today, the worldwide anime industry, powered by streaming giants like Crunchyroll, is worth over $20 billion. So, it shouldn’t come as a surprise to anyone that millennials across India have embraced this content. In fact, Chennai hosted its first-ever ‘animecon’—a three-day festival of all things anime—back in 2018. It was around this time that a set of fans of this medium formed Chennai Anime Club (CAC).

In graphic detail
Next week, as a non-profit initiative, CAC will collaborate with PVR to host a screening of the highest-grossing Japanese film of 2019, Weathering with You. “Normally, online petitions don’t amount to anything,” begins Nikhil Ravikumar, a founding member.


He adds, “But, Makoto Shinkai, the animator behind this film has a massive fan following. PVR’s Vkaao faction noticed the phenomenal response we received and agreed to a screening. We’ve almost sold-out.” As the saying goes, there’s a manga for everyone and animes for literally every topic under the sun—the CAC simply wants to help you discover it. 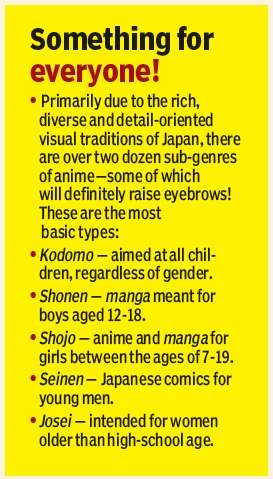 “We’re a laidback offline-meetup focus group, which tries to help people of all ages gain a better understanding and appreciation of anime as a medium rather than a genre,” explains the 25-year-old, elaborating, “What began as a safe space —powered by apps like WhatsApp and Discord—to discuss about anime and beyond, think eSports, J-Music, tokusatsu (live-action shows), evolved into a place where people are signing up to even learn Japanese!”


But, these youngsters don’t just meet twice a month at cafés around the city and geek out. They were one of the major forces behind the cosplay contest and Japanese language workshops at IIT Madras’ Saarang. On a personal front, Nikhil, an animator by profession, also helped organise and bring self-publishing comic book artistes to showcase their wares at the Indie Comix Fest.