Set to take place 25-29 January, the ‘greatest literary show on Earth’ returns to Jaipur’s historic Diggi Palace Hotel in 2018 for its 11th edition. After the Mumbai preview at the Royal Opera House last week, the Festival held its Delhi preview in partnership with the Taj Group of Hotels. The third roster of speakers unveiled this evening exemplifies the diversity and depth of intellect from across India and the world, hallmarks of the Festival.

The ZEE Jaipur Literature Festival, which has often been described as the ‘Kumbh of literature’, has hosted nearly 2000 speakers and welcomed over a million booklovers over the past decade, evolving into a global literary phenomenon. This year, the Festival will host over 350 writers, thinkers, politicians, journalists and popular cultural icons from over 35 nationalities, representing over 15 Indian and 20 international languages as well as major awards such as the Nobel Prize, the Man Booker, the Pulitzer Prize, the Padma Vibhusan and the Sahitya Akademi Award.

The third list of speakers features a stellar line-up of Indian and international names covering issues as varied and complex as war and geopolitical boundaries, the environment and climate change, dystopia and gender along with broader themes such as science, history, cinema and Shakespeare.

Bestselling international novelist Adam Nicolson will speak about the resurgence in nature-writing heralded by the current wave of green literature; cultural historian and Virginia Wolfe expert Alexandra Harris will offer a fresh perspective on the English writer’s iconoclastic masterpiece Orlando; award-winning journalist Åsne Seierstad, who went to Afghanistan two weeks after September 11th and later returned to live with an Afghan family will share her insights on the troubled nation; Dominic Dromgoole, former artistic director of the Globe Theatre, will discuss Shakespeare’s universality and how his works manage to resonate with audiences from China to Syria as seen through Globe to Globe, the recent world tour of Hamlet. Harvard professor Homi Bhabha, with his vast knowledge of post-colonial writing, will also speak at the 2018 edition of the Festival as will forensic anthropologist Kathy Reichs, whose books inspired the popular American television series, Bones; human rights activist and surgeon Ma Thida will speak of her ideals and chronicle Myanmar’s dramatic history; author and filmmaker Nasreen Munni Kabir will take part in a candid conversation with musical maestro Zakir Hussain; Philip Norman, author of biographies on the Beatles, the Rolling Stones and Elton John, will recollect anecdotes from the Beatles’ famed 1968 visit to India; celebrated naturalist Redmond O’Hanlon will take us on a fascinating journey deep inside the People’s Republic of Congo, where he went in search of a dinosaur rumoured to have survived in a remote prehistoric lake!

Amongst the Indian speakers are geo-strategist Brahma Chellaney who will stir up the troubled waters of the South China Sea and the Brahmaputra conundrum; C Raja Mohan will consider the many ideas that make China an Asian powerhouse; author and economist Gurcharan Das will analyse the complex modern triptych of aspiration, greed and instant gratification and the elusive idea of frugality; poet and novelist Jeet Thayil will discuss his latest book, The Book of Chocolate Saints, and his dominating themes of love, hate and savagery.

P Sainath, India’s best known development reporter, will shed light on the heart of darkness within India’s agrarian and rural reality; filmmaker and environmentalist Pradip Kishen will unravel the ancient history and the rugged topography of the mysterious Aravalli hills; debut novelists Prayaag Akbar and Preti Taneja will discuss their chillingly dystopic novels, Leila and We That Are Young respectively; Bollywood royalty Sharmila Tagore will speak to her daughter, Soha Ali Khan, who has authored a witty memoir titled The Perils of Being Moderately Famous; the sassy septuagenarian Shobhaa De, with her characteristic charisma and irreverence, will discuss turning 70, the subject of her latest book; environmental crusader Sunita Narain will make an impassioned plea to overcome the impending global climate catastrophe; diplomat TCA Raghavan, author of The People Next Door: The Curious History of India’s Relationship with Pakistan, will discuss cross-border dynamics; and columnist Vir Sanghvi will regale festival-goers with his refined palate on the unlimited potential of food. 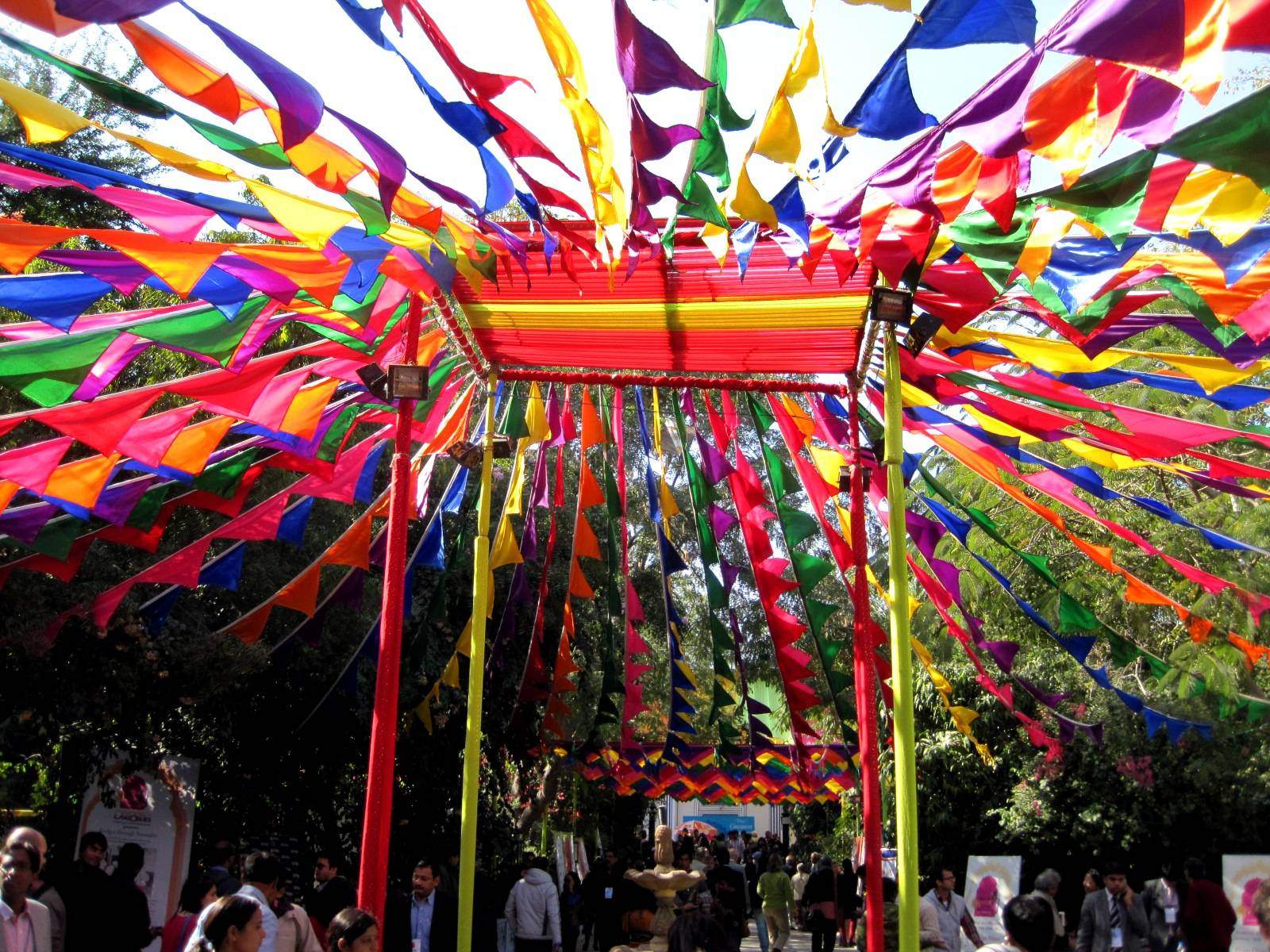 At this evening’s preview, audiences were also given a captivating behind the scenes glimpse into what it takes to curate and organise such a mammoth literary extravaganza. Festival Co-Directors Namita Gokhale and William Dalrymple alongside Sanjoy K Roy, Managing Director of Teamwork Arts, which produces the ZEE Jaipur Literature Festival, spoke of the dynamics and the many intangibles of the Festival and its international editions.

The evening’s programme also featured a session titled ‘Populism is the Greatest Threat to Democracy’ with earnest and fine-honed perspectives from Shashi Tharoor, Rakhshanda Jalil, Pavan K. Varma, Akhil Sibal, Pinky Anand and Pragya Tiwari on the raging debate over whether populism is a danger or just a mere challenge to democracy.

As seen in previous years, the ZEE Jaipur Literature Festival will open with its B2B arm, Jaipur BookMark (JBM) on 24 January. Now in its fifth edition, JBM aims to provide a platform for publishers, literary agents, translation agencies and writers to meet, talk business deals and listen to major industry players from across the world.

This year’s edition of JBM sees new trends and innovation take centre-stage. Nikko Odiseos from Shambhala Books, speakers from Walking BookFairs and Books on the Metro teams will share their passion for the written word at a session that celebrates unusual booksellers and curators who breathe new life into preserving books.  A roundtable on digital narratives will examine the potential of a new genre of reading with speakers such as Anish Chandy, Gaurav Solanki, Smriti Kiran, Arpita Das, and Anu Singh Choudhary. Roundtables on issues such as academic and trade publishing are also set to take place, featuring stalwarts like Manas Saikia, Urvashi Butalia, Sugata Ghosh and Vikas Gupta, amongst others. A session bringing together festival directors of various Indian and international literary festivals is also on the JBM programming calendar.

January 2018 will also see JBM present the second edition of its extremely successful ‘The First Book Club New Writers Mentorship Programme’, which will now include entries for short-stories and poetry as well as works of fiction or non-fiction from first-time writers who will be chosen for a coveted opportunity of mentorship under publishing veterans.

Speaking on the occasion of today’s preview, author and Festival Co-Director Namita Gokhale said, “Literature is an infectious form of magic, and shared stories and narratives reinforce our human bonds and understanding. As the new year approaches, readers, writers and book lovers look forward to the much awaited 2018 edition of the Jaipur Literature Festival. At the Preview, we share some of the sessions, themes and speakers who will bring the Festival to life.”

Writer and Festival Co-Director William Dalrymple said, “I am thrilled to launch our line-up in Delhi. The audiences that come to the Jaipur Literature Festival always contain a large number of Delhi literature-lovers and our list of star writers is always full of Delhi literati. We hope to see more Delhi wallahs than ever at the Jaipur Literature Festival 2018 and I look forward to welcoming them at the Diggi Palace in January.”

Sanjoy K Roy, Managing Director of Teamwork Arts, producers of the Jaipur Literature Festival, said, “We have an astonishing list of some of the most celebrated writers in fiction and non-fiction from across India and the world. Jaipur Literature Festival will be a feast for all the senses. You can sit on the lawns on Diggi Palace and travel the world understanding its different languages, histories, philosophies and economies.”

Every year, the Jaipur Literature Festival attracts a large and growing number of young people. In a bid to continuously engage with the youth, Festival producer, Teamwork Arts, run its annual School Outreach Programme in partnership with Pratham Books, India’s largest not for profit children’s publisher. Now in its sixth year, the School Outreach holds exciting interactive sessions in as many as 100 educational institutions across Delhi and Jaipur, taking the excitement of the Festival right into their classrooms. The School Outreach encompasses a range of activities that bring the joy of reading and new ideas to young audiences and kicked off with its first two sessions here in Delhi at Shaheed Rajpal DAV Public School and at the Pratham Learning Centre. A total of 20 sessions will take place in the capital before the School Outreach heads to Jaipur to complete nearly 100 sessions. The School Outreach Programme seeks to champion and encourage the next generation of young readers and enable them to meet and learn from some of the world's greatest writers and thinkers.

In line with the Festival’s core values to serve as a democratic, non-aligned platform offering fair access, entry is free and open to all.