Rife with personal anecdotes, political history and, of course, art — painter and writer Rukmini Varma’s Hidden Truth is a homage to her great-great-grandfather, Raja Ravi Varma, encompassing his life not only as a figure of importance in the art world, but also as a royal during colonial rule in India.

Ask her what kind of ‘hidden truths’ one can find in her book and she says, by way of example, that when the artist was painting his renowned 'Rama Sagar Darpa Haran' (Rama Vanquishing The Ocean), “few know that as he painted dark clouds on the canvas, with a bolt of lightening striking through, on a warm afternoon at 2.30 pm, the skies darkened and were split by lightening, exactly how he had painted it on the canvas.”

The veteran artist chats with Indulge about why her book shouldn’t be termed a biography, how she is constantly inspired by her great great grandfather, and which of his works are among her own favourites.

How did the idea for the book come about? Did you always want to write an insider's perspective on the life and times of Raja Ravi Varma?
The book is not a biography on Ravi Varma. It is instead an clearer insight into the man himself, who he was, what made him tick, etc. The idea for the book came to me many years ago when I had the privilege of seeing, or chancing upon some of Ravi Varma’s hand written notes.

These notes were penned in the margin of a book titled Royal Academy Masters that he had been referring to. During his references he had penned down notes, thoughts, ideas in the margins of the book. A family member showed the book to me and I was entranced by his writings. I knew that these had to be put into words and given a platform for everyone to see.

How was the process of putting together the book?
The book has been written across many years. It was something that I wrote, but never imagined would be published. I had written it because the words were in me head and my pen wouldn’t stop flowing across paper. (Yes, I write in the conventional form on reams and reams of paper). I grew up listening to stories of Ravi Varma or Artist Appupen as we called him, from my grandmother Maharani Sethu Lakshmi Bayi who was his granddaughter.

Sometimes, even now, a story that I heard when I was 4 or 5 flashes across my mind and I remember that it is one that has not been recorded in the book. There are so many more things to write about Ravi Varma - he was not just a great artist, but a philosopher, a spiritual guide, a philanthropist, a musician, a poet and a devoted brother. I doubt you can stop with just one book about him.

Can you elaborate on how your own journey as an artist has come to be influenced by that of Ravi Varma?
I was completely blown over and enamoured by my great great grandfather’s works from a very early age. I wanted do similar work. However, I also wanted to keep my own identity. Hence I evolved my own style of work, inspired by his. In other words I kept to his palette but changed my method. He gave drapery and background as much importance as his main subjects in order to tell a story, while I rely on the subjects themselves to tell the tale. 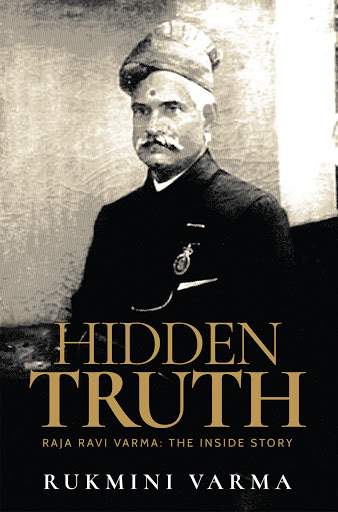 The book also includes glimpses of his paintings taken from family archives. Were there any artworks that you would count amongst your personal favourites?
His painting ‘There Comes Papa’ showing his daughter Mahaprabha carrying her little son on the hip, is one of my favourite works. It hangs at the Sri Chitra Art gallery in Trivandrum. Another one of my favourites ‘Victory of Indrajeet’ shows Meghanada presenting an apsara in his fathers court after he defeats Lord Indra. The 3 dimensional quality of this work is stunning and its one of my favourite works by Ravi Varma.

You write that "Art ... merely reflects the sentiments of the times." How do you feel this fits into the current scenario in the art world?
Take the example of any artist - be it Michelangelo, Rubens, Van Gogh, Monet, our Indian masters like Jamini Roy, Amrita She Gil… anyone. Their art has always been reflective of the times they lived in and the society around them. The same holds good even today.

Now you have artists exploring mediums such as artificial intelligence - the outcome or result is robotic and lacks sentiments. Its art that may look pretty on paper, but lacks depth and a timeless feel. Our times are such and this is the kind of art being produced today.

Will you be working on any more writing projects?
Yes, I continue to write (and paint) and hopefully you will see the next book out in the coming year.

Other books on Ravi Varma