Harry Potter and the Cursed Child: The Journey behind-the-scenes to release in November

Harry Potter and the Cursed Child is one of the most celebrated stage productions of the past decade.

Opening in London's West End in 2016, on Broadway in 2018 and in Melbourne in 2019 - and with more productions worldwide still to come (including San Francisco later this year) - the play has smashed records, collected countless rave reviews and awards, and captivated audiences night after night.

Now readers are invited behind the scenes to experience the show's journey to the stage - from the earliest phases of development with producers Sonia Friedman and Colin Callender, to the crafting of the eighth Harry Potter story with JK Rowling, director John Tiffany and playwright Jack Thorne, and to the gathering of an extraordinary team of artists and actors together to bring this new part of Harry's story to life.

Harry Potter and The Cursed Child is a multi-award-winning, record-breaking stage production that has captivated audiences around the world. 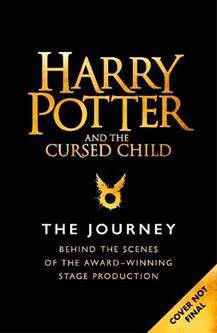 Combining sumptuous artwork and fascinating commentary and interviews, this book is the ultimate backstage pass that every Harry Potter fan has been waiting for Harry Potter and The Cursed Child was first published in July 2016 and was the fastest-selling book of the decade.

It was a number one bestseller all around the world, selling over 1 million print copies in the UK alone, with over 4 million copies distributed globally.

The Harry Potter series, published between 1997 and 2007, which have sold over 450 million copies worldwide, are distributed in more than 200 territories and translated into 79 languages, and have been turned into eight blockbuster films.

Harry Potter Theatrical Productions Ltd was founded in 2013 to develop and produce the stage play Harry Potter and the Cursed Child, the original new story by JK Rowling, John Tiffany and Jack Thorne.

The team from Harry Potter Theatrical Productions Ltd has worked closely with Sonia Friedman Productions and Colin Callender's Playground to produce the play, and also in expanding to new productions around the world.

Jody Revenson has written extensively about the films of the Wizarding World, beginning with her contributions to the New York Times bestsellers Harry Potter: Film Wizardry and Harry Potter: Page to Screen.

Jody wrote the Harry Potter Vault series, Harry Potter: A Pop-Up Guide to Hogwarts and Fantastic Beasts and Where to Find Them: Movie-Making News, among many other titles.