'I have no political ambitions as of now,' says Anupam Kher as he talks about his autobiography Lessons Life Taught Me Unknowingly

Versatility is Anupam Kher’s middle name, and no, we aren’t just talking about his roles in films. The doting dad to Shah Rukh Khan in Dilwale Dulhaniya Le Jaayenge or the therapist in Robert Di Niro’s Silver Linings Playbook — Kher is an actor, who also runs a premium film school in India, was the chairman of the Central Board of Film Certification, and the National School of Drama, in addition to being a “proud Kashmiri”. Now, he dons the role of an author, with the launch of his memoir, Lessons Life Taught Me Unknowingly. The book, he says, “has no target audience,” and is an overview of his life in 433 pages. Excerpts from a chat with the 64-year-old, from the bustling city of New York.

Actor turns author
Talking about his decision to write a book,  he says, “We made a two-and-half-hour play out of my life called Kuch Bi Ho Saktha Hai. For the last 14 years, I’ve been performing it all over the world. But about three years ago, I realised that a play about my life does injustice to a lot of other things I want to share. When I was looking for work, autobiographies of certain people like Charlie Chaplin kept me alive, both as an actor and as a person looking for work. So I thought, if my life can help people, then I should write it.” While the book is an inside look into the actor’s way of life, he adds, “I want the interpretation of the book to be inspirational for the millions of people who live in smaller towns and cities, who are from lower economic backgrounds. I think it’s important for people who don’t have a rich background to look at my life. I say this because I too am from a small town, lower-middle-income family, whose father was a clerk in the forest department. And through sheer hard work and optimism, I reached a certain stage, and I want that to be an inspirational tool for people.” 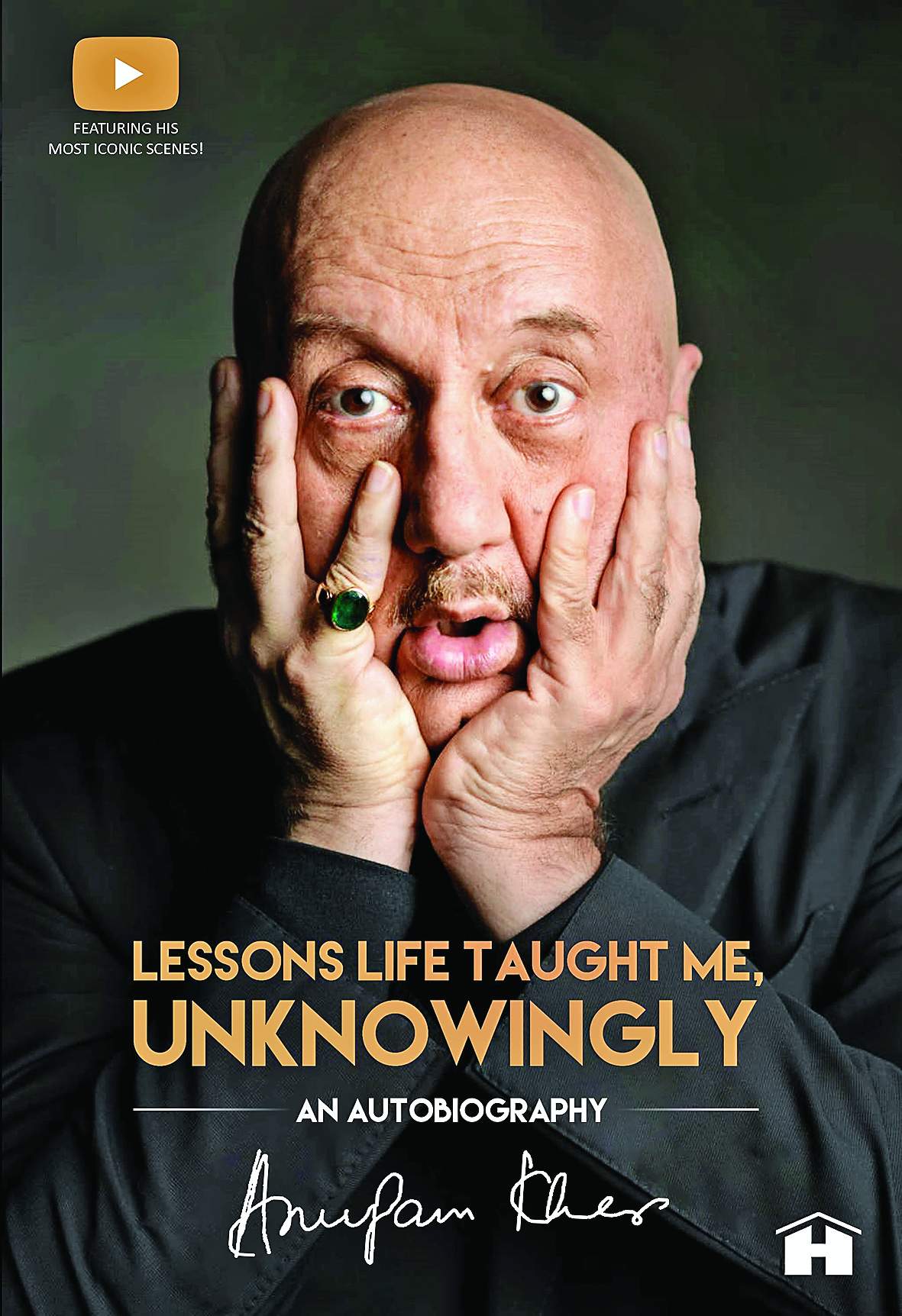 He emphasises that this book is for all generations because it shows “Bollywood in the ’80s, India before the evolution of mobile and technology, the importance of joint families, and how failures shouldn’t stop you from achieving your dreams and goals in life,” he says, adding, “I don’t claim to be a literary writer, but I have tried to put it as simply as I felt. That’s why I wrote it myself. I didn’t want a writer. I want the book to reflect the true flavour of me.”

Kher, explains in detail, how he enjoys the literary works of famed Russian authors, particularly, Leo Tolstoy and Chekov. He says, “I’m a trained actor, and I’ve read a lot of books. I love Russian literature. But because I am a drama student, I also enjoy the works of everyone from Arthur Miller to Tennessee Williams. All these people have influenced me in some way. I do, however, think that life has been more influencing.”

Lights, camera, action
The actor, whose early films in Hollywood include Bend It Like Beckham, is currently shooting Season Two of the famed TV series, New Amsterdam in the US. The veteran has worked in multiple industries under his tenure as an actor, so we asked him about how Hollywood and Bollywood have it different. “Things have changed now,” he says, referring to the Indian film industry. “People in India are much more professional and tech-savvy.”

Reminiscing his past experiences, he adds, “When I started in the early ’80s, it was not necessarily so professional. There was too much paperwork, but in Hollywood, everything is ready before they go on set — they (organisers) do a lot of pre-work. But now in the last seven or eight years, there’s a change in India too. I believe it happened because the corporates have come in. They want professionalism, and shooting starts fairly on time. The new generation actors are also much more disciplined, and the system is quite different from back in the day. Now you have to be professional. I used to do 21 things at once, but now, I have to focus on one thing at a time. Previously, quantity was more important than quality.”
In addition to his roles in Hollywood, Kher’s work frequently involves him collaborating with his role models — the likes of Woody Allen and Robert De Niro. He says, “Sometimes you want to do things with certain people because you just want to see them at work. I’m a great fan of Woody Allen. I learnt a lot from his movies; he’s an amazing writer and director. Shaking hands with Michael Jackson was almost impossible, but I managed to do that. I was very happy to meet and do a film with Robert De Niro too.”

Politely refusing to name industry icons, Kher adds, “God has been kind to me that I’ve been working with people that I want to work with. I still do. Not many people get to do that, so I’m very happy. But yes, there are a lot of people — directors — I want to work with, in Hollywood. I don’t want others to feel bad, so I’m not naming names.”

In a New York minute
We gather that a cab driver in New York recently recognised Kher, and even joined the actor in singing some songs. Kher really enjoys the attention. “I’m very thrilled about being recognised in foreign cities by the local crowd. For an actor to be recognised and respected is a great sense of achievement and feeling. But I’m even more intrigued by South Asians because they sing songs and speak dialogues from my movies. And that makes me feel very humbled. Millions of people from Mumbai strive to become actors, and .001 per cent actually make it. I’m one of them. So life has given me opportunities to be able to do that.”

On the flip side, there are times when people fail to recognise him as well, he says, narrating an incident with another cab driver in New York. “It was very amusing to me. I like living life, and I love encounters. I’m a people-oriented person. So, it’s wonderful to be able to interact with people from all around the world, and that’s why I put it (a post on the interaction) on social media. I also see the funny side of life and am happy about that. Every encounter is an enriching one. Every encounter you go through in life will teach you something, but you shouldn’t take it so seriously. There will be people who don’t recognise you and make you feel humble, and people who recognise you and make you feel great. So anything that happens in your life is a big lesson.”

Before fame engulfed the veteran actor and propped him up to his now-celebrity status, he acknowledges his choices over time and says, “I don’t believe in regret. For me, life was a journey, not a destination. In that journey, good things happen, and bad things happen. But both teach you a lot about life. You feel bad for some time, but you need to move on. God has been very kind to me, and I thank him for giving me such opportunities.”

Looking ahead
The actor also runs a school, Actor Prepares, to...well… prepare actors who are trying to break into the competitive industry. “When you have professional doctors, engineers, why not professional actors?” he asks. “We are in a world where we need to be at the top of our game, and that can only happen once you start professionally. We’ve started a course for people above 50, and we also have more courses for children, apart from other commonly found choices.”

Being a politically active person, we can’t help but wonder if he will ever enter the realm of statesmanship. He says, however, “To me, the truth is important. When I’m asked about something, I would like to be truthful about it; that’s what I’ve been taught. And, when there is more than one point of view, it is important to give your point of view also. I have no political ambitions as of now. I don’t know about the future, but I feel it’s important to be vocal about any issue. How long can one live diplomatically?”

Talking about his future projects, Kher says that there’s plenty to look forward to, especially in the next four months. “I won’t be able to reveal them now because it’s still being finalised, but I can tell you that it’s not necessarily a movie. I want to bring India to America — bring the culture of India to America. So, I’m working on a few things to aid that. Hopefully, it materialises. I’m an unofficial ambassador of India in America, and I feel I should bring the culture of the country that has given me so much to the States — whether it is the yoga, our culture, more food from what’s already there and so much more.”