Batman Forever: No ‘endgame’ in sight as the Caped Crusader turns 80 years old

This weekend, the long-familiar and iconic Bat-Signal will have been sighted for 80 years, and counting. If you, like us, were wide-eyed fans of the caped crusader, then you too might do well to stay up all night on the eve of this Saturday, September 21st, to spot that glorious Bat light being shone across the dark skies of your own Gotham — even if it’s just for some harmless playacting on the terrace of an apartment complex.

To observe Batman Day, and to mark the Dark Knight’s 80th year as the World’s Greatest Detective, DC and Warner Bros have lined up celebrations across the world. The foremost attraction will, of course, be the lighting up of the night skies with projections of the iconic Bat-Signal. There will also be full-scale fan celebrations in major cities around the world. 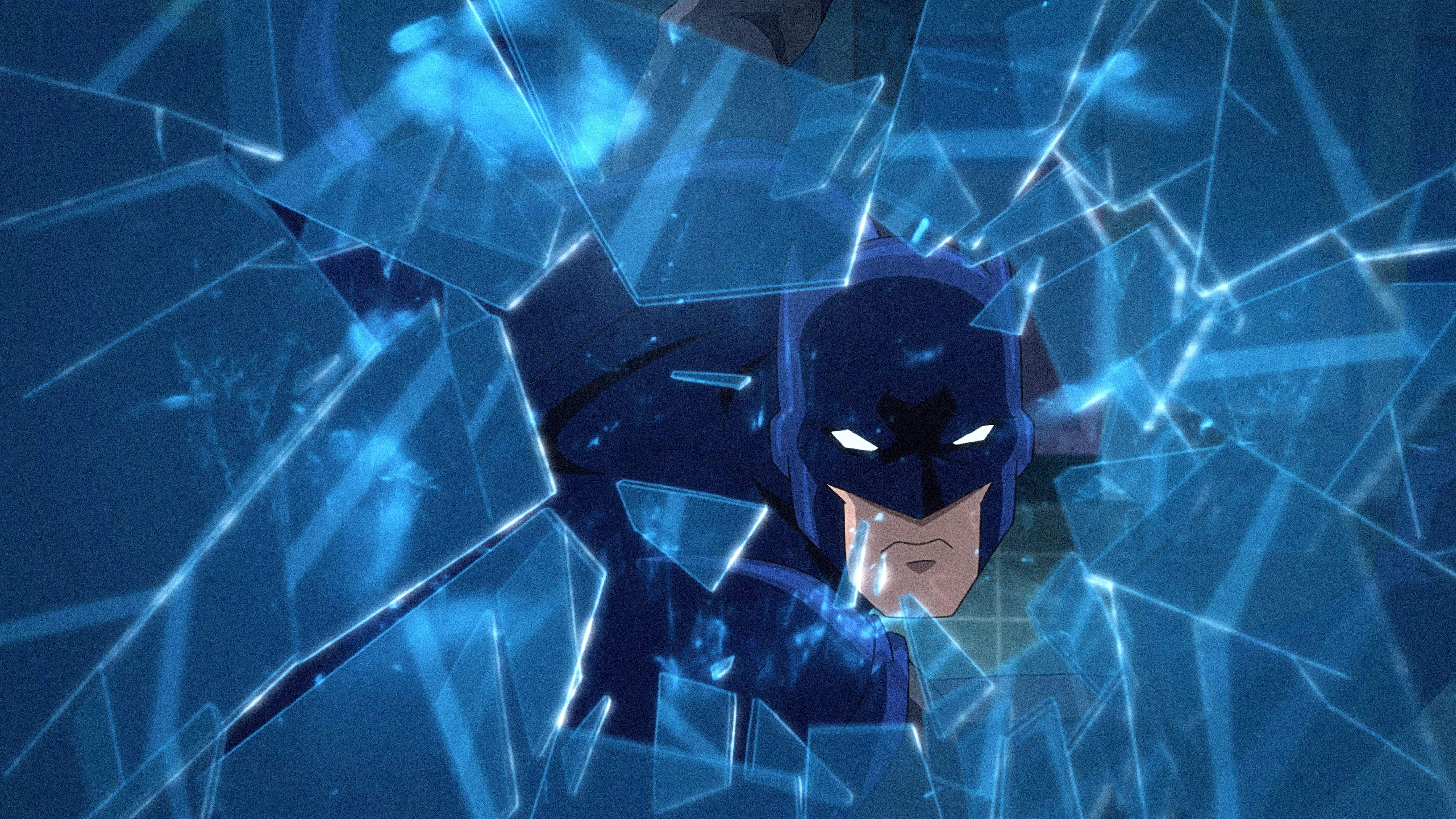 Fans in India can follow the lighting up of Batman’s iconic symbol on famous skyscrapers and landmarks around the world, as the event will be covered live on a new interactive Batman Bat-Tracker, launched by DC earlier this month. The Batman Bat-Tracker — available at Batman80.com — will mirror these real-time projections as each city flips on its Bat-Signal. Pam Lifford, president of Warner Bros Global Brands and Experiences, also presented a lengthy lineup of events to mark the occasion. “We are proud to send up the Bat-Signal on Batman Day, because it is an important beacon of inspiration that makes us all believe that it’s possible to take hardship and turn it into something good. Batman Day is a global celebration for all the fans,” he added. The Bat-Signal is scheduled to appear around 8 pm in each of the chosen cities, including Melbourne, Tokyo, Berlin, Paris, Barcelona, London, São Paulo, New York, Montreal, Mexico City and Los Angeles. There will also be Batman runs, marathons and 5K night runs held across the world.

DC Publisher Dan DiDio added a few words of inspiration: “Batman’s lack of superpowers roots him in reality,” he said. “He’s an underdog and people find this inspiring, and they see themselves in Batman.”

How to celebrate Batman Day

Comics for all ages: DC Publishing will be offering free special editions, at select bookstores around the world, of editions like The Batman Who Laughs, Batman: Night-walker, and the Legend of Batman collector's edition.  In select cities, talent appearances and signings by some of DC’s leading storytellers will also take place.

Batman in the Game: Warner Bros Interactive is expected to release new themed games, while also hosting arena marathon events online and via select tie-ups. Look out for the new in-game T-shirts on DC Universe Online.

Be Batman: Custom pop-ups will be curated across the US and the world (through Sep 30), offering limited-edition Batman merchandise. Fans can also gear up with new fashion and sneakers.
Batman gives back: Various clubs will honour kids, teens and youth professionals who stand up for positive change in their communities — like Batman himself!

Let us know how you plan to celebrate Batman Day! Share it on our social media channels, and look out for more exclusive content on www.indulgexpress.com 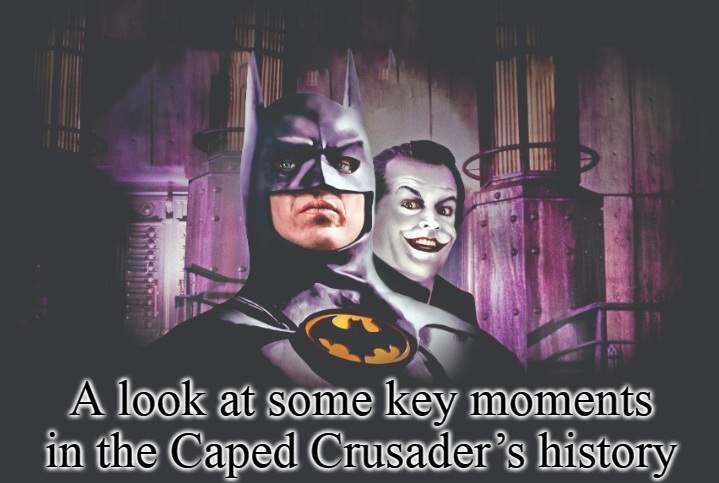 Batman: The Killing Joke (1988)
The last panel on the last page of this well-known graphic novel poses the ultimate question — despite Batman’s well-known oath to never kill, would he end The Joker once and for all, if he had the chance? Writer: Alan Moore, Artist: Brian Bolland.

Batman: A Death in the Family (#426-#429; 1988)
Batman experiences his greatest failure with the death of Jason Todd at the hands of The Joker. This speaks to Batman’s humanity and the responsibility he feels towards his allies, and how despite his best efforts, he can’t totally remove the emotion from his interactions with them. Writer: Jim Starlin, Artist: Jim Aparo.

Knightfall (Batman #497; 1993)
A moment immortalised in Christopher Nolan’s The Dark Knight Rises, Batman is pushed beyond his limits when brilliant murderer Bane confronts an exhausted Batman — and breaks his back. This iconic scene is the climax of a storyline that took over a year to complete, and that led to long-term ramifications for the Batman continuity. Writer: Doug Moench, Artist: Jim Aparo.

JLA: Tower of Babel (JLA #43-#46; 2000)
The Justice League comes to learn that Batman has contingency plans for all of them when Ra’s al Ghul uses the plans to defeat them, leading to Batman nearly being expelled from their ranks. Writer: Mark Waid, Artist: Howard Porter/Steve Scott.

Detective Comics #241 (1957)
Dick Grayson injures his arm while saving a child from runaway thieves. To prevent the crooks from connecting the injury to the Boy Wonder, Batman decides his only rational course of action is to wear colorful eye-catching outfits. This is a lighthearted example of what lengths Batman will go to in order to protect his allies. Writer: Edmond Hamilton, Artist: Sheldon Moldoff.

Batman: The Long Halloween (1996-1997)
The Caped Crusader leaves a plateful of delicious food down in the sewers, effectively sharing a touching Thanksgiving dinner with none other than Solomon Grundy. Although a vigilante, Batman’s compassion and humanity often influence his actions. Writer: Jeph Loeb, Artist: Tim Sale.

Batman: The Dark Knight Returns (1986)
Batman has managed to divert a nuclear bomb from destroying Gotham City, but the resulting electromagnetic pulse has wiped out electricity nationwide. Reminding the reader that Batman is Batman even without his gadgets and fancy vehicles, he rides into the climax on horseback with an army of reformed gang members at his back. Writer: Frank Miller, Artist: Frank Miller/Klaus Janson. 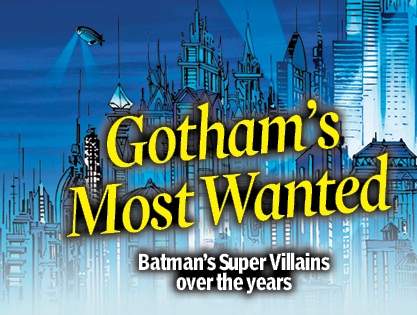 Two-Face
As Gotham City’s district attorney, Harvey Dent fought to bring criminals to justice until a vengeful mob boss threw acid in his face. Scarred physically and mentally, Dent went mad and became the unstable criminal known as Two-Face. Powers & Abilities: Suffers from multiple personality disorder. As Harvey, he’s cool, calm, collected — but as Two-Face, he’s diabolical and destructive. He’s so obsessed with duality, he flips a coin to decide the fate of his victims.

Bane
Born on the island of Santa Prisca, the boy who would become Bane was raised within the confines of his nation’s cruelest prison where he honed his mind by reading books. After decades of imprisonment, he escaped after an experiment to test a super-steroid called Venom. He then set his sights on Gotham City, with one goal in mind: destroy Batman.  Powers & Abilities: A brilliant strategist with an iron-clad will, and a skilled hand-to-hand fighter.

Harley Quinn
When she first met The Joker, Dr Harleen Quinzel was his psychiatrist at ArkhamAsylum. Instead of treating her patient, she fell in love with him and became his prankster partner-in-crime, Harley Quinn. Powers & Abilities: Although mentally unhinged, Harley is highly intelligent. She’s a skilled gymnast, and her agility makes her an adept fighter. Like The Joker, she uses a variety of weaponised gag props in her chaos-creating crimes!

The Joker
Once a small-time crook, The Joker fell into a vat of chemicals that turned his skin white, hair green, and lips red, like a crazed clown. His crimes always involve pranks and jokes ending with twisted punch lines. This guy is bad news for Batman and Gotham City!
Powers & Abilities: The Clown Prince of Crime uses a variety of deadly devices like an electrocuting hand buzzer, acid-squirting lapel flower, and razor-sharp playing cards.

Killer Croc
Born with a rare genetic condition that gave his skin a green, scaly appearance, Waylon Jones started out as a sideshow wrestler before becoming a monstrous criminal. Over time, his condition mutated, making him bigger, stronger, and more reptilian with razor-sharp teeth, armoured hide, enhanced senses and formidable threat. Powers & Abilities: More brawn than brains, Croc is an excellent fighter who relies on his animal instincts.

Mr Freeze
Victor Fries was a brilliant cryogenicist who underwent an accident that transformed him into the cold-hearted criminal known as Mister Freeze.Powers & Abilities: Mister Freeze must keep his body temperature below zero, so he wears protective armour that also grants him super-strength. He also uses a powerful freeze gun, capable of freezing anything in its path.

The Penguin
Mocked at a young age for his bird-like features, Oswald Cobblepot turned his resentment into a relentless desire for power. Now he’s known as The Penguin, a criminal mastermind and one of the most ruthless gangsters in Gotham City! Powers & Abilities: He has no superpowers, but is a master manipulator, capable of pitting his enemies against one another. His preferred weapons are customised umbrellas that release tear gas and even fire bullets!

Poison Ivy
Dr Pamela Isley was a shy botanist until a freak lab accident gave her a toxic touch, and the power to control plant growth. As Poison Ivy, she’s an ecoterrorist driven to rid the world of humanity to make it safe for plant life to thrive. Powers & Abilities: The ability to manipulate the growth of plants to her bidding. Immune to toxins, she produces pheromones that cause others to fall under her control. But her most powerful weapon is her lethal kiss!

Ra’s Al Ghul
One of Batman’s fiercest foes, Ra’s al Ghul leads the League of Assassins and controls the mystical Lazarus Pits, which kept him alive for centuries. Powers & Abilities: Ra’s al Ghul is immortal thanks to the mystical chemicals found in Lazarus Pits. Having fought in numerous wars over centuries, Ra’s is an expert swordsman and martial artist with keen strategic skills. As leader of an army of loyal assassins, Ra’s is considered extremely dangerous.

The Riddler
Jealous of what he believed to be the undeserved success of others, Edward Nygma felt he was too smart to play by their rules, so he became the masked criminal known as The Riddler. Powers & Abilities: His genius-level intellect. He’s a brilliant criminal strategist who loves to confound his adversaries with complex riddles. Not much of a fighter, he’s adept at creating elaborate weapons and traps to injure and ensnare his enemies.

Scarecrow
He was once Dr Jonathan Crane, a Gotham University professor. But when his experiments were deemed dangerous, Crane was fired. To exact revenge, he became Scarecrow, making the Gotham City citizens his test subjects.
Powers & Abilities: A master of psychological warfare, he loves to terrorise adversaries. He’s also a brilliant chemist who creates fear toxins designed to evoke the worst nightmares in his victims — especially his favourite victim, Batman! 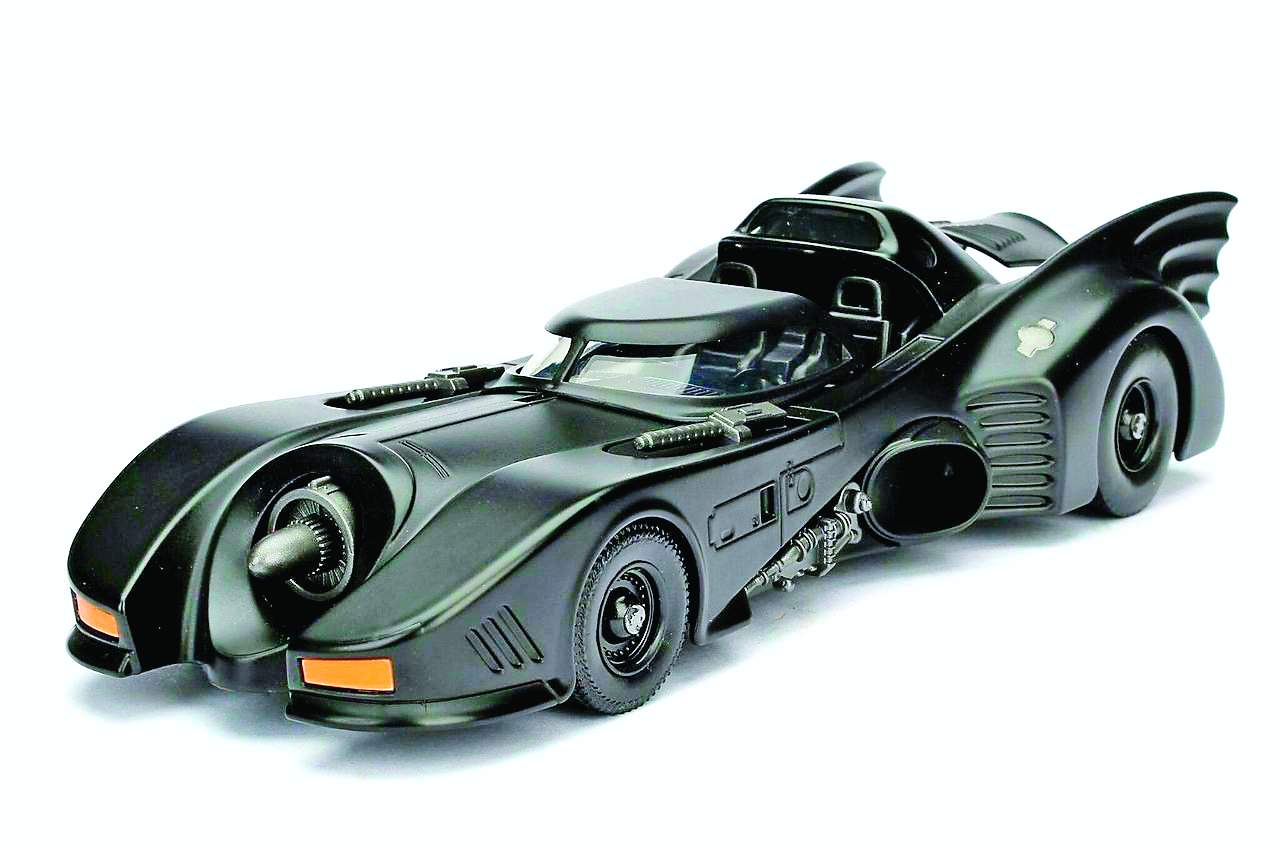 The Batmobile: For nearly 80 years, the Batmobile has been one of Batman’s most valuable crime-fighting assets. Though many versions of the vehicle have appeared, each offers a wealth of weapons and tools that give the Dark Knight the upper hand in any battle. The Batplane: Seats two, has vertical takeoff and landing capabilities. Its engine is equipped for silent running, and the computer is linked to the Batcomputer.

Batcopter: A helicopter-like lightweight vehicle that can be armed with machine guns, cannons and a variation of Batman’s handheld electromagnetic pulse.

Batboat: One of the fastest seacrafts in the world; has hydrofoil capability, state-of-the-art radar/sonar system, and Batcomputer uplink. 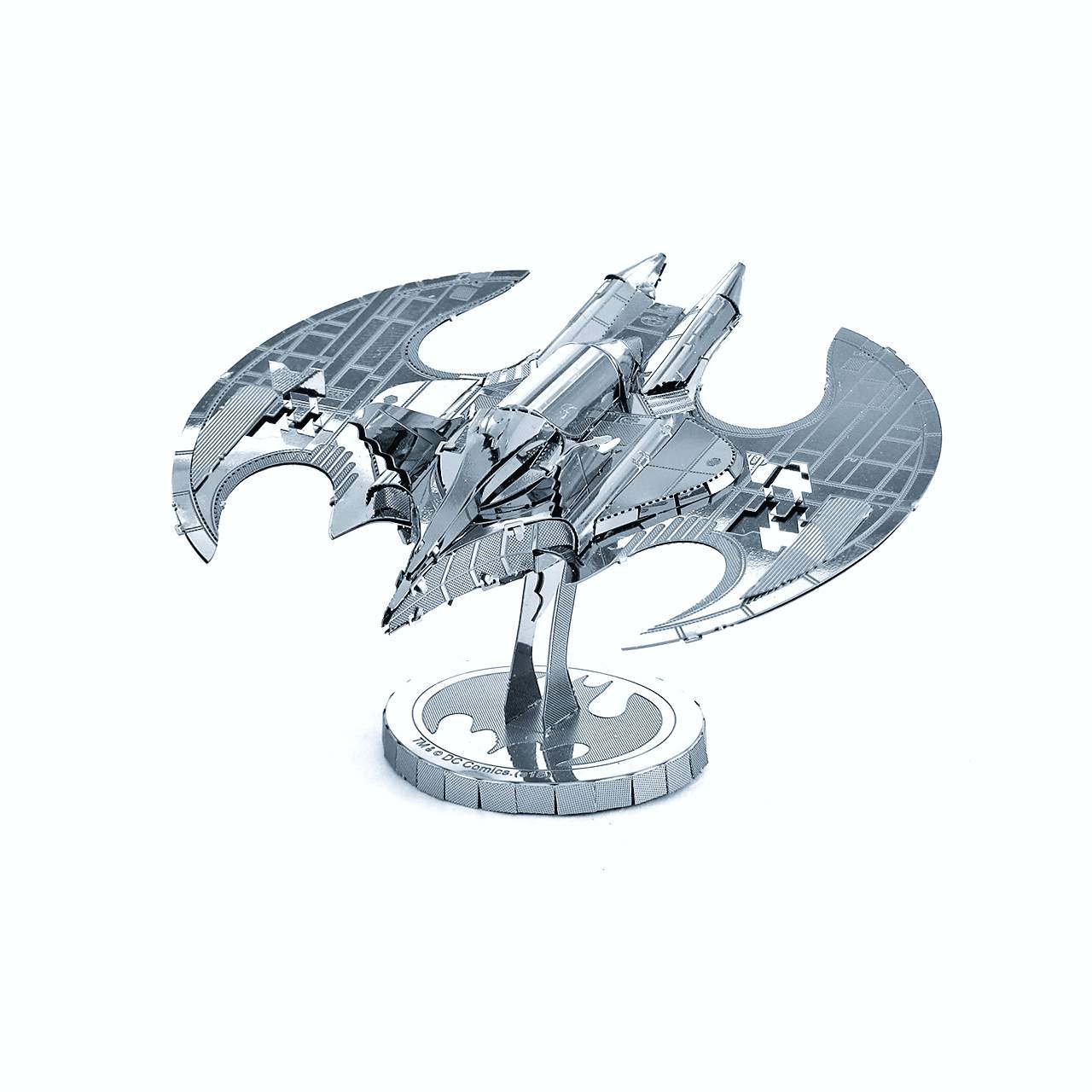 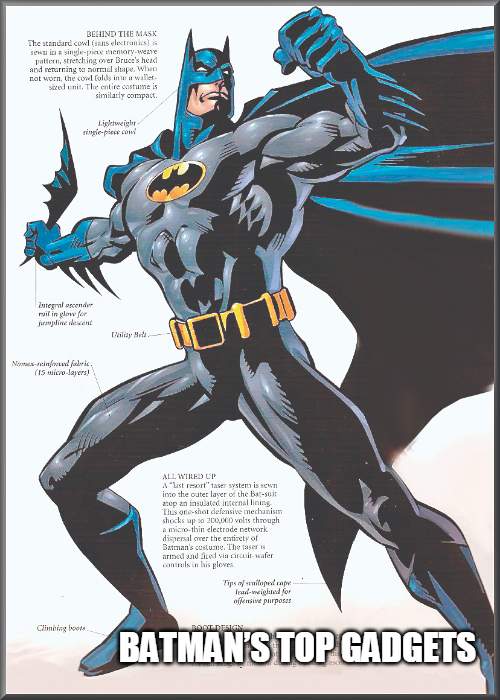 Grappling Hook: Fires a cable that can attach to buildings, police helicopters, or any other object, allowing Batman to swing freely. 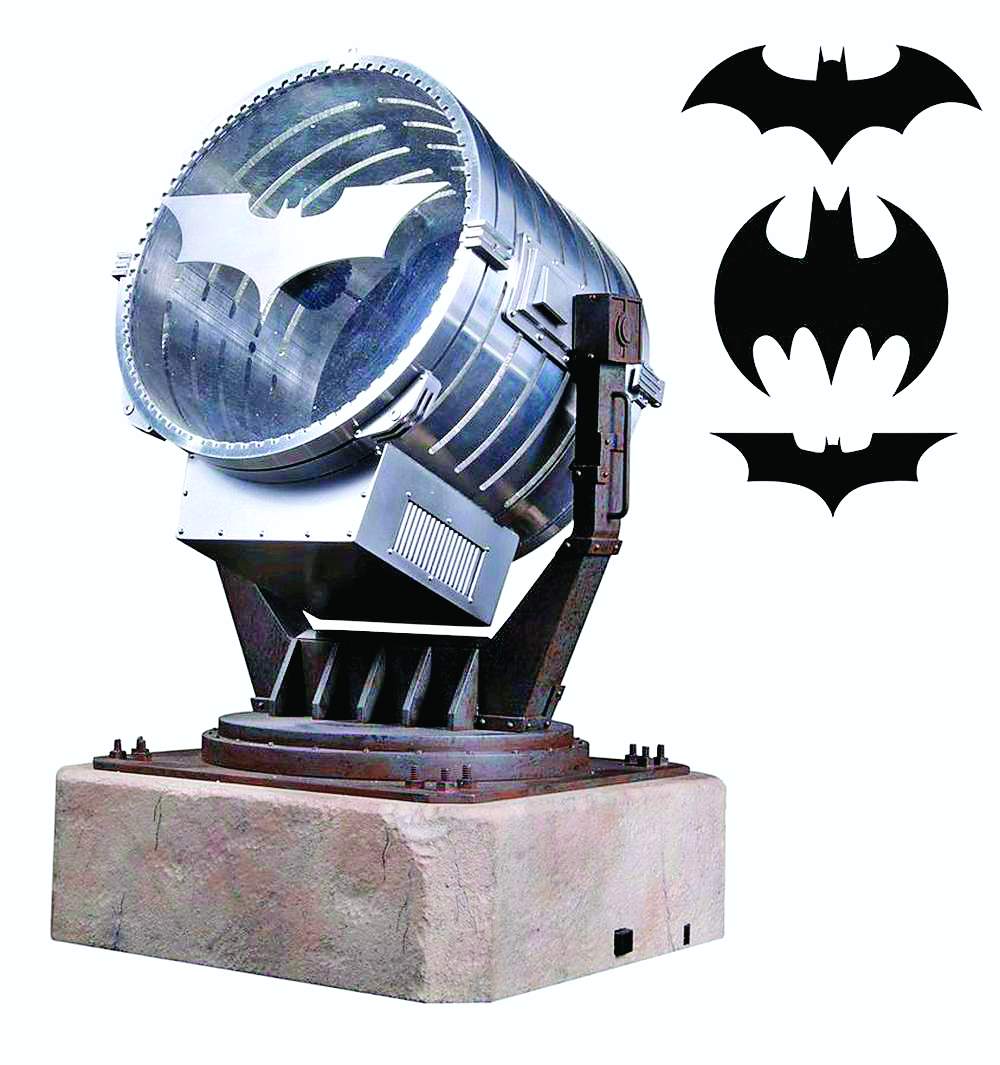 Bat-Signal: The ultimate way for Commissioner Gordon to get in touch with Batman; is specially modified searchlight with a stylised emblem, projecting a large bat symbol onto the skies over Gotham City.

Batsuit: Typically a grey bodysuit, chest emblazoned with a stylised bat, and blue-black accessories: A wide scalloped cape, gloves with a series of fin-like projections, boots, and a close-fitting cowl with ear-like projections to suggest a bat’s head. Most versions of the Batsuit incorporate some form of body armour, powered exoskeleton, built-in augmented reality computer, night-vision, gas filters and other aids for protection or effectiveness in combat. 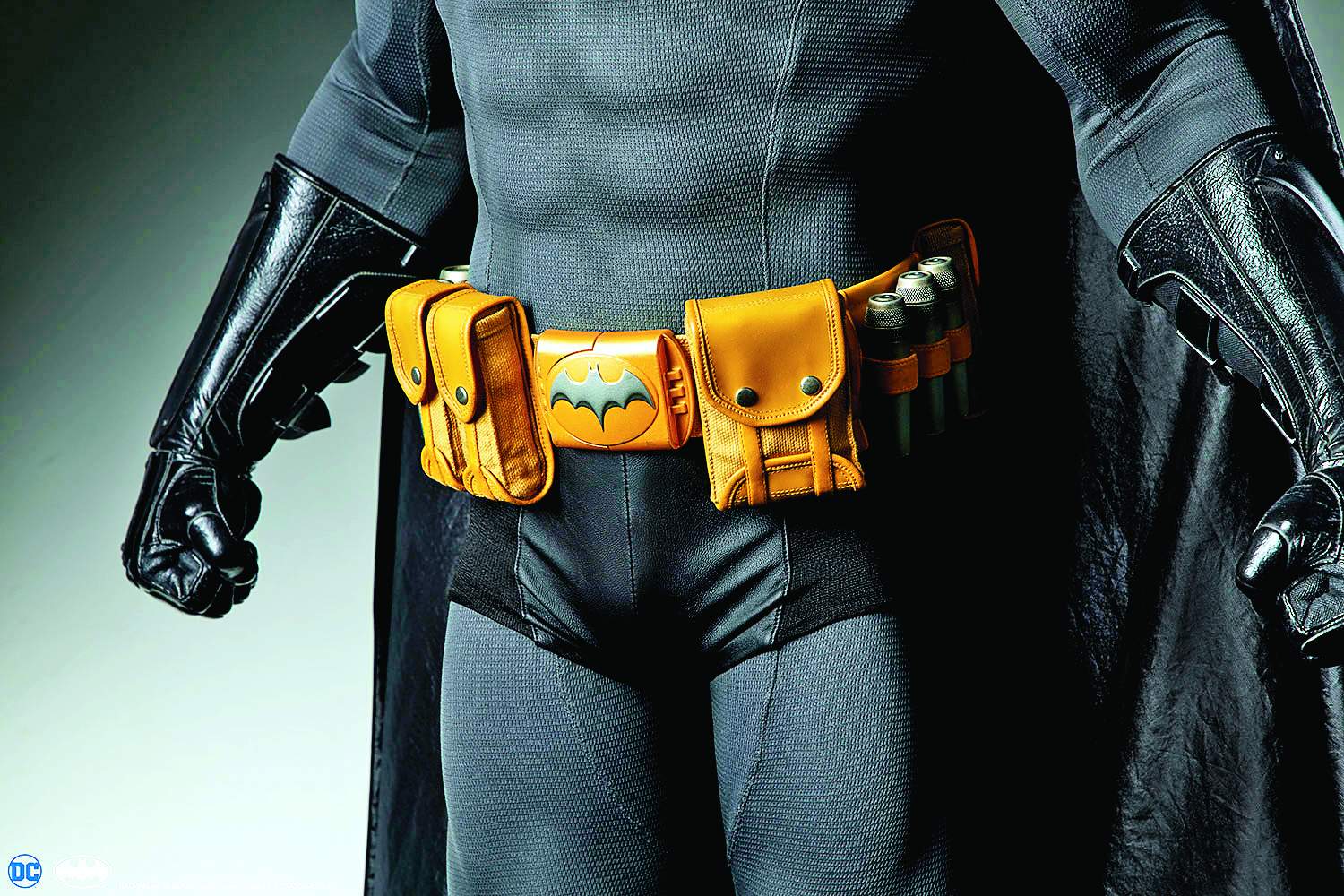 Batarang: A specialised metal throwing star, also known as a shuriken, sculpted like a bat.

Other popular Gadgets: The Bat Call, The Batphone, The Batcomputer, Shark repellent.