#MeToo broke the internet and shocked the world as stories of women being groped and harassed came tumbling down the the timeline. Amidst all this who do we have but a perv who films himself in crowded streets, touching women inappropriately and then proceeds to post the videos on Social media. 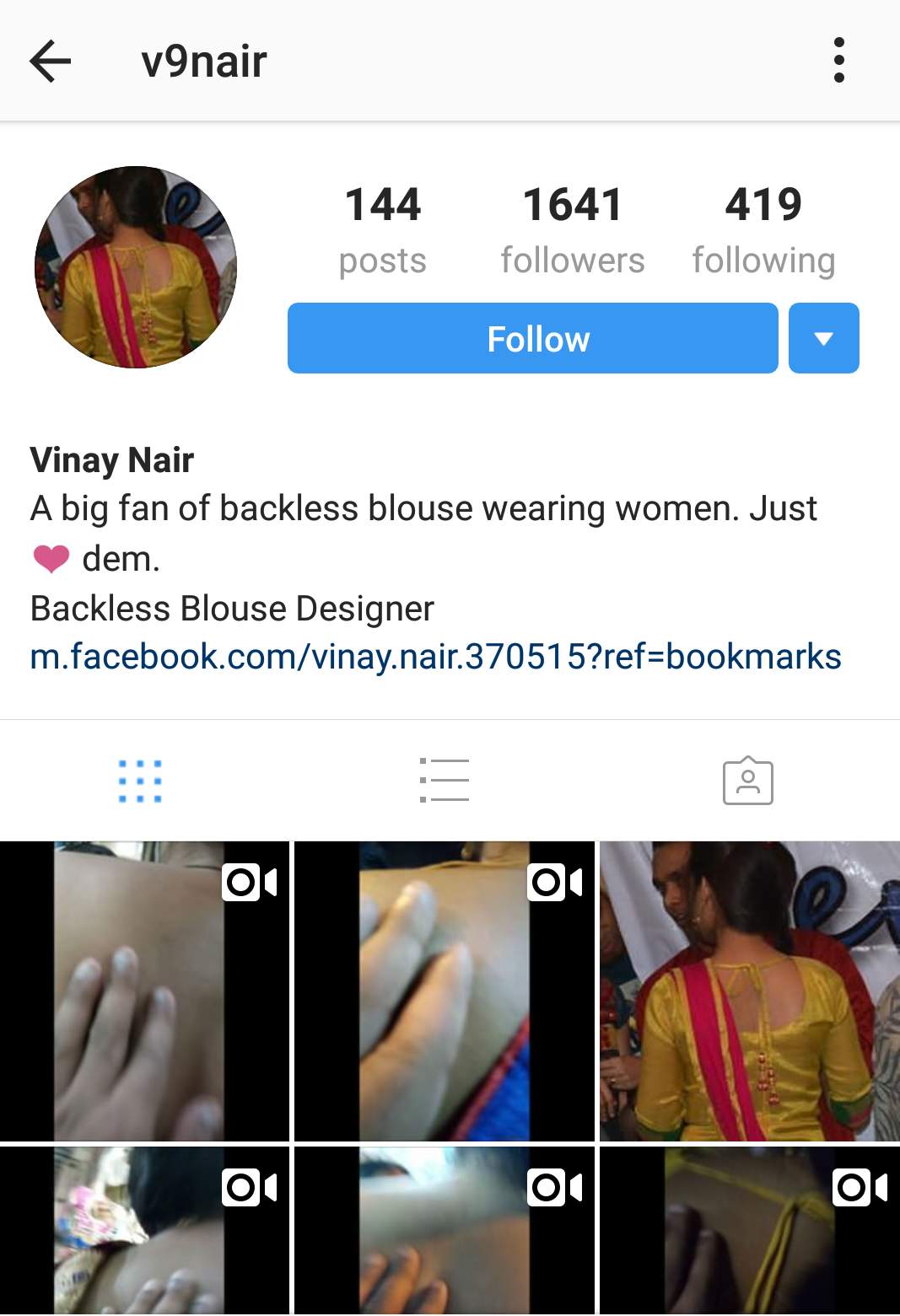 With over 144 posts and 1641 followers, this creepy Instagrammer, Vinay Nair ventures out into open marketplaces, usually during rush hour looking for women to touch. His bio reads, "A big fan of backless blouse wearing women. Just love them." His videos have crass hashtags like sexiest back, touched twice, touch and go, slomo and more. He also follows it up with hashtags like #sexiestback, #touchedtwice, #touchandgo and other such hashtags.

Noticed first on social media by Angad Gummaraju, she soon put it on Facebook and the post went viral. She wrote on her wall: "I was looking for blouse designs a few days ago, and guess what I found. An account of a man filming himself touching women on the streets, and 1634 people that follow it. A goddamn account of his 'trophies', of every time he's touched a woman's body against her will. Makes me sick to my stomach. I don't know how but can this vile man be tracked down? Anyone? Please share." 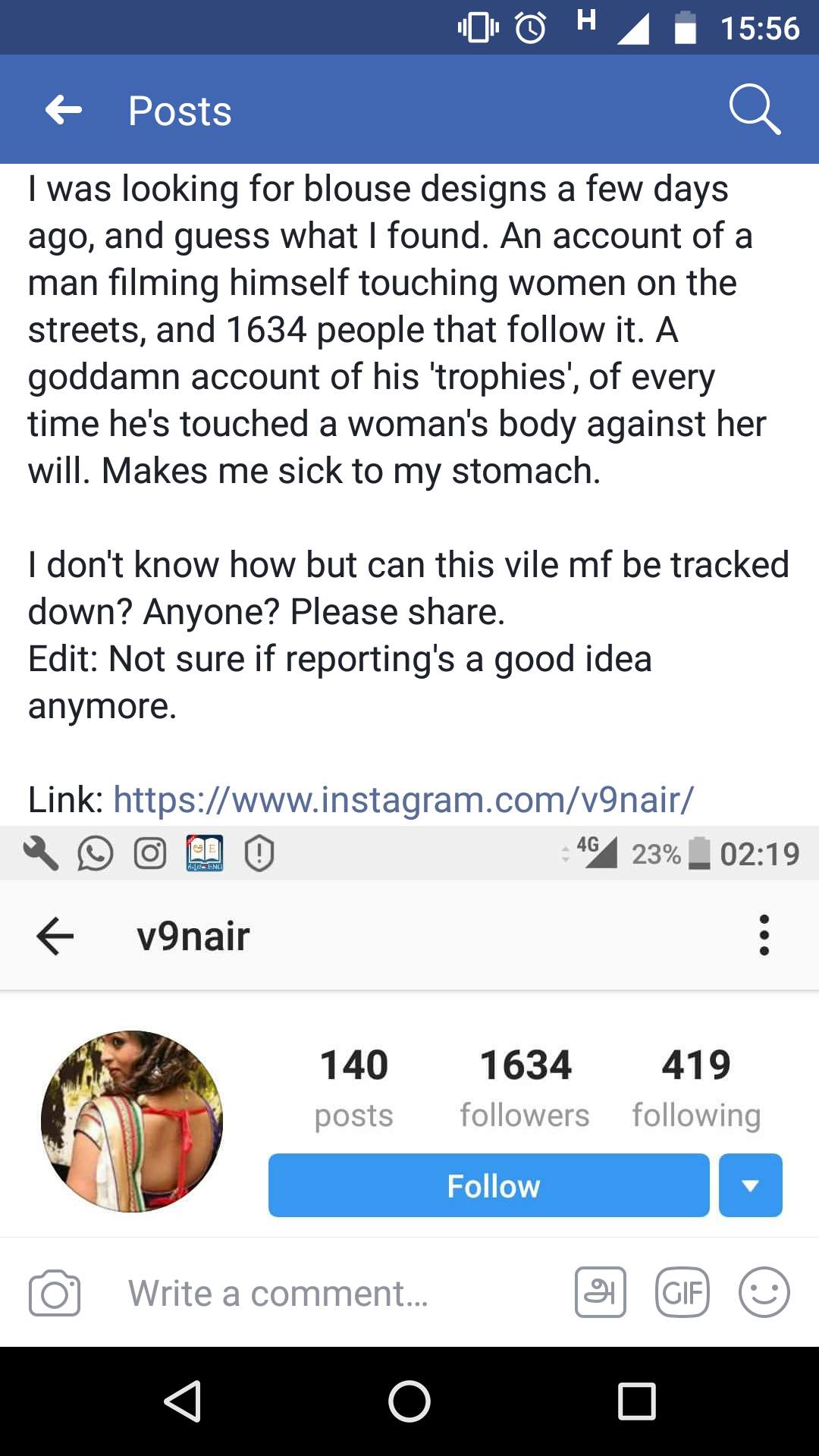 Mini Rao, a psychologist in the city says that most of these Instagram accounts are backed by the user's friends and followers. "They have a lot of support coming their way," says Mini. "It starts at a very grass root level with casual wife jokes and jokes on womenaboutAnd I absolutely abhor that. The more they get support, the more they're motivated to put up such disgusting, horrible videos. We are all voyeurs by nature in several ways. But there are varying degrees to this. Once it crosses this line, it becomes a concern. The person needs professional help." Mini feels that the mindset of a person posting such videos come from several factors like an abusive childhood or a negative experience with parents. "It can stem from anything that person must've gone through at a defining age. But it doesn't justify anything. Especially not taking videos, violating women's privacy and bodies without consent."

Angad Gummaraju, a surgeon who is also in the process of transitioning from male to female says that for every account that is reported and blocked, there's 20 more popping up. "What I do as much as I can is actively report about these accounts/incidents as they happen. It's disgusting," says Angad. "And I suppose with something as seemingly minor as this, most people wouldn't want to create a scene/issue. I really don't know how to handle this."

Anjana Damodharan, a media communications person from World Bank, says, "I think I feel like any person who has undergone unwanted sexual advances feels - I can’t toss this aside and say ‘hey how many profiles like this can I report?’ It is a reminder of every creep who has groped, pinched, prodded, touched or leered at me while I was minding my own business." Anjana feels that social media should have a stricter code on blocking and removing such profiles. "There are several pages like these but they continue to exist despite being reported by multiple people." Anjana recounts how there are pages that have actresses against captions with which person wants to do sexual acts with them. "There are those shout-out pages - a lot of which are just photos of regular women with captions like ‘she has such a sexy navel’ and more lewd things like that. Basically, violating their privacy and using their pictures without their permission."