The year was 1986 when Stephen King published his thriller, IT. The American master author had by then already penned more than 20 novels, breathing life into genres like horror, suspense, sci-fi and fantasy. After a gap of 31 years, Pennywise, the dancing clown from the book, is making his way to the big screen in director Andrés Muschietti’s film with the same title. King’s novels have been made into many blockbuster Hollywood movies, including Frank Darabont’s The Shawshank Redemption (1994), which was based on the 69-year-old’s novella, Rita Hayworth and Shawshank Redemption. Excerpts from an interview:

When you watch a film based on one of your books, like IT, do you find yourself thinking about the changes the filmmaker has made, or are you able to just sit back and enjoy it like a member of the audience?
Both. I look for the changes and I look to see what’s there and what’s not. But I like movies, so I have a tendency to just kick back in the third row with a box of popcorn, and enjoy it as much as I can.

Several generations have enjoyed and been terrified by your novel, It. When you hear from fans, what do they typically tell you about the story or the characters?
A  lot of times they’ll say they got totally involved in the book, and that it made a big impression on them. I got a letter from a young writer, Gabriel Tallent, who is publishing his first book. He wrote that he read It and it sort of got him off the dime, because he liked the expansive quality of the novel. I think many readers have identified with that. They feel like they’re lost in another world and that’s something they enjoy. The first generation of It readers reacted to the book strongly, because it brought back memories of their youth. There are many things in the book that I think a lot of kids have gone through. Those readers, who grew up in the 1950s, reacted strongly to the stuff about the kids, and what life was like back then.

One of the genius things about this film version of It — and it really is a genius film — is that it updates the story, so that the kids are in the 1980s, and if there’s a follow-up, the grownup versions of the characters will be in present day.  People who see the film will relate to the things in the book that are sort of eternal — the bullying, first love, how great it is to be out of school and be away from your parents for a while, and be with your friends. For them, the film’s  setting in the 1980s is what they remember from their childhood.

What specifically did you connect with in the film?
This film really feels like something different and worthwhile on every level. IT isn’t just a horror flick, it has resonance. (Director) Andrés really caught the kids and their friendship.  He captured the reality of kids growing up in the ’80s, and I liked that because I raised kids at that particular time. So for me, it was like a double dip.  The things these kids go through are ones that I related to. When I wrote the book, I set the kids’ story in the ’50s, because that’s when I grew up.

You’ve said that you were a fan of Andrés’ previous film, Mama. Can you tell us what you liked about that, and how does it connect with IT?
Andrés has the same things going in IT as he had in Mama — both movies have a visual lushness.  But that is always kept under control by the storytelling aspect, which is always paramount in this film. It never goes off track, not even once. It holds onto the narrative thread completely so that everything else is just thrilling. You can really sit back and enjoy.
The first thing that struck me about IT was the opening sequence, where Georgie chases his paper boat down the gutter. It looks like a real rainstorm, and not like a Hollywood rainstorm, where there’s rain pelting down, but you can see the shadows and the reflections of the sunlight on the water. The scene has an ominous feel.
Another scene that’s terrific, and wasn’t in the book, is when the character of Stanley Uris sees a portrait of a woman in a Rabbi’s office. It’s kind of a Picasso thing, where the woman has a head that’s sort of on crooked.  When she shows up in the film, it’s terrifying. And when that thing comes out of the frame, it’s really scary.  It’s another one of those times where you realise that Andrés remembers his childhood well enough to know what really scares children.

There’s an old saying in Hollywood that casting is everything. Tell us a little about the qualities that the seven young actors bring to their roles of The Losers, both individually and as a group?
It’s almost eerie how good child actors have gotten. I grew up in an era where they said the lines, looked cute and that was the whole deal right there. But these kids in IT are terrific. I enjoyed them all, but I’ve always had a soft spot in my heart for Richie Tozier. He was the wise-ass that I was as a kid. Finn Wolfhard is terrific as Richie. Andrés must have an amazing ability to deal with kids at a certain level, because the movie rises and falls on them. You hardly see the adults. I think a lot of people who were warped as children by the IT mini-series on television remember Tim Curry as Pennywise. But this film’s Pennywise, Bill Skarsgård, does a great job reinventing the character, who is the avatar of all scary childhood monsters. He’s maybe a little more eerie, a little darker than Curry’s Pennywise, but he’s terrific. The makeup is a little bit different, but it works just as well or even better.

How did you feel when you learned that this film covers about half of your book, and centres on the kids?
I thought it was perfect.  It’s the only way you can do it, so that it will work. The book is like this rock that splits evenly into two parts.

There seems to be a lot of advance interest in IT. The first trailer had over half a billion views, which set a record. How do you explain that?
From the beginning, I understood the film’s potential to break out.  I said to myself, they’re going to get everybody who remembers that miniseries, and how it warped them so badly.  People will come up to me and say, “Tim Curry, you know, I still can’t go near a sewer grate without thinking  about that clown.” At the same time, the film is going to get every Millennial, because they grew up in the ’80s.
Very little of it has to do with the book’s popularity. I could be really generous and say maybe as many as seven million people have read that book. Still, you would not believe how many people have come up to me and said, “That book was the only thing that gave me nightmares when I was a kid.”  So, there’s that.
The other thing that happened is one of these things that you can’t predict: Coulrophobia (fear of clowns) showed up all over the world in the weeks and months before the trailer landed. There were people who saw scary clowns on roads in Kansas and in England and everywhere else. It was just meant to happen.

A lot of your work deals with faith. What role does faith play in this film?
Well, there are books that I’ve written that deal with faith in God as a power of good to counter balance evil. The faith in IT is about the faith that you put in your friends. It’s about friendship under pressure.

You mean, friendship is the principal weapon against Pennywise.
That’s right! It’s stated in the movie, where one of the kids says something like, “He picks us off one by one.  He’s stronger than us. But when we’re together, we have this bond that’s stronger than him,” which is what makes the final image of the film so effective. Andrés Muschietti is a huge fan of your work.
He’s somebody else I warped as a child (laughs).

He knew it was impossible to include everything he loved in the book.  But he does offer some “Easter Eggs” — clues that the book’s devoted fans will recognise.  Did you spot some of them, and if so, what do you think of them?
I saw some, and I understand that they’re little homages, and I appreciate no end. It’s a way of saying, thank you for the stories and for the entertainment, and I like that.

This is a big time of the year for you, in terms of filmed adaptations of your work. In addition to IT, there was the big-screen adaptation of The Dark Tower and Mr. Mercedes on TV. Have you experienced anything like this before, with Hollywood adapting your work in such proximity?
No, never. It’s like having everything come out of the oven at the same time. It’s crazy, but it’s nice. There are also the movies Gerald’s Game and 1922 coming soon, as well as a television series Castle Rock, from JJ Abrams. Then there’s a book I wrote with my son, Sleeping Beauties, which will be out soon. We expect to tour it on a wave of good feelings, knock on wood, because I think people are going to like IT very much, and there’ll be a lot of talk about that.

Will fans enjoy the movies as much as the book?
I think my fans are really going to enjoy the movie and I think that some of them will go back two or three times to actually enjoy the film.

How did the idea to pen down Pennywise, the clown come about?
When I wrote the book, I thought to myself that I have got this reputation as the horror novelist, so IT will be my final exam. I decided that I’ll bring back all the monsters that I remember from my childhood, the ones that I grew up with — Frankenstein, Dracula, Wolfman, the thing from beyond the grave — because the entity that is Pennywise focuses on whatever that particular child fears the most. For me, the important thing is that they’ve kept the core idea that Pennywise gets to the kids by finding out what they’re afraid of and being that thing. 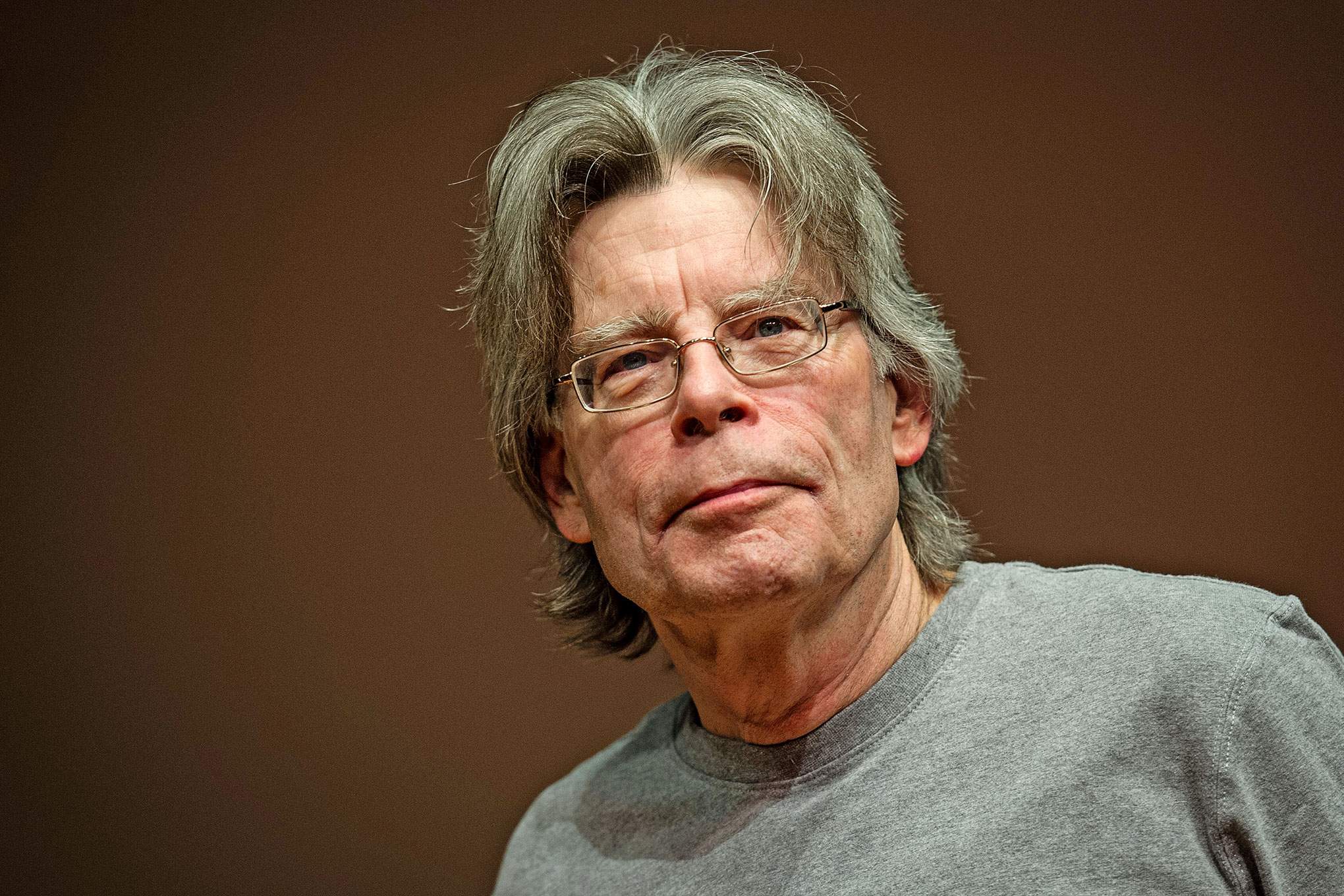 What was the thought behind the other characters?
One of the things that I wanted to do in all my novels was to create characters that are fundamentally decent by and large, and in that way, you don’t want them to be a spam in the cabin. You don’t want them wiped out, you want them to live and win. And I think that translates to the film. That’s one of the reasons. I really like this movie.

What are your expectations from the film as an adaptation of your novel?
I had strong hopes from the movie because I had seen Andrés’ work from Mama and I thought he is a really talented director, and I also love the idea of concentrating on kids.

Is Bill Skarsgard the perfect Pennywise?
Bill Skarsgård was great, and let’s face it, he’s got big shoes to fill, because people like Tim Curry as Pennywise, the clown, and they remember the look that he had.