Designs that grab you: Gender fluidity is the new fashion buzzword

As gender fluid clothing appears to be redefining contemporary aesthetics, with the likes of Arjun Kapoor sporting cowl-necks and draped pants by Antar-Agni, and Sushant Singh Rajput walking for Shantanu and Nikhil clad in a cascading draped kurta, we dig a little deeper into the fashion phenomenon.

Ever since the legendary designer Coco Chanel rewrote men’s suits for women in the 1920s and the French designer Yves Saint Laurent launched tuxedos for the fairer sex in 1966, there haven’t been many notable changes in the form and content of gender fluidity in fashion. While the narrative has not undergone much change over the years — male silhouettes on women continue to be the norm as opposed to female fits in men’s closets — the trends that define it are beginning to evolve, between celebrities, supermodels, designers and common folk.

At the last season of Lakmé Fashion Week Summer/Resort 2017, the spotlight was on the models. Czech-based Petr Nikta became the first gender-neutral model to walk the LFW runway at Mumbai in January, while closer home Chennai-based photographer Ganesh Toasty captured a perfectly done-up self-confessed drag queen, Lemuel Huffman — red lipstick, high heels, etc — in his photo series titled Suis Generis in March 2016. Now, the mantle seems to have shifted to the designers. Creating neutral lines since his label Antar-Agni’s launch in 2014 (Lakmé GenNext), Ujjwal Dubey’s collections have avoided stark differentiation in silhouettes between genders, with draped garments being the brand’s forte. This time around as well, Lakmé GenNext designer Sumiran Kabir Sharma Chawla showcased a collection of “genderless silhouettes representing collective strength and a call for identity and respect” at the recently concluded LFW Winter/Festive edition. 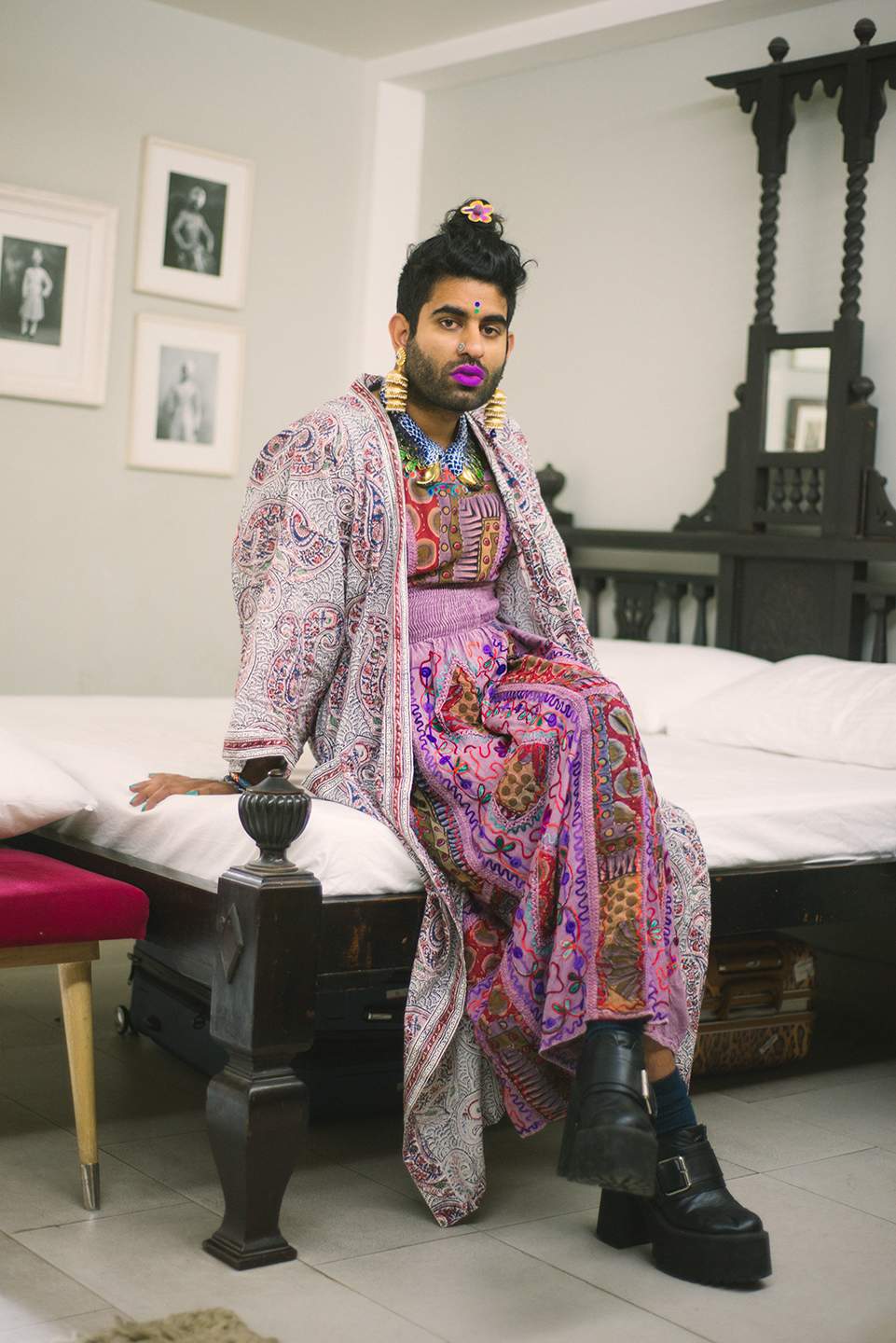 When a cisgender couple, Gigi Hadid and Zayn Malik, were made the face of gender fluidity by Vogue, rather than someone who did not identify with a gender binary, people the world over were appalled. The couple who were quoted saying, “It’s not about gender... It’s about, like, shapes. And what feels good on you that day...” were called out for reducing the idea of gender fluidity to “shopping in each other’s wardrobe.”

But if swapping clothes did not qualify as gender fluid, what does? Texas-born Alok Vaid-Menon, a gender non-conforming artiste, writer and social media influencer prefers the use of gender-neutral pronouns “they” and “them”, to begin with. Known for his pivotal role in the spoken word performance Dark Matter with Janani Balasubramaniam in 2013, which was based on queer/trans-South Asian themes, and then in the 2016 HBO documentary, The Trans List, Alok says, “Fashion is a great entry point, but it’s not the end-all-be-all. Gender non-conforming fashion makes people do a double take and ask, “What’s going on here?” My hope though is that people will go all the way — not just admiring and celebrating gender non-conforming aesthetics — but also understanding the real political issues and experiences of gender non-conforming people.” 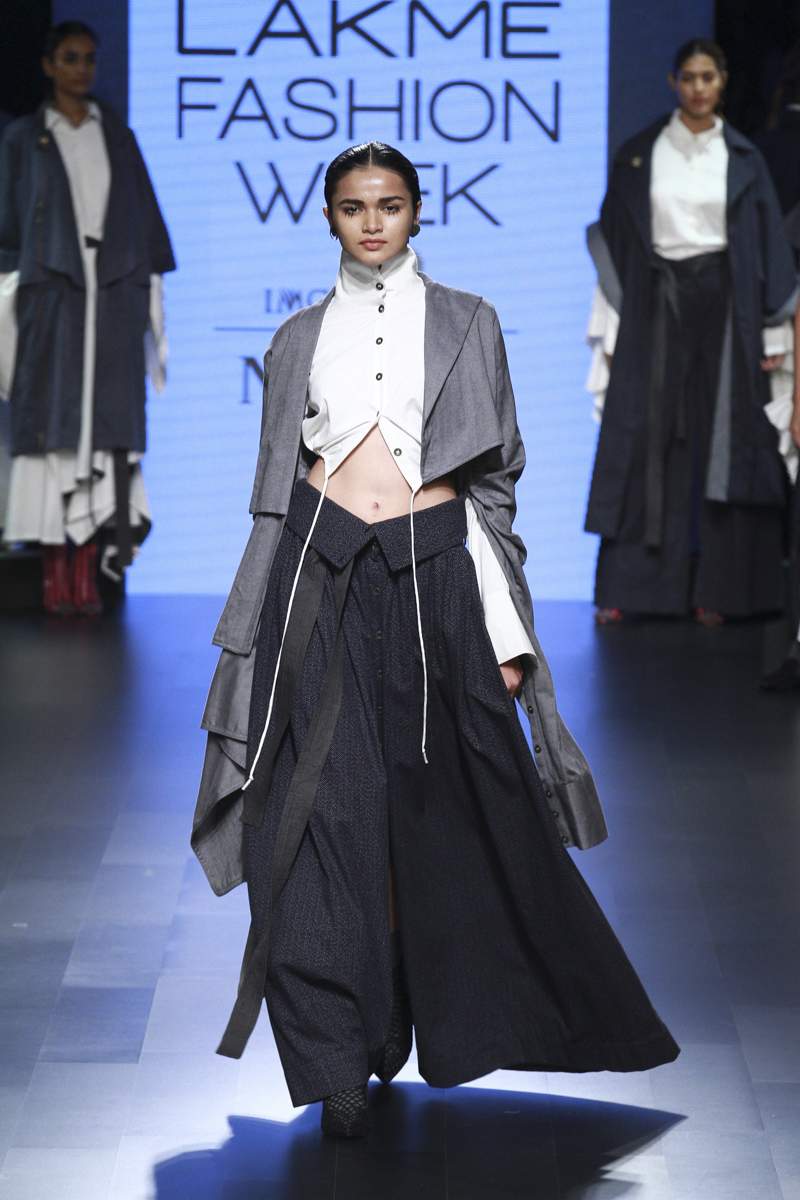 For Mumbai-based label Chola by Sohaya Misra, it is the allure of freedom that ungendered clothing presents that has the designer creating “aesthetics that are for all and do not conform to age, size or gender.” Patronised by the likes of actor Ranveer Singh, the womenswear brand also recently saw its white cotton bishop sleeved shirt, with a stitched ruffle detail, on model Arjun Menon for a menswear fashion editorial in June. The two-year-old label, which showcased on Day 2 of LFW Winter/Festive 2017, presented its latest collection, One Love. One People. One Planet, under the #RestartFashion banner featuring asymmetrical shapes. “We employ free-cutting methodologies in our designs, and so it is liberating to be able to design without any preset conditions or barriers in mind,” shares Sohaya. Ideal for the Autumn/Winter season, the collection saw shades of brown, deep khaki, maroon and black on shirts, draped pants, slashed jackets, wide trousers, paper-bag-waist skirts and tiered frilled long pinafores. Resham Karmchandani, co-founder of The Pot Plant interprets the gender-neutral concept differently. While their signature long shirts, kurtas and comfort fit pants were a part of the LFW Winter/Festive showcase, it was the vibrant patterns and earthy colour tones that had the duo excited. By leaving the styling of her clothes open to the wearer’s interpretation and expression, Resham believes that the idea of fluidity can never be reduced to a mere aesthetic.

As one among a new breed of designers starting a new vocabulary for gender-neutral clothing, The Pot Plant’s design sensibilities come from the childhood memories of founders Sanya Sui and Resham. “Both Sanya and I grew up wearing beautiful hand-me-downs, no matter who they belonged to. I have been borrowing — never to give them back! — my father’s t-shirts and kurtas for ages now,” she says, with a laugh. While her childhood memory would be commonplace in most households, the designer wants to prove a simple point: gender-fluid clothing has never been a radical concept in India. “Drapes have been so common in India, it is the essence of our clothing. Something like a kediyu which is considered feminine today had no gender originally!” 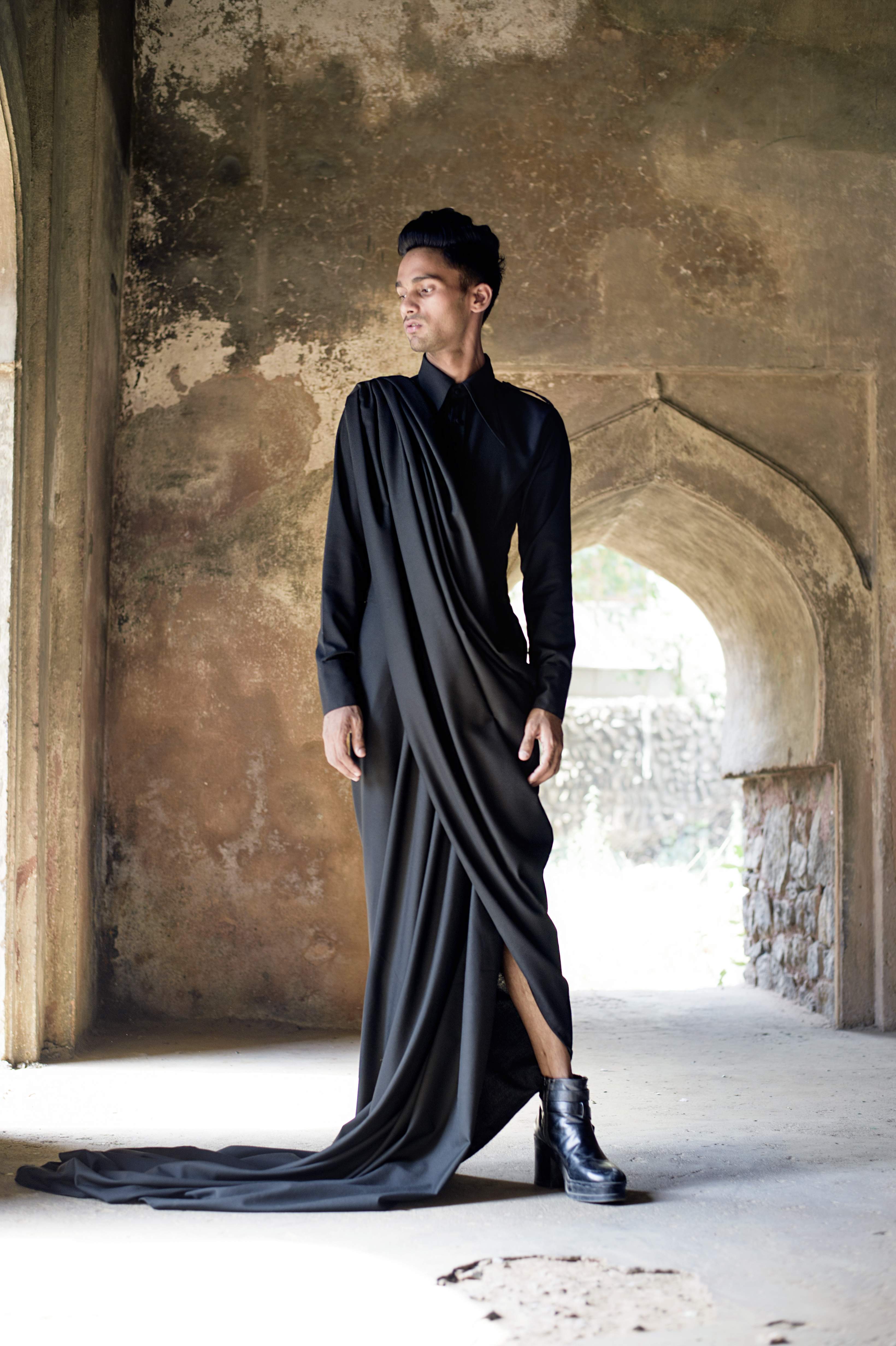 This naturally invites the question: if gender-fluidity has existed throughout history, with even Indian royalty wearing angarakhas and floor-length jamas, has mainstream fashion changed so much that today there is a stigma attached to men wearing what is considered effeminate clothing? Chances are, if you show a man in a draped outfit with a train (see inset), the first thing that will come to mind is a man in a women’s gown. Such is the power of associative thought. Calling himself a silhouette generation artist, Sumiran Kabir Sharma Chawla of Aanam believes that androgyny and genderless clothing have a very close connection. “It’s not about androgyny ending but blending itself into genderless silhouettes and forms. When I work, the inspiration that comes from the drapes and the concept are the major focus. Everything revolves around it. For me, androgyny leads to gender-less or no gender clothing.” His line of clothing, which can move seamlessly from 'his' to 'her' wardrobe, finds a combination of capes and jackets, wrapped skirts, draped hem kaftans and a maxi with a trail and shoulder drape, all in a palette of black and grey. 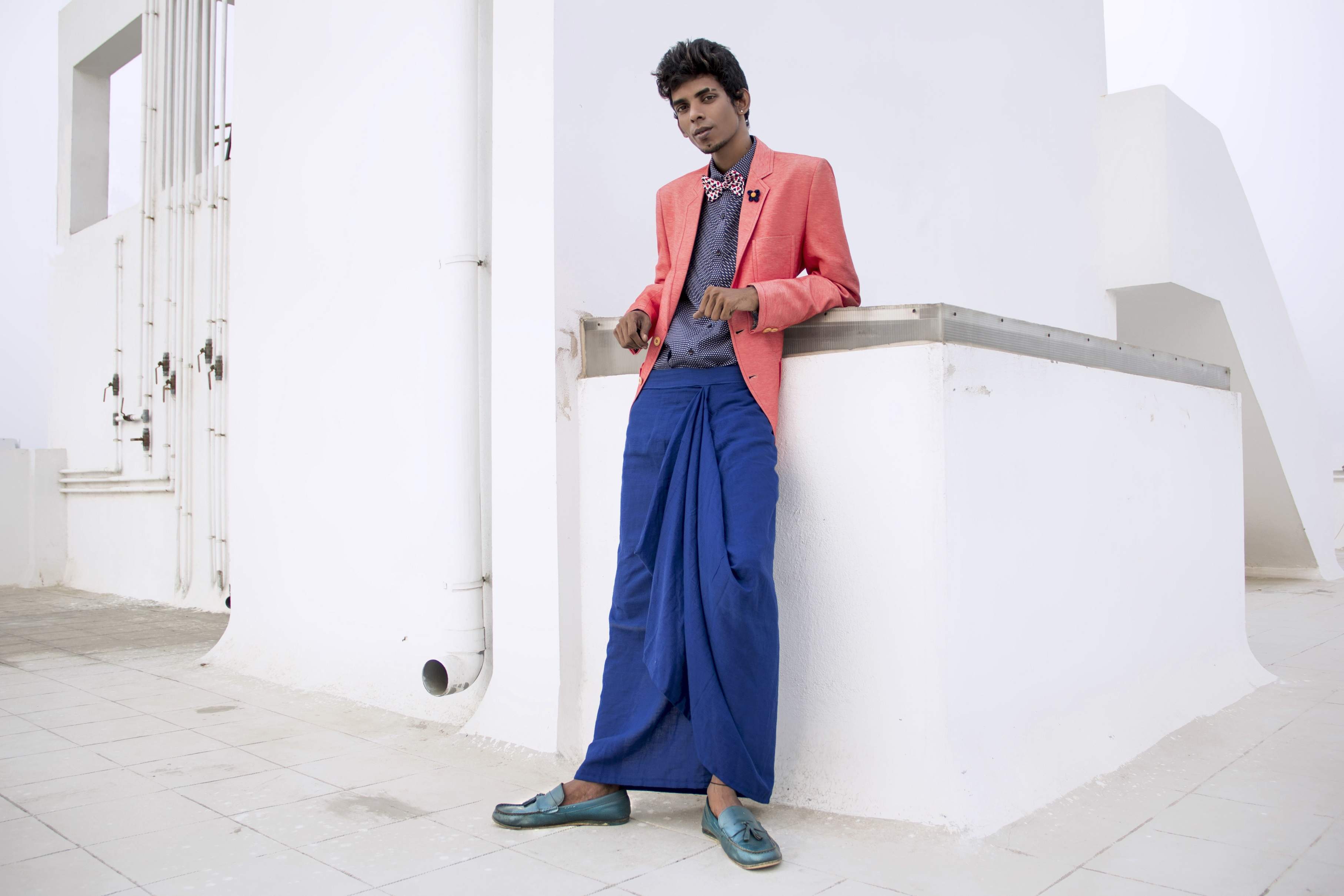 In 2016, the idea of gender-fluid fashion found expression in Chennai-based designer Purushu Arie’s eponymous label. Helming the country’s first gender-neutral label, the 26-year-old ensured that the delineation of androgyny and fluidity does not intersect in his creations. “The two terms are closely linked and often used interchangeably in colloquial usage, just like the terms ‘gender’ and ‘sex’. However, androgyny refers to a combination of masculinity and femininity whereas gender fluidity simply means that the person’s gender expression is not absolute. As far as my design aesthetics are concerned, they’re gender blind or gender neutral.” Set to unveil his Autumn/ Winter 2017 collection shortly, Purushu’s statement piece offerings are a lungi skirt, dhoti trousers and lungi pants.

Signs of the times 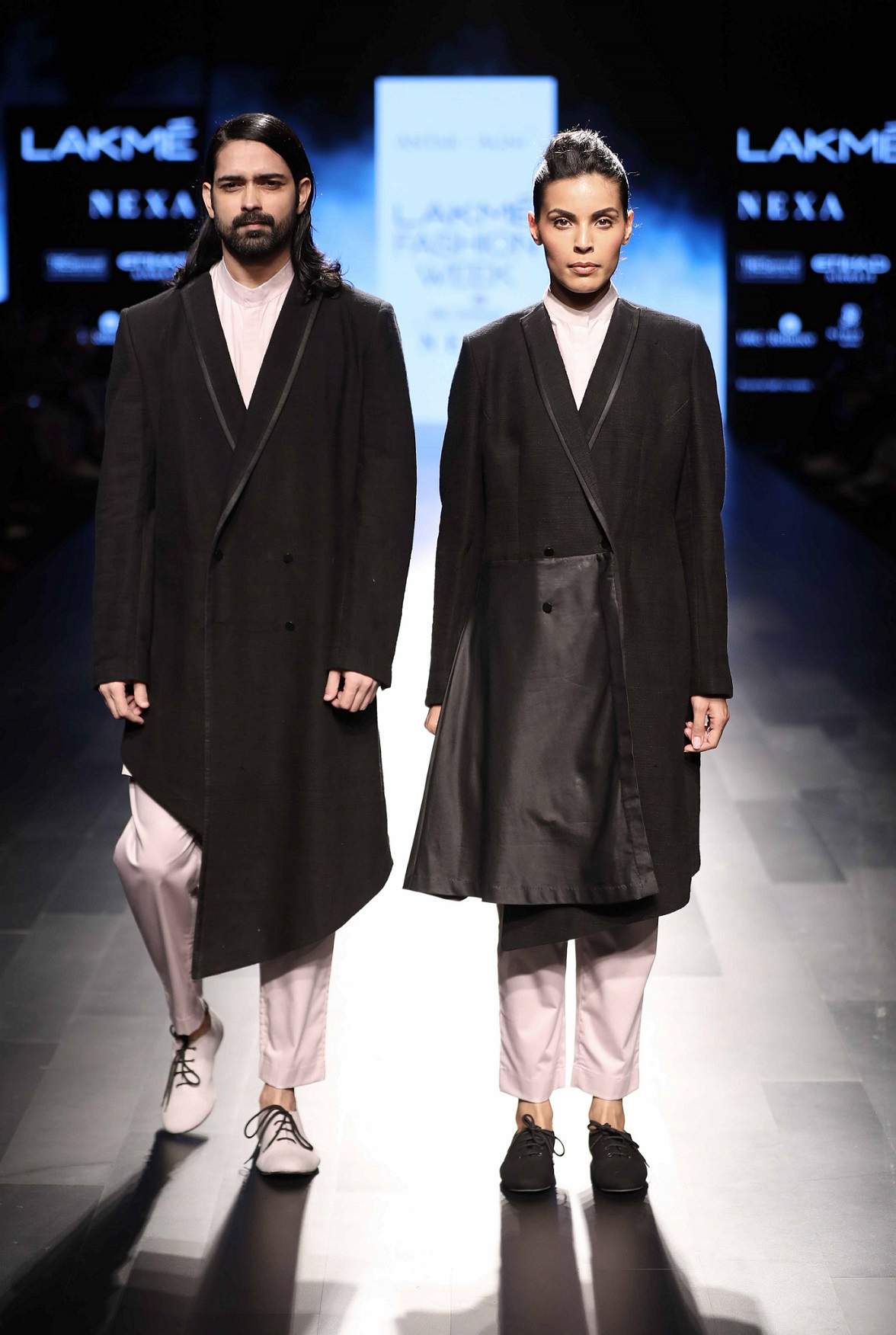 While the Vogue cover of the couple did land Gigi Hadid and boyfriend Zayn, who “channelled their alter-ego” in a Gypsy Sport sleeveless jacket and Marni top and a peacock print Alexander McQueen suit, in quite a bit of unpleasantness, the world woke up to the fact that fashion could be critical and could move people. While high fashion and couture may be considered to be objects of only the runway and not everyday life, they do contain seeds of social change. “I think such stigma only arises when we unnecessarily assign gender identities to products. Today, even hipsters measure their masculinity by the length of their beard and don’t think their skinny jeans or beard grooming cosmetics are feminine,” shares Purushu Arie. 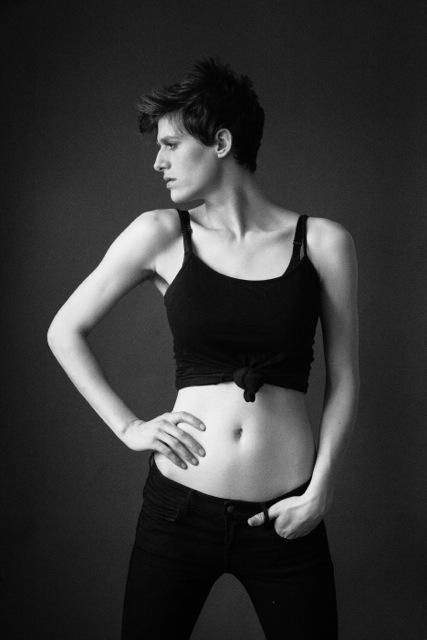 In the last few runway previews around the world, designers from the likes of Thome Browne to Alessandro Michele have shaken up sartorial views of who should wear what. So one would guess in such a scenario that the West would earn the title of creating socially conscious fashion. New York-based androgynous supermodel Rain Dove might disagree. Standing tall at six feet two inches, the model who made her debut on the New York Fashion Week runway in 2015, showcasing both men’s and womenswear, boycotted the Spring 2018 edition as an answer to the memo issued by US President Donald Trump for “Women to dress like Women” in the White House. Shot as an Instagram video response in collaboration with Tomboyx, the 27-year-old says, “Nothing will ever suit a person better than being exactly, no apologies, who they are born to be.”

Rain Dove, who has walked for designers like Malan Breton, Jackson Wiederhoeft, Calvin Klein and modelled in Chanel’s editorials, echoes what Texas-based artiste Alok-Vaid believes, “It is so arbitrary and reductive to gender colours, fabrics and cuts. But as a start, explicitly stating ‘This clothing isn’t for one gender’, I think gives people permission to experiment and try new things.” But gender fluidity in fashion cannot be just a one-off campaign or a runway trend, cautions Rain. “It cannot just be a gimmick of putting what we consider a ‘woman’ in a suit or what we consider a  ‘man’ in a woman’s dress. It is about saying this product is for anyone and we will not dictate what we think is ‘acceptable’. It shouldn’t be a cause for shame or social status. It’s just fabric. Skirts or pants — whatever you choose to wear should be a choice you aren’t afraid to wear.” 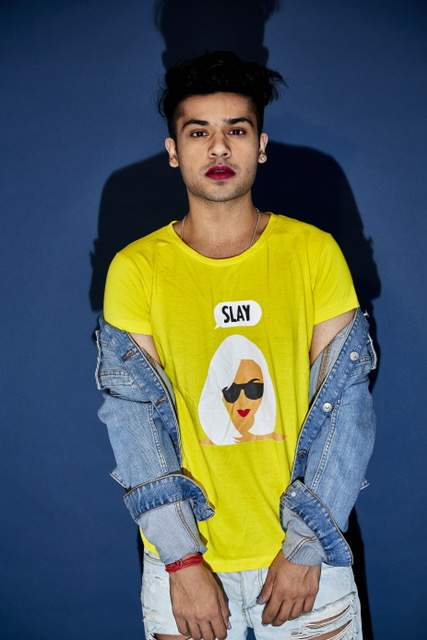 While floral-printed shirts, palazzos and pink shorts are some of Instagram Influencer and blogger Akshay Sharma’s favourites, the 22-year-old NIFT student swears by lipsticks and nail prints. Understated yet dramatic, nail paint has also been associated with rock music, with the likes of Freddy Mercury known to sport dark nails. “I believe this also challenges assigned gender roles,” says Akshay, adding, “Dark shades are always a good start.”

For options to work with, make a statement with a scarf or dupatta, suggests celebrity stylist Nitasha Gupta. “These are pieces of clothing that are already worn by both men and women.” Additionally, “long skirts are also a good intermediate between pants and draped Indian garments like dhotis or lungis.” 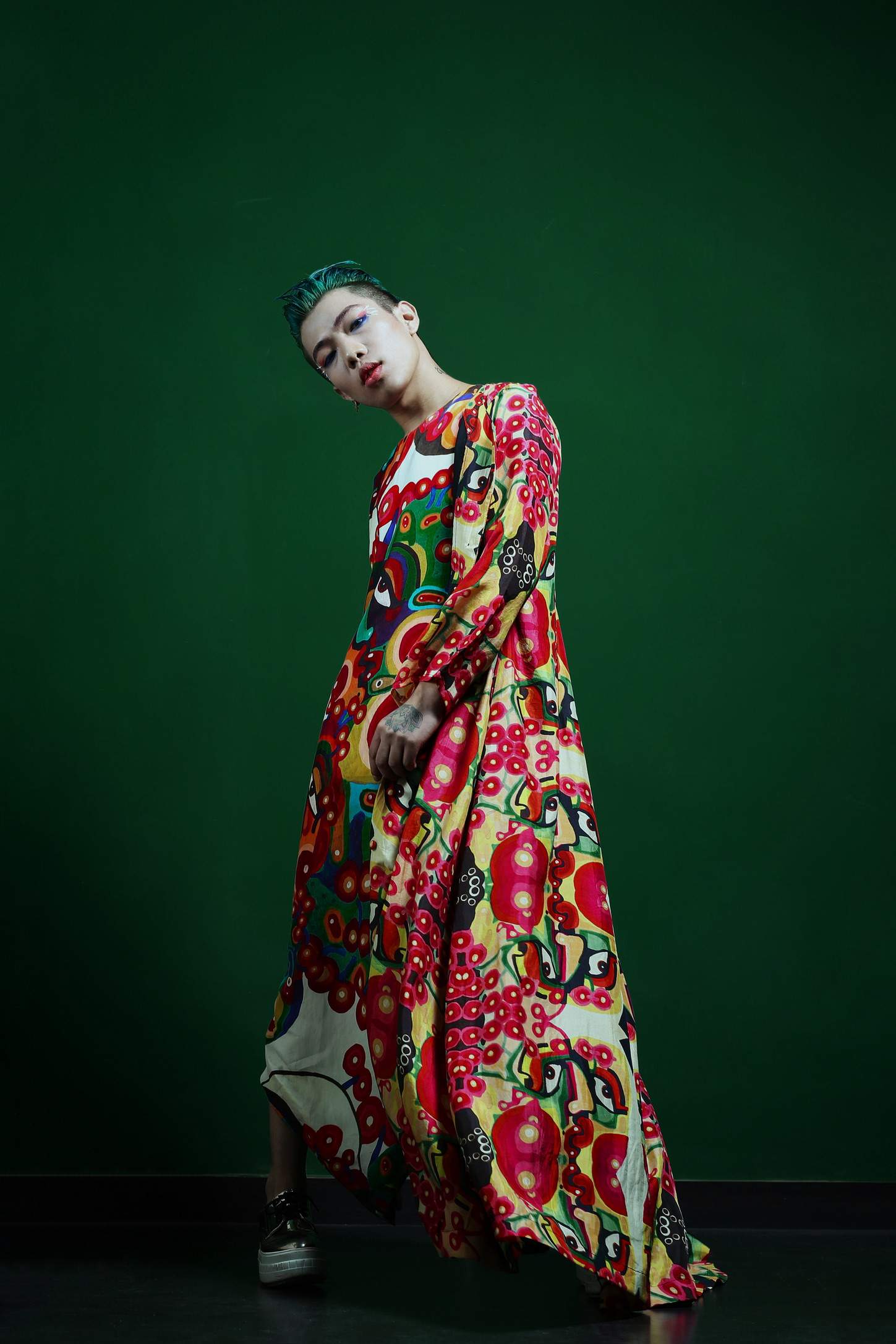 “Fashion is an easy access point to showcase what you, as a person, believe in,” says Joan Dominique Rai, a design associate at Sabyasachi Couture in Kolkata, who has also modelled for labels like Bobo Calcutta. While refusing to bracket a particular silhouette as gender-fluid, Joan (23) believes that the right accessories can make an ensemble ungendered. “Chunky heels and gladiator sandals are my favourite go-tos.”

- With inputs from Anuja Premika