All aboard the chug-chug train: The real Oktoberfest in Munich

While planning a visit to Germany, we have to be picky about the time and places to visit. My visit to Germany was planned to coincide with Ocktoberfest, an annual folk festival in Munich, where the largest congregation of beer lovers gather. Inaugurated on September 16 by the Mayor of Munich, the 200-year-old festival is set to  run until October 3. It was a wise decision of my host to park his car on the outskirts and take a bus to reach Theresiewiese, meaning “Teresa’s meadows”, as we might have, otherwise, ended up wheeling down the city roads the whole day, trying in vain to find a parking slot. 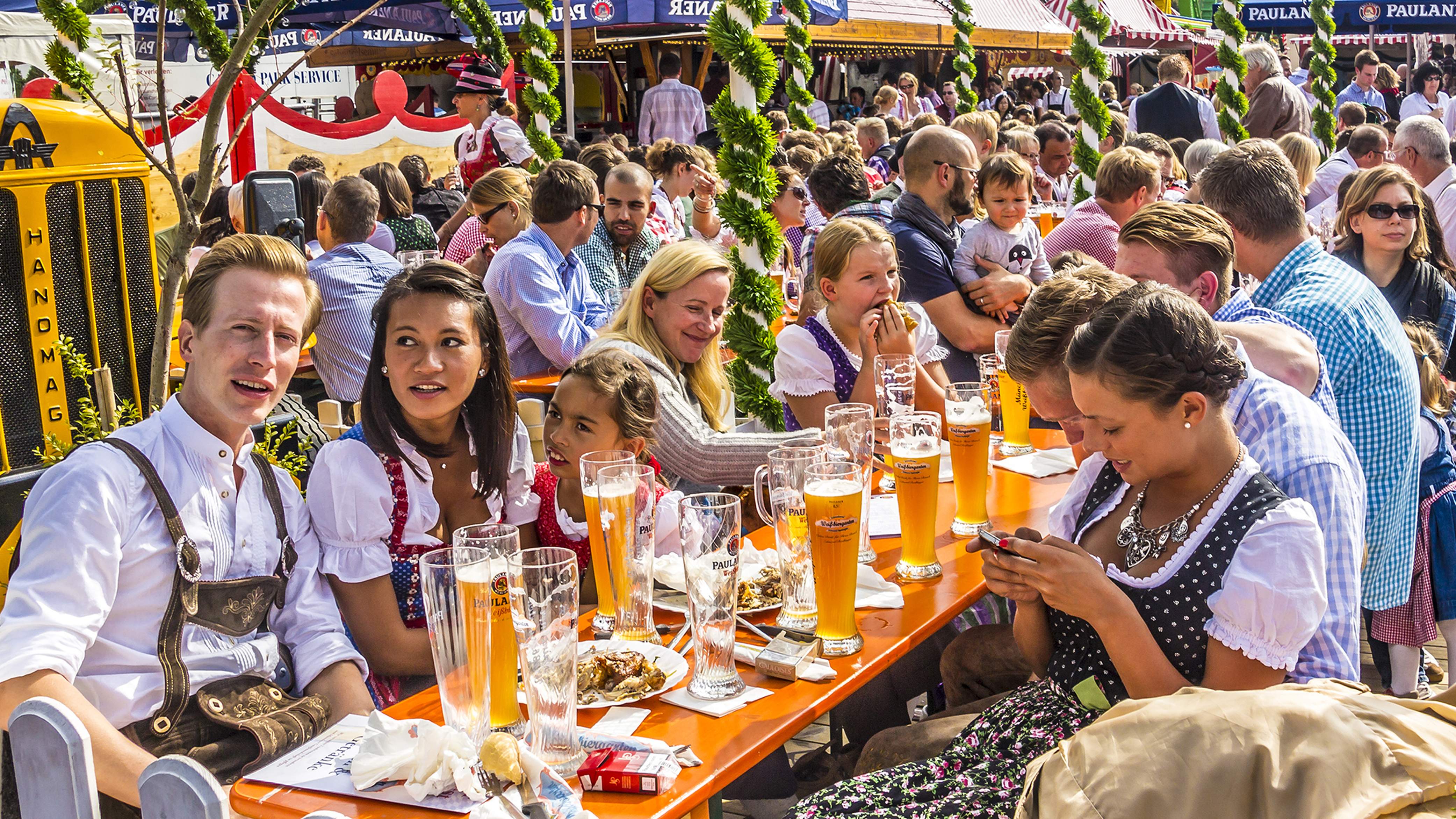 The festive mood catches up instantly as we stroll through the maze of streets, as  the city is thronged by horse carriages, unending colourful parades and folks in droves arriving in bright costumes with wide hats and long boots, exchanging season’s greetings with warm hugs. It is truly the folk spirit all the way. We decide to trail a richly decorated horse carriage helmed by people in traditional costumes hauling freshly brewed beer in barrels to the fair. 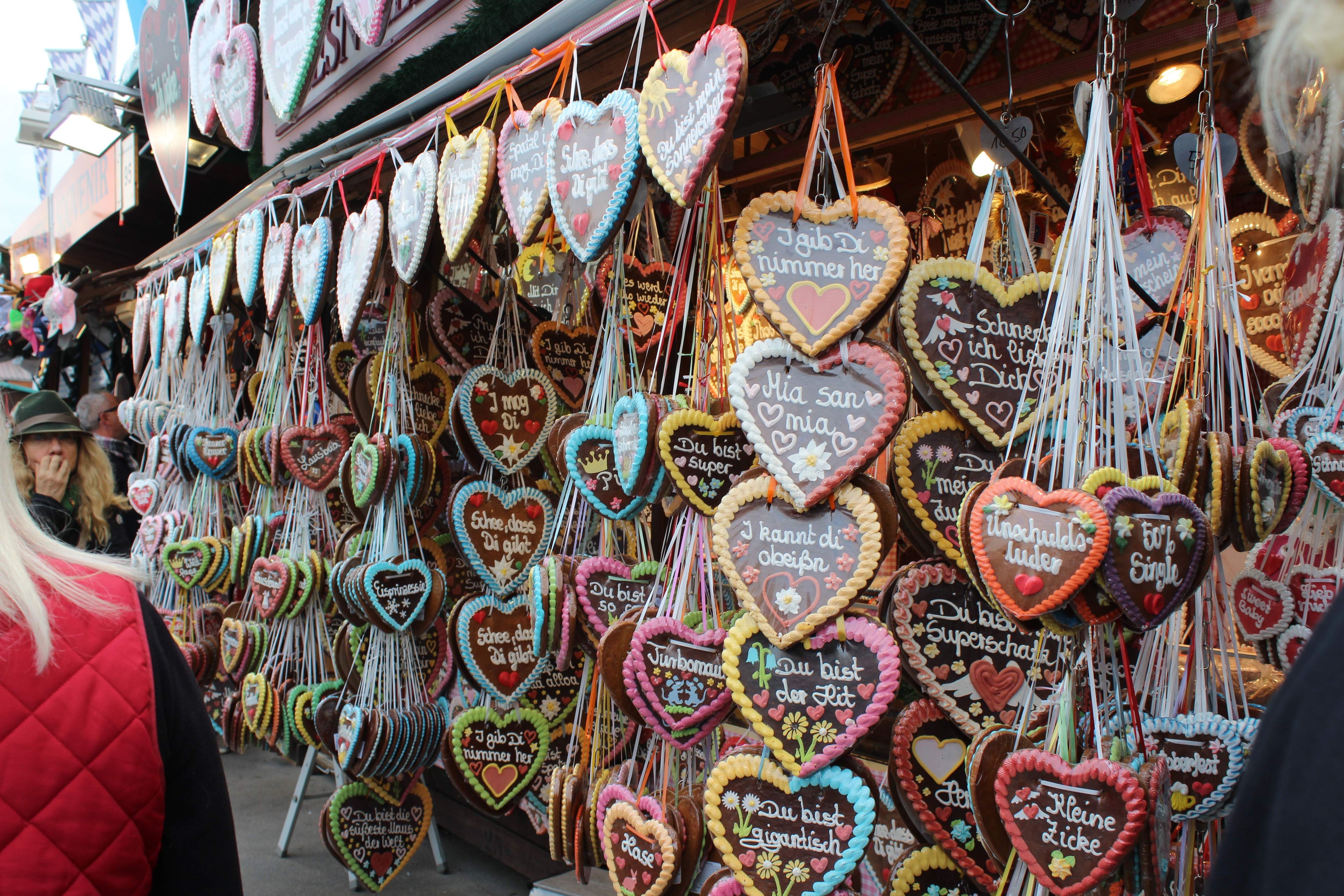 The traditional “tracht” costume has assumed a lot of fashion currency, I find, with the tight-fitting “dirndl”, the upper portion of the female costume, getting minimal by the day. I gleefully capture the verve of the proceedings through my Sony lens. Intending to mingle with the locals, we stop by a shop looking for the traditional costume before the folk grounds and give up the idea for its high price (approximately around `6,500), but settle for a Bavarian hat. Inside Theresiewiese, or the “Wiesn”, in short, the place of the18-day carnival, the atmosphere looks jazzy — the pomp and glitterati that is on display seems anything but folk. 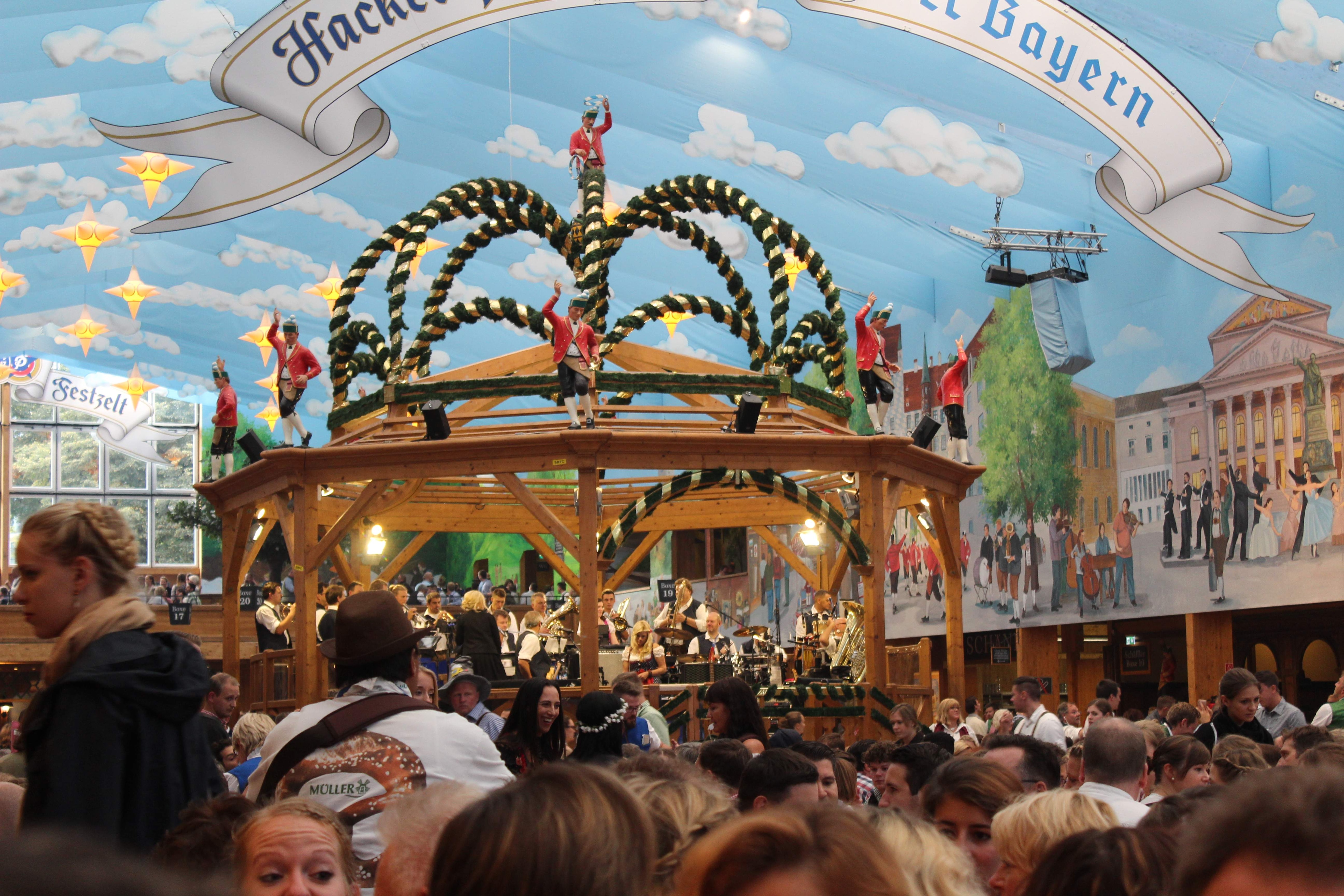 The big tents, the massive roller coasters and assorted food items suggest the shifting intent of the festival over the years.  Near the security post, departing guests patiently wait in a long queue before a facility to check alcohol levels. The euphoric mood at the festival lends the impression of an entire beer tribe having descended here, partaking of the Bavarian revelry, quite like an age-old family gathering. Skipping the thrill rides and street food, we quickly head for the tents that are under siege of constant clinks from mugs filled to the brim. 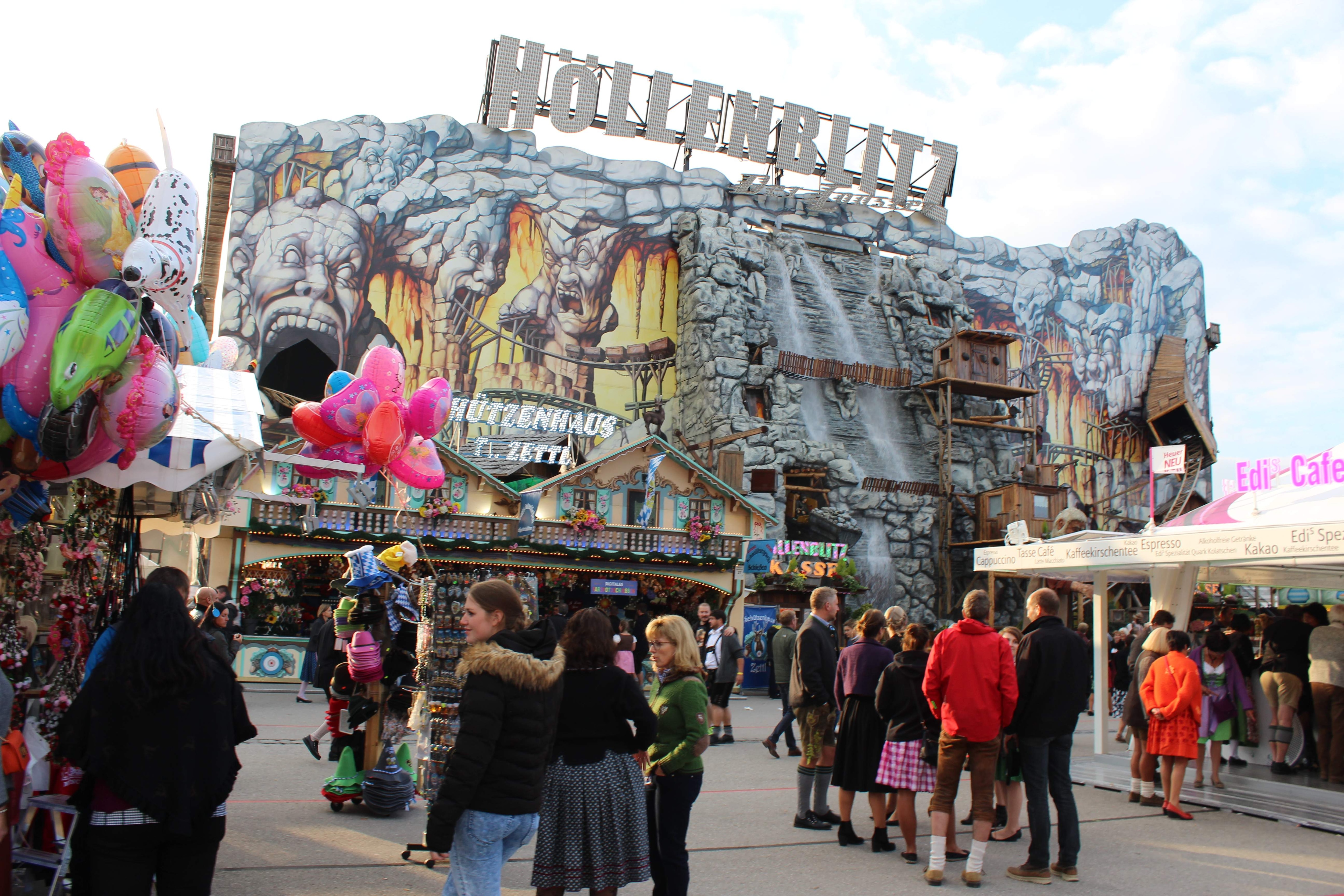 With no one to assist us, we spend nearly an hour waiting, watching silently as the unremitting flow of guests keep pouring on the beer, non-stop. A bartender, probably sensing our outsiders’ helplessness, eventually guides us to an elevation and seats us on tables reserved for the evening. The swelling crowds, held together in garrulous conversation and belly laughs, doesn’t appear to have an ear for the music, which seems to fall flat in the din. Intriguingly yet, a wave of applause erupts in frequent intervals. It’s amazing to watch the women bartenders carry six to eight mugs of beer tucked between their arms and chest without spilling a drop. The merriment of the festival grips me instantly, as I begin to sip on the frothy beer surging upto the brim in each mug. After about six hours through three servings in the midst of the great gala, I’m convinced that the festival is a perfect tribute to one of the world’s most loved brews. 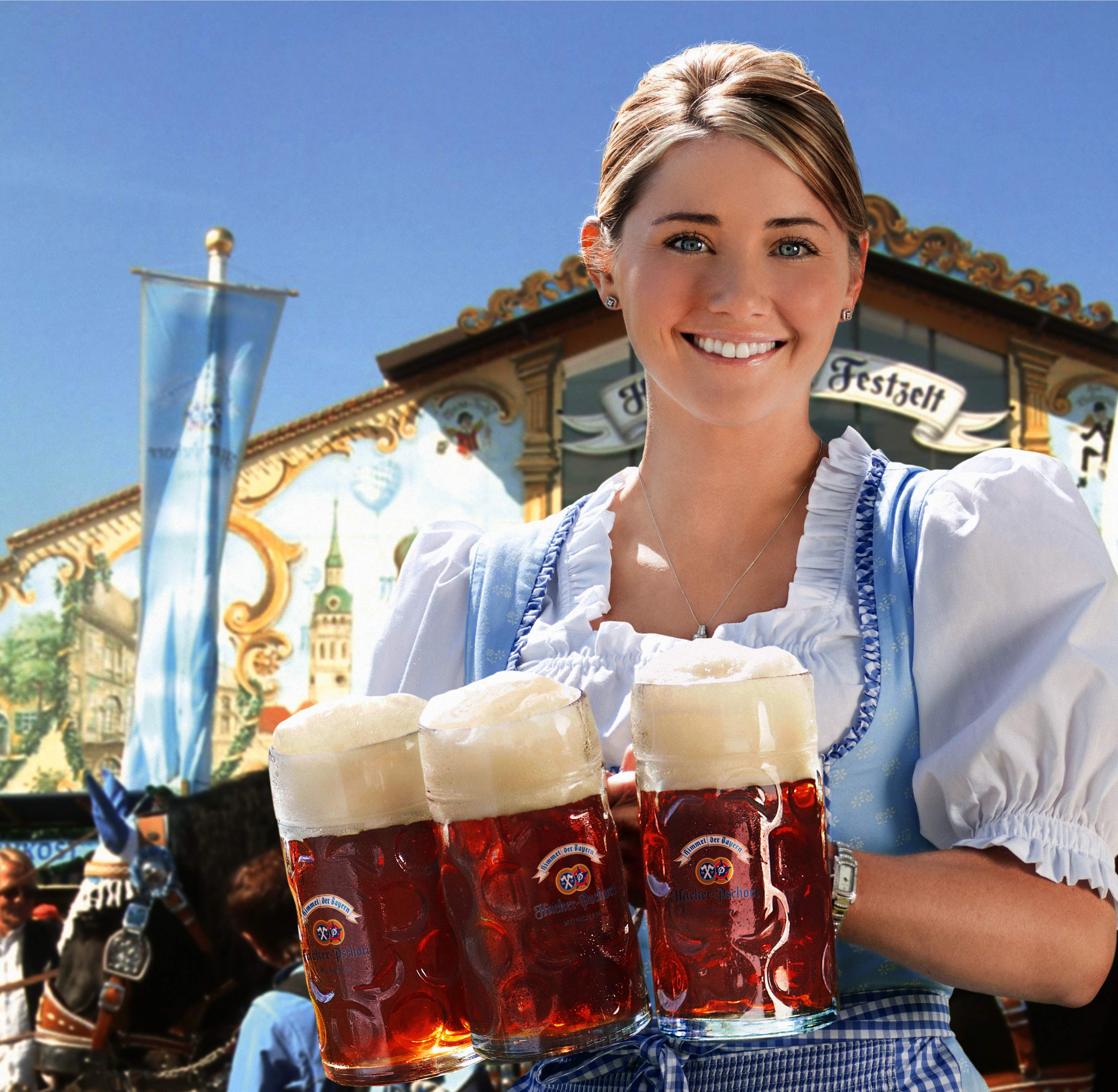 Of wines & wheels
Stuttgartens love to hang out with friends in the rustic confines of vineries over the hills and dirt their boots, for a pastime. Another day, on a different circuit and the second leg of our tour. With the beer binge done, the wine cannot be left behind untoasted. The road to Stuttgart, known as the auto hub of Germany, sports large tracts of grape and apple farms. We stop at least a dozen times to find spots that allow us to be in solidarity with nature in its purest form. A common sight is of students and office-goers lending their hands in the wine fields after work. After consuming all too many shots, and capturing the picture-perfect landscapes, we reach the city by noon. Our host cautions us of long strolls through the wineries and suggests a lunch break at a tiny restaurant, where we get some pizza. On moderately sunny days, Germans do what they love the most – go hiking. I see a lot of hikers spilling over on the streets – the singles on foot and families on cycles, with trailers attached to seat babies. Stuttgart is bowl-shaped, and I soon realise that it is easier to reach places by foot rather than drive a cab over the winding roads on its periphery. We wait for the winery tour guide to pick us up from the suburb of Oberturkheim,  next to the Stuttgart main station. We descend through the scenic pathways to reach a charming village called Ulbach, known for wine specialisation over 500 years, where we stop for wine tasting in a local restaurant. Teetotalers, be assured, zero-alcohol wine is available here. The tour spans three hours and culminates at a Rotenberg mountain where a mausoleum of Queen Katherina is erected. The walking tour makes for a perfect holiday sojourn, offering a complete break from stereotypical travel packages. 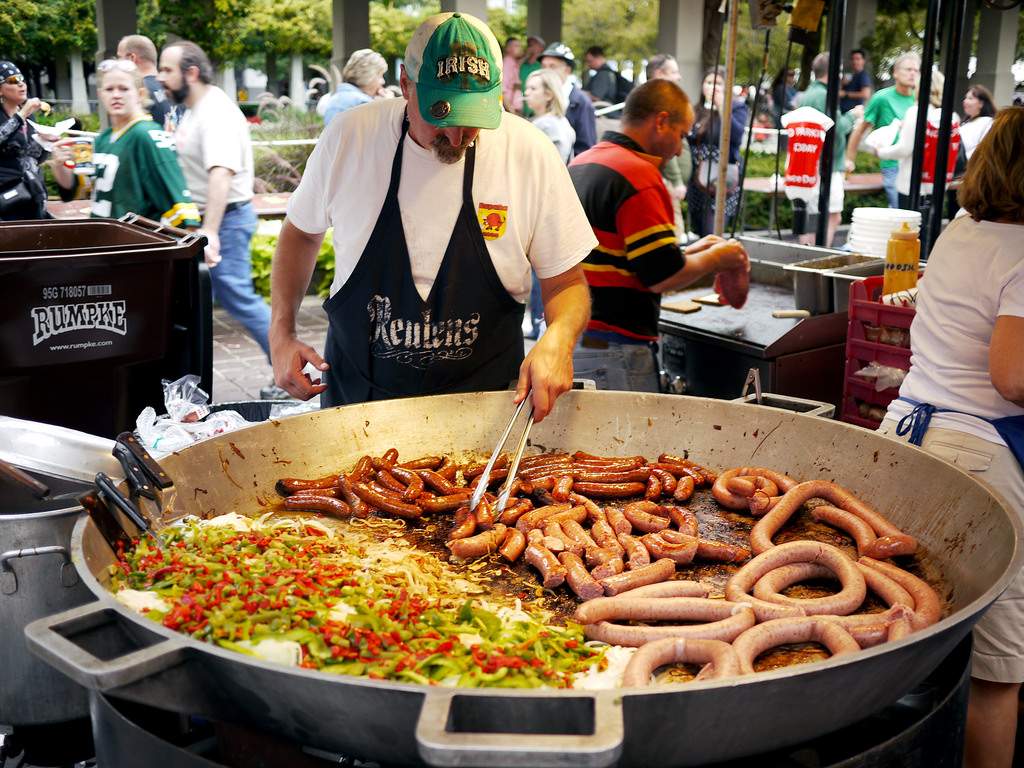 We have sufficient time to head back home and we decide to visit The Benz museum. Designed on a cloverleaf concept, the museum is an engineering marvel in itself and documents the timeline of 125 years of pioneering work by Gottlieb Daimler and Carl Benz. The museum has two categories: the Legends and the Collections. The guide leads us through the evolution of the Benz from wooden carriages of single horsepower to supersonic race cars, and halts before a flambouyant custom-made car in dashing red, insisting that we take a few snaps of the vehicle. She goes on to reveal that the car in question was once owned by the Maharaja of Kashmir. And we’re left wishing that we had a few rounds of beer to raise a toast to our genial hosts.

FACT FILE
How it happened: Though named Oktoberfest, a major part of the festival happens in September and concludes coinciding with German Unification Day, on October 3. The festival dates back to the 19th century wedding of King Ludwig I to Princess Therese, which took place on October 12, 1810, when locals were invited to celebrate the royal event. The festival gradually evolved into a beer drinking party, besides sporting horse races, tree climbing and bowling alleys to add some glamour to the event.  Presently, quality event management and modernity have taken over with theme-based parks, mechanised high-speed rollers and twisters, and a variety of foods catering to tourists arriving from Australia, New Zealand, Italy, USA and Canada.

Calendar: Oktoberfest 2018, to be celebrated in honour of the royal wedding, is sure to attract beer lovers and tourists from across the globe. Starting on September 22, the festival will begin with the Mayor of Munich declaring, “O’Zapft is!” (It is open). The festival heralds the grand entry of landlords and breweries. The Oktoberfest costume, Rifleman’s parade and inauguration by tapping the pipe, mark the occasion. The festival lasts for 18 days and ends on October 7. Each day has a different event to kickstart the celebrations. There are family days too, when rides cost lesser than usual.

The tents: There are several tents of varying capacity to choose from. The bigger tents house up to  9,000 guests while the smaller tents house about 100 guests. Entry to the tents is free as such, but reservation makes things easier, as is served only to guests with seats. The tents follow a similar pattern, serving beer and food accompanied by a live music band, but makes a distinction with the fun elements and food on offer. There is a strict regulation for the preparation of beer using water, hops and barley, with alcohol limits of 6% and a total ban on smoking. At Oktoberfest 2016, a “mass” or 1 litre of beer was sold for 10 Euros, and an estimated 5.9 million guests consumed 7.7 millions of beer, along with 114 oxen. For more information visit oktoberfest.de