At its outset, GoMAD as a festival continues to unite styles of music that are defined by a nonconformist sensibility— indie artists who haven’t strayed onto the path of a mainstream sound. Attempting to regain its identity as the premier stage for independent music in the country, the third edition of the festival combined an all-adult summer camp experience with an eclectic mix of music, star gazing and some fine spirits at The Fernhills Royale Palace. The perfect getaway for the long Republic Day weekend. With no headlining acts, the two-day festival delivered as promised—a motley of jazz, R&B, rock and folk music spread across two stages of the festival and a cosy camping experience, albeit the nippy morning frost. In the mix
Opening the festival early in the afternoon, the 25-year-old Dhruv Visvanath gave a rather tepid festival crowd a sneak peek of music from his new album, The Lost Cause. It may have been the timing of his set, 2.45 pm, but like the rest of the audience, we were content lazing on the grass, cheering for the musician at the end of each of his songs. Despite being unable to create the ‘festival experience’ with swaying flashlights, the youngster nevertheless delivered a moving performance, ending what could have been a stellar opening with one of his favourites—Four. 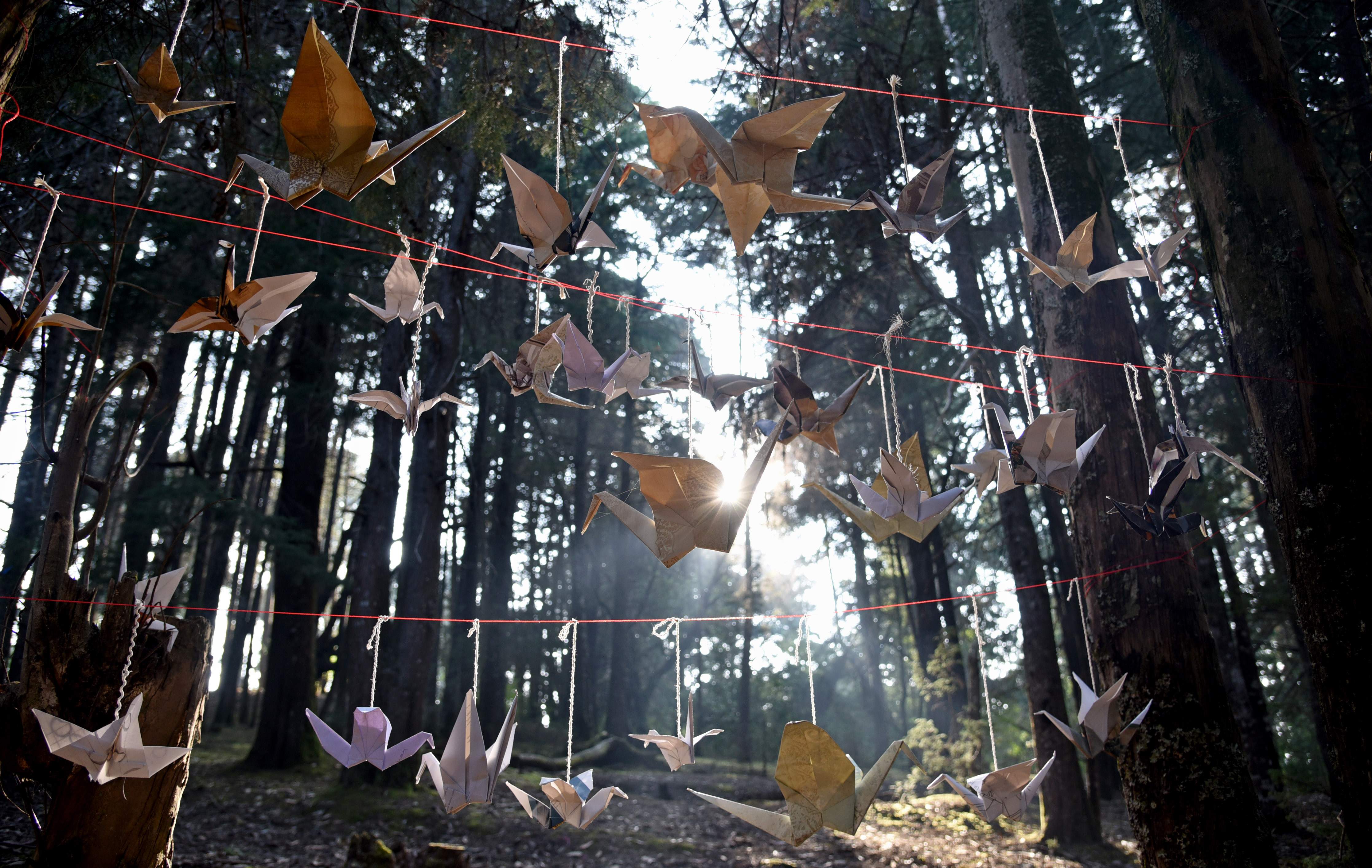 Soon we found ourselves sauntering from The Wood’s Stage (where Dhruv performed) through a portion of the palace forest that is lined by origami cranes and food trucks to arrive just in time at the second festival venue—The Fernhills Stage, for Westblock, a country band whose honky-tonk and swing eventually managed to get the crowds up on their feet and dancing. However, it wasn’t until later in the evening when Bengaluru-based folk-rock band Lagori took the stage that the festive mood finally settled in and drew the loudest applause from the audience. 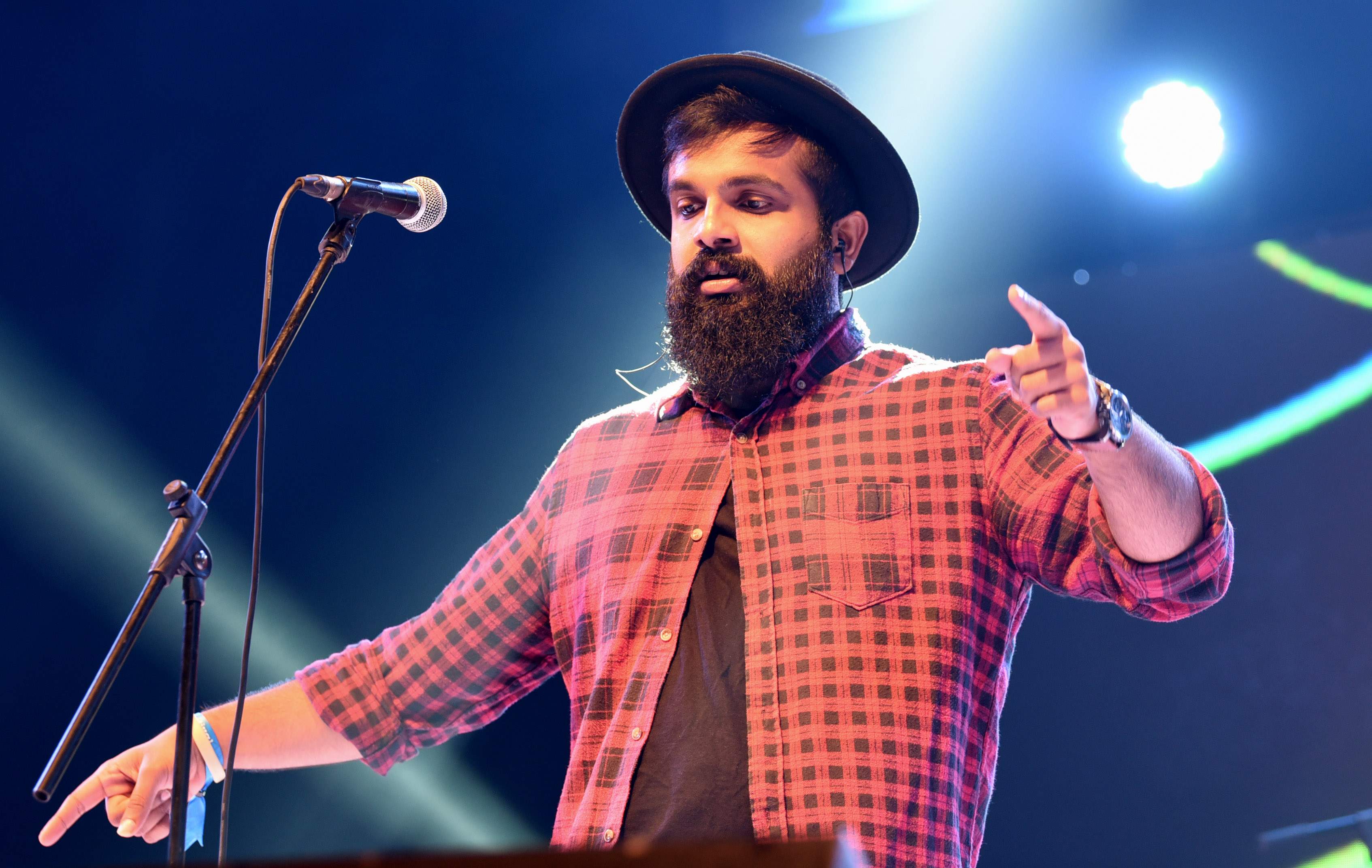 While the town of Ootacamund may not be able to shake off, as the locals call it, ‘the colonial hangover’ with remnants of the British past etched into their colloquial language, musical choices and heritage buildings, we notice that the crowd at the festival had a singular preference: regional music and lyrics laced with rock, pop and jazz. Sure, bands like alternative and heavy-metal bands like Switcheroo and Chaos had a dedicated set of headbangers, but the masses drifted between the festival stages to listen to When Chai Met Toast, Lagori and Parvaaz, a trend that continued into the second day as well.
Swiftly dropping temperatures brought Day 1 to a quick end with artistes and festival-goers seeking the warmth and comfort of their hotel beds over the bonfire, tents and sleeping bags. However, us campers, weren’t headed for any disappointment as our fellow mates brought out their guitars—a Taylor 300 series and Gibson acoustic—for an unplugged session featuring all-time favourites like Pink Floyd’s Wish You Were Here, Oasis’ Wonderwall and Yellow by Cold Play, despite the biting cold. 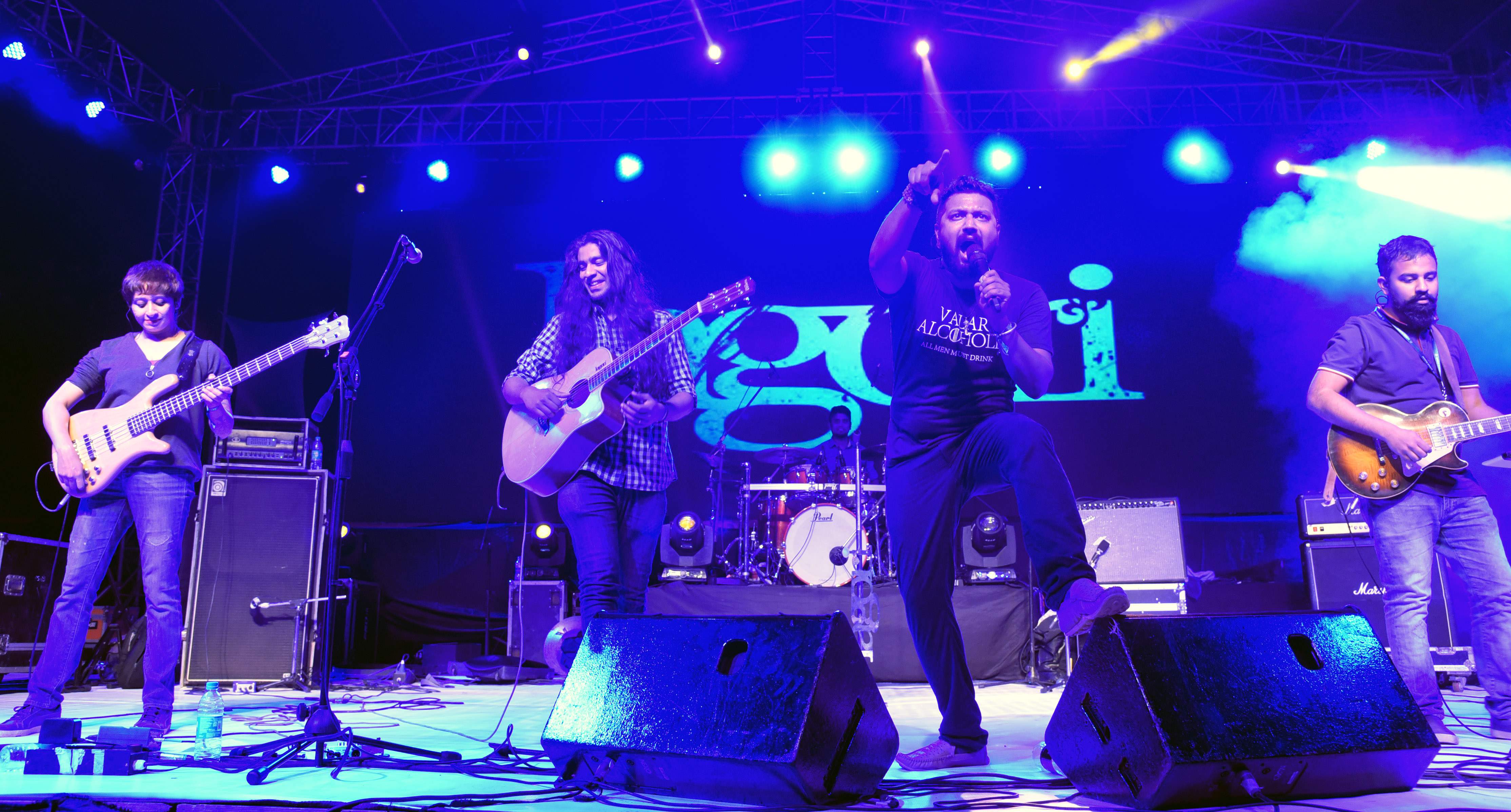 Intent on indie
To set things rolling, Day 2 began with Bengaluru-based band Out of Office, setting the scene for a line-up that was dominated by Carnatic tones. The next act we caught was Bjorn Surrao’s Band , a Chennai-based four-piece acoustic folk band that admittedly sounds better live. We give due props to their lead singer Bjorn whose James Blunt-inspired voice alongside the musical arrangement of violinist Manoj Kumar elevated the whole experience, making their set (songs from their EP, Stories from A Bottle) one of the most loved on Day 2. However, the talent from Chennai did not end just as yet. We caught up with Sachin Yesudas and Durwin D’souza, the lead singer and lead guitarist of experimental fusion rock band Madras Mail, ahead of their set who told us that this was first major festival gig of 2018.The band showed no signs of nerves as they launched into their bass-heavy tunes and sustained guitar solos coupled with the Carnatic-trained vocals of the singer. Needless to say, the band had the crowd chanting “One more song... one more song..” at the end of their last song Thathuva Kadhai. Disappointed, we all had to settle for a selfie with the band, metal horns, raised fists and all. 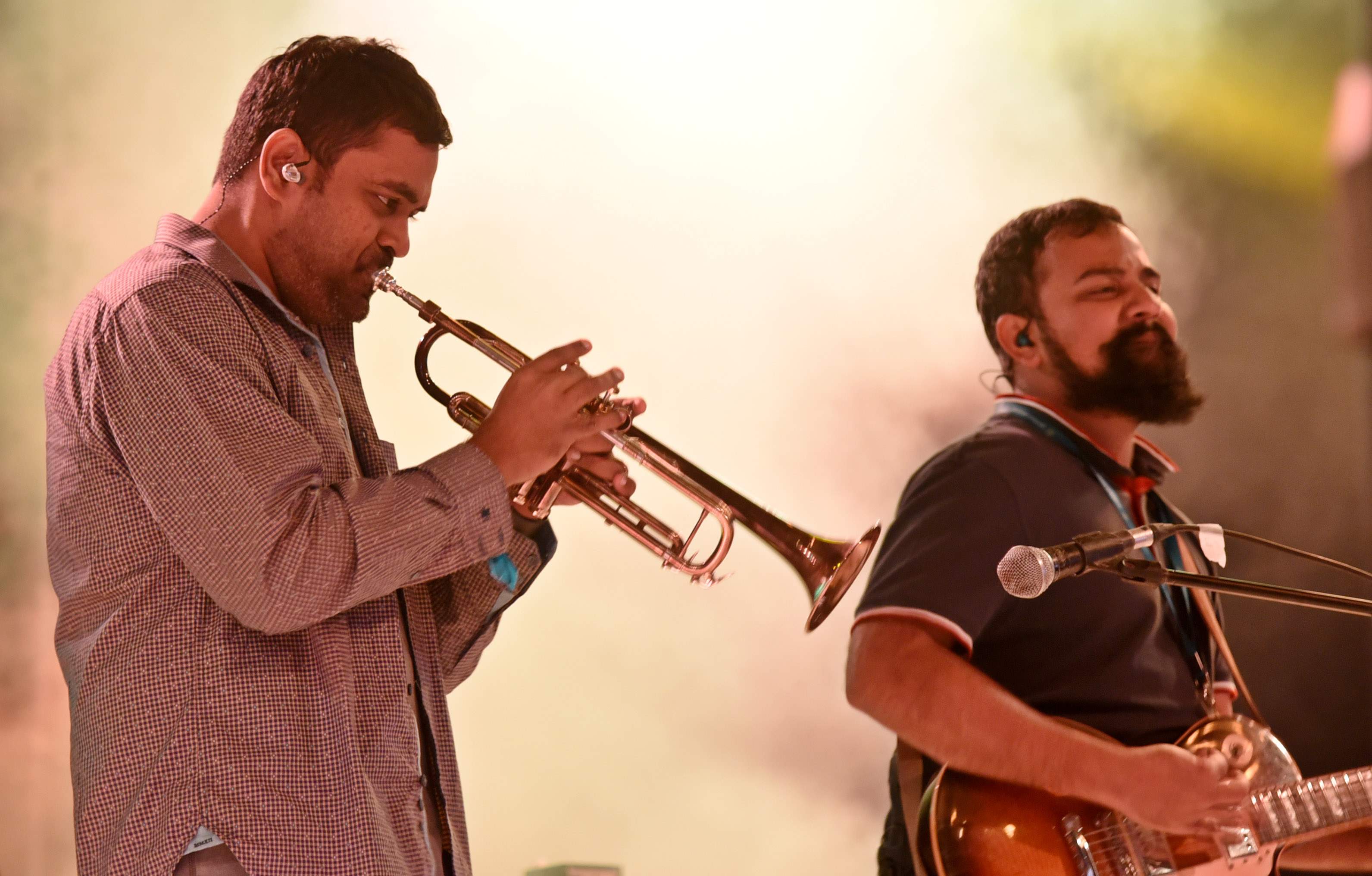 Carnatic chords
Continuing the classical, folk-inspired trip, Masala Coffee set the pace for the rest of the evening, with fans screaming out the lyrics of the boat song Thithi Thaara Thithi They. The only thing that could probably raise the level of elation would be their signature song, Kaanthaa. As if on cue, the Kazoo began, sending the crowd into an absolute frenzy, with cheers and squeals growing louder than the singer’s vocals. 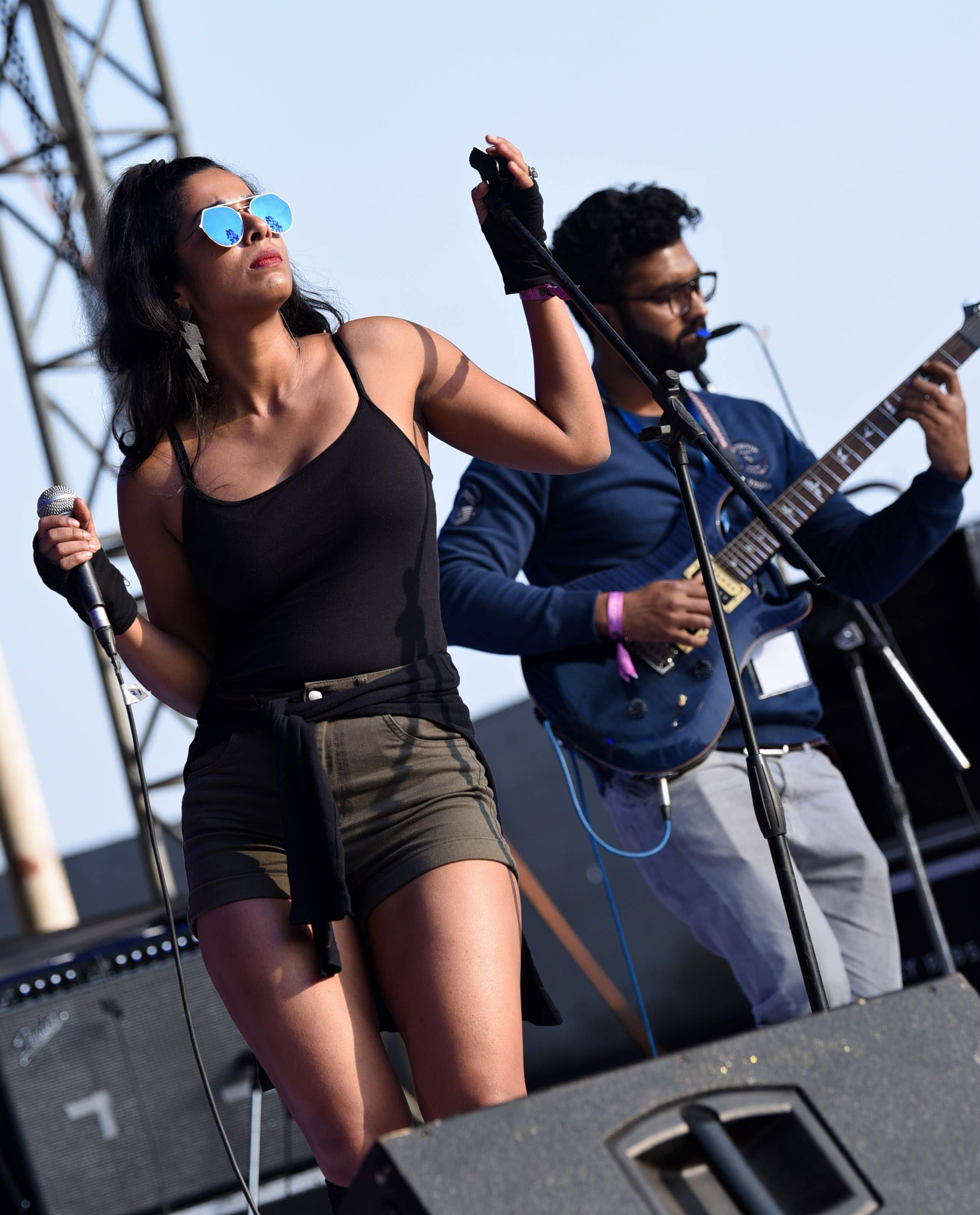 We managed to catch multiple glimpses of Suraj Mani at the different stages, looking pleased as he cheered on bands like Masala Coffee that found their voice through his YouTube initiative Music Mojo. “I have discovered some very special friends through music,” he says with a laugh. An exponent of indie music, the inclination towards folk-inspired music though was not lost on the former lead singer of Mother Jane. “India’s indie scene has everything it needs to become the biggest music industry in the world. And this will happen only once the indie community reclaims its power to revive the local music of the region.”Among all other acts through the two days, the singer’s band Suraj Mani and the Tattva Trip was a highlight.

As the curtains of the festival came down with the reggae act of UK-based band Jeramiah Ferrari, the festival offered indie-music lovers more than just selfies with the bands: heart to heart conversations with their favourite musicians and new friendships formed over music and camping.

The author was at the GoMAD Festival by invitation.