A bridge across genres: Thaikkudam Bridge on their evolution as an experimental band

A lucky fan got to share the stage with Thaikkudam Bridge at their recent Indulge Valentine’s Day gig, held at VGP Golden Beach Resort in Chennai. He was attending his 25th concert of the band and was thrilled when he was asked to come on-stage. This is not an uncommon feature at a Thaikkudam Bridge concert, considering their immense popularity across India and abroad. While most Indian bands struggle to put together one nation-wide tour, organisers are willing to fly out this 15-member band to any part of the world. Fresh from their recent tour of Europe—which included multiple shows in Ireland, Austria, Germany, and Switzerland — the outfit is currently prepping to head to Hong Kong during the first week of March, and then on to South Africa later that month.

In a music industry as unpredictable as today’s, a 15-piece band is no joke. But Thaikkudam Bridge didn’t have to take the long road to success. What started off as a one-time gig for a TV show back in 2013, helped them launch themselves faster than anyone could have ever imagined. 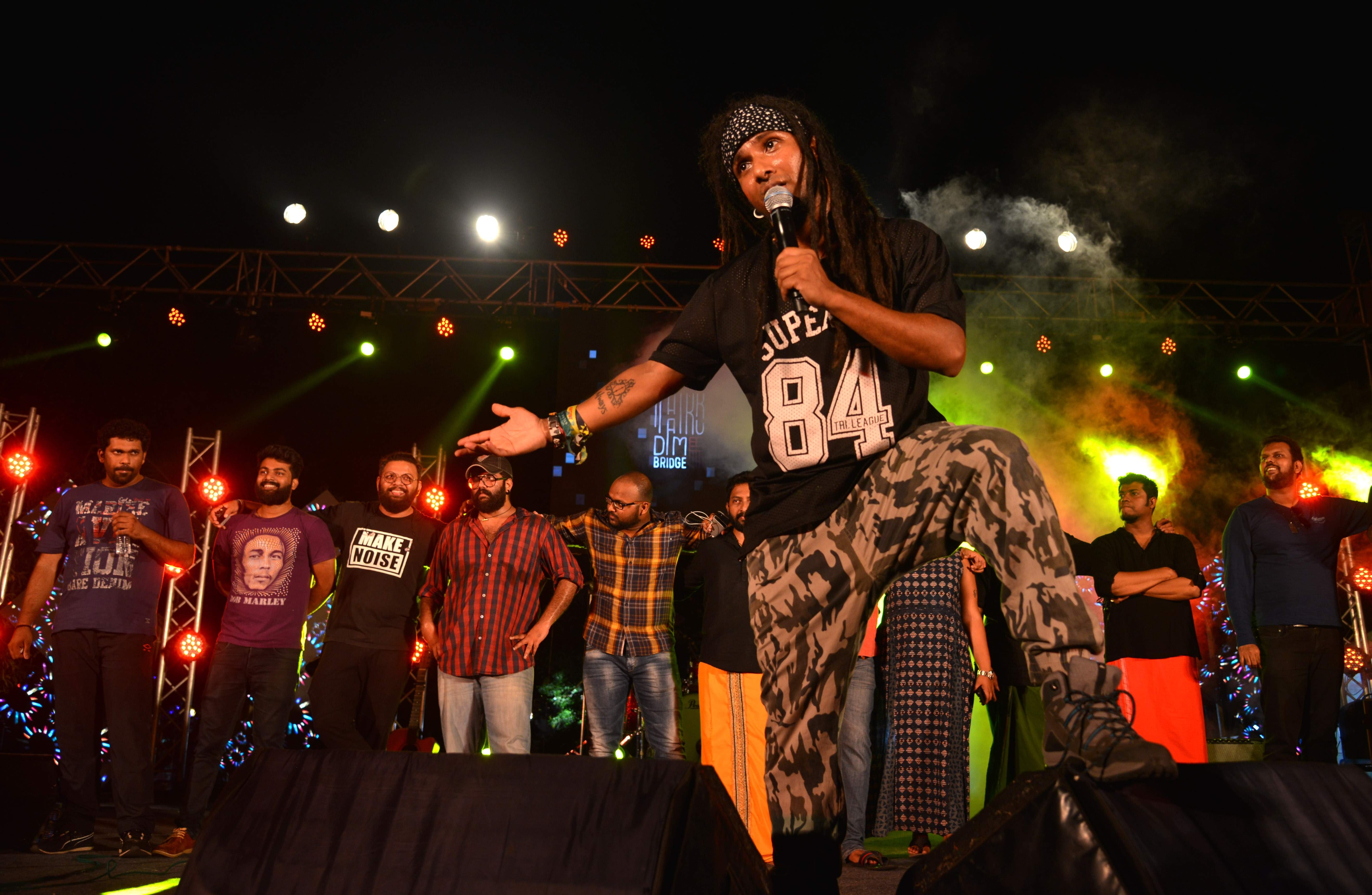 After their medley of old movie melodies went viral, the act came up with a couple of original tracks (such as Fish Rock), which almost became an instant hit and made the band a national favourite. Comprising of a bassist, two rhythm guitarists, a keyboardist, and a drummer, except for the frenzied violin and evocative voices which characterise their tracks, the band’s instrumental set-up is that of a typical Western rock band. However, they don’t fit into any particular genre.

Looking at the band’s songbook, one will find Hindustani, hard rock, a bit of reggae, and a lot more. Having stuck to its multilingual/multi-genre identity from the beginning, Thaikkudam has been evolving into an experimental band. “The most unique thing about our band is that we have seven singers, all of them coming from different cultural and musical backgrounds. There are members who are proficient in classical music, a few who are inclined to rock ’n’ roll, and folk music singers — all together, we’re a complete mix. So, naturally, our performances come out as a multicultural musical act. As opposed to listening to the same person for two hours, our concerts are more engaging because of the diversity in our music,” says Govind Menon, the lead singer, violinist, and co-founder of the band.

Talking about how they met the members of Dream Theater at the Colombo airport by sheer coincidence, Mithun says they were starstruck. “One year ago, if someone told me that I would work with or even meet these legendary musicians, I wouldn’t have believed it. A few days after we met the band, we approached Jordan for a collaboration, and to our surprise, he agreed,” says lead guitarist Mithun Raju. “Our initial plan was to feature just one artiste for the entire album. But one thing led to another, and now the album in itself is a tribute album featuring at least one legendary artist in each track,” he added.

With the kind of energy they have, the shows that the band put on are both a musical as well as visual treat. So are their music videos. When you look at their recent releases, it is evident that music apart, an equal effort goes into their visually impressive videos. They even had Bollywood director Bejoy Nambiar directing one of their tracks (Aarachar) starring actor Aditi Rao Hydari.

“Video is a powerful tool. For albums such as Navarasam, which deals with serious themes such as death, the impact of the video multiplied after it got released. Most of our music videos are related to the lyrical meanings of the songs and it helps convey the theme a lot better,” says Mithun.

Standing far from being labelled as a commercial band, their original tracks talk about politics, corruption, death, and social harmony. “People love listening to the covers of their favourite music. But, if we continue doing what pleases the audience, where is artistic growth in that?” asks Mithun, adding that the band aims to explore more unconventional themes in a way that they get to utilise their freedom  of being in the independent music industry.

“Back when we released our first track in Navarasam called Chathe, we were apprehensive about how the audience would take it, because it was by far the darkest theme we had dealt with. But after seeing the response to that, we became more confident to experiment. The formula for making it work is the backing tune of each track. Be it rock, folk, or heavy metal, we make sure there is some element in the music that the audience is familiar with,” Govind shared.

Currently, the band is busy juggling their gig schedule with the production of their final track in Namah. The album is expected to be released in April.