While the market may be saturated with fests, Magnetic Fields has always set itself apart from the crowd. Munbir Chawla, co-founder and festival programmer, says, ”We have been very lucky to be able to build this community of people who support us and give us the encouragement we need to do more. This isn't just another festival with big headlining acts. This is a contemporary arts and music festival focused on bringing some of the best artists from around the world to India, and to also showcase Indian art and music on a global stage.” He also reveals that this year they are collaborating, again, with Goa-based collective HH Art Spaces for multi-space performance and installation at the festival as well as queer collective, Dragery for the Sunday night party, Paradise. There are also three exclusive festival commissions this year - Fieldlines, with folk artists from Rajasthan, Apex with Spryk and Asrar with Nush Lewis and Riatsu. We speak to some of the artists for a sneak peek into this year’s fest:

Spryk, the brainchild of Tejas Nair, an independent electronic artiste
You’re finally making your debut on stage at Magnetic Fields, how does that feel?
It feels like full circle in many ways actually. I started my journey with Magnetic Fields back in 2015 when I first showcased my installation work ‘Cymatic Tonoscope’ there. I was later invited to showcase my debut VR project ‘Beyond Within’ in 2016. It’s been a really interesting process debuting new projects at the festival but taking the stage I knew would happen when the time was just right. The team behind the festival and I have been in touch pretty much every year since the 2015 edition, and this year when I was approached with the festival commission it felt just right. I’m quite happy that I got to showcase work and visit the festival three times before taking the stage to perform a new show. 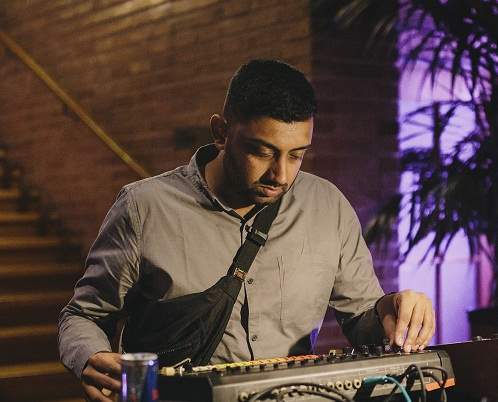 What can we expect from the AV show, Apex?
I can assure you that it will be quite a spectacle to witness. I will be working with Cursorama and Naveen Deshpande to build a unique stage set-up to accommodate custom visuals and a special lighting rig. Most of the elements that we have put together will only be seen in use for Apex at the festival so I would like to invite everyone attending the festival to catch the show.

The concept for the show came from my own reflections as an artist whose work relies heavily on technology. As much as I appreciate the advances technology offers us, I also feel that humans as a whole are so obsessed with being the best, the fastest, the most cutting-edge with every aspect of life that we forget about the drastic impacts of all of these technological developments.

With Apex I wanted to create a body of work that reflects the humble curiosity that leads us to breakthroughs and innovation but at the same time how that obsession to continuously progress to a higher state at breakneck speed can be dangerous.

What are some of the upcoming trends when it comes to the electronic scene in the country?
I notice a huge trend in remixing of archival content from popular media from the 80s and 90s. There is also a huge beats and instrumental hip-hop scene growing steadily.

What music are you currently working on? What can fans expect in 2020?
I am currently working on brand new music for Apex which will also hopefully see a release in early 2020. Under my studio banner, I am working with an independent rapper from Mumbai helping him produce his debut record and parallelly, I have a couple of bits I am writing for an upcoming motion picture soundtrack.

Asrar, a collaboration between musicians Nush Lewis and Riatsu
For those who are not familiar with either of you, could you tell us about yourself and the music you make.
Nush: I’ve been a singer, songwriter and harpist for the past eight years. Been performing in various formats, as a solo artist and I have a band as well. I’ve collaborated with various artists live along with way as well. I’ve released two EPs, Fused and Bridges respectively. Currently working on my third EP and of course, ‘Asrar’ with Shadaab. I’m also a music
educator and run a music education property called OffSet.

Riatsu: My name is Shadaab and I make music under the moniker Riatsu. I make music that is visual. It’ll space you out, transport you to another realm and make you contemplate about things.

Tell us a little bit about how this collaboration came about?
Nush: I worked with Shadaab on one of the tracks on my second EP, Bridges. For the EP launch, we also got to perform the track live which was the opening for the gig as well. It was just a feel-good collaboration. Very straightforward. Magnetic Fields then got in touch with me for a set but wanted me to collaborate with a producer and Shadaab was top on
that list. Riatsu: I worked with Nush on one of the tracks on her last album. I find it extremely important to play with/make music with people I get along and am comfortable with, and Nush is one of those people. It was a lot of fun performing with her at her album launch and at that moment we sort of knew that we wanted to work again in the future.

What can guests expect from your performance at the festival?
Nush: Firstly, just straight up honest music. We’re making sure we play to our strengths and come out with a sound we both thoroughly enjoy. Asrar means secrets in Arabic and the theme was something interesting for us to explore because secrets can be fun and exciting or dark and heavy. We’re having a lot of fun with soundscapes, processed harp lines
and vocals. So hopefully it will cut through well.

Riatsu: Expect a union of two very different styles of music. This is a combination of ideas of a singer song-writer and electronic music producer. Expect a lush body of synth sounds that will merge with FX-driven vocals and harp melodies. It’s going to be thick and it’s going to
be melodic!

What are some of the trends in the music scene in India currently that have caught your eye?
Nush: For me, honestly, it’s seeing people curate venues to various genres of music. If you don’t want to present your work in a big gig venue where the people are just talking really loudly, you have the opportunity to explore smaller more intimate venues where you get a listening crowd. There are so many DIY gigs going around. Although more money needs to be invested in those, it’s nice to know that we still have a listening audience who really are appreciative of your work.

Riatsu: I try and keep myself as far away from these trends as possible, so I am generally indifferent and try and ignore them. That is the only way I can perform and present my art to everyone with complete honesty.

Lo! Peninsula, a three-piece shoegaze/dream pop/psych rock band based in Imphal, Manipur, India.  We speak to vocalist and guitarist Nitin Shamurailatpam
Tell us a little about your music. And your band's name.
We play shoegaze/psychgaze tunes. Nothing intellectual about them, but good enough to keep us excited, we think. The name Lo! Peninsula happened after a discovery of a business card tucked somewhere at the back of my guitar amp (second-hand), and it read The Peninsula Studios. Hence, lo and behold, the Peninsula Studios truncated to Lo!
Peninsula because it sounded interesting. Not sure if it should make any sense though.

What should attendees expect from the setlist at the festival?
So the setlist would comprise of a mix of songs from our debut EP, aka Lo! Peninsula and some material we wrote in the past one year or so. This is gonna be our first time playing at the Magnetic Fields Festival, and we heard it happens in the middle of a desert which sounds quite interesting, so we’re pretty excited and really looking forward to it.

Why did you gravitate towards shoegaze as a genre? Is that something you grew up listening to, or was it an accidental discovery?
Shoegaze is something that happened accidentally. The genre isn’t what drove us to become musicians in the first place. It was only after we got together in 2017 which led to crafting our debut single – ‘Chasing Tidal Waves’ that we discovered the key characteristics of shoegaze and decided to explore our newfound interest towards the genre. What can fans expect from the band in 2020?
It’s quite tricky to say anything at this point since we do not have a concrete plan for 2020, but we’re gunning to hit the studio soon and get new music out hopefully by the beginning of the new year. Keeping fingers crossed.

About the line-up Munbir says “It hasn't been an intentional strategy to push techno this year. Our line-up year on year represents talent that is current, relevant and riding off the back of a significant year both from India and around the world.  It just so happens that with the growing popularity of house and techno a lot of these players, really represent this space. India has always had a big techno fanbase, so I think it's a bit of a win-win.”