A chat with Prince Rama Varma can turn out to be a rich and fulfilling one on many counts. The 51-year-old Carnatic musician — who is an exponent of the veena and is a direct descendant of the former Maharaja of Travancore, Swathi Thirunal — has many stories to share, spanning many decades. “I started coming to Chennai to listen to classical concerts in the 1970s. Those days I had never imagined that I would one day perform myself,” he says, sharing that one of the biggest highlights of his career would be a memorable jugalbandi with his guru, the legendary Carnatic musician, M Balamuralikrishna. “It was an unforgettable evening; he played a viola accompaniment to my singing. It was a very big honour,” he says, adding that among the living legends of today, his favourites include Carnatic vocalists Sanjay Subrahmanyan, TV Gopalakrishnan and Parassala B Ponnammal.
Known for performing classical music and lending his own unique flair, Prince Rama Varma has covered songs by many renowned musicians from different eras, some as old as those sung during the era of the Kingdom of Travancore. He was also one of the first Carnatic musicians to ride the new-age wave of social media in the previous decade. With the help of YouTube — then just a promising video platform that was a pale shadow of the behemoth that it is today — Varma promoted his music through a channel called musiquebox, where he now has more than 30,000 subscribers.

“To be honest, I am very old fashioned. I don’t even have accounts on Facebook or Instagram,” he shares, adding, “But with YouTube, I got lucky. A friend of mine started uploading my videos on the musiquebox channel, and I ended up sharing with him more videos of my performances. Then I started my own channel called Musique4ever, where I uploaded mostly of Hindi film songs from the pre-independence era, which he then uploaded onto the platform. This was in 2007, when I had a dial-up connection instead of broadband, and it would take around 12 hours to upload a two-minute video or so. The connection would be better at night, so I would sleep the entire day and stay up the whole night, waiting for the whole thing to upload!”

Years later, Varma is now a pro in the digital game — not only does he upload videos of his performances, but also puts up online lessons for his subscribers. “For me, it’s more about the personal interactions with my fans, than the likes and comments,” he says, recollecting an incident where a lady in the US bought a pen and engraved his surname on it, and then posted a picture of it as a comment on one of his videos. “I don’t know her and I have never met her. But for her to do that was really a sweet gesture,” he says. Talking about how present-day aspiring musicians apply for playing in sabhas to get a shot in their career, Varma says, “I have never applied in any sabha. I would be sitting at home with maybe three to five concerts a year during the 1990s and early 2000s. The scenario has changed drastically during the past decade, thanks to the demand generated by my YouTube videos.” 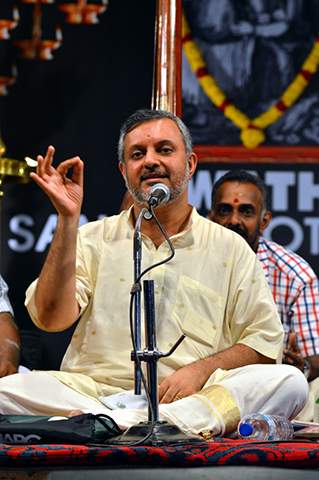 Out of those performances, one of the recent ones were in Hyderabad, for the launch of the Belgian Consulate there. That’s where Mark Van de Vreken, the Belgian Consul General of Chennai, noticed the musician, and he immediately knew whom he would invite to play at the King’s Day celebrations in the city this week. Needless to say, Varma will be presenting standard Carnatic pieces with his violin and mridangam, but the spotlight will be on Jacques Brel, whose songs have had a tremendous influence on Varma. One of Belgium’s most notable singer-songwriters, Jacques is considered to be a pioneer of the French chanson (a genre of lyric-heavy music), and his songs have been covered by greats like David Bowie, Frank Sinatra, Nina Simone and more. “When I first heard Jacques’ songs, they didn’t strike me much. It’s only after I learnt the language that I understood his lyrics (with the help of a dictionary still!), and that’s when it hit me. I had tears in my eyes whenever I listened to his songs since then,” says Varma, adding that he found it commendable that someone with a deep baritone voice like his could express a wide range of emotions with ease. “I would be playing one of his songs, an acapella called Le Plat Pays, which is like a tribute to Belgium,” he reveals, adding that he would be performing in the city again next week.

Having spent 18 years as a student of M Balamuralikrishna, it’s fitting that Varma releases an album that features his own renditions of tillanas (pieces that are played at the end of Carnatic concerts). Balamuralikrishna was a master of tillanas himself, and the ones in Varma’s album will feature pieces from various time periods, including a few royal era ones, composed by Maharaja Swathi Thirunal himself, around 200 years ago. Varma explains, “Even though there’s a big gap (and a loss of historical work) since his death and now, we have to give credit for the revival of that era’s music to Sethu Parvathi Bayi (the mother of the last Maharaja of Travancore) who, in the 1920s, sent musicians to trace and collect as many original compositions of Swathi Thirunal as possible, and compile and publish them as books.” Fast forward to now, and there are music festivals in Swathi Thirunal’s name in places like Charlotte and Los Angeles. How times have changed!

Mark Van de Vreken, the Belgian Consul General of Chennai, should be given his due credit for inviting Varma for this performance. It all happened at the launch of the Belgian Consulate in Hyderabad earlier this year, where the Honorary Consul there, GV Prasad, invited Varma to perform. Talking about what drew him to Varma, Mark says, “He is a big fan of Jacques Brel, who is, in my opinion, Belgium’s greatest singer ever. And Varma’s performance that evening was quite special. That’s why I thought that he is the person whom we would want to see at the King’s Day reception.”

For those who are new to Belgium’s rich musical culture and want to initiate themselves into their music, Mark suggests musicians like 1960s legends like Rocco Granata and Salvatore Adamo and contemporary bands like Hooverphonic, plus DJs namely Dimitri Vegas & Like Mike (who also performed in Hyderabad recently).

Talking about Carnatic and other Indian influences in Belgium music, Mark refers to the Belgian dance collective Bollylicious saying, “They bring European interpretations of Indian dance forms, with a focus on Bollywood as well (hence the name). One of the dancers is originally from Kerala and
presents South Indian dance forms too,” adding that they have performed for PM Modi and the Belgian King and Queen.

As for this year’s King’s Day celebrations, the main event is the King’s Day evening, along with Varma’s performance. “There will also be special Belgian dishes on offer, as well as waffles, Callebaut chocolates and AB InBev beer,” he reveals.