Bob Dylan’s handwritten lyrics of The Times They Are-a Changin are up for sale at $2.2 million

A handwritten lyric manuscript of Bob Dylan’s 1964 protest classic The Times They Are a-Changin' is up for sale at $2.2 million — a sum that could set the record high price for song lyrics.

The lyrics are written on a single sheet of lined paper in Dylan’s handwriting and reveal numerous discarded lyric fragments and notes.

The manuscript also has an entire verse crossed out on the right side of the sheet that includes the lines, “Come all magicians of illusion and deceit/With 100 16 weights tied to your feet/Get up, get up stand on your feet.” 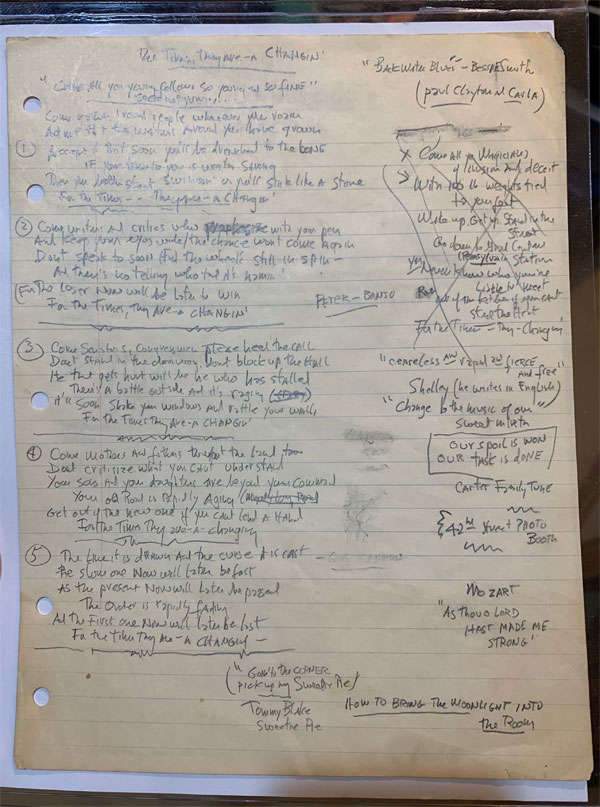 Now owned by an anonymous private collector, the lyric note was originally owned by Dylan’s manager Jeff Rosen. It is being sold via Moments in Time in Los Angeles. Gary Zimet, the owner of Los Angeles-based autograph dealers Moments in Time, said, “It's not an auction. It's a private sale. First come, first served.”

Up for grabs are also the lyrics for Subterranean Homesick Blues for $1.2 million and Lady Lady Lay for $650,000.

Dylan's handwritten lyrics to Like a Rolling Stone fetched a world-record $2 million when they were sold at auction by Sotheby's in New York in 2014.