Avina Shah was merely three when she performed on the stage for the first time. Now 33, the London-based YouTube artiste who is known for numbers like Playboy, Tere Bina and Dil Dewaana and who has shared the stage with Shah Rukh Khan at the Incredible India Concert in Holland in 2011 drops her first Punjabi single Husan Di Rani. With 1 million followers on YouTube, the artiste whose songs are usually based on social issues (Tere Bina supported the victims of domestic abuse) takes on the social media influencers with light humour in her latest song. Describing the song as fun and energetic she talks about giving a reality check to social media addicts, being ready to take up new challenges and dropping more songs this year. Excerpts:

What was the idea behind creating Husan Di Rani?

Firstly, I like spreading important messages through my music and I have realised that the impact of social media on our mental health is pretty crazy. We are sucked in the illusion of perfect life projected on social media and I wanted to create a peppy song that would highlight, in a fun way, the reality behind the rosy posts online. And, I felt the title ‘Husan Di Rani’ was a great fit for the concept.

This is your first Punjabi song, how do you think you have grown as an artiste?

I’m a big fan of Punjabi music and it was always a dream to be able to record a Punjabi song. I like to challenge myself in some way through every release as that is how one can grow as an artiste. Over the years, I feel I have developed in so many ways – not just sonically, but also my personality and confidence have grown exponentially. Being in the music industry takes a lot of courage and I’ve learnt a lot of lessons along the way. As an artist, I feel that I’m finally ready to take things to the next level. 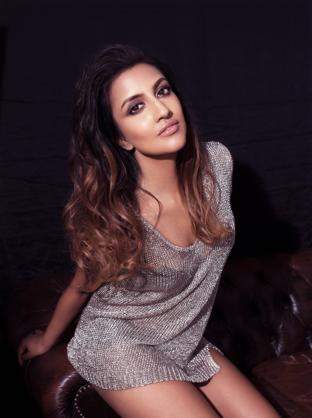 Do tell us about how you got started.

I come from a musical family. My first stage performance was when I was only three-years-old. My elder sister Hemina and my dad are also very good singers and they inspired me to follow the musical route.

What has been the biggest reward and what keeps you inspired?

Music has taken me around the world connecting with people from different backgrounds. It’s music that gave me the opportunity to share the stage with a star like Shahrukh Khan at the Incredible India Festival in Holland, apart from performing live at Las Vegas and for the royal family of Oman in Muscat. It’s the love and appreciation from fans that keeps me inspired.

You also share make-up tutorials. Are you planning any other segments via social media for your fans?

I love to surprise my fans by doing something new and different every time. Since I have my own cosmetic brand Faces by Avina here in London, I have been flooded with requests for tutorials and since I have time now I decided to share one. I enjoyed making these video and fans can certainly expect more.

After Husan di Rani, what can we expect?

I have more messages that I want to give through my music and I have five songs releasing this year, so I’m super excited to share them with the world soon.