The Amithias Project was formed as a result of a long-standing friendship between two very different and talented musicians — German trumpet virtuoso Matthias Schriefl and Indian flautist Amith Nadig. They first met in Bengaluru in 2009 at a concert, and after a series of meetings and mutual sharing of musical knowledge, they decided to launch a fusion group that aimed to blend jazz harmonies with Indian ragas. Matthias is also the founder of an older group called Shreefpunk, while Amith is the only one from the country to have been invited to perform at the Dusseldorf Church Organ Festival and Jazz Art Festival in 2016. Along with konnakkol exponents, Vinod Shyam Anoor (mridangam) and Sunaad Anoor (khanjira), plus bharatanatyam artiste Nivedita Sharma, The Amithias Project will perform in the city at Goethe-Institut tomorrow. Ahead of the show, we spoke with Matthias and Amith about what makes their partnership tick, and how they tried to harmonise their sounds with classical Indian dance. Excerpts:

​Before establishing The Amithias Project, what were the challenges that you both faced as musicians?
Matthias: When I first played with a south Indian band, I just didn’t know what happened during the concert. It was just like as if my whole musical world collapsed and suddenly there stood in front of me a big wall that I couldn’t climb — I didn’t understand how the south Indian musicians managed to perform such heavy rhythmical syncopations. My understanding was very different and it was very challenging for me.
Amith: For me, the challenge was to deconstruct everything I had learnt and apply my practical knowledge in a whole new realm of jazz music. Both these challenges were daunting and needed hours and hours of focussed practice.

​How would you describe the soundscape of the band?
Matthias: Let’s say, we make true world music! However, for Amith, drawing inspiration from his own culture was not satisfying enough for him. So, here, he also plays samba, blues and mambo pieces and he even yodels in an Indian fashion. We are constantly trying to discover the connections between jazz and Indian ragas as well as mutual grooves around the globe. It’s fascinating when a  complex of South-Indian rhythms and European harmony is created. Due to the herewith demanded mutual research, our own horizons must be set aside. 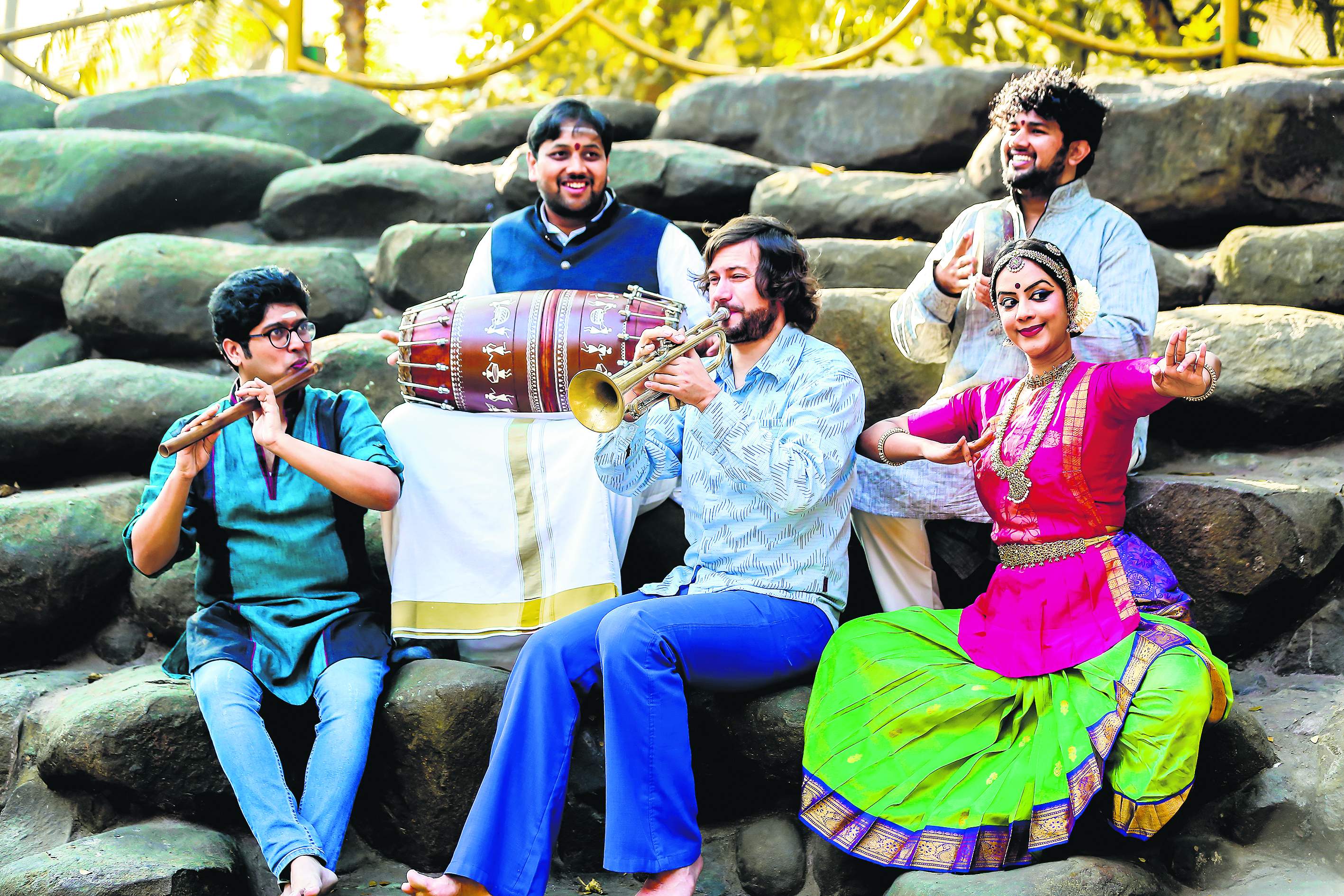 ​What inspires you to make music?
Matthias: We compose and write down new music all the time. It can be inspired by a bird, or by a feeling or something that happens in my life. For me, there is only good music and bad music. I don’t care about the styles at all — but when I hear a mambo, which is a Cuban rhythm, which fits perfectly with mridangam, we will not hesitate to make it true! Likewise, we are not afraid of rearranging a traditional bharatanatyam piece called jathiswara into a complex jazz treatment.

​How challenging is it to blend bharatanatyam with classical fusion music?
Matthias: The interactions by Nivedita bring a completely new flavour. Sometimes we play alpine sounds to accompany her steps.
Nivedita: It is really challenging. My tutoring was under a very traditional lineage. Blending jazz music with bharatanatyam might not be very impressive to many. So keeping everything in mind I have tried to keep my tradition in hand and blend in the best way possible. All thanks to the meticulous training that I was lucky to have had that made me understand the music and execute my movements easily. But there is no end to learning. Every rehearsal makes me feel that I gave something a miss and that’s how complicated this music is. But I’m so lucky to be working with serious-minded and yet down-to-earth international artistes who are always ready to help me with any uncertainty.

​Is there a new album in the works?
Matthias: We will soon produce an album with Frankfurt-based Radio HR Big Band very soon. You can already see some parts of our collaboration on YouTube, but on the CD it will sound even much greater.