'Sufiyum Sujatayum's background score is the best I have ever made': M Jayachandran

Malayalam's first OTT release Sufiyum Sujatayum hit the screens last Friday and has been much talked about ever since. While the Aditi Rao Hydari-starrer may have received a lukewarm response, it's not argued that the surreal quality of the romantic musical is something that stays with you even after the first watch. To say that the music in the movie elevates its mood would be an understatement. The songs and the background score make for the very soul of the film and ace music director M Jayachandran believes it's one of his finest works. Having started his career in 1993, the National Award-winning singer/composer has worked in more than 100 films including Ennu Ninte Moideen, Pranayam, among others. As the Kerala-based musicians latest work continue to make waves, we speak to him over a Zoom call about creating songs that stick, completing over 25 years in the industry and future projects.

How are you going about the lockdown?

The lockdown has changed everybody. I have learnt to do all the household chores including cleaning, doing the dishes, basic cooking, all the things that I'm doing for the first time, things I should have learned regardless of the lockdown (laughs).

Ever since the songs from Sufiyum Sujatayum released, it's been all the rage on social media. What is the feedback you have been receiving?

The responses that I have been getting are phenomenal. The song's connection with its theme, the genre of it, all of that makes it unique. Not just the listeners but many musicians have been calling me, even the ones who are usually not in touch with me, to tell me that the songs are special. I'm amazed that a lot of cover versions are out already. It's only been a few days since the songs were released and yet I have come across many choreographies of Vathikkal and many instrumental and vocal covers as well. That way, I'm happy that the song is very well received and that everyone is singing it along.

Do you realise that a certain song is going to touch the hearts of millions while in the process of making it?

Yes, especially in this case, I knew it from the beginning that this particular song was special and that it has a certain frequency that can engage with the listeners. Even while composing the song I told Harinarayan (the lyricist) that there is something different about this. I don’t know what it is. It has got a different soul to it. And so I was sure that the song will stick with the listeners even after hearing it for the first time.

What is your formula for making a good song?

I'm someone who thinks with his heart. When you communicate a thought from your heart, I believe, it will reach hearts. Whether it's something you say or something you sing. As a musician, my tool is my composition. And if it comes from your heart, certainly it's going to engage with other hearts too. Simplicity is the highest degree of sophistication, that’s my mantra. I want my composition to be simple. All my tricks are consciously hidden within that simplicity.

One of the most unique things about Sufiyum Sujatayum is its background score. I think it's one of the best that I have ever made and I thoroughly enjoyed the process of making it. We have brought in a middle eastern, Arabic genre. We even had some musicians from Istanbul, Turkey collaborating for the music. It was a different experience altogether. I want to thank my producer, Vijay Babu for giving me the freedom, in all respects, to record like this.

How much of the movie’s story and about the characters do you need to know before creating music for it?

While composing music for realistic stories, it's important to get the ambience of the movie right. Even in this movie, it's set in dreamy places called Mayilanjikkaadu, Mulla Bazaar, Jinn mosque...and tells the story of a Sufi who falls in love with a mute girl. If I need to get into the mood of something like that there is a need to connect with the script. I need to know how the scriptwriter and director have envisioned it. So I took my time and read the script. Tried to understand the situations of each song, and learned the mood of the story. It was after all that the songs were created. 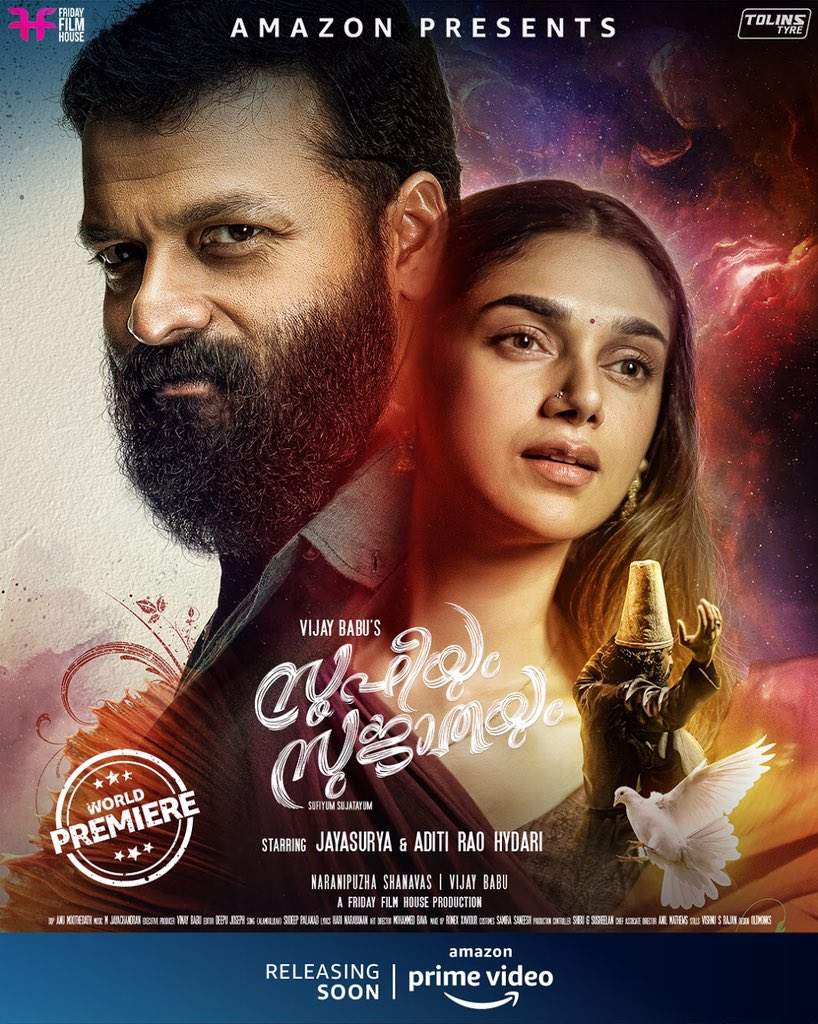 What was the brief given to you by the director?

Shanavas, the director of the movie, made me listen to some music by a Turkish ensemble and a few Arabic composers. He told me he wanted the movie's music - the songs and the background score - to be in that genre. At the same time, he also wanted the songs to leave a memory in the hearts of the listeners.

Have you collaborated with international artists before this?

No. This was my first time working with international musicians. It was an unforgettable experience. They were very much involved in the process. They also said the music is different from what they usually play there. I find that an honour.

Having completed almost 25 years in the industry, what has changed for you?

Well, I have become 25 years younger (laughs). Musically and as a human being, I feel way younger at heart. And that’s why I can still make songs like these - to get into the hearts of people and bring the element of romance in the songs. At this point, my passion for music is at its peak. Even 25 years later that fire in me, the love for music is the same, if not more.

As for changes in the field, there have been many, especially in the Indian film industry. Now there's a question of why you need a song in the movie. There are filmmakers who use the music in a film as an instrument to tell the story rather than have it just the sake of it. The way songs are being conceived has changed, the orchestration is different, the concept of film songs itself has changed.

Do you feel that creating music for films deny you complete creative freedom?

What you said right now is the biggest challenge that any film music composer faces. To keep your signature intact in the music even when you create it for a particular situation given by the director is the most important thing. That's the challenge that I take up and also what I like the most. Yes, we are given the situation and the music has to be approved by the director and yet, you try to keep your presence felt in the music. That's the beauty of it, the collaboration. I don't see it as a limitation.

I like to think that I'm given a playground. But using my talent, I get to decide where to take the ball, where I should be static or dynamic and when I should hit a goal. It’s not an easy task.

Listeners often feel that every song you make is rendered by the 'right' voice. How do you pick your singers?

I never fix a singer before the song is made. Only after I'm done with the music, I think of a voice that's fit for the song. Nowadays I even go looking for the 'right' voice. I listen to many and then pick the perfect one. After doing Vathilkal song, I didn't have a clear idea as to who I should give it to. But I felt that it has to be someone new. So as suggested by my friend and singer Ravisankar, I listened to a few songs by Nithya Mammen. And I immediately felt that she would be the right choice. Similarly, singer Arjun Krishna who’s also sung in this movie is extremely talented. I’m sure there's a bright future for him.

Do you compose after the lyrics are written or is it the other way around?

This song in Sufiyum Sujatayum was written and composed simultaneously. I believe only if the lyrics and the music are made to complement each other, the song will turn out to be perfect.  You can see the making video of it on YouTube. That is exactly how it was made.

The songs from Sufiyum Sujatayum are picturised beautifully. Do you feel bad the viewers didn't get to enjoy it on the big screen?

For any artist who works for cinema, their dream is to see their work on a big screen. There's no doubt about it. My producer has said that we would also have a theatrical release when the time is right. So hopefully in a later stage, it will happen. Though certain aspects like when the cinema halls can be open, even if they do, will people still visit theatres, all that remains uncertain. We just don't know as of now. But still, there is a dream.

But that said, what I like most about OTT releases is that we get to see beautiful content - the kind that is unlikely to hit big screens - being received so well. For instance, there is Amitabh Bachchan’s Gulabo Sitabo. It's a wonderful film and people are raving about it. But we don't know how well the movie would have done at the box office. But when you see such stories in the comfort of your home, it somehow works. Also, when such good quality content is being produced, it's equally good for the musicians who work in those projects. As more films get specifically made for OTT, a lot of artistes also get work. So there are films for theatres, films for OTT, altogether is good for everyone.

Among the contemporary musicians, whose work do you follow?

I love the works of D Imman. He is a fabulous music composer and his songs are so beautiful. I follow all his compositions. Kannana kanne sung by Sid Sriram is one of my favourite songs. Similarly in Malayalam, the song Aaradhike done by Vishnu Vijay is one of the best songs I've heard in recent times. It's a beautiful melody that has been crafted to perfection.

Tell us about your future projects.

There are quite a few projects in the pipeline. One is for a movie by director Vinayan called 19th Century. Set in 1835 Southern Kerala, it's a mammoth project. There's another movie I’m working on called Randu and another one starring Jayasurya and Manju Warrier. There are a couple of other projects as well.