Singer, songwriter and composer Mohan Kannan started his career in 2007 with one of India’s most-loved and widely followed bands, Agnee. As lead vocalist of the band, he delivered a number of albums. His first step into Bollywood was with the Salman Khan and Ajay Devgan-starrer, London Dreams. He also worked playback for the song, Khaanabadosh. Since then, his journey has seen an upward graph with Chaandaniyan from 2 States, and Yaariyan from Cocktail, to name a few hits. We caught up with Kannan to speak about his latest digital project, upcoming tracks, and other future plans. Excerpts:

Tell us about the Soundcheck series?
The series started with an impromptu solo jam with Aaj Jaane Ki Zid Na Karo and Phir Le Aaya Dil. But I decided to release this video anyway as a thank you gesture to all the people who had joined my live session the previous night and were patient through all my technical glitches. They seemed to really enjoy it. Then I did a follow up of this with the concept being the same — to start something and go wherever the mood takes me at that time. This ended up being a long medley, starting with Kalank from the film of the same name, then moving into Saanware by Nusrat saa’b from Bandit Queen, and then to a composition that I had made a long time ago (but never released) to a sher (couplet).
The final one was Silsila, a song we’d made for Raghu’s exit from MTV Roadies. The length of this video made me think that this would not really be heard much, but I turned out to be wrong and this ended up becoming more popular than the first one. I think this is more to do with the honesty in doing whatever I felt like rather than singing to a brief or to an audience.. as well as the fact that the setting is intimate, and it’s almost like I have invited everyone over to my living room. Considering the fact that I love having people over, I guess this is my way of ensuring the same during this difficult period.

What is the next song you plan to put up on soundcheck?
There is a song called Sadaa, originally composed for the film Shala, where my mother Smt. Vasantha Kannan had played the violin on the song (my first composition that gave me this opportunity). My sister from Calcutta, K Srividya, and I had done a version each of this song back in 2012 and both got released at that time, and this song was the reason we won our first Video Music Award in 2013.
For the next video on soundcheck, my sister and I are getting together to do a classical take on Sadaa with Carnatic swarams (Sargams) being sung to the song. My sister has a unique way of singing swarams that blend in with the phrase of the song they’re being sung to, and we’re going to explore some of that in this.
My sister and I are also exploring a concept called ShrutiBhedam (called Moorchana in Hindustani classical music) which is akin to moving modes in western music.. by changing the base note of a raag, with the same notes, one finds another raag. In the case of Sadaa, the song is originally composed in GujariTodi or Shekhara Chandrika in Carnatic, but with Moorchana, this raag transforms to KadyuthaGanthi (very close to Jog in Hindustani music).. and we’re going to try and do a few variations of both of these raags in the sargam. I’m quite excited about it and hopefully, it’ll turn out to be nice!

Tell us about the new track that you plan to come out with for Agnee?
The song is called Kya Mai Kya Tu and is around the philosophy that we are all so much better together than alone, it’s about compassion and feeling for each other. It’s written beautifully by Amitabh Bhattacharya. This is Agnee’s first song release in the last five years, so we’re very excited for it, and this is just the first of many that will come in the next few months. Musically, this is the first time we’ve explored the idea of two drummers playing the kit on one song, an idea brought to us by Hrishi, our drummer, just before the shoot, and so you’ll see Hrishi and Varun both on drums, Chirayu on bass and Koco of course on guitars, mandolin, oud and various other parts he’s programmed and produced for the song. We also had our old friend, John Jaideep Thirumalai, come in on the bass recording and he’s brilliant as usual. Finally, the track’s been recorded at our friend and workmate Tanay’s studio, Wow & flutteR, by Rupak the engineer, and mixed and mastered by the wonderful Enrico ‘Kikko’ Sesselego, the globe-trotting Italian madman who mixed our track while he was in Japan.
The video’s also been directed, produced and shot beautifully. We had a fantastic team with Shouvik Basu’s company, Ten Films, and Cynara Rebello taking over the production, Tisha Mehra directing along with the co-director Rishabh Dubey, Akshay Rajput coming on as DOP, and Jayant Hadke handling the post-production. and each one of these people is an expert in their field, so we’re super lucky to have them on board.
This song is also the official theme song of the short film, Talk, written and directed by Sumit Singh Sandhu, and the film has already received rave reviews, selections and accolades in festivals the world over. We’re excited about the film which, in Sumit’s words, “is about a conversation that never happened”, and can’t wait for its release in India for everyone to watch as well.

We hear that you have also contributed to a Bengali song on the pandemic, share a little about it.
This is a song called Shahosh Diyo and is composed by an old friend, Indraadip Dasgupta. Indraadip and I have collaborated very often for his Bengali film projects in the past.. this is the first non-film song that we’ve worked on together. I’m super glad to be part of this song, along with other wonderful musicians and singers. It’s always a pleasure to work with Indraadip and doubly so when people of the talent of Kaushiki Chakraborty are also on board.

During the pandemic most of the artists are facing difficulty when it comes to working, how occupied have you been?
Strangely enough, I’ve been seriously occupied with work and releases this entire lockdown, and so I can’t complain at all. The advantage of being a composer is also that you can use this time to your creative advantage if you choose to. This time has also helped me learn new stuff on video editing etc.. and I’ve been enjoying myself, to be honest. I do miss meeting friends, and hopefully, that will be possible again soon.. it’s already started in a one on one fashion with close friends I trust to be safe, and I hope things improve from here on.

Since everything is now going digital including launches, do you personally think that this could affect the music industry on the whole?
This could be a boon for a lot of musicians since now the playing field is practically level for film and non-film music… everyone has the sole option of digital right now. Added to this, people being confined to their homes for the most part, which allows for a higher propensity to consume content, so I’m hoping musicians will take the advantage of this and release more of their music. We’re already seeing this happen. Live shows are a serious gap that will be very very difficult to fill, and again,
this affects the biggest to the smallest of artists.. some digital shows will happen, I’m sure (some already are) but it’s very difficult to replace the feel of a live concert happening in front of an audience and that’s the part that I’m sure most musicians sorely miss, both in terms of a feeling and happiness, as well as a revenue source. 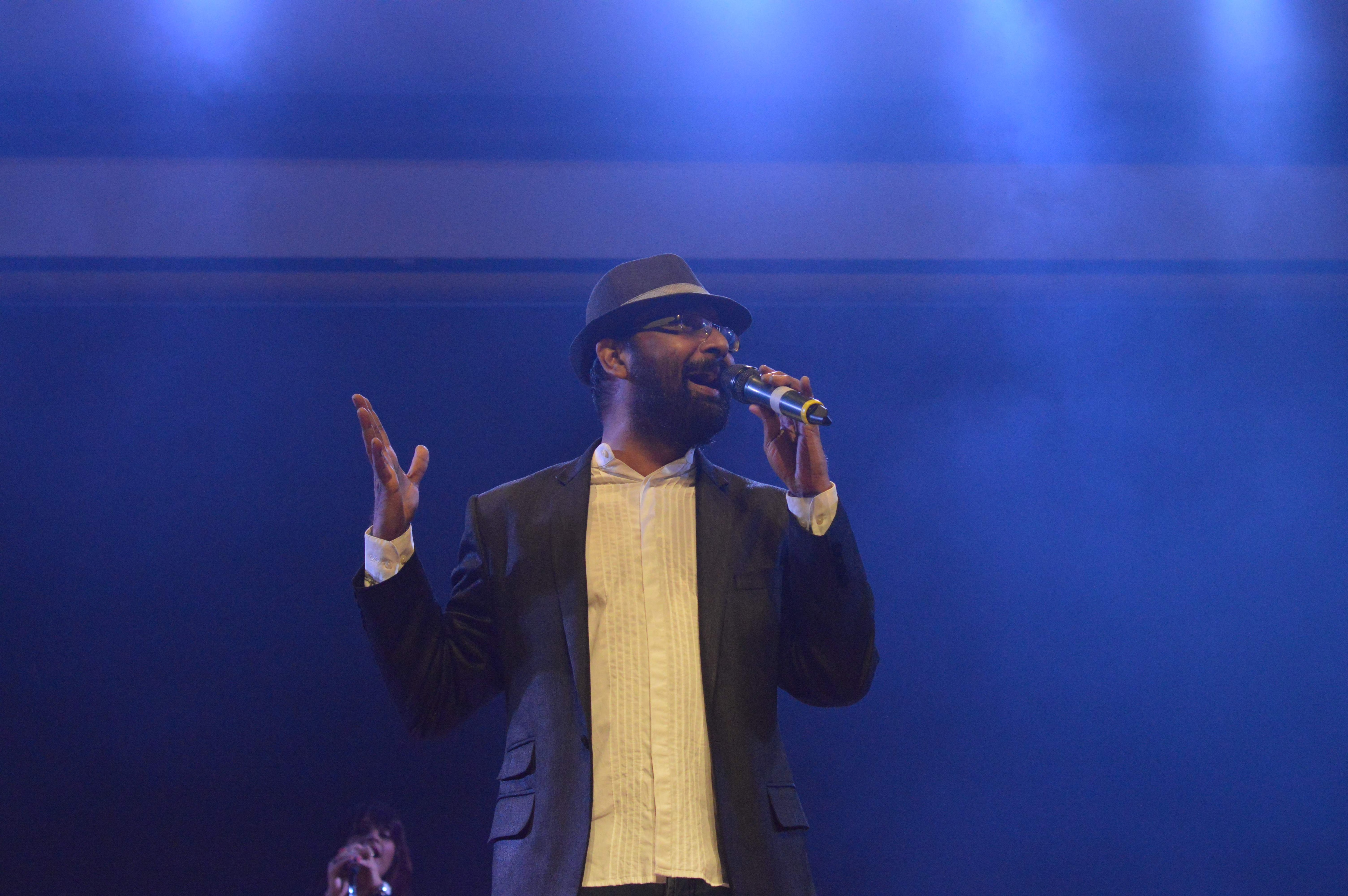 What all can we expect from Mohan Kannan in the coming months?
From the Agnee side of things, we’re super excited about our song as well as the MX Player show, Times of Music. We, along with Amit Trivedi, have featured on the two finale episodes of this show, and we hope we’ve done justice to the two iconic composers that we’ve chosen to pay tribute to. I have just watched the first three episodes of the show that are out, and Ajay Atul’s tribute to Kalyanji Anandji’s Zindagi Ka Safar has impacted me deeply. I was moved to tears the first time I saw and heard it (including the encore impromptu performance by Ajay) and since the last two days, I have practically forced people to watch it. I think they have taken the concept of the show to another level.. and it is heartwarming to listen to them and a huge honour to be on the same show. I hope people will enjoy watching our tributes too.
From my individual side, a song I’ve sung for the film Chaman Bahaar, has just released it’s called Kaand and composed beautifully by Anshuman Mukherji. It’s very different from the other songs one would normally associate me with, and I hope people like it. I’m already hearing super things about the movie and am hoping to catch it soon. The Bengali song Shahosh Diyo has also released just now and people seem to be enjoying that too.
My friend, Amartya Bobo Rahut, had called me many years ago to sing a beautiful composition of his, Barbaadi, for the film Aurangazeb, he has just recreated the song in an unplugged fashion, and the video for that is just releasing too. I love the composition and I think this version is beautifully done by him and the musicians. The video’s also shot and edited beautifully and I’m looking forward to sharing that with everyone in the next couple of days too!
Finally, after the Agnee release, I will be working on my solo song releases. three of these songs are already ready, and I’m just working on the video and the release side of things, so hopefully, I’ll be able to catch this year in showcasing the different kinds of songs I like to create.