THERE’S NO SHORTAGE of women DJs in India. However, only a handful of these female artistes actively participate in the country’s burgeoning underground electronic music scene. Sanaya Ardeshir, Kini Rao, Ma Faiza, and Pearl are among the few.

Three years ago, that list of femme luminaries grew longer with the arrival of Sanjana Rajnarayan. The Chennai-based youngster, who performs under the moniker Madm, quickly climbed the charts with her eponymous debut recording. It led her on a nationwide tour alongside city-based duo Sapta — who helped her produce the album.After which, the singer- songwriter stepped away from the scene. Until now.

“Right after the release of my debut album, I packed my bags and moved to Mumbai,” begins Sanjana. She adds, “I wanted to take the time to refine my craft, produce my own music and find my ‘controlled yet chaotic’ sound. I was apprehensive about my sabbatical affecting the initial momentum I had. But I reminded myself that I’m in this for the music, and my momentum has no meaning without quality music.” 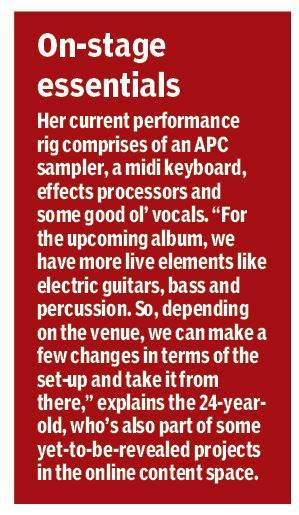 Now, Madm is back on home ground and wrapping up the last 10 per cent of the work on her next album. Yet, she still found time to collaborate with some other major industry players. Easy Come, Easy Go — a single from Mani Ratnam’s Vaanam Kottattum that she worked on with vocalist Sid Sriram, guitarist Sanjeev T, and drummer Tapass Naresh — went viral on YouTube with over 2.56 million hits.

“It happened by chance. Sid was kind to feature me in his debut film as a music director. He’s a breeze in the studio and we ended up having fun while recording a baller of a track,” shares the artiste who featured on Apple Music’s: The A-List (Indian Pop category).

With music videos and another trio concept album currently being tinkered on in the studio, this vocalist has got her hands full at the moment. She hasn’t thought of hitting the decks! In fact, singer-songwriters generally don’t take the DJ leap. “Both Marti Bharath (of Sapta fame) and I felt that the music demands the set-up and not the other way around. We felt that a compact set-up with live elements would elevate the experience and also do justice to the record,” Sanjana concludes.